Lord of the Rings star Viggo Mortensen is apologizing for dropping the n-word during a panel on his latest film on race in the Jim Crow South.

Mortensen, who rose to fame playing Aragorn in the fantasy series, was speaking at a Q&A panel following the screening of his latest film Green Book, which is about interracial friendships.

The crowd was shocked upon hearing the Oscar-nominated actor, 60, use the racial slur and ‘the oxygen immediately left the room’. Yet the Wednesday panel in Hollywood continued on as if nothing happened.

‘For instance, no one says n****r anymore,’ Mortensen said while discussing race in America, according to guests at the panel.

Viggo Mortensen, 60, has apologized after he used the n-word during Q&A panel about his new film and shocked the audience members on Wednesday 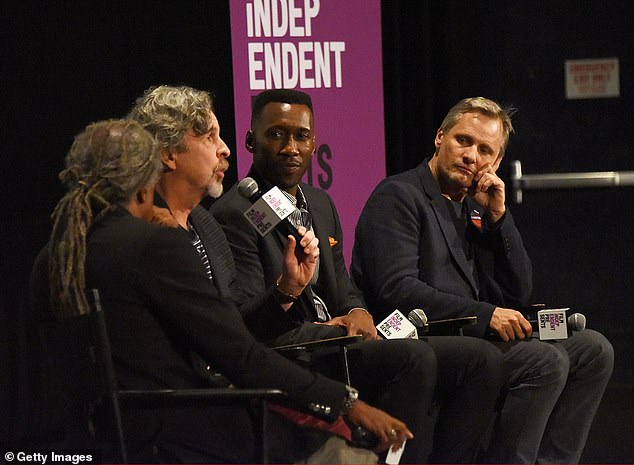 He reportedly said ‘For instance, no one says n****r anymore’ while sitting next to his black co-star Mahershala Ali. The audience and fellow panel members tensed up after he said the slur. Mortensen pictured right next to Ali

Twitter user Dick W. Schulz said ‘the oxygen immediately left the room’ after he dropped the n-word at the Green Book screening panel on Hollywood

After he said the slur guests aid that the panelists on the stage tensed up, including Mortensen’s black co-star Mahershala Ali.

Twitter users were shell-shocked with his choice words and vented about the incident online.

‘Was at a screening for #GreenBook – the movie is amazing, but at the Q&A after Viggo Mortensen just dropped the N Word and the oxygen immediately left the room. #movies,’ Twitter user Dick Schulz wrote.

‘It was all anyone was talking about when we left the theater. I was hearing everybody passing by me going up the stairs going, “That was crazy!”‘ Schulz said toThe Hollywood Reporter.

‘Viggo just started talking, and it got away from him quickly. And that’s when he went, “I’m gonna go off on a tangent here, but it’s important, and I don’t like saying the word,”‘ he added.

On Twitter user added that a woman in the audience said ‘Don’t say that’ when the star dropped the slur.

One Twitter user said the context was discussing the impact of ignoring racism. 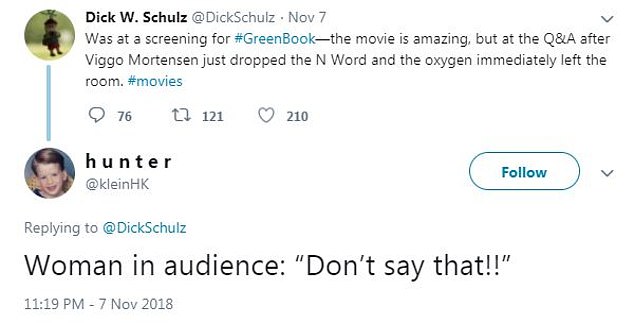 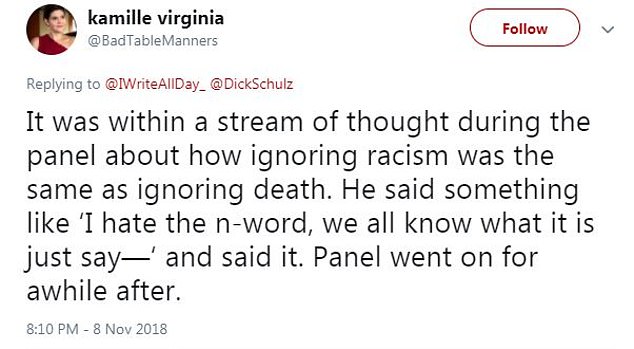 Another Twitter user described that he used the word in the context of hating it, and not in an intentionally derogatory way 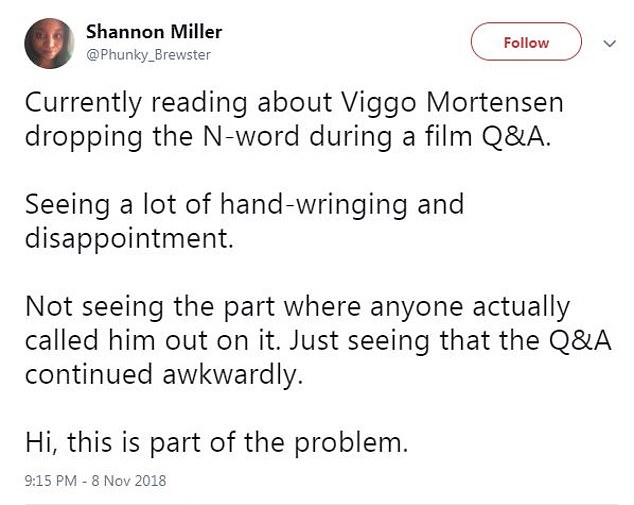 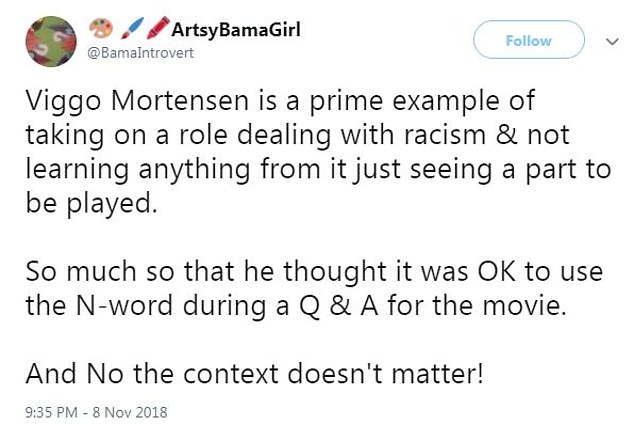 Missed the park: This user criticized the actor for taking on a role about race, but seemingly fail to learn from it

‘He said something like I hate the n-word, we all know what it is just say – and said it’ Twitter user Kamille Virginia wrote.

For many the actor missed the mark.

Race is the central theme of the film in which he plays a white bouncer hired by a famed African-American pianist during his 1960s tour of the South in the Jim Crow era.

Despite working on a film that explores the dynamics of race in the U.S. and learning of connotations of the slur, he still used it, knowing full well its derogatory weight.

He issued an apology saying he ‘will not utter’ the n-word again. 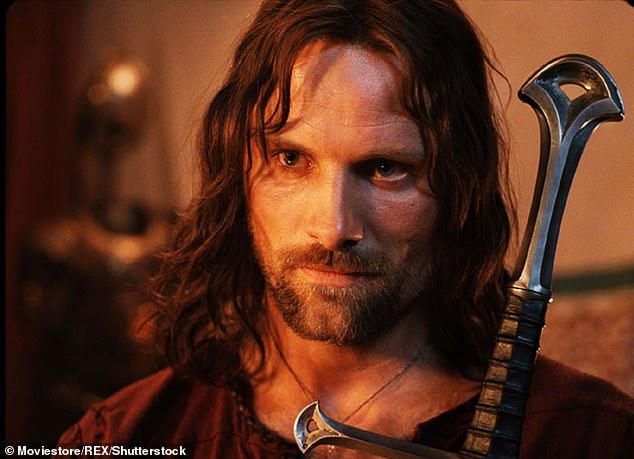 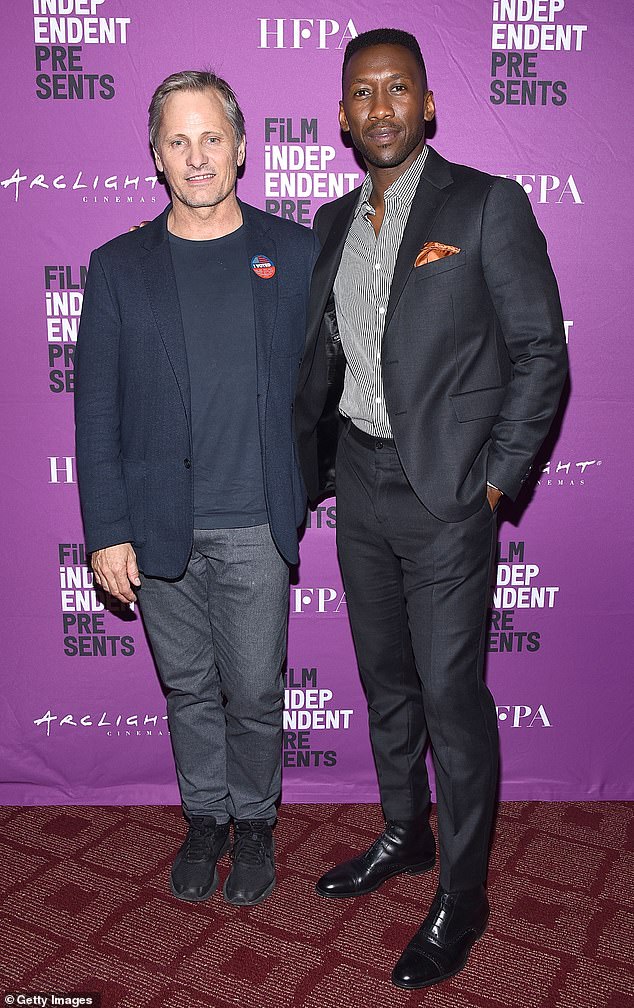 ‘In making the point that many people casually used the “N” word at the time in which the movie’s story takes place, in 1962, I used the full word. Although my intention was to speak strongly against racism, I have no right to even imagine the hurt that is caused by hearing that word in any context, especially from a white man,’ Mortensen said to THR.

‘I do not use the word in private or in public. I am very sorry that I did use the full word last night, and will not utter it again,’ he added.

He added that he took on the role with the purpose of raising racial awareness.

‘One of the reasons I accepted the challenge of working on Peter Farrelly’s movie Green Book was to expose ignorance and prejudice in the hope that our movie’s story might help in some way to change people’s views and feelings regarding racial issues. It is a beautiful, profound movie story that I am very proud to be a part of,’ he said.

His comments follow the firing of a Netflix executive Jonathan Friedland who used the n-word during a company meeting in the context of explaining why it should not be said. He was let go for ‘unacceptably low racial awareness and sensitivity’.