Lord Sugar is accused of homophobia after tweeting: ‘I have enough puffs’

Alan Sugar has been slammed on social media after users accused him of tweeting a homophobic slur.

The business tycoon replied on Twitter to a photo of his face on a Sugar Puffs cereal box with: ‘hah…… I have enough puffs who come through my boardroom’.

But some online users slammed The Apprentice host’s tweet branding it ‘homophobic’ and ‘below the belt’.

Twitter users asked Lord Sugar to delete the tweet, with others questioning the BBC over the use of the word.

But Lord Sugar later claimed his reference to ‘puffs’ was referring to ‘PEOPLE FULL OF HOT AIR’.

The business tycoon replied to a photo of his face on a Sugar Puffs cereal box with: ‘hah…… I have enough puffs who come through my boardroom’

One Twitter user said: ‘Slightly below the belt for someone of your stature, disappointing’.

Another user wrote: ‘You may wanna rethink this tweet.’

Another user said: ‘That ones going to come back S Lord’.

Others backed him, saying he was only tweeting in jest. 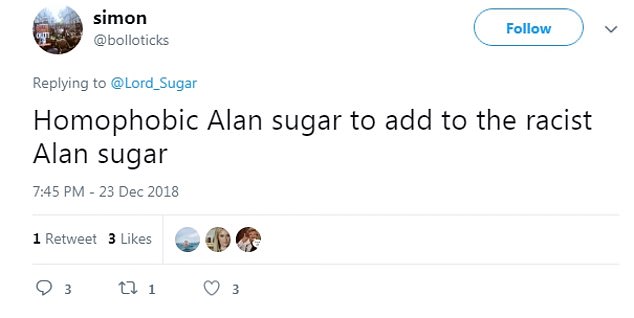 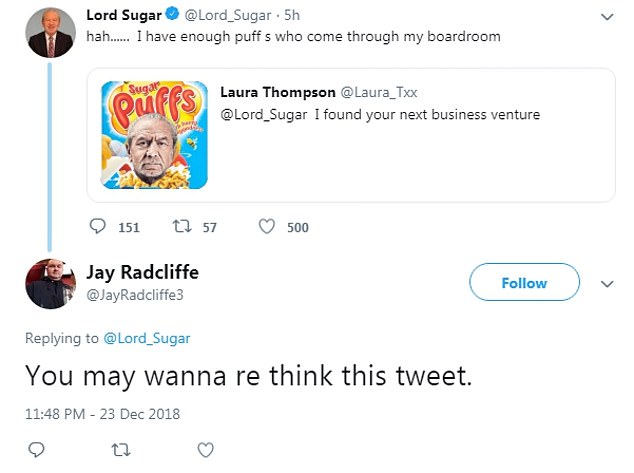 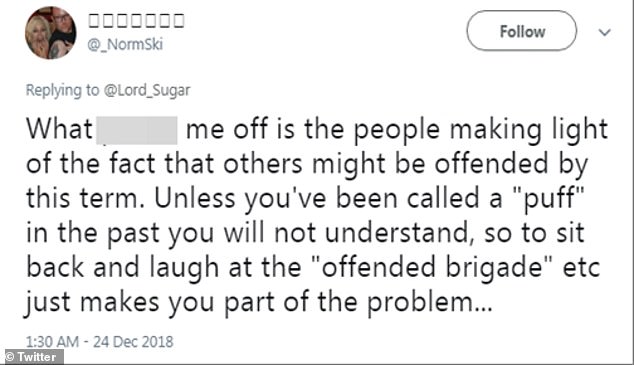 Many took issue with Lord Sugar’s tweet. But David Fanthom said it would mean banning both cheesy and sugar puffs

The latest twitter spat comes after the tycoon was caught up in a storm after posting a controversial tweet in which he compared Senegal footballers to Marbella beach sellers.

Users on Twitter slammed Lord Sugar’s tweet and others called for his sacking – but he initially failed to back down, criticising the ‘OTT’ reaction to a ‘bloody joke’.

The tweet was eventually removed 23 minutes later – but Lord Sugar, 71, insisted this was only because it was ‘interpreted in the wrong way as offensive by a few people’.

However, 82 minutes after posting the initial message, he admitted the tweet was ‘misjudged’ and his ‘attempt at humour has backfired’, saying he was ‘very sorry’. 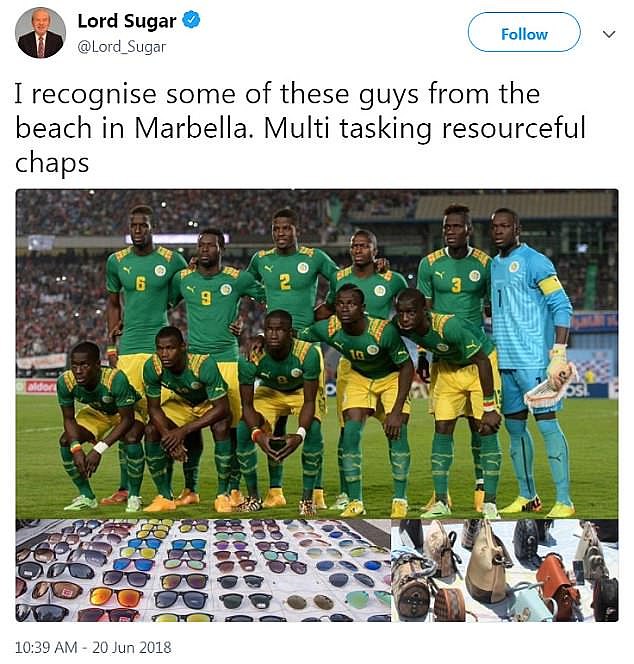 The corporation’s press office said earlier: ‘Lord Sugar has acknowledged this was a seriously misjudged tweet, and he’s in no doubt about our view on this. It’s right he’s apologised unreservedly.’

But Lord Herman Ouseley, chair of Kick It Out, football’s equality and inclusion organisation said Lord Sugar ought to have known better.

He told Metro.co.uk: ‘This coming from one of Britain’s most respected business leaders, a man who was born in to an East End Jewish family and is proud of his roots, and a former Tottenham Hotspur chairman.

Lord Sugar also tweeted, to a follower who asked when he would apologise: ‘I can’t see what I have to apologise for… you are OTT… it’s a bloody joke’

Some 82 minutes after posting the initial message, he admitted the tweet was ‘misjudged’ and his ‘attempt at humour has backfired’, saying he was ‘very sorry’

‘Someone, in other words, who ought to know about racist stereotypes. It shows we have a long way to go.

‘Any assumption made about somebody based purely on their race is racism. There’s no getting away from that.

‘Even when the perpetrators think they’re being funny – or with the misguided aim of being supportive even – it’s unacceptable. ‘

Labour MP Dawn Butler has called for the BBC to cut ties with Lord Sugar. She tweeted a grab of a section titled ‘Treating everyone equally’ from the BBC’s Code of Conduct, which states they do not ‘tolerate discrimination of any kind’.

She wrote, referring to his catchphrase: ‘Take a look at the BBC’s Code of Conduct. It’s time the BBC pulled Lord Sugar into the boardroom and told him ‘You’re Fired’.’

Ms Butler had earlier said that she was going to write to the House of Lords Commissioner for Standards and the BBC to call for an ‘immediate investigation’. 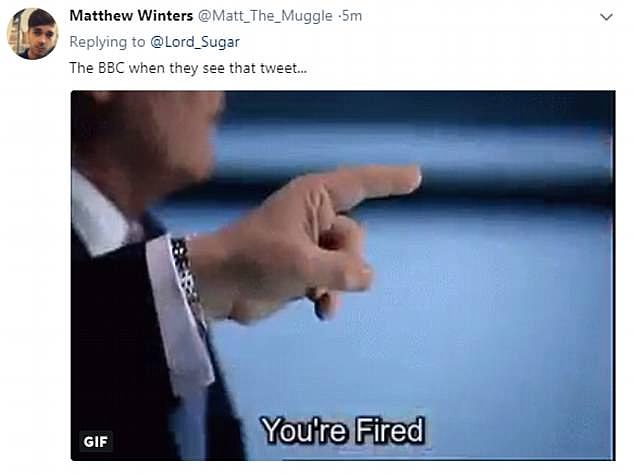