The first parents to try and fight federal charges in the Operation Varsity Blues scandal appeared in a federal court on Friday.

Dr Gregory Colburn and his wife Amy of Palo Alto, California are two of the very few parents who have elected to fight the charges filed against them by prosecutors, even after being hit with a superseding indictment  in the case.

The couple have been charged with both conspiracy to commit mail fraud and money laundering conspiracy for offenses they allegedly committed in hopes if boosting their son’s chances at gaining admission to colleges including: Indiana University; Texas Christian University; University of Oregon, Eugene; and University of Arizona, Tempe.

On Friday, they were called in for a Rule 44 hearing, the same appearance that actress Lori Loughlin and her husband will be making in one month’s time.

Both couple’s have been  urged to cut all legal ties with their spouses and seek individual representation before their criminal trials.

That is because federal prosecutors will be trying the defendants individually, and having the same lawyer as another defendant in a criminal case presents a clear conflict of interest.

Fighting the feds: On Friday, Dr Gregory Colburn and his wife Amy appeared in Massachusetts federal court for a Rule 44 hearing (the Colburns above after a April hearing in Boston) 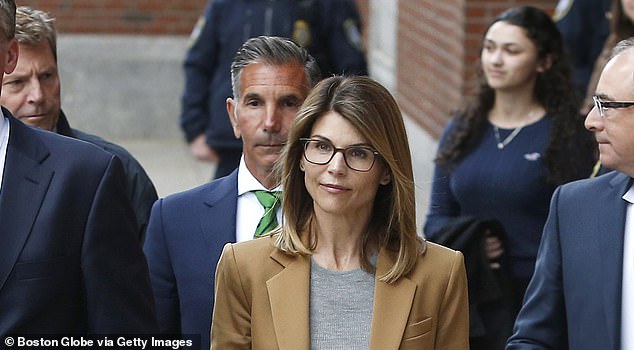 Legalese: The couples who have entered not guilty pleas, including Lori Loughlin and Mossimo Giannulli (above in April), are being urged to hire different lawyers than their spouses

The recommendations of the court and prosecutors could not sway the Colburns however, who on Friday told Judge M. Page Kelley they planned to proceed with their attorney from the offices of Hooper Lundy & Bookman.

‘In your specific case, even if that motion is successful, you will almost certainly be tried together as being in the same conspiracy,’ explained Judge Kelley at one point.

‘No matter what happens with that motion, you’re still in the same boat you are today.’

The US Attorney for the District of Massachusetts,  Eric Rosen, also explained to the couple that they could not wield a change of attorneys down the line as a delay tactic in the case.

Judge Kelly then gave an example of how this could backfire for the couple, saying if it came up at trial that one party had committed some offense to which the other party was not privy or aware of at the time, their lawyer’s hands would be tied with no real remedy for the innocent party.

These proceedings will be further complicated when Loughlin and her husband Mossimo Giannulli appear for their Rule 44 hearing next month.

The couple are both being represented by lawyers from the form of Latham & Watkins in their criminal case.

There is also a potential conflict because that same firm is representing the University of Southern California.

Loughlin and her husband allegedly paid bribes and concocted bogus rowing profiles for their daughters to secure their admission to USC, which could potentially lead to legal filings from the school, the couple or their daughters.

Their two girls, Olivia Jade and Bella Rose, do have separate legal representation than their parents as DailyMail.com reported earlier this year.

The Colburns are the only two defendants who have laid out how they [plan to fight the charges at trial, doing sop when they asked back in April that the superseding indictment in the case be dismissed.

It’s  date: Loughlin (above) and Giannulli will appear for a Rule 44 hearing next month in Boston

‘The court should dismiss the indictment against the Colburns because it … does not allege sufficient facts or legal grounds to treat the Colburns as members of a single conspiracy that includes all of the other alleged co-conspirators,’ the couple said.

‘The United States does not allege that the parents knew of each other or had any interest in each other’s children.’

The two are accused of paying $25,000 to have a proctor edit their son’s SAT following a private exam session in 2017, and then submitting the falsified document to boost the boy’s score.

The laundering charges is tied to a check Dr Colburn wrote for a little over $500 to college mastermind William Rick Singer’s Key Worldwide Foundation.

Dr Colburn, a radiation oncologist at O’Connor Hospital in San Jose, wrote in  the subject line of that check ‘charitable donation.’

He was one of the few parents who was alerted to the fact that there was an investigation into Singer’s finances, having been told about an IRS audit back in October.

‘What I am telling them is that your payment essentially went to our foundation to help undeserved kids’ said Singer, according to court documents.

Singer failed to mention however that he was a cooperating witness and working with federal prosecutors at that time.

These early conversations made the Colburns the second and third people indicted by the grand jury in the initial group of 50 defendants.

‘The Colburns are innocent of the charges brought by the U.S. Attorney’s Office,’ said a representative from Hooper Lundy & Bookman back in April.

‘The motion to dismiss highlights the legal flaws in the government’s indictment, which it has now superseded twice. The Colburns did not participate in the sprawling conspiracy alleged by the government, or any other conspiracy. They are putting their trust in the judicial system to clear their names.’