A Los Angeles firefighter secured $300,000 in overtime pay for just one year, putting in more hours than that actually exist in a 365 days.

Donn Thompson was found to have raked in the extra money on top of his $92,000 salary for 2017, according to Transparent California – a project of the Nevada Policy Research Institute.

The database also found that over the last four years, Thompson has finessed more than $1million in overtime, Reason.com reported.

His ability to get such an amount ‘boggles the mind,’ claimed Robert Fellner, who is the director of research at the institute.

His overtime pay comes out to $47.40 per hour, which is approximately one and a half times the base rate.

According to Fellner, Thompson could be using the contracts provisions to boost his overtime.

This isn’t Thompson’s first run of the mill when it comes to securing the big bucks.

The fire department was spending $598million on overtime, considered ‘budget-wrenching’ by the paper which said that other cities were using a third of that amount.

The Los Angeles Daily News reported in 2009 that the overtime budget grew more than 60 percent over a decade.

Thompson, himself made ‘$173,335 in overtime in addition to his nearly $100,000 base salary while working at Fire Station 19 on Sunset Boulevard in Brentwood.’ 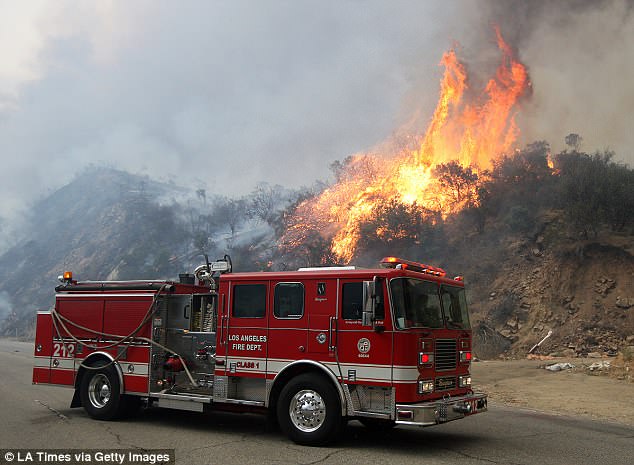 During 2017, the Los Angeles Fire Department had 512 employees who cashed in with at least $100,000 in overtime pay, according to Transparent California

He was featured again in the San Diego Union-Tribune in 2014 where he claimed to have ‘basically lived at the station’ adding that he hardly went home.

‘The first thing [people] think of is firefighters sitting around at the station, but they’re not just handing out free money over here,’ Thompson said. ‘I’m working hard.’

But in the 1996 article, the LA Times found that most of the hours weren’t actually going toward ‘fires or other emergencies. Instead, most of it goes for replacing those who are out because of vacations, holidays, injuries, training, illnesses or personal leaves.’

Thompson isn’t the only member of the department bringing in the big bucks.

During 2017, the Los Angeles Fire Department had 512 employees who cashed in with at least $100,000 in overtime pay, according to Transparent California.

That’s almost ten times the number of the 51 employees who reached the mark in 2012.

The department spent $198million on overtime pay, which was a 74percent increase since 2012.

But for those taxpayers concerned by the large sums of cash, overtime pay can no longer be factored into pension benefits.

The move is one of the fallouts of the 2012 pension reform bill that was signed by Gov. Jerry Brown.