There is growing confusion and outrage over the lockdown in Los Angeles where beaches have reopened and curbside retail has begun, despite the mayor giving mixed messages about the city never fully opening until there is a coronavirus cure and health officials claiming it would stay closed for another three months.

There have been 1,613 deaths and 33,180 cases of the virus in L.A. since mid March. It was one of the first cities to go into lockdown and California Gov. Gavin Newsom is among the most cautious state leaders when it comes to reopening.

But over the last week, as more states start loosening their restrictions, Newsom announced that California would start softening its lockdown to allow some businesses – including dine-in restaurants where he had specifically approved it – to reopen.

Curbside retail can now resume and beaches are open but in L.A. County, the stay-at-home order has been extended indefinitely.

Another indicator of progress is that the USNS Mercy, which was drafted to L.A. to take in patients if the hospital systems became overwhelmed, is leaving the city on Friday.

Mask are now mandatory in public in Los Angeles.

At a press conference on Thursday, LA County Public Health Director Barbara Ferrer – who sparked mass panic and hysteria earlier this week by saying the city would be in lockdown for three more months – said: ‘Masks are, in fact, mandatory across the entire county when you’re outside of your home, not with members of your household and in any kind of contact with other people.

People wait for coffee at a take-out shop in L.A. on Friday, May 15, after all retailers were allowed to reopen on a curbside basis only 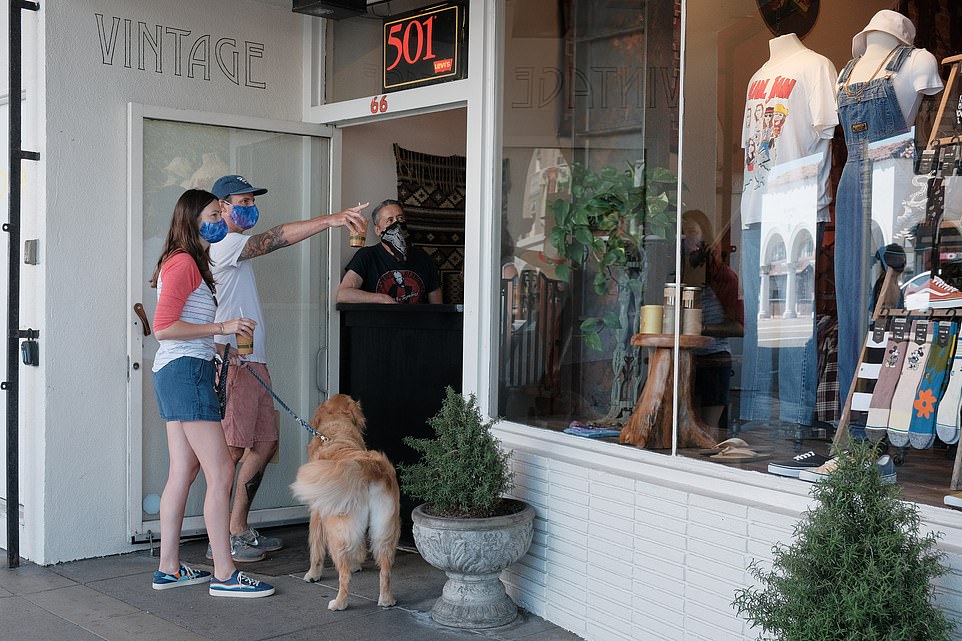 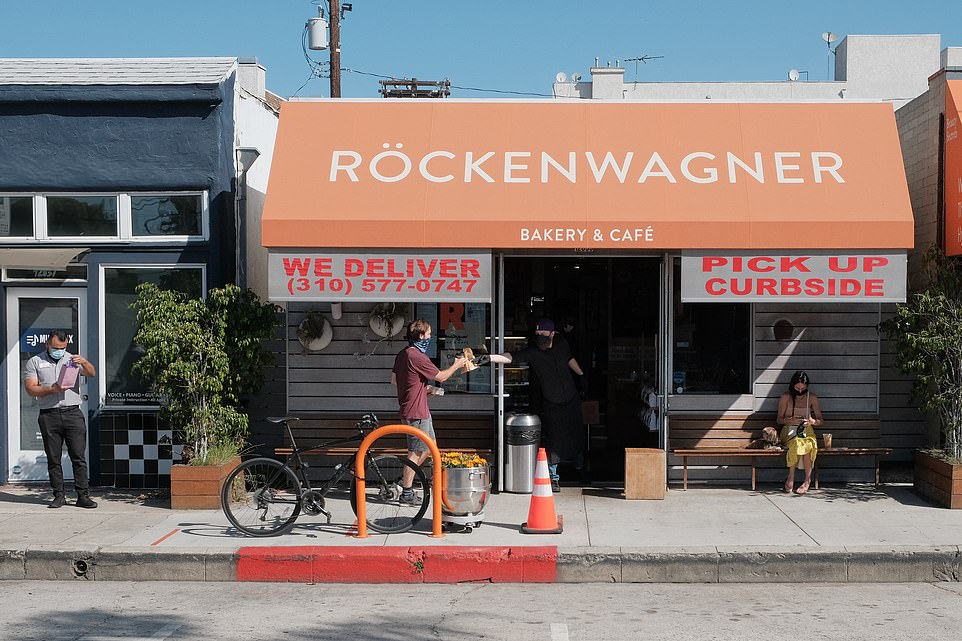 People shop in L.A. on Friday after curbside retail was allowed to reopen 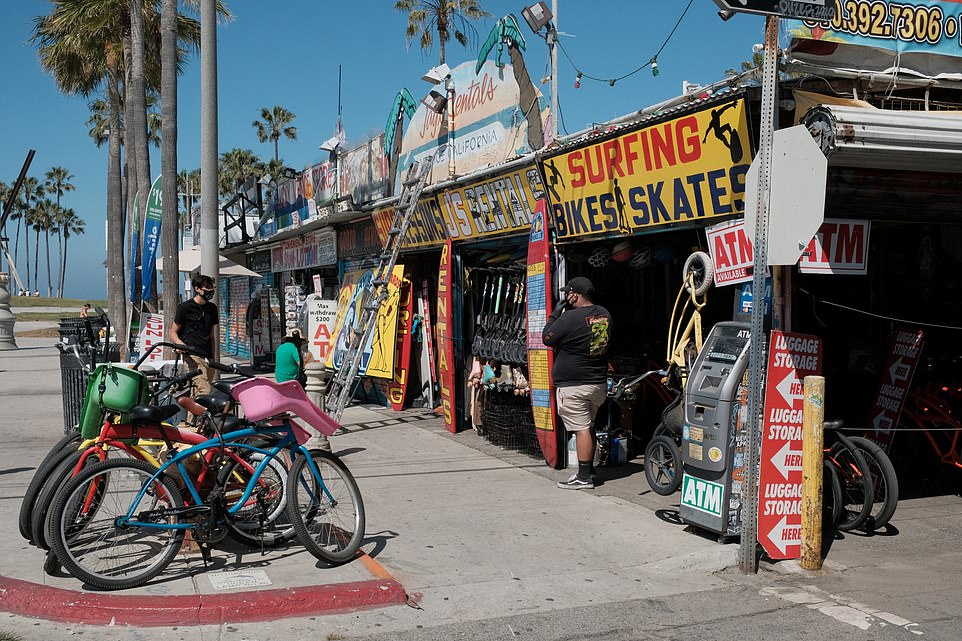 Curbside retail is now allowed again in California. On Friday morning, there were few people patronizing equipment rental stores though

‘We are all required to use those cloth face coverings.’

It has sparked confusion among residents who are being told to stay at home as much as possible while also seeing restrictions being lifted.

To complicate things, earlier this week the L.A. County Health Director sparked mass hysteria by saying the county would ‘almost certainly’ remain closed for the next three months.

L.A. Mayor Eric Garcetti sought to reduce the panic by clarifying that she meant only social distancing and mask wearing would apply. He then confused matters by suggesting the city would remain at least partially closed until there is a ‘cure’.

Now, face coverings have been made mandatory in across L.A. County.

Curbside retail has begun but malls remain closed and restaurants are take-out only. Only some Californian counties have received approval to relaunch dine-in services and it’s unclear what those are.

Beaches are open but only for activity. 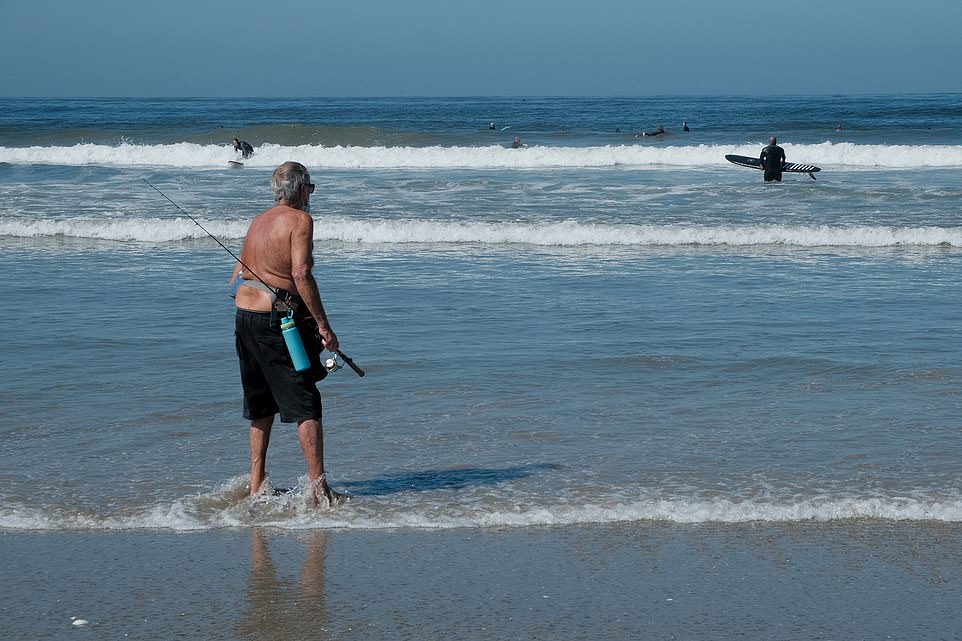 People at Venice Beach on Friday after it was reopened, along with LA County’s other beaches, for activity 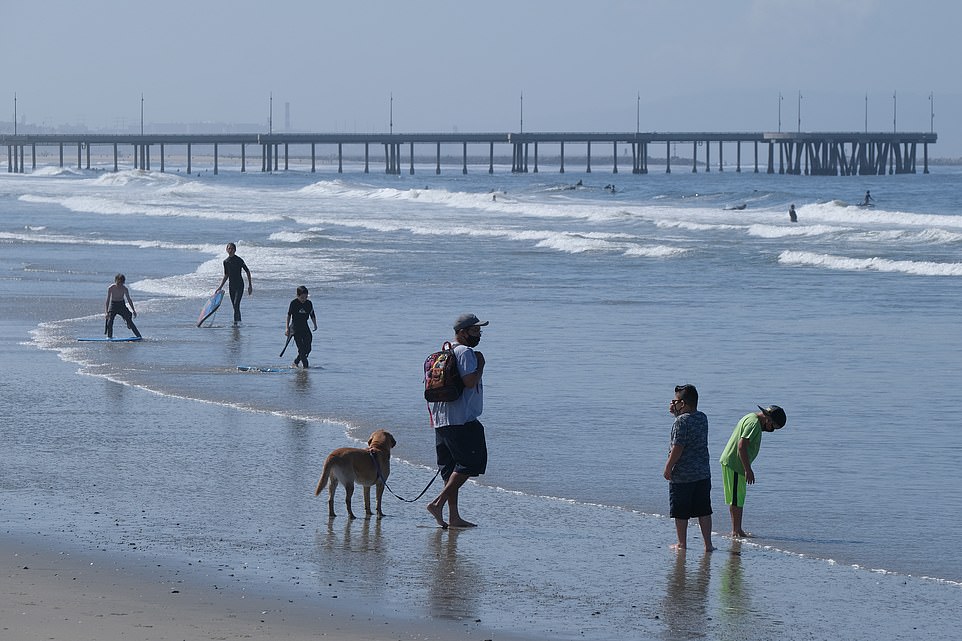 People are allowed to walk, jog, swim and surf at the beach but gatherings are not allowed nor is laying out 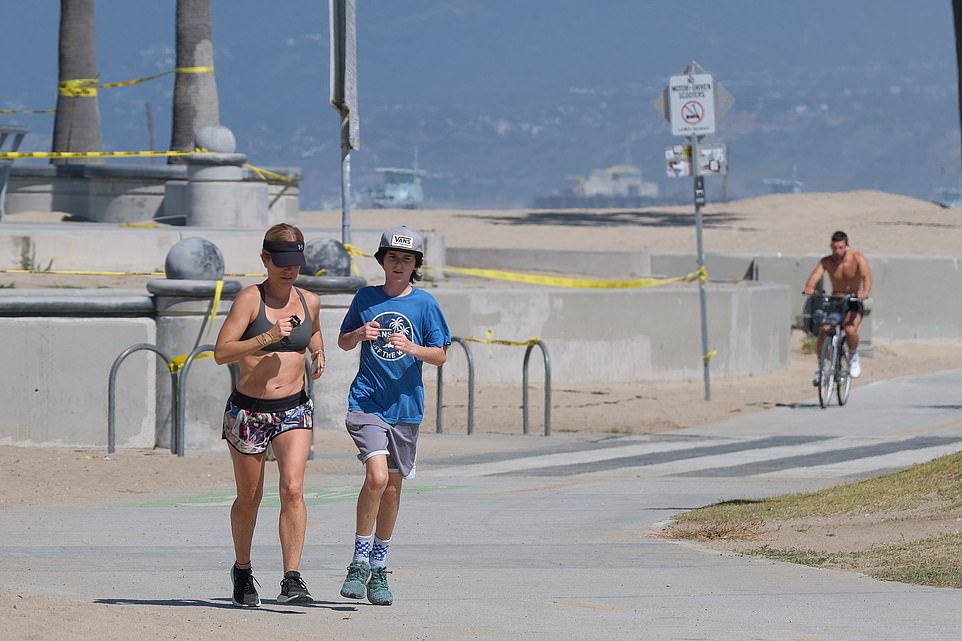 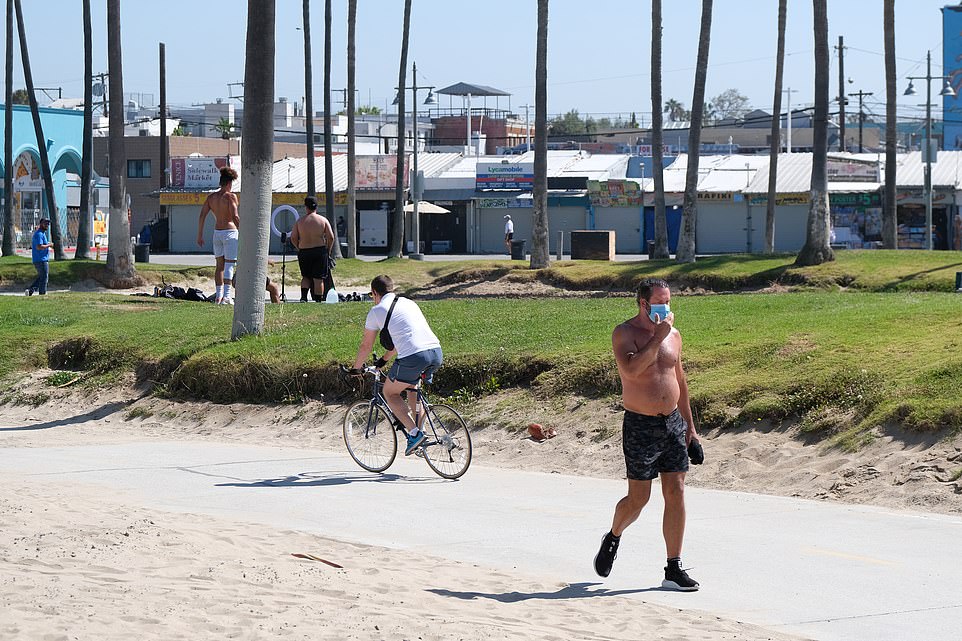 People at Venice Beach on Friday. Masks and face coverings are now mandatory across LA County 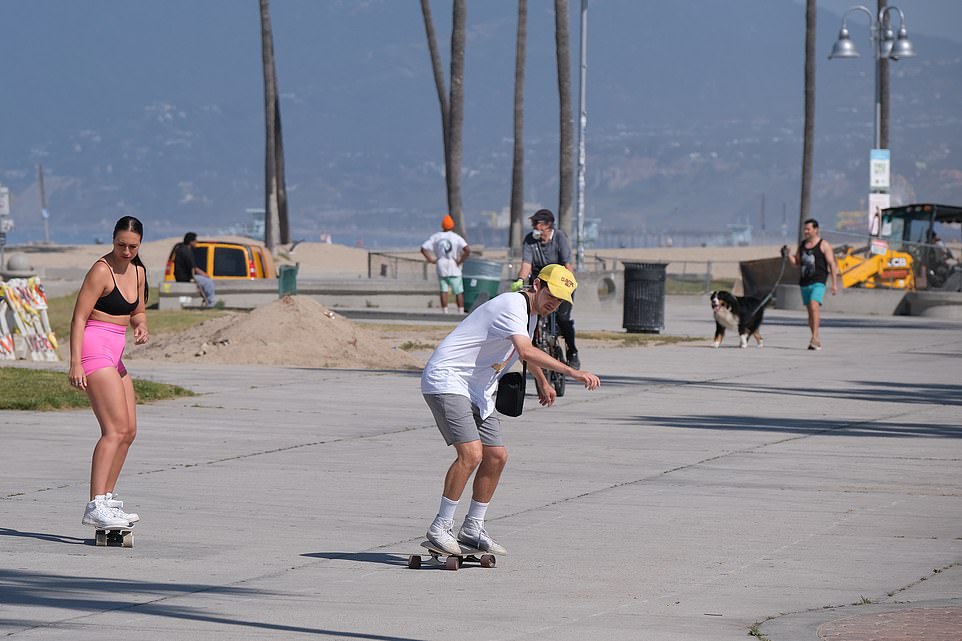 Skateboarders at Venice Beach on Friday. Despite face masks now being mandatory, few were wearing them 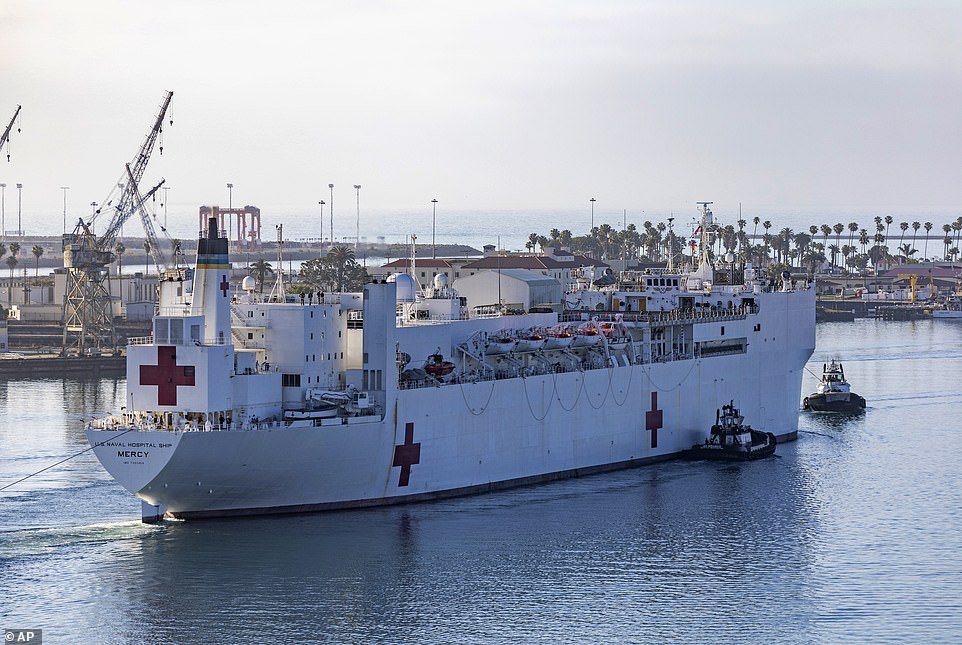 The USNS Mercy leaving L.A. today. The Navy ship cared for just 77 patients but was drafted into the city to serve as an overflow hospital in case hospitals became overwhelmed

Sitting on the sand, gathering in groups and group sports are not permitted, but walking, running, swimming and surfing are all allowed. 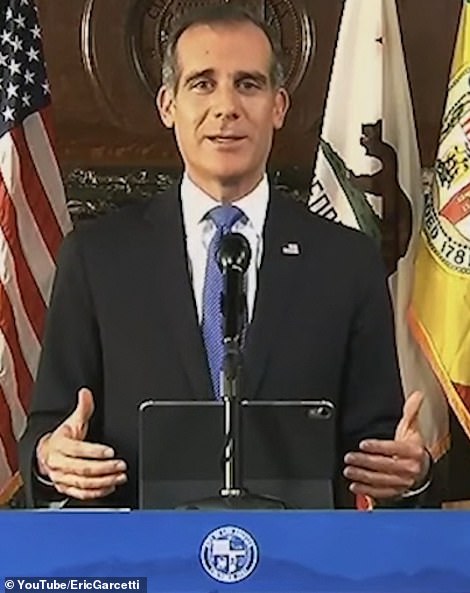 The slow reopening, particularly in Los Angeles, has outraged many.

Among critics is Fox’s Sean Hannity.

On his show on Thursday, he fumed at Garcetti: ‘If you want to wait till there is a cure, that’s fine. But don’t expect the rest of America to fund your show.

‘You want to make that decision? You think it’s in your best interests? That’s on you.

‘And you will have to pay for all of that,’ he fumed at Garcetti.

There is a growing divide between Republican states that have lower coronavirus cases and are reopening and worse-hit Democrat states and cities.

Conservatives have accused Democrats of trying to squeeze money out of the federal government under the guise of the pandemic, whereas Democrats say that to politicize the issue is inhumane.

Hannity hinted at the difference in his back-and-forth with Garcetti on Thursday, saying: ‘We can learn from Florida.

‘And that means that places like New York, L.A., if you want to stay locked down for months or even years … your cities will turn into ghost towns and America’s economy, your economies will face permanent damage.

‘Now, states that elect smarter governors that don’t tax their citizens to death and actually pay off their pensions and don’t take on big debts and deficits, don’t expect them to bail you out, because they won’t be doing it.’

He and others say leaders are changing the rules by now saying they won’t reopen fully without a cure.

‘Remember, this is the land of the free, the home of the brave. Most Americans are not going to cower in fear, but we will learn the lessons that we have learned the last few months. We did the lockdown.

‘We listened to the experts, even those that were dead wrong … We did, thankfully, flatten the curve. We learned some lessons, some from success and some from failure.’

On Wednesday, Garcetti told Good Morning America: ‘I think we have to all recognize that we’re not moving beyond COVID-19. We’re learning to live with it.

‘We’ve never been fully closed, we’ll never be completely open until we have cure.’