A big comeback. A blown call. Finally, a booming kick that sent the Los Angeles Rams to the Super Bowl after rallying from an early 13-0 deficit.

The Rams stunned the New Orleans Saints with Greg Zuerlein’s 57-yard field goal in overtime for a 26-23 victory in the NFC championship game – an outcome that might not have been possible without an egregious mistake by the officials in the closing minutes of regulation time.

Rams cornerback Nickell Robey-Coleman committed a blatant interference penalty with a helmet-to-helmet hit inside the five, forcing the Saints to settle for Wil Lutz’s 31-yard field goal that made it 23-20 with 1:45 left. 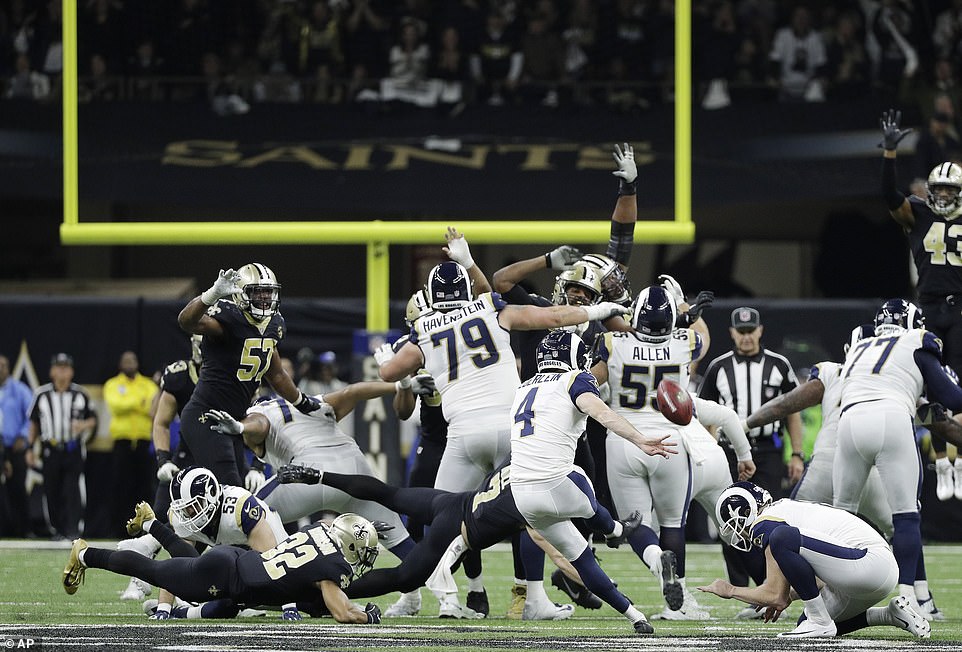 Rams kicker Greg Zuerlein (No 4) was the hero, kicking a 57-yard field goal to send his side to their third ever Super Bowl 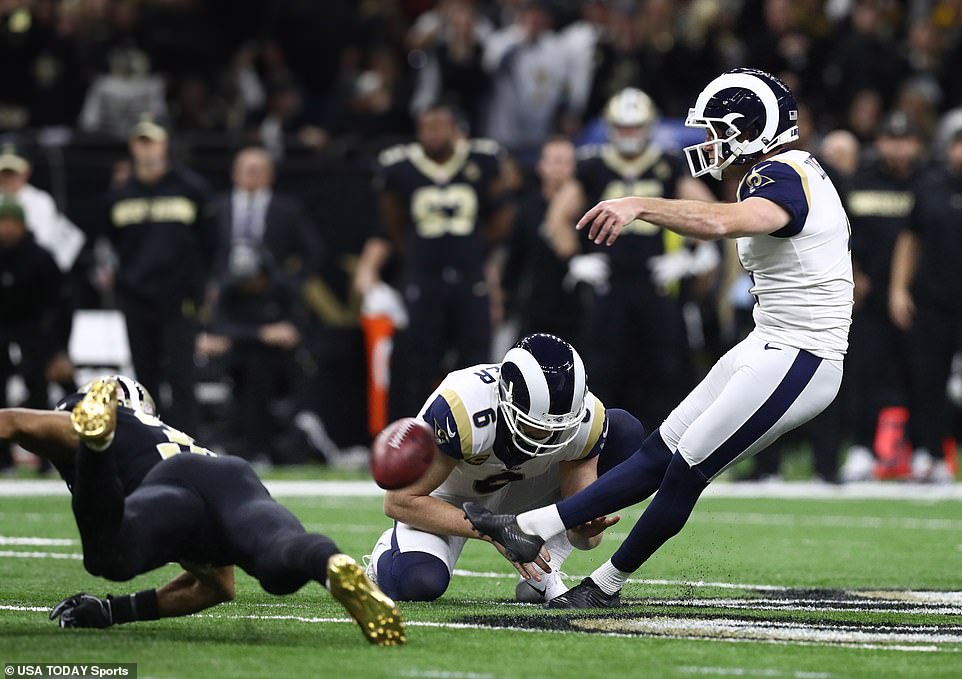 Zuerlein, who also kicked the three points which forced overtime with seconds remaining, kept a cool head as he struck 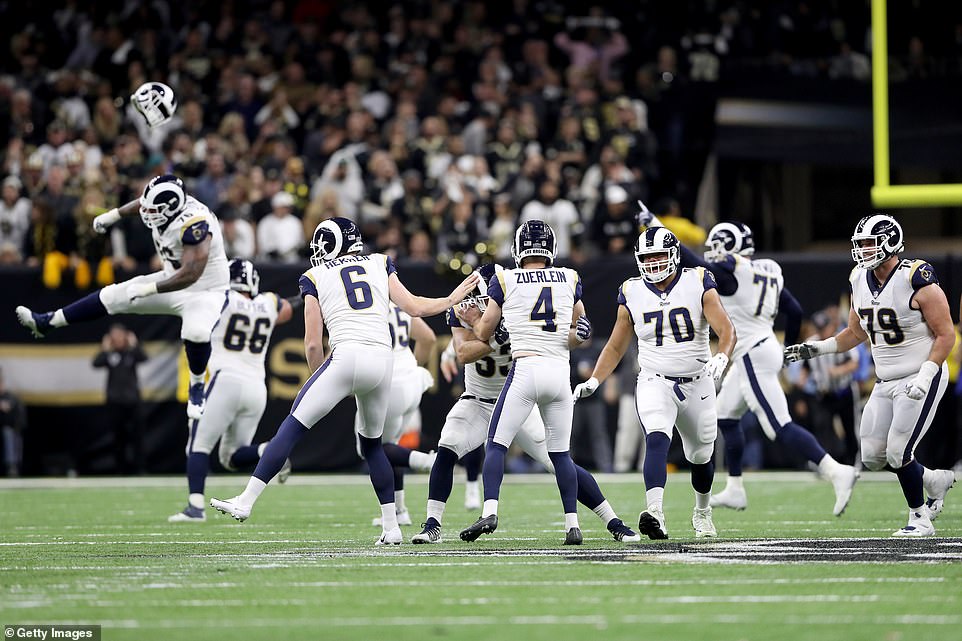 That was enough time for Jared Goff to lead the Rams down the field for Zuerlein’s tying field goal, a 48-yarder with 15 seconds remaining.

New Orleans won the coin toss and got the ball first in the extra period, but, with a Rams defender in his face, Drew Brees fluttered up a pass that was picked off by John Johnson III, who was able to hang on to the interception while stumbling backward.

Johnson hopped up and celebrated by doing with the ‘Choppa Style’ dance popularised by New Orleans rapper Choppa, whose namesake song had become a Saints’ rallying cry and was even performed during the halftime show.

The Rams weren’t able to do much offensively, but it didn’t matter. Zuerlein booted through the winning field goal from just inside midfield with plenty of room to spare.

‘It’s unbelievable, man. I can’t put it into words,’ Goff said. ‘The defense played the way they did to force it to overtime. The defense gets a pick and Greg makes a 57-yarder to win it. That was good from about 70. Unbelievable.’ 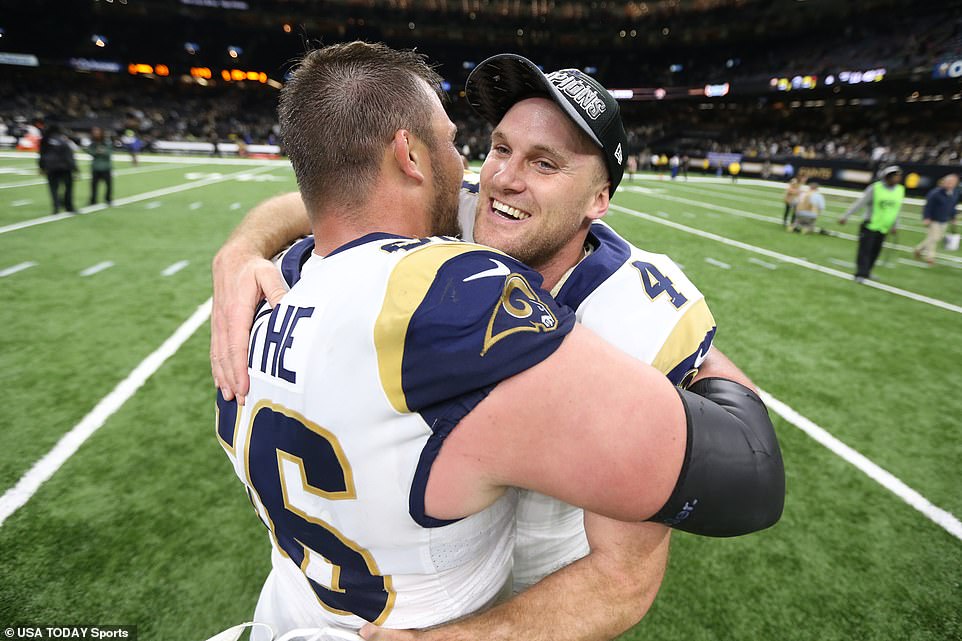 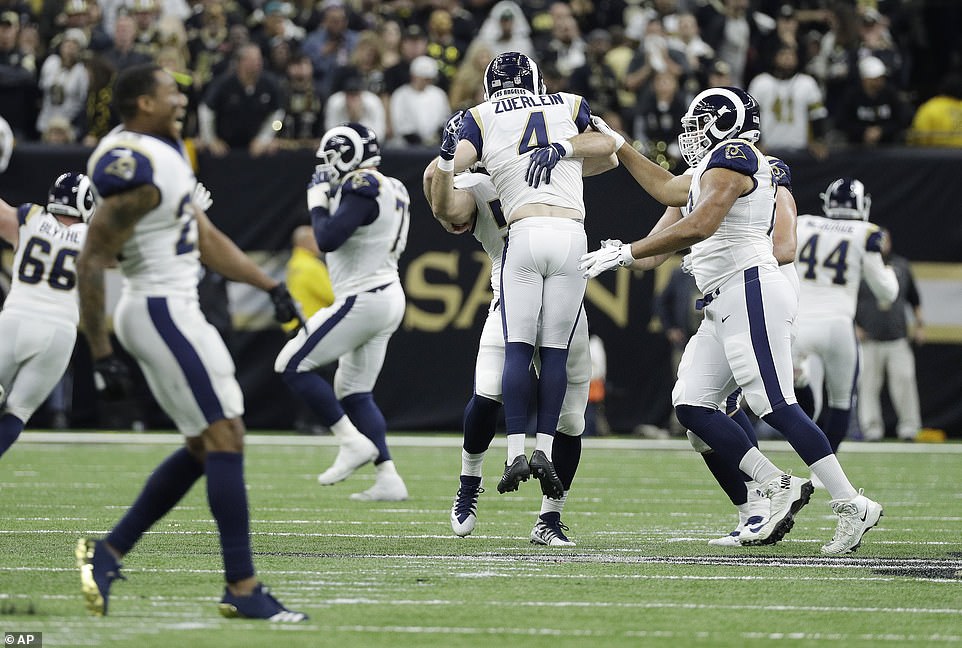 Zuerlein wrote himself into NFL folklore with his two crucial kicks, which turned a 20-23 deficit into a 26-23 victory 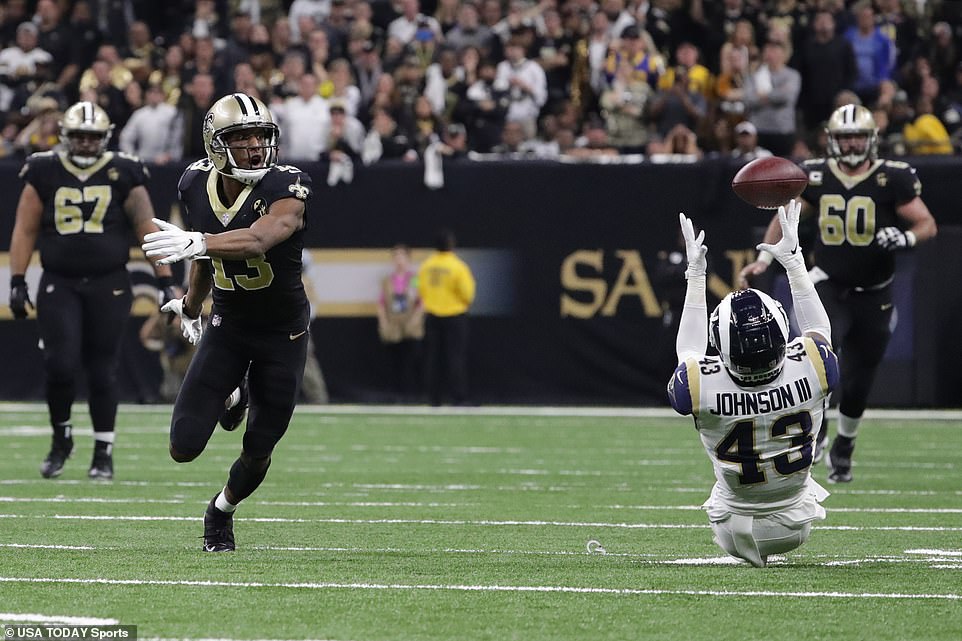 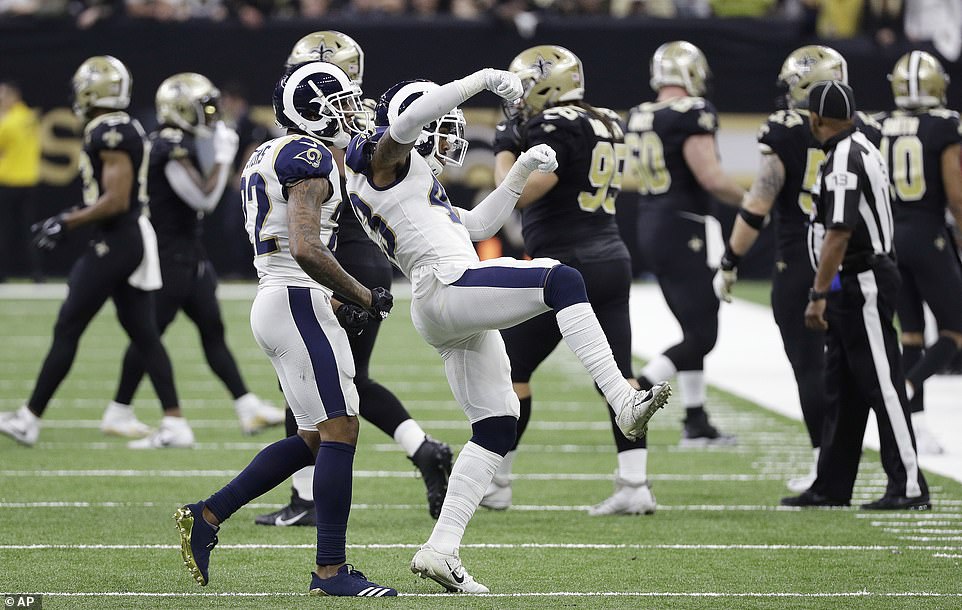 Johnson celebrates his interception, which turned the ball over to the Rams and allowed Zuerlein to kick the field goal 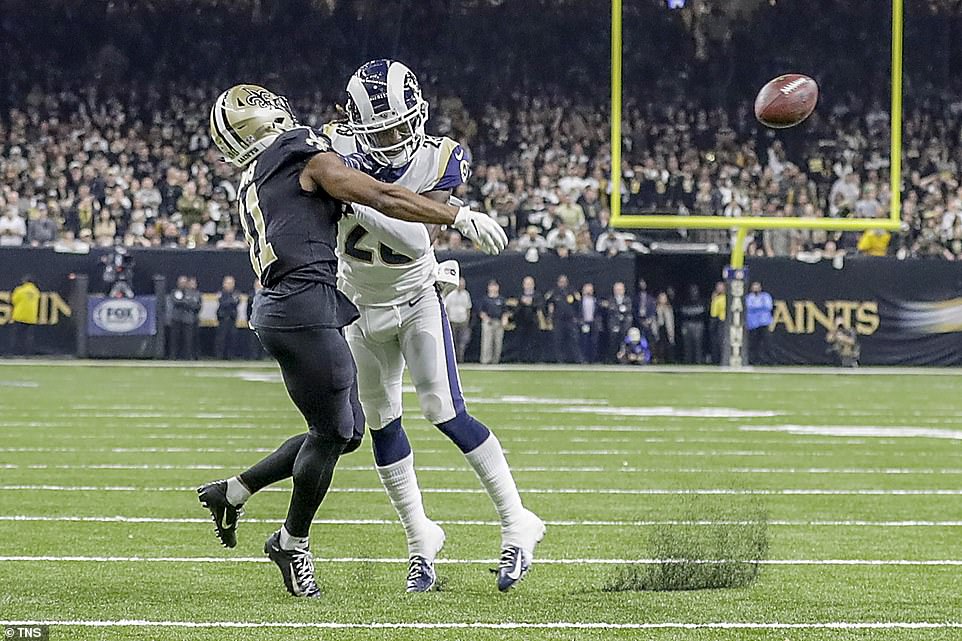 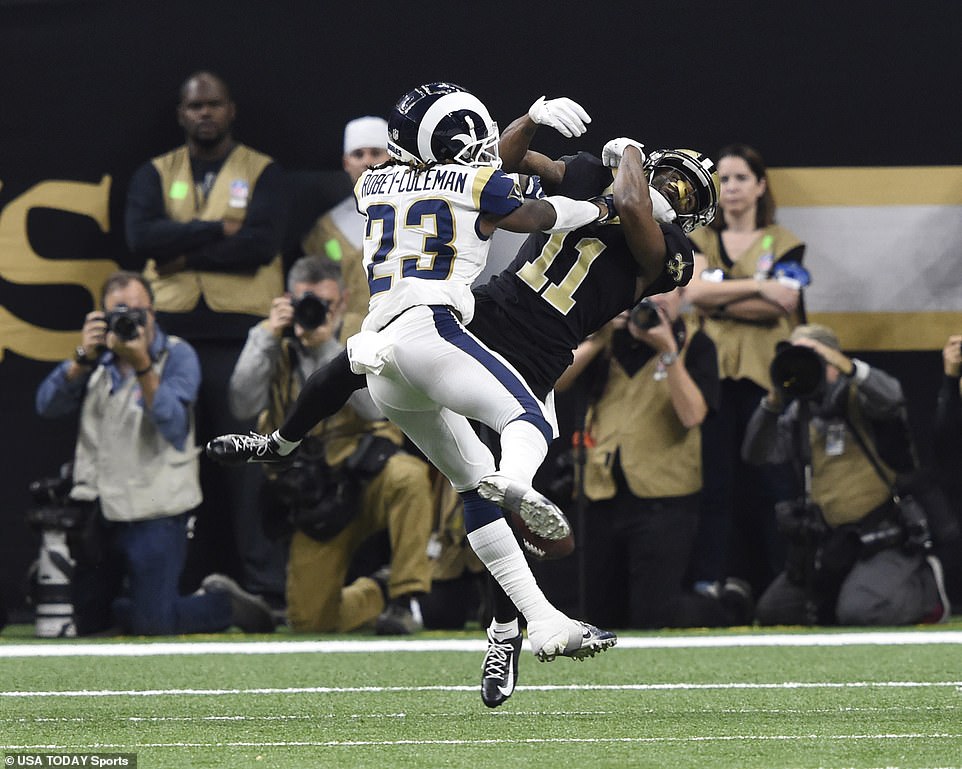 Robey-Coleman broke up a pass intended for Saints wide receiver Tommylee Lewis, forcing the hosts to take a field goal

The Superdome, which had been in uproar all afternoon, suddenly turned eerily silent. It was the first home playoff loss for the Saints with Brees and coach Sean Payton, who and been 6-0 in those games since their pairing began in 2006.

The Rams (15-3) and their 32-year-old coach, Sean McVay, capped a remarkable rise since moving back to Los Angeles three years ago. The team will be appearing in its first Super Bowl since the 2001 season, when the ‘Greatest Show on Turf’ was still in St. Louis. ‘Shoot, I don’t even know what day it is,’ McVay said. ‘All I know is we’re NFC champs, baby!’

It was another bitter end to the season for the Saints, who lost the previous season in the divisional round on the ‘Minnesota Miracle’ – the Vikings’ long touchdown pass on the final play of the game.

‘It’s a tough pill to swallow,’ said Brees, who was denied a shot at adding to the Super Bowl title he won during the 2009 season. This time, New Orleans (14-4) couldn’t hang on to the lead or overcome a mistake by the officials.

The Saints were on the verge of blowing out the Rams, scoring on their first three possessions and taking advantage of an interception off a dropped pass by Todd Gurley.

Then a fake punt early in the second quarter gave Los Angeles its initial first down of the game. Sparked by that play, the Rams finally came to life offensively and drove into position for the first of four field goals by Zuerlein. Gurley made it 13-10 at halftime on a 6-yard touchdown run just before the intermission. 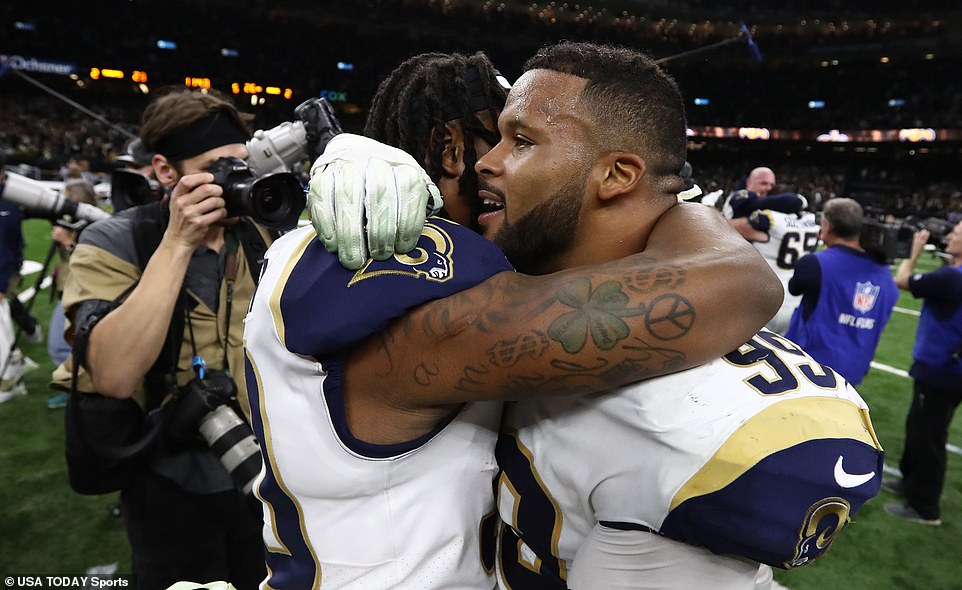 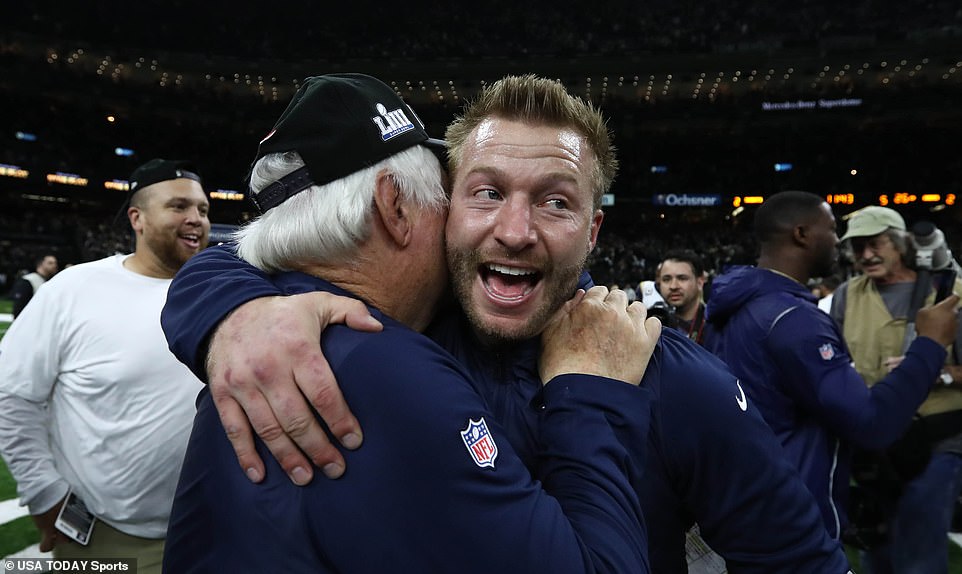 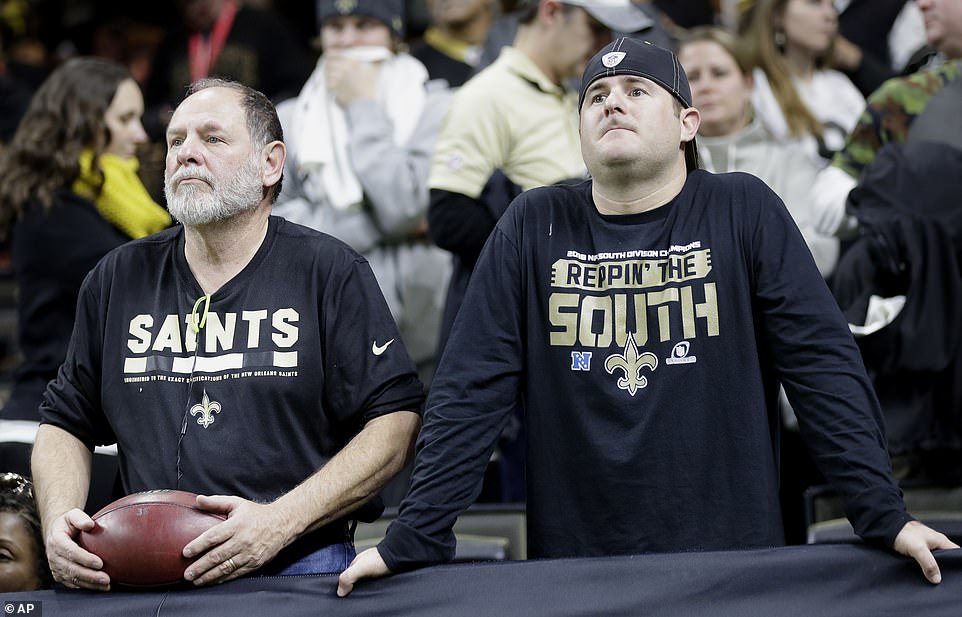 The game was played in New Orleans, and the home fans were left devastated as their side missed out on the Superbowl