Los Angeles has suffered its worst smog in 26 years as wild fires continue to rip across the West Coast which have left at least 23 dead.

Unlike earlier in the week when high winds swept a lot of the smoke out to sea, the air quality deteriorated considerably on Thursday morning.

The worst of the lung-damaging ozone pollution was in San Francisco and Oakland – the Golden Gate bridge was almost camouflaged against the orange hew – and also in Sonoma County, particularly the town of Sebastopol.

IQAir, which measures air quality throughout the world, found that San Francisco was tied with Dubai in the UAE with having the world’s worst air quality with an index of 167 parts per billion at 10am, considered ‘very unhealthy’ and way above the federal standard of 70ppb.

In rural areas such as Yosemite National Park that AQI level soared to 400ppb, the LA Times reported.

Lung-damaging ozone pollution spiked to 185ppb in downtown LA at midday on Sunday, the highest reading in Southern California since 2003 and highest in the city for 26 years.

The fires raging in California, Oregon and Washington state have forced more than 500,000 Oregonians are forced to evacuate due to 100 major fires that have devastated nearly 4.4 million acres across 12 states.

A Northern California wildfire became the state’s deadliest of the year Thursday when authorities announced seven more deaths. Officials said the number may rise as searchers looked for 16 missing people.

Three other deaths have been confirmed in Oregon and one in Washington state, authorities said. 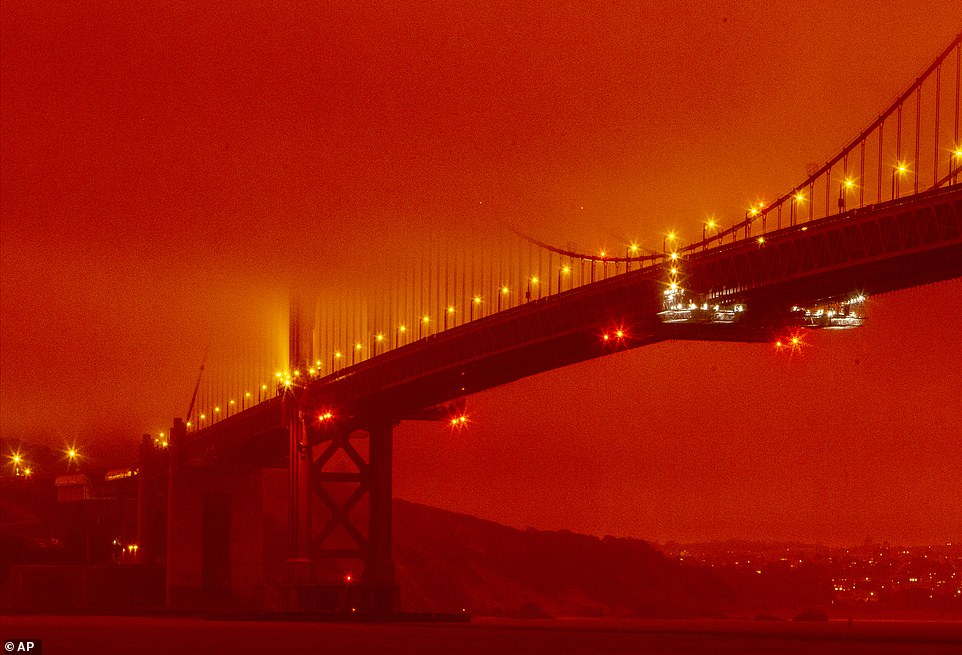 The Golden Gate Bridge is seen at 11am on Wednesday in San Francisco, amid a smoky, orange hue caused by the ongoing wildfires 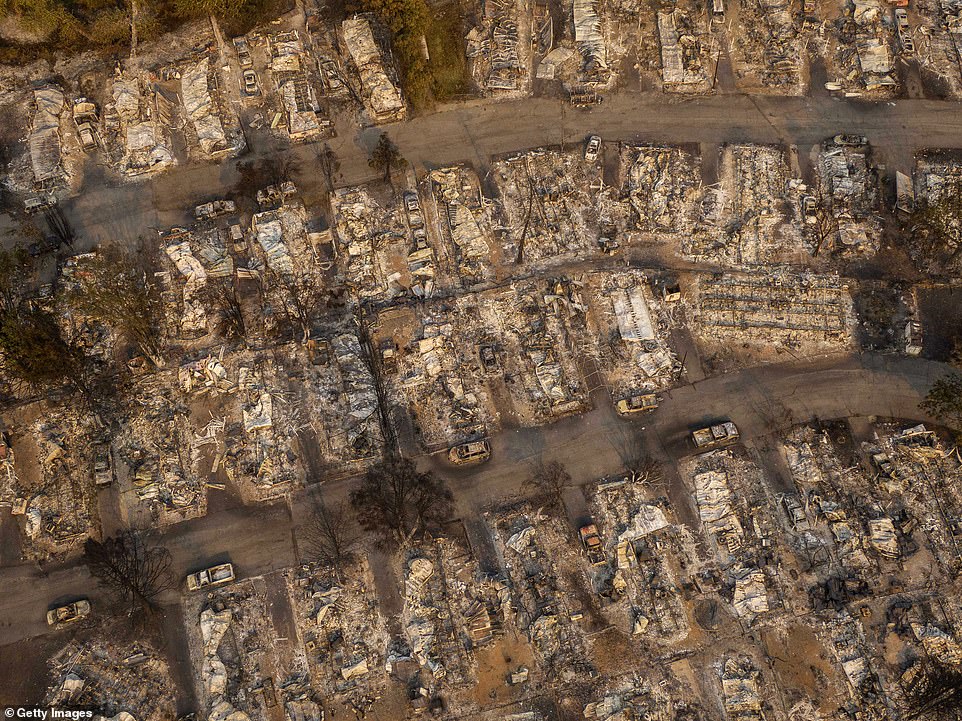 West Coast authorities have reported that at least 23 people have died in wildfires that are raging in California, Oregon and Washington state. This aerial view shows a mobile home park in Phoenix, Oregon, that was destroyed by a fire 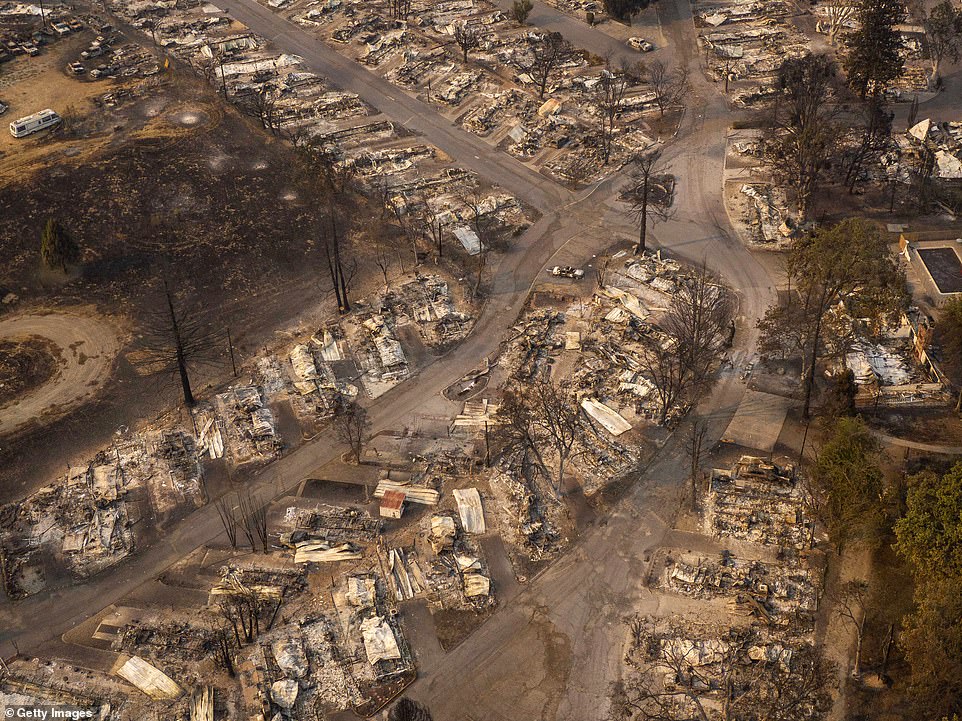 Hundreds of homes in Phoenix, Oregon (mobile home park pictured), have been lost due to wildfires in the state 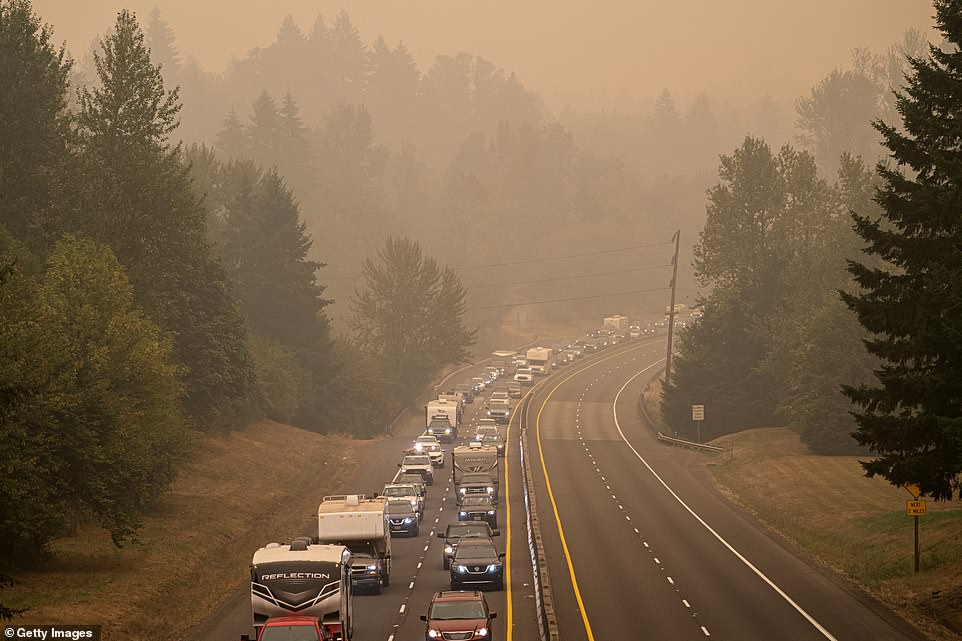 Oregon residents evacuate north along highway Highway 213 on Wednesday near Oregon City, Oregon. As of Thursday night, more than 500,000 Oregonians – 10 per cent of the state’s population – have been forced to evacuate 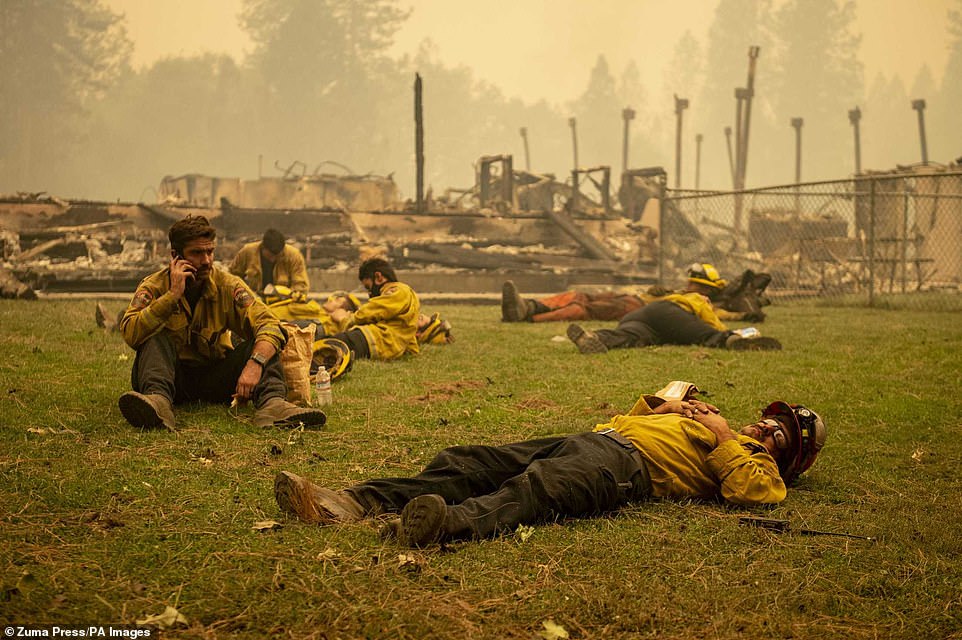 More than 14,000 firefighters are battling 28 fires across California, according to the Department of Fires and Forestry Protection. An exhausted Cal Fire crew were seen taking a break in the grass next to Berry Creek Elementary School, which was destroyed overnight during the Bear Fire on Wednesday 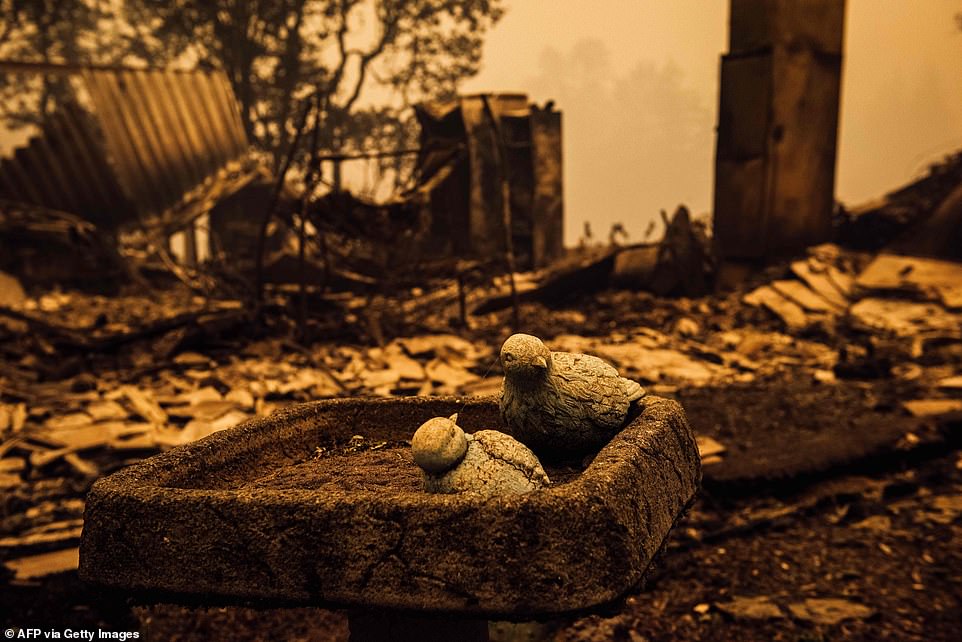 A bird bath is seen in front of the charred remains of a home after the passage of the Santiam Fire in Gates, Oregon, on Thursday 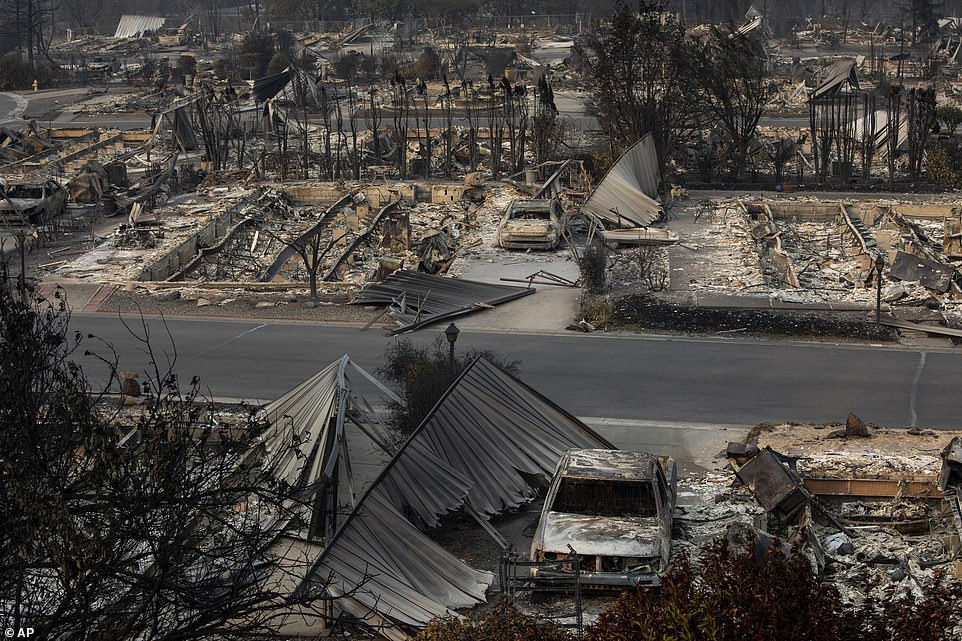 A neighborhood destroyed by fire is seen as wildfires devastate the region on Thursday in Talent, Oregon 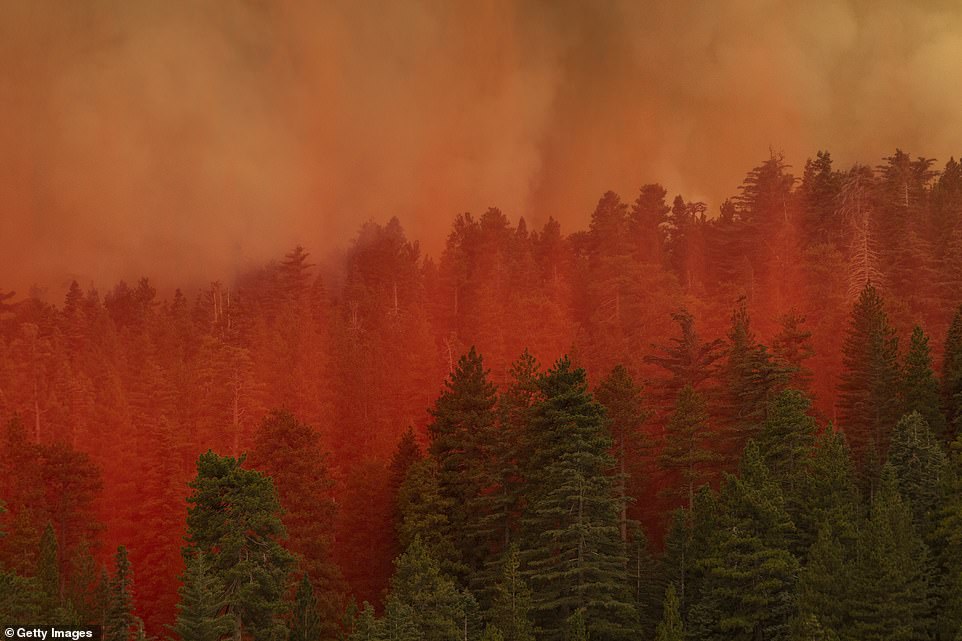 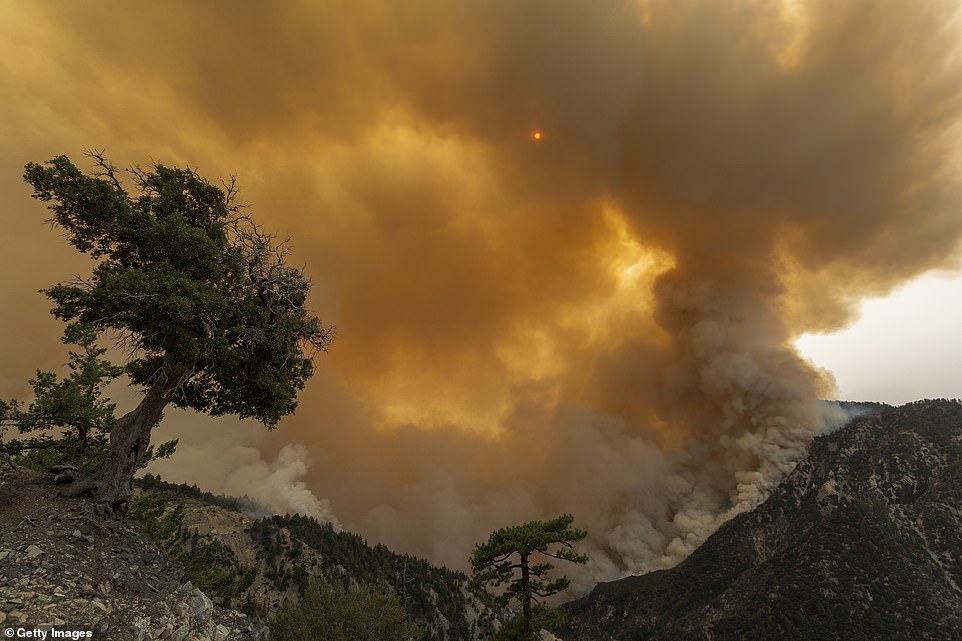 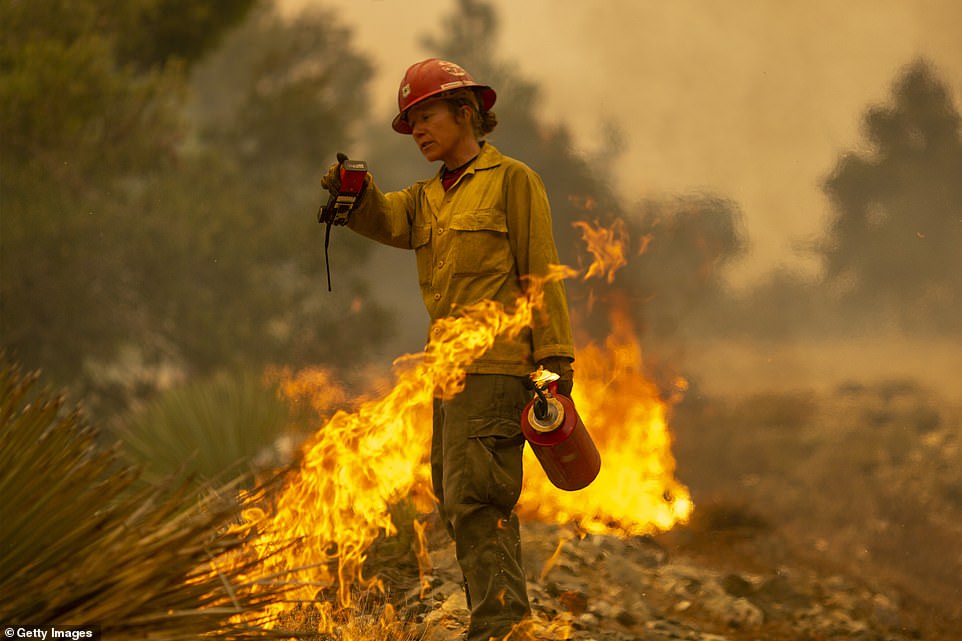 Authorities in Oregon said Thursday night that more than 500,000 people statewide were forced to evacuate due to wildfires. The latest figures come from the Oregon Office of Emergency Management. That’s over 10 per cent of the state’s 4.2 million population.

More than 1,400 square miles have burned this week in the state. Authorities say the wildfire activity was particularly acute Thursday afternoon in northwestern Oregon as hot, windy conditions continued.

In California, Butte County sheriff’s deputies and detectives found seven bodies on Thursday, a day after three other victims were discovered. Among those unaccounted for are Sandy Butler and her husband, who called their son to say they were going to try to escape the flames by finding shelter in a pond.

‘We’re still hoping and praying for good news,’ said Jessica Fallon, who has two children with the Butler’s grandson and considers them her own grandparents. ‘Everything is replaceable, but not my grandparents’ lives. I’d rather lose everything than those two. They kind of held the family together.’

More bodies could be found as crews manage to make their way into devastated areas. A team of anthropologists from Chico State University were helping in the search, sheriff’s Capt Derek Bell said.

The weeks-old fire was about 50 per cent contained when winds thrashed it into explosive growth on Tuesday, driving it through rugged Sierra Nevada foothills and destroying much of the town of Berry Creek.

More than 2,000 homes and other buildings had burned in the lightning-sparked collection of fires now known as the North Complex burning about 125 miles northeast of San Francisco.

Forecasters said there was some good news on the weather front: winds were expected to remain lighter this week in the fire area, while dense smoke actually knocked down the temperature slightly and was expected to kept the humidity somewhat higher.

The fire is among five this year that have set records for the most land ever burned, including a blaze that broke the mark Thursday as the largest ever.

More than 4,800 square miles have burned so far this year – more land than Rhode Island, Delaware and Washington, DC, combined – and fall is typically the worst season for fires. Nineteen people have been killed and nearly 4,000 structures have burned across the state. 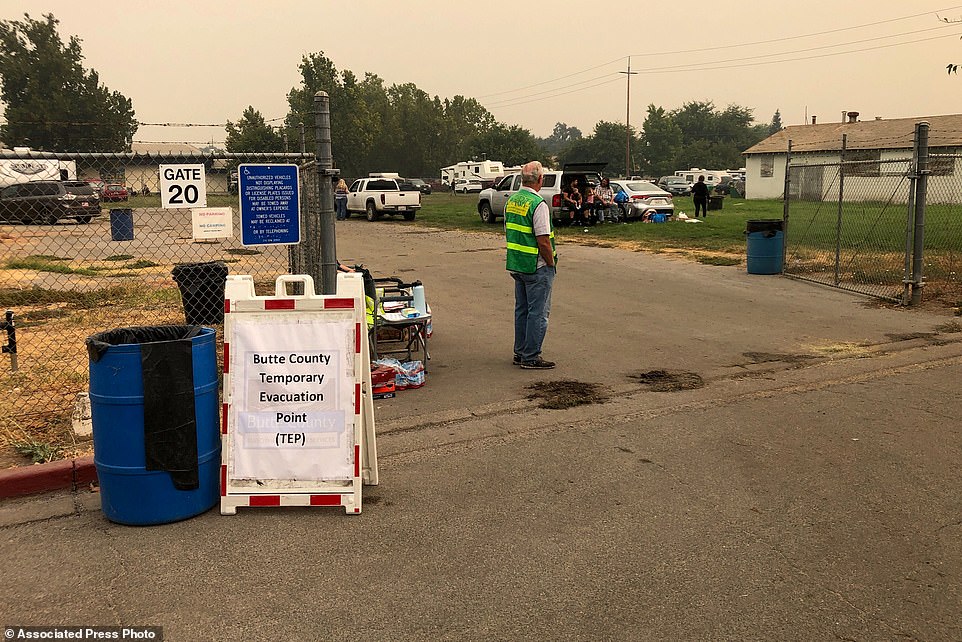 People fleeing from wildfires in Northern California gather at a temporary evacuation point in Gridley, California, on Thursday 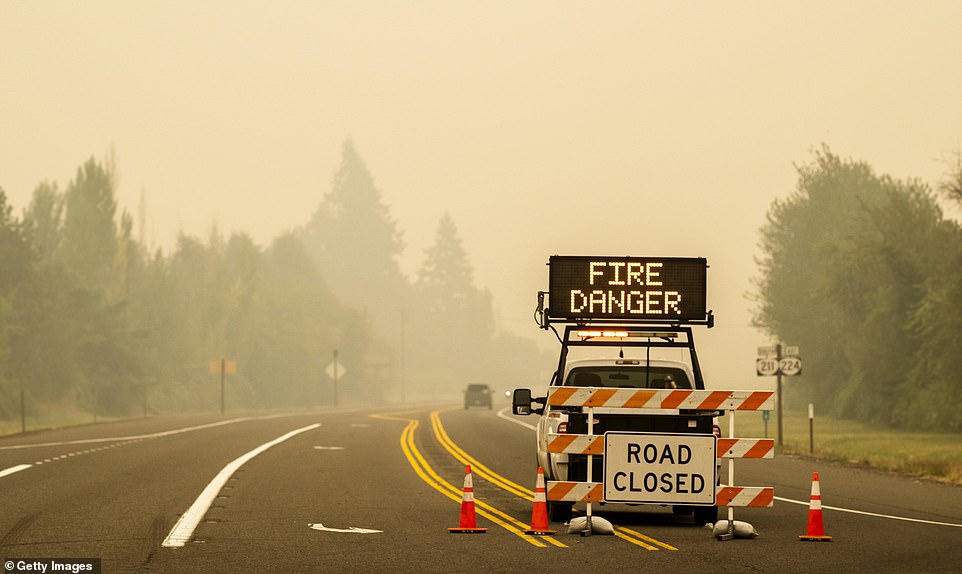 A sign warning of impending fire danger is posted on a roadway in Estacada, Oregon. Multiple wildfires grew by hundreds of thousands of acres Thursday, prompting large-scale evacuations throughout the state 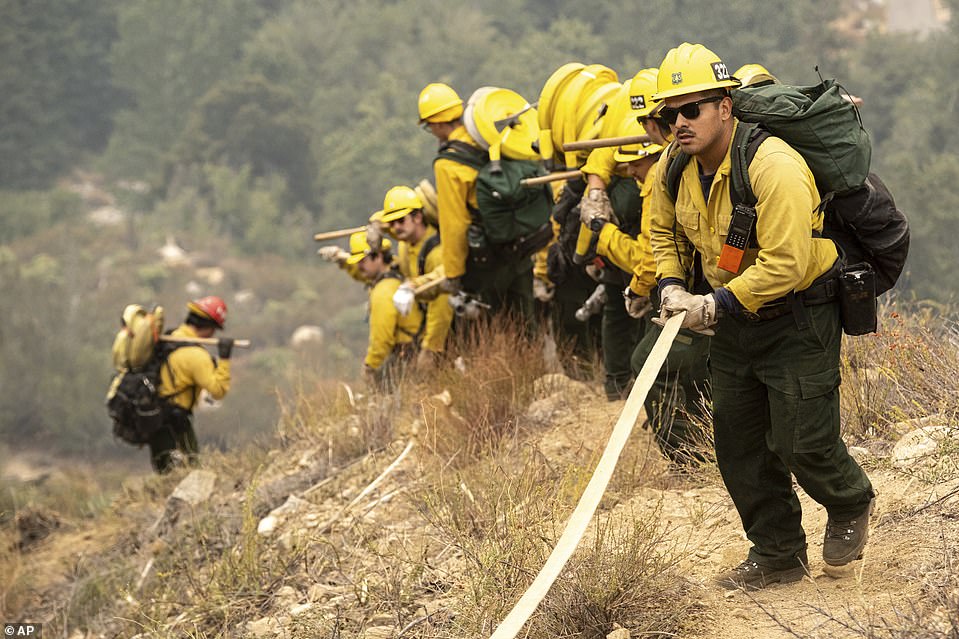 Members of the Mormon Hot Shots from Arizona lay hose line down rugged terrain off Highway 39 near Crystal Lake in front of the Bobcat Fire, which has burned more than 23,000 acres on Thursday 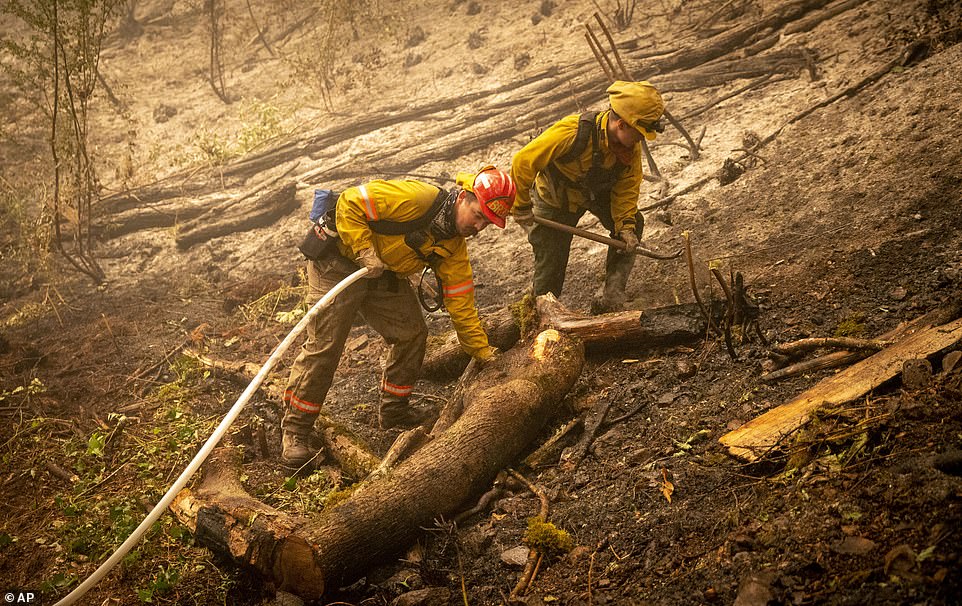 Firefighters work on mopping up a back burn near Leaburg, Oregon, on Thursday. A dearth of resources has hampered the fight against the Holiday Farm Fire 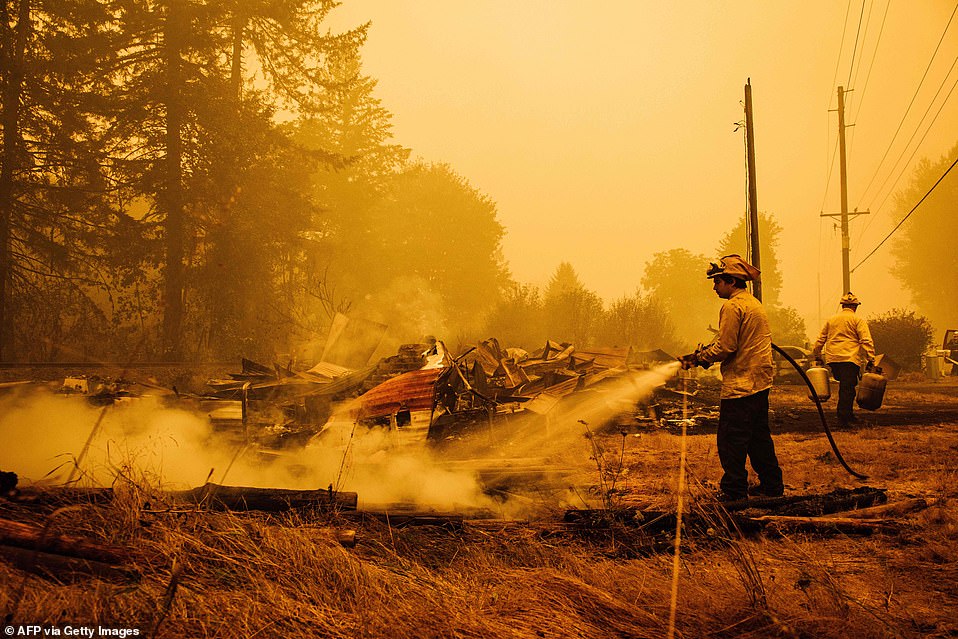 Oregon firefighters put out embers in Mill City, Oregon, on Thursday as they battle the Santiam Fire 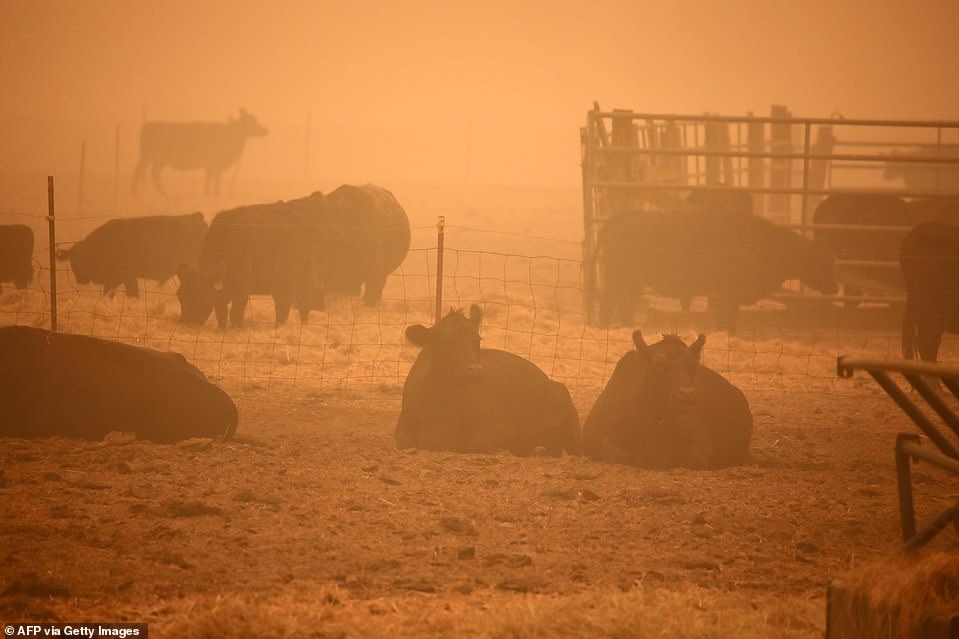 An orange smoke-filled sky is seen above Molalla, Oregon, on Thursday as fires burn nearby

The fires, fed by drought-sapped vegetation amid warming temperatures attributed to climate change, have spread at an alarming rate and given people less time to flee.

Hundreds of campers, hikers, and people spending Labor Day weekend at mountainside reservoirs and retreats had to be evacuated by military helicopters when they got stranded by a fast-moving fire that broke out in the Sierra National Forest in the center of the state during record-setting high temperatures.

President Donald Trump spoke with Gov Gavin Newsom on Thursday ‘to express his condolences for the loss of life and reiterate the administration’s full support to help those on the front lines of the fires,’ according to White House spokesman Judd Deere.

The North Complex fire is the 10th largest in the record books and growing as firefighters try to prevent it from advancing toward the town of Paradise, where the most destructive fire in state history two years ago killed 85 people and destroyed 19,000 buildings.

Authorities lifted an evacuation warning for Paradise on Thursday, the day after residents awoke to similar skies as the 2018 morning when a wind-whipped inferno reduced the town to rubble.

Under red skies and falling ash Wednesday, many chose to flee again, jamming the main road out of town in another replay of the catastrophe two years ago. About 20,000 people were under evacuation orders or warnings in three counties from the fire. 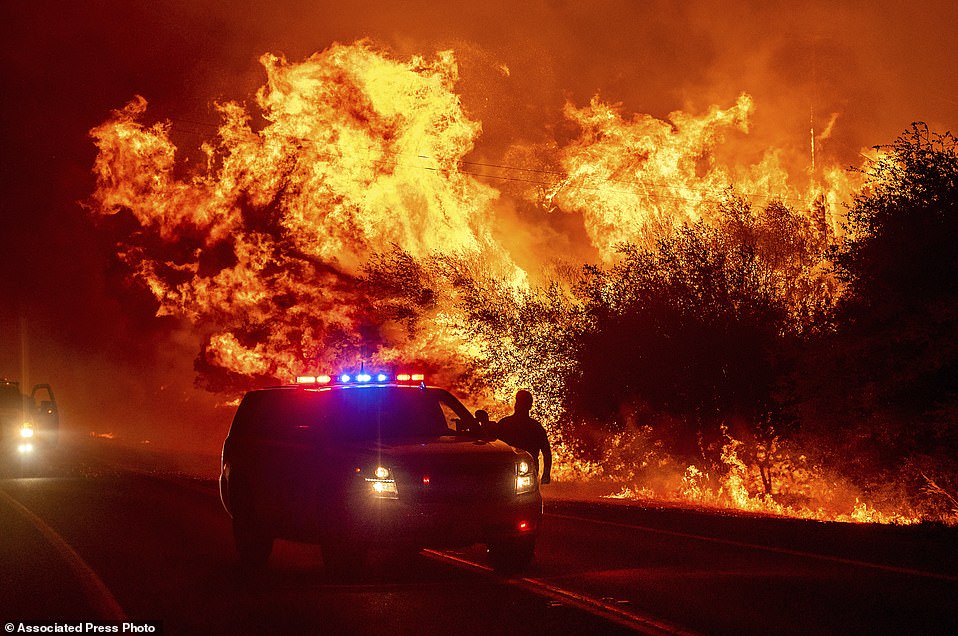 Flames lick above vehicles on Highway 162 as the Bear Fire burns in Oroville, California, Wednesday night. The blaze, part of the lightning-sparked North Complex, expanded at a critical rate of spread as winds buffeted the region 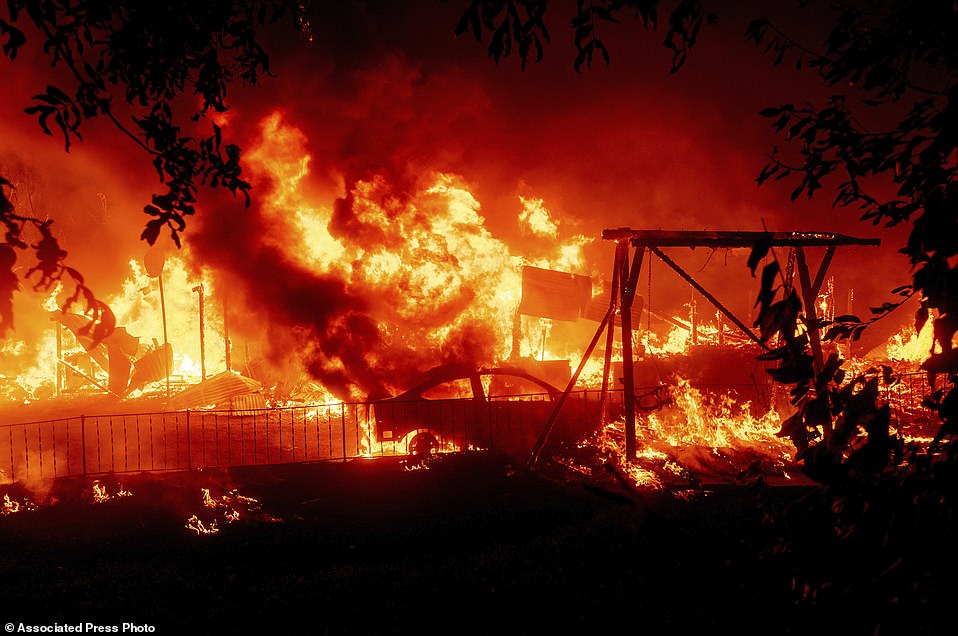 Flames consume a home and car as the Bear Fire burns through the Berry Creek area of Butte County, California, on Wednesday 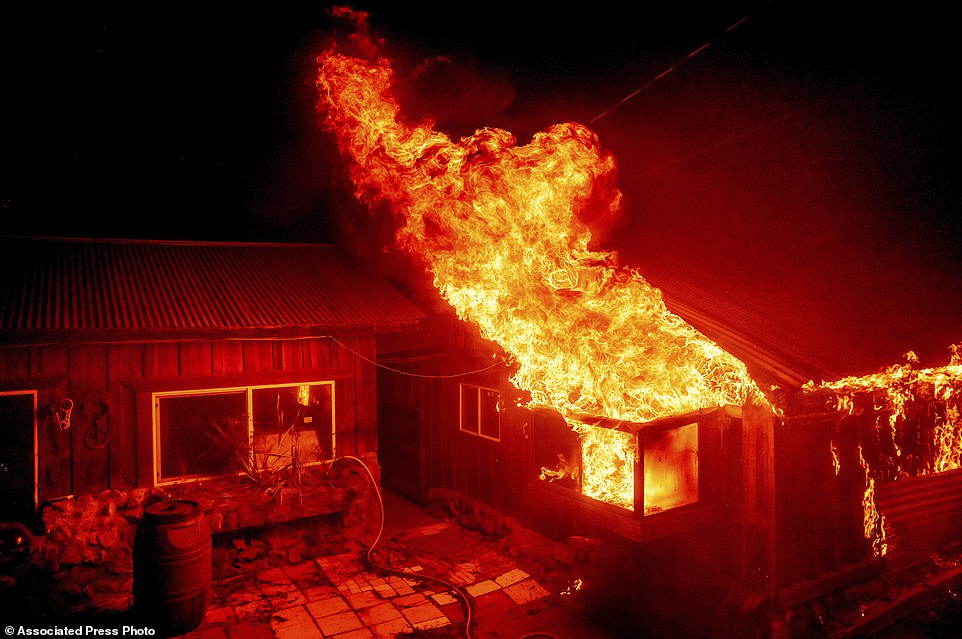 Flames shoot from a window as the Bear Fire burns through the Berry Creek area of Butte County, California, in Wednesday 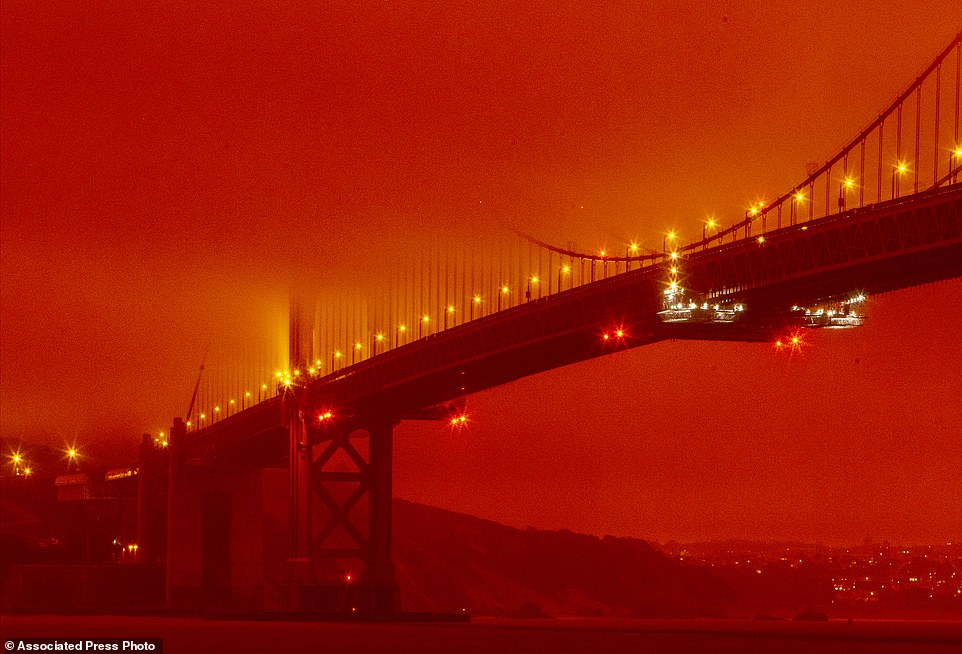 In this photo provided by Frederic Larson, the Golden Gate Bridge is seen at 11am Wednesday morning in San Francisco, amid a smoky, orange hue caused by the ongoing wildfires 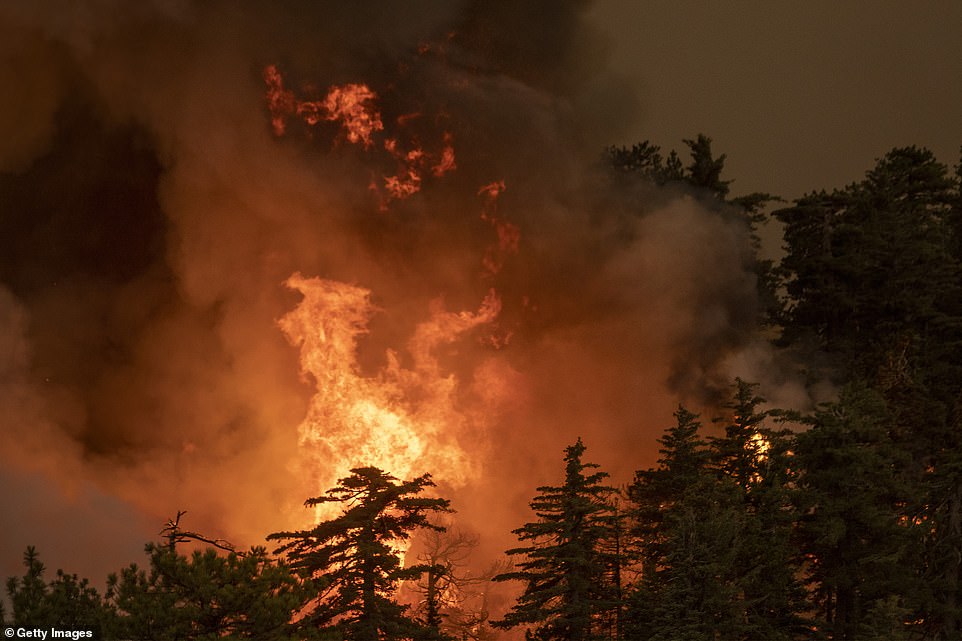 The Bobcat Fire consumes a forest in the Angeles National Forest on Thursday north of Monrovia, California

Some 14,000 firefighters continued to try to corral 29 major wildfires from the Oregon border to just north of Mexico, though California was almost entirely free of critical fire weather warnings after days of hot, dry conditions and the threat of strong winds.

Smoke blew into vineyards in wine country north of San Francisco, and rose above scenic Big Sur on the Central Coast and in the foothills and mountains of Los Angeles, San Bernardino and San Diego counties in the southern part of the state.

Numerous fires continued to burn in Washington and Oregon, as well, and dense smoke blanketed much of the West Coast on Thursday morning, darkening skies with hazardous air pollution.

Authorities in Washington state announced the arrest of a second person for intentionally starting a brush fire in Pierce County.

State troopers said a witness saw the man setting fire to grass with a match near State Route 512 and State Route 7 and called police. After a brief chase, troopers arrested the individual.

The recent arrest follows that of a 36-year-old Puyallup man who was taken into custody for allegedly starting a large brushfire which temporarily shut down state Route 167 and several ramps near Meridian Avenue.

In Oregon, a fire raging along the Oregon border destroyed 150 homes near the community of Happy Camp and one person was confirmed dead, the Siskiyou County Sheriff’s Office said. About 400 more homes were threatened.

The fire that roared into the hamlet of Berry Creek, with a population of 525, incinerated countless homes and largely destroyed Camp Okizu, a summer getaway for children with cancer.

A crew fighting the fire was overrun by flames when winds shifted and its members escaped with only minor injuries after deploying emergency shelters. It was the second time in two days that firefighters in California had to take the rare last-ditch effort to save their lives.

Fallon, who had driven from the San Francisco Bay Area after hearing the Butlers were missing Wednesday morning, waited with her toddler son and 2-year-old daughter with dozens of evacuees gathered at a fairgrounds in the small city of Gridley, trembling in morning cold. 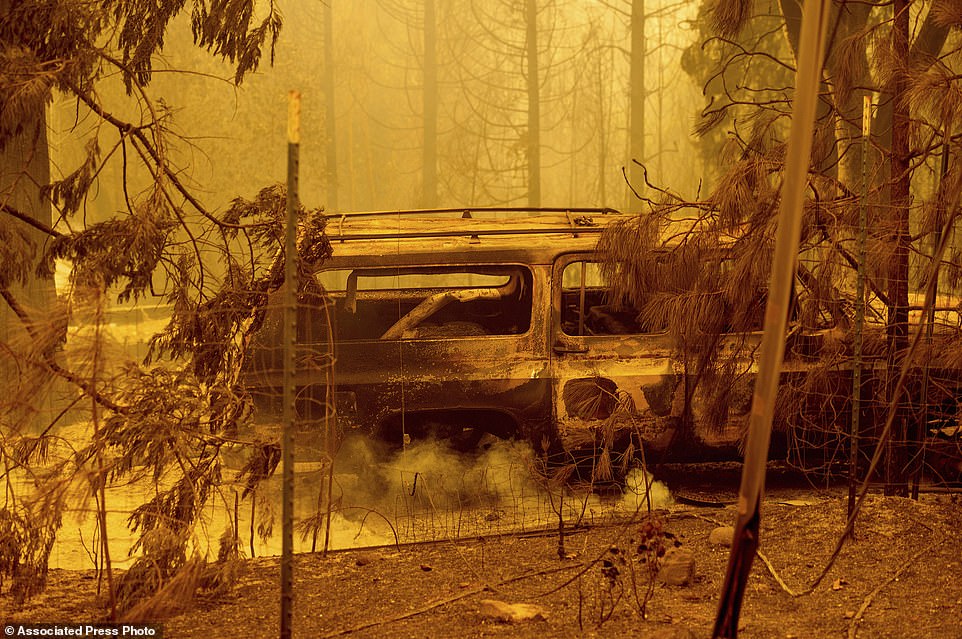 A scorched car rests in a clearing following the Bear Fire in Butte County, California, on Wednesday 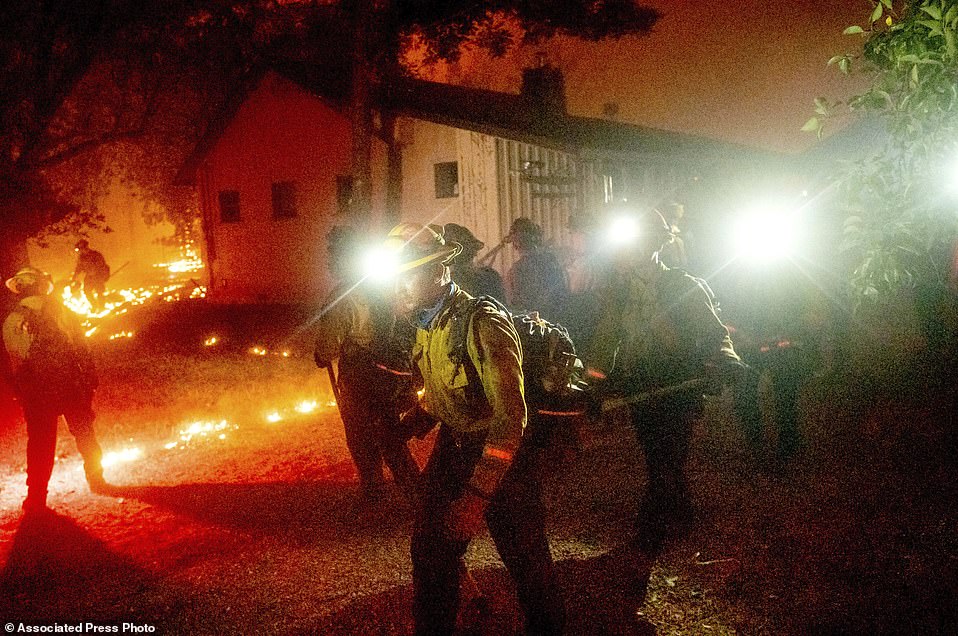 A hand crew works to save a home as the Bear Fire burns through the Berry Creek area of Butte County, California, on Wednesday 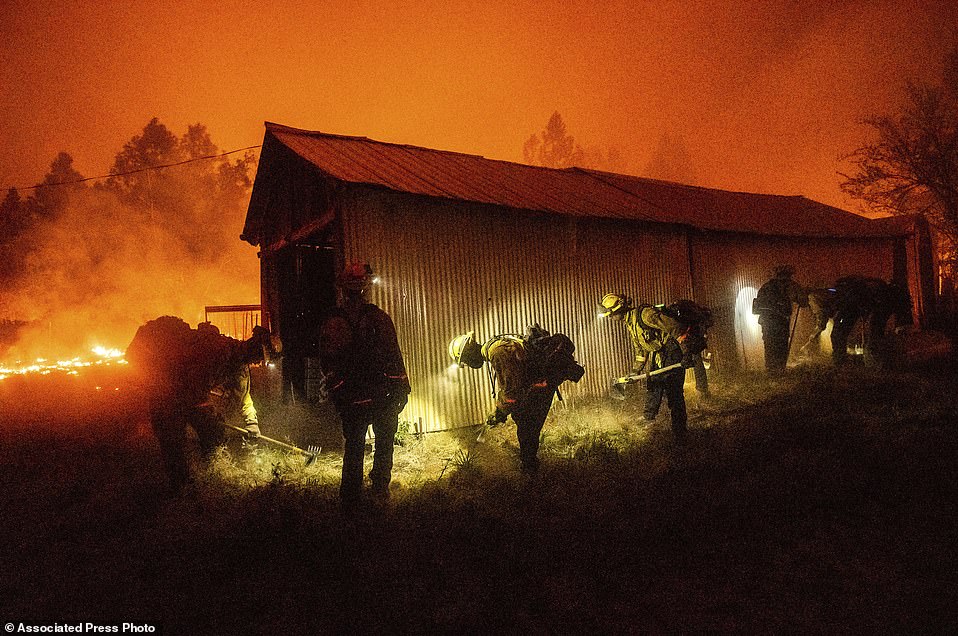 A hand crew clears vegetation from around a barn as the Bear Fire burns through the Berry Creek area of Butte County, California, on Wednesday

Among them was Douglas Johnsrude, who packed up his eight dogs and fled his home in the community of Feather Falls on Tuesday.

Johnsrude said he assumed his house trailer burned, which would be the second time he’s lost his home in a fire. He inherited his mother’s house after her death, but it was destroyed in a 2017 fire.

‘The reason I haven’t rebuilt up there is because I knew it was going to happen again. And guess what? It happened again,’ he said. ‘Seeing the smoke and the flames and everything else, it’s unreal. It’s like an apocalypse or something.’

Butte County spokeswoman Amy Travis described the evacuation center as a staging area while officials line up hotel rooms for families displaced by the fire amid the COVID-19 pandemic.

‘COVID has changed the way we do sheltering,’ she said. ‘We don’t have a lot of hotel rooms here in Butte County, and a lot of them are definitely busy with people that have already made their own hotel arrangements for evacuations.’

Fallon said she’d been peppering hospitals with phone calls in search of her grandparents.

Her daughter, Ava, doesn’t understand what´s going on. She thinks they’re camping. The girl typically speaks with her great-grandmother two to three times a day.

‘I´m tossing and turning. I have just such bad anxiety. I´m just really worried about my grandparents,’ Fallon said. ‘I’m hoping that they’re up there sitting in some water waiting to be rescued.’