Mask are poised to become mandatory in indoor venues in Los Angeles in the coming weeks as Democratic officials panic over rising Covid cases.

The county’s Covid response policy states that after a period of ‘high’ Covid transmission, a mask mandate will be triggered. In previous instances the period was set for 14 days.

Los Angeles County is recording 3,186 daily Covid infections a large increase from the 1,000 daily cases recorded at the start of November. It is also recording eight deaths each day.

Dr Barbara Ferrer, LA County’s director of public health, said Thursday that the locality was moving from ‘low’ to ‘medium’ Covid transmission. If case and hospitalization trends continue, it will reach ‘high’ by next week, she warned.

Covid has been replaced as the respiratory virus causing the most issues for Americans, with flu and respiratory syncytial virus (RSV) cases filling up hospitals around the US. 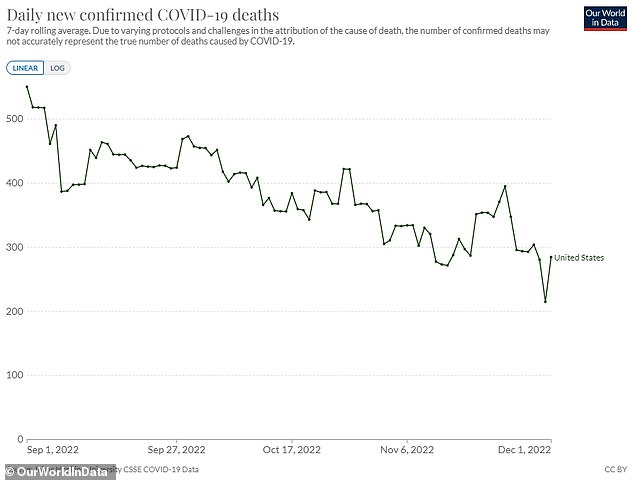 ‘We would be back to saying our health care system is getting stressed out, we need to slow down transmission,’ Dr Ferrer said during a news conference Thursday.

She did not specify when exactly the masks would return, but she had previously set a timeline of two weeks. 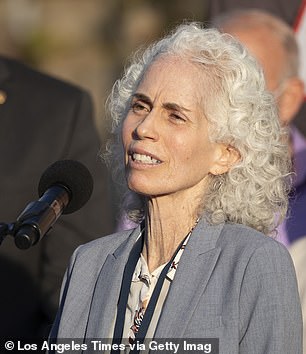 Dr Barbara Ferrer (pictured), LA County’s director of public health, warned Thursday that the health care system was being ‘stressed out’ by a recent increase in cases and hospitalizations

‘We’ll have to look at the rate of increase and what we’re seeing in terms of that to decide what that time frame [to reinstate masks] would be,’ she added.

The Southern California county, which is home to nearly 10million residents, only dropped its mask order in March.

If it does return, Angelinos will be forced to where masks at the gym, at concerts, sports venues and other indoor facilities.

According to Los Angeles County Covid policy, the mandate is to return after 14 days with ‘high’ transmission.

This will mean that residents will have to wear face coverings in indoor public places like gyms, entertainment venues and on public transportation.

Los Angeles nearly brought back its mask mandate in July, when it reached high Covid transmission level for 13 days – before dropping just before it went into place.

It is also recording 674 daily Covid hospitalizations and a test positivity rate of around 11 percent.

These categories are determined by the CDC and take into account Covid case and hospitalization figures. Death counts are not a part of the calculation.

A county must per recording less than 200 weekly cases and less than 10 Covid hospitalizations per every 100,000 residents to be considered ‘low’.

Next major COVID variant IS poised to be more deadly, doctors warn

The world’s next major Covid variant is poised to be more severe than the mild strains that are currently world-dominant, according to a new study.

The ultra-infectious Omicron strain emerged almost exactly a year ago and its mutated spinoffs have risen to the top in virtually every country in the world.

They are far milder than the older versions of the virus and many researchers believed they represented a kind of end game for Covid’s evolution, which like many viruses before it, mutate to be more mild so they can spread more easily.

But researchers in South Africa say the virus still has the potential to get deadlier after examining an immunocompromised HIV patient who harbored the virus for half a year.

Infected Covid patients also have to take up less than 10 percent of available hospital beds.

Los Angeles is recording 196 weekly infections per 100,000 members of the population, falling just below the threshold.

Falling between 10 to 19.9 Covid admissions per 100,000 or 10 to 14.9 percent of hospital beds used by these patients places a county into ‘medium’ transmission.

This is where Los Angeles currently stands at the start of December.

Officials fear that hospital admissions will either reach 20 per 100,000 residents or 15 percent hospital capacity next week.

If either mark is reached, the CDC will classify the county as an area with high Covid transmission.

If a county is recording more than 200 weekly infections per 100,000 residents – with less than ten hospitalizations taking up under ten percent of beds, then they are considered to be suffering medium transmission.

Counties with more than 200 confirmed cases each week and more than ten hospitalizations per 100,000 – or with more than one-in-ten beds used by Covid patients – are under ‘high’ transmission.

Bringing back the mask mandate in would be a controversial move as many Americans have already moved beyond the COVID-19 pandemic.

Christina Pushaw, popular right wing media personality and aide to Florida Gov Ron DeSantis wrote on Twitter: ‘I will be there for Christmas and will not comply.’

Susan Shelly, a columnist for Los Angeles Daily News, wrote that bringing back indoor masks would be less about public health and more for government control.

‘The problem with government recommendations is that government isn’t in the business of giving advice,’ she said. 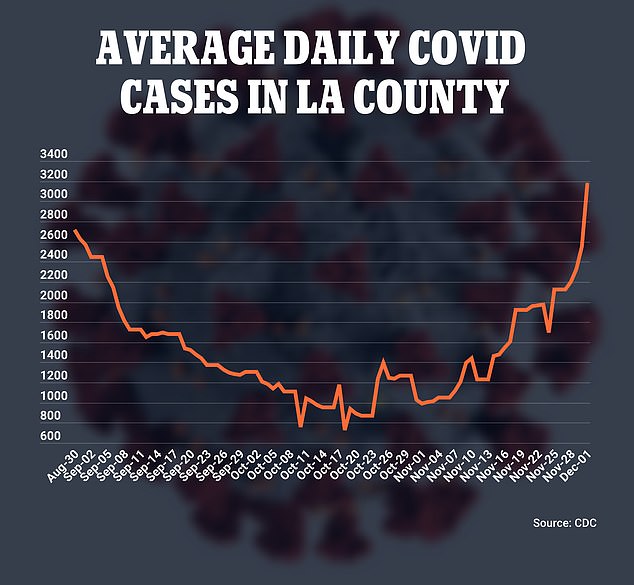 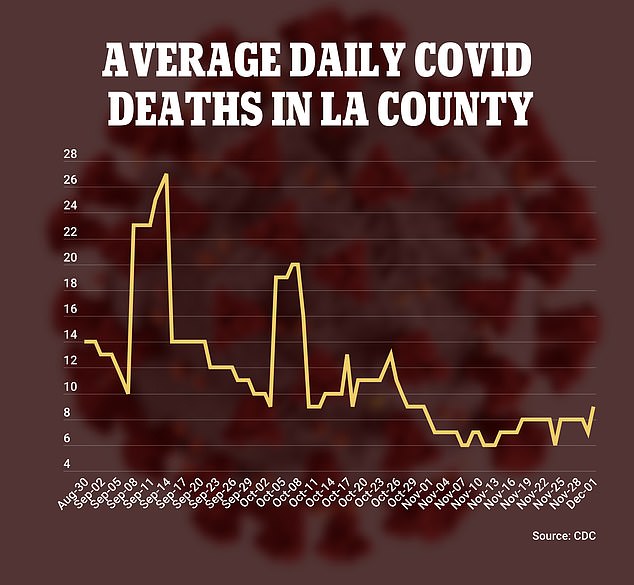 Deaths on Los Angeles have sharply fallen over the past three months, reaching four per day at the end of November. According to most recent data, the county is recording seven daily deaths

When the issue arose over summer, the health departments of both Long Beach and Pasadena – which fall within the county – said they would not comply.

Beverly Hills Mayor Lili Bosse, a Democrat whose city falls within LA County, also said she would not enforce the order.

Covid has been on the decline nationwide in recent months.

Daily infections have spiked in the past two weeks, though, jumping 22 percent.

The CDC also reports 274 daily Covid deaths in the US.

This has led to demand for the bivalent COVID-19 booster, tailored to the Omicron variant, falling flat in its rollout.

Only 40million Americans have received the shot since it first became available at the end of August – just 1 percent of the population.

Despite the shot’s minimal coverage, Covid cases have not spiked. An expected late summer surge never materialized and cases in late fall have not reached the same levels as previous years.