Lotto winner, 51, still works as a dinner lady 18 years after her win

Lotto winner, 51, still works as a dinner lady and lives in a council house 18 years after scooping £1.7million jackpot – and says the best thing she bought was a CARAVAN

A dinner lady who scooped £1.7 million on the National Lottery in October 2003 still lives in her old family council house and continues to work in a school despite her good fortune.

Trish Emson, 51, and her partner Graham Norton, 51, continue to work near their home in Rotherham, South Yorkshire.

Instead of spending money on new cars and big houses, Ms Emson has refused to let the win change her life.

Trish Emson, pictured, and her partner Graham Norton, left, scooped £1.7 million in the National Lottery in October 2003 – two weeks before the dinner lady from Rotherham, South Yorkshire fell pregnant with their son Benjamin 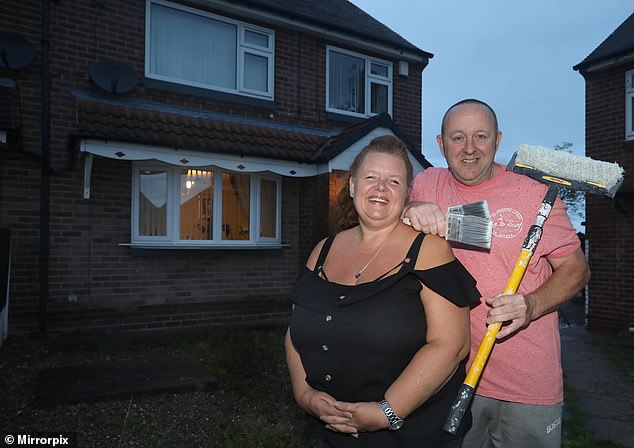 Ms Emson, left, pictured with partner Mr Norton, right, still live in the same council house where they made their home before scooping £1.7 million on the lottery in October 2003

Even the cheque for £1.7m in October 2003 was not her biggest piece of good fortune. Two weeks after winning the lotto she fell pregnant, giving birth to their son Benjamin – who is now a 17-year-old sixth form student at his local comprehensive school.

Ms Emson told The Mirror: ‘Being rich doesn’t make you posh or a better person. I don’t like showing off and bragging about money and I can’t be posh anyway.

‘To look at me you wouldn’t think I was a millionaire, but if I have to dress up I feel fake, I prefer my jeans.

‘We’ve been careful. I don’t buy flash cars, I’ve got a Kia and I still shop in Primark. The best thing we bought was the caravan in Cleethorpes. It’s a big un. Actually I’ve got two now.

‘I bought one for my family and friends, for when they come down.’

Ms Emson said she has been on a few holidays in areas in Spain such as Benalmádena, Benidorm, Ibiza.

She also took her mother on a cruise.

Ms Emson said she would have handed all the money back to get pregnant and start a family.

She said she and her partner were trying for five-and-a-half years before falling pregnant a fortnight after her big win.

She added: ‘I really believe it was thanks to winning the lottery that I did get pregnant. I had my mind on something else and it just happened.’