Gardener Simon Smith prides himself on his prize-winning carrots.

The 53-year-old sales manager traditionally grows crops for their quality, but this year’s harvest included one carrot which is rather more special for its quantity – as the huge veg stands as tall as his six-year-old grandson Oscar.

Mr Smith uses his back garden hobby as a form of therapy with his grandson, who has autism and is deaf, and said the child was delighted with the 4ft-long vegetable.

The sales manager grows his carrots in sand using 6ft-deep drums on a raised bed at his home in Loughborough, Leicestershire, using ground seaweed, compost and super phosphates to generate root growth.

He said: ‘When I dug the carrot out it measured 1.2m – literally as tall as Oscar, but a section of the thin tap root came off at the bottom so it would have been even taller.

‘He’s used to be growing carrots and takes them all into school. I never grow for size but when I last put carrots down for seed in 2015 they were bigger than my normal ones so I was expecting a larger crop this year.

‘All the other carrots in the drum were above average length, but none came near this one.

‘You can’t predict what nature will do but we have had an ideal growing season with plenty of sunshine and rain, so that must have had something to do with it.’ 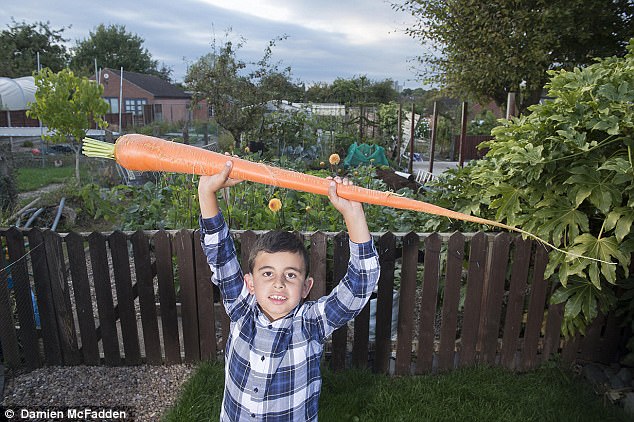 Mr Smith spoke to the Daily Mail as a gardener in Minnesota, USA, claimed a new record for the world’s biggest carrot – grown from seed supplied by Mr Smith via a website which specialises in seed likely to produce giant vegetable varieties.

American grower Chris Qualley, 34, produced a carrot weighing in at an impressive 22lb 4oz, beating the previous Guinness world record of 20lb 1oz, set in 2014 by giant vegetable specialist Peter Glazebrook from Newark, Nottinghamshire – who is a friend of Mr Smith.

Father-of-three Mr Smith, married to Leesa, 50, a council worker, said the giant varieties – developed for their weight rather than length – are grown differently, being dug up two weeks after germination.

Gardeners then cut of a section of tap root to ‘shock’ the vegetable into regenerating and growing lots of roots. 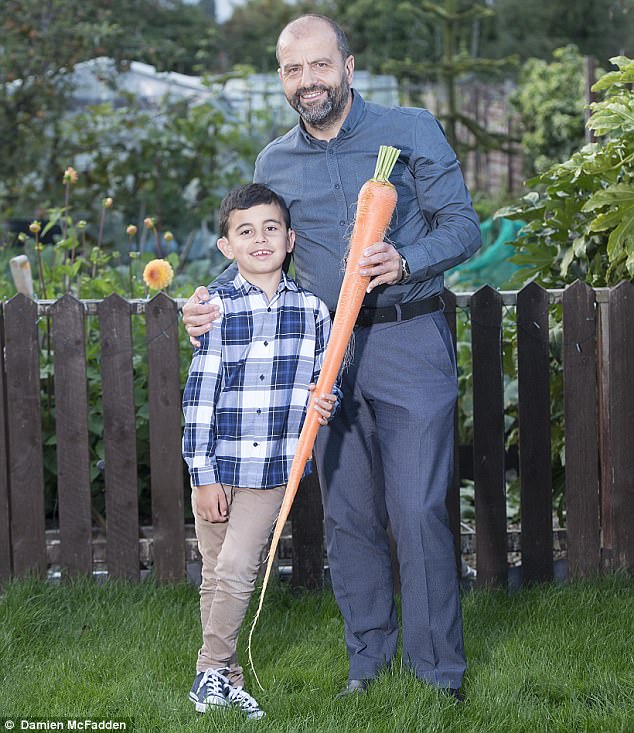 Mr Smith spoke to the Daily Mail as a gardener in Minnesota, USA, claimed a new record for the world’s biggest carrot

He added: ‘The difference is that my carrot will taste just as good as any other from my back garden, where as I suspect the giant varieties will be as tough as old boots.’

Mr Smith plans to take the carrot along to the national championships of the National Vegetable Society in Malvern, Worcestershire, this weekend, where he is entering a set of regular size carrots.

Eat your veg and you could grow up to be like this astronaut-shaped carrot, which is doing the rounds on social media sites. 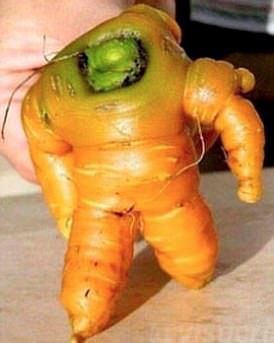 He added: ‘We have to enter in sets of five. If I’d had another four bigger carrots I’d probably enter them in the giant category, but the bigger they get, the more imperfections they develop so they are not likely to achieve success in the quality section.’

He will be joined in Malvern by green-fingered David Thomas, 49, of Leedstown, Cornwall, who is hoping to beat a five-year-old record for the biggest cabbage, which currently stands at 136lbs and was set by an Alaskan gardener.

Mr Thomas says he will wait until the cabbage can be placed on scales at the show before discovering if he has broken the record, for fear of damaging the vegetable in the meantime.

He added: ‘I’m a little worried about loading and unloading it. I could take a leaf off and they weigh about five to ten pounds each.’