Louisa Lytton has spoken out on battling coronavirus soon after giving birth to her first child last month.

The EastEnders actress, 32, who plays Ruby Allen on the BBC soap, welcomed daughter Aura with her fiancé Ben Bhanvra in September- but the couple both contracted coronavirus soon after the arrival of their newborn.

Louisa explained during an appearance on Loose Women on Thursday: ‘It was difficult because I had a long labour which resulted in an emergency C-section and just as we were finding our feet, we then both got Covid.

‘So it’s not been the best start, but she’s been fine throughout, so that’s all we can ask for really.’

The star went on to explain she tried her best to prepare herself for parenthood but admitted she felt there was nothing that could ready her for becoming a mother.

She said: ‘I just don’t think anything prepares you. I read every book, I spoke to every friend and she’s the best thing that’s ever happened to us, but it is tough.’ 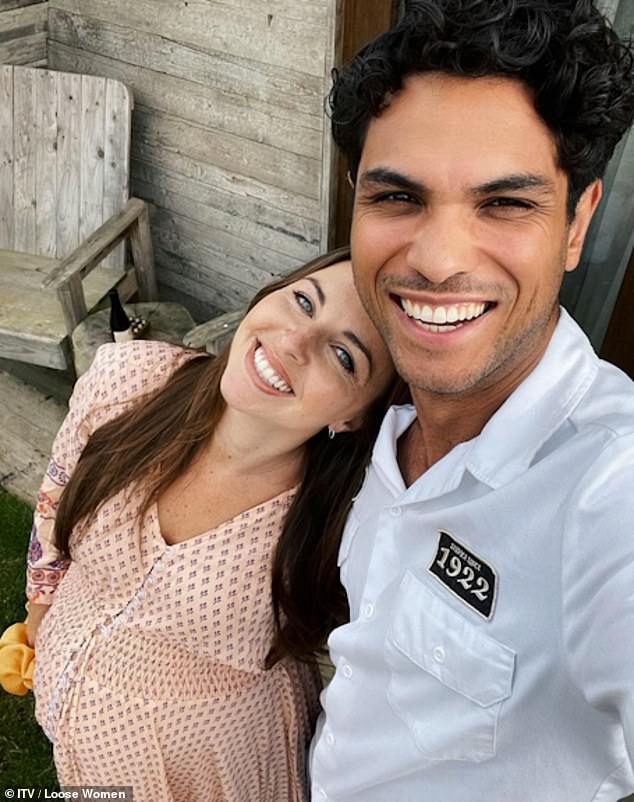 New parents: The star, who plays Ruby Allen on the BBC soap, welcomed her daughter with her fiancé Ben Bhanvra but they both contracted coronavirus soon after the birth

Louisa is currently taking time out from EastEnders after giving birth, but says she’d happily return to the show in the future, and may even let Aura star as her on-screen child.

‘Yeah I could,’ she said. ‘Definitely, if I go back, it’ll be with a child, whether she wants to be part of it, who knows.’

The couple were expecting a boy throughout Louisa’s pregnancy and were surprised when they welcomed a little girl. 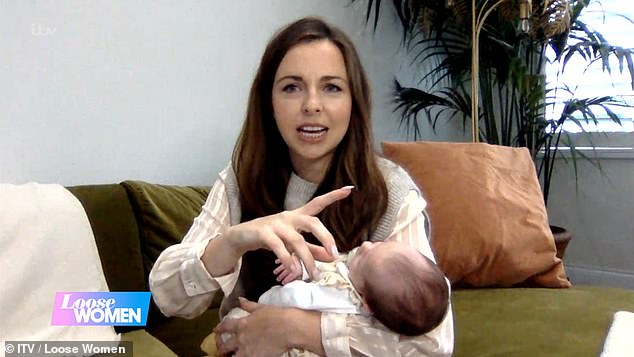 Speaking out: Louisa said on Loose Women: ‘It was difficult because I had a long labour which resulted in an emergency C-section and just as we were finding our feet, we both got Covid’ 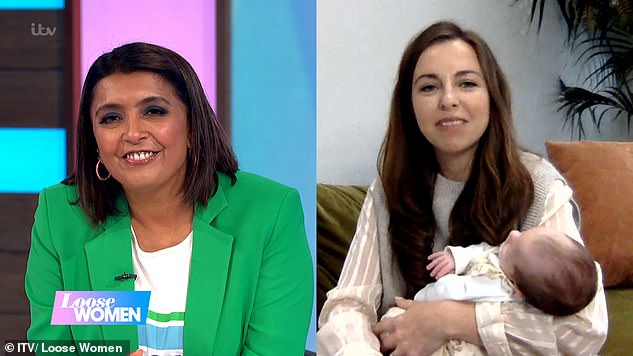 Sweet: Louisa admitted they struggled to name her at first as she and Ben had been considering boys’ names but they eventually settled on Aura

Louisa admitted they struggled to name her at first as she and Ben had been considering boys’ names but they eventually settled on Aura.

‘Throughout my whole pregnancy we thought we were having a boy, so we had a shortlist of girls’ names and boys’ names,’ explained Louisa. ‘But we forgot about the girls’ names. Ben found it somewhere…

‘When we then had her, it was such a shock to the system that we didn’t name her for the first few days because we hadn’t thought about it, so we went back to list and it seemed to be the name that suited her the most.’ 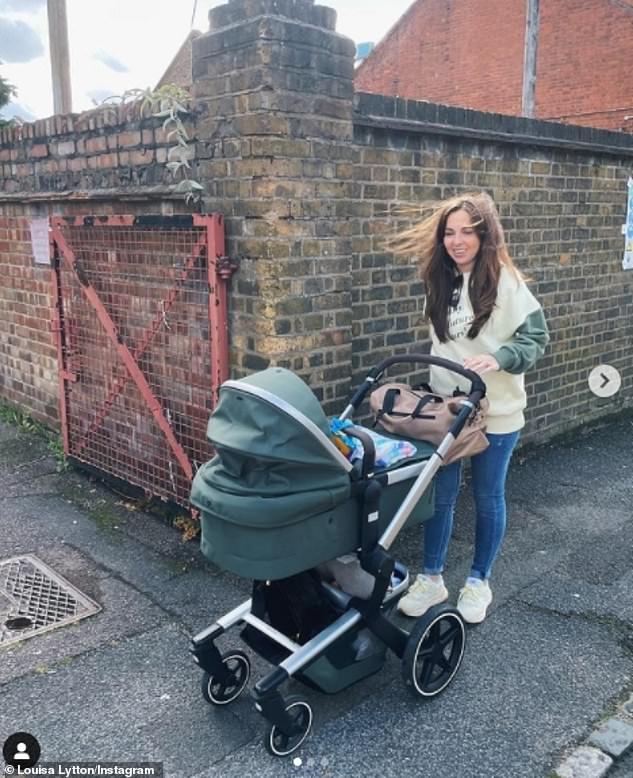 Secret battle: Louisa revealed on Instagram she ‘made it out of the house’ on Sunday after a secret battle with COVID-19

Louisa revealed she had secretly battled Covid earlier this week when she took to Instagram to share photos of herself pushing her first born in a pram.

She told her fans she was ‘unable to taste’ due to ‘long Covid’ and also said washing her hair had been ‘the biggest achievement of September’ but noted she’s ‘getting back on track’.

The actress wrote: ‘Made it out of the house today! *takes a bow* Its official the Instagram picture opportunity days are over.

Update: The soap star, who welcomed a daughter last month, told her fans she was ‘unable to taste’ due to ‘long Covid’ 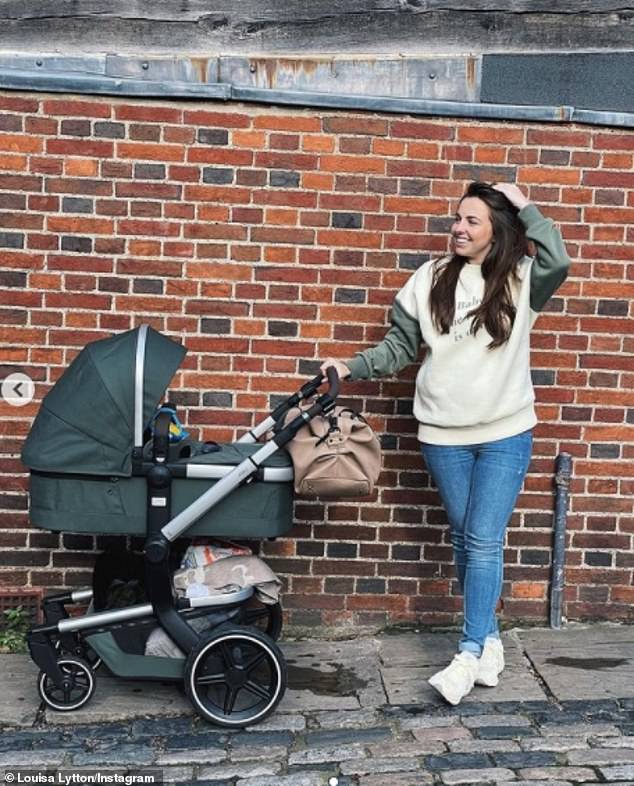 The mother-of-one concluded: ‘Aura slept whilst we ate a WHOLE meal (which I couldn’t taste thanks long covid)’ [sic]

‘This is as good as it gets Washing my hair was the biggest achievement of September . Wait, it’s now October.’ [sic]

The mother-of-one concluded: ‘Aura slept whilst we ate a WHOLE meal (which I couldn’t taste thanks long covid) But I feel like we are on the right track, I wouldn’t change it for the world May our love bubble continue.’ [sic]

It came after Louisa revealed she’s named her baby daughter Aura Olivia after she welcomed her first child following a three day labour.

Louisa told OK! Magazine, ‘She was a few days early but after my contractions started, she really took her time.

‘I was in labour for three days and I ended up having an emergency C-section. Clearly she’s going to be very dramatic like her mum!’ she quipped. 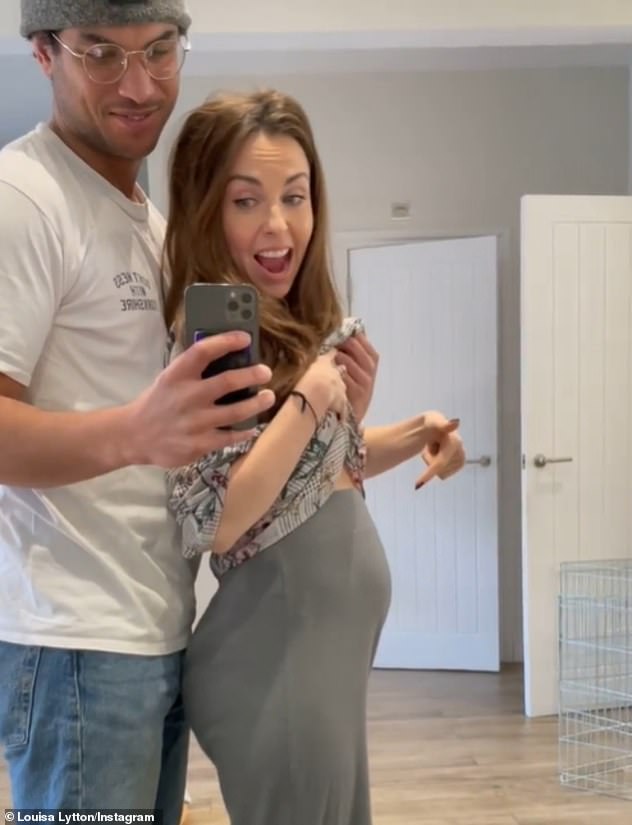 Baby on board! Louisa and her fiancé Ben announced her pregnancy in a heartwarming Mother’s Day post in March

Explaining that Olivia is her grandma’s middle name, Louisa added, ‘People keep asking us where Aura came from, but we don’t really know! It was on our list. We just both loved the name, and we don’t know anyone else with it.’

The former Strictly Come Dancing constant admitted she and her partner sobbed when they met their tot for the first time since it was ‘such an ordeal to get her there’.

Louisa and her fiancé Ben Bhanvra announced her pregnancy in a heartwarming Mother’s Day post in March. 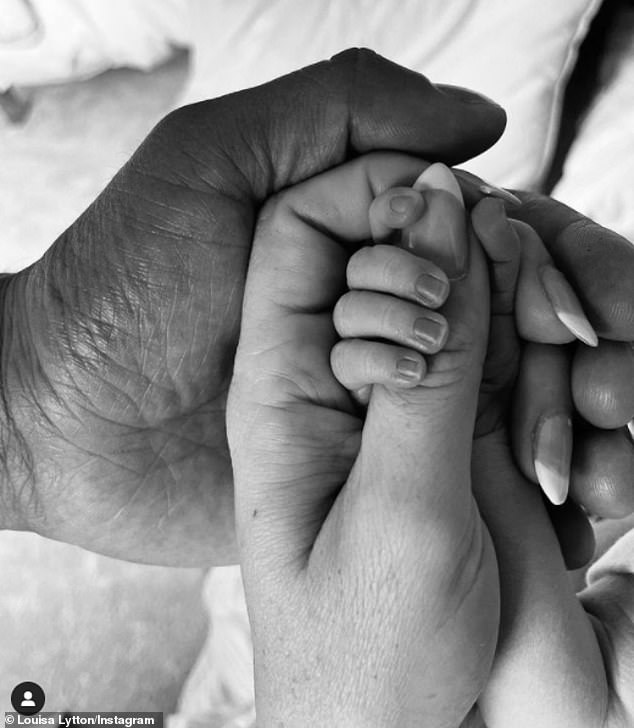 Sweet: The EastEnders star shared her little girl’s name in an interview with OK!, revealing she ended up giving birth through emergency C-section