A Louisiana police officer who caused outrage after he shared a racist image on Facebook has been appointed his town’s police chief.

Back in 2017, Wayne Welsh, then assistant police chief of Estherwood, shared a meme depicting a white mother forcing a blond girl’s head under water in a bathtub.

The caption of the image read: ‘When your daughter’s first crush is a little n***o boy.’

Wayne Welsh has become the chief of police in Estherwood, Louisiana, despite being embroiled in the controversy two years ago

Welsh was briefly suspended from his job after sharing it, and he later apologized.

But when the spot for police chief opened up last year, he became the interim for nine months before running unopposed for the job last November. 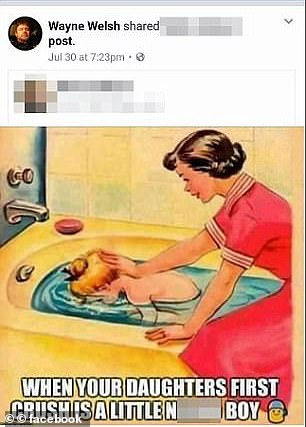 When asked about his past controversy Welsh told CNN: ‘What happen(ed) two years ago is behind me and my punishment was done to me and now I’m moving forward with my life and as the new chief of police.’

At the time of the incident, however , a seemingly peeved Welsh explained that he saw the meme on his Facebook wall and decided to share it because he did not think it was racist.

‘I just don’t feel like I should have to resign on this because there is not a policy saying I can’t do this on Facebook,’ said Welsh.

‘To me, I’m not racist and I knew it wasn’t. It was picture that everybody shared and you can get on anybody and still see it. It’s still there, but I was wrong for sharing it for being a police officer.’

Welsh insisted that this incident does not reflect how he conducts himself in his professional capacity as a police officer. 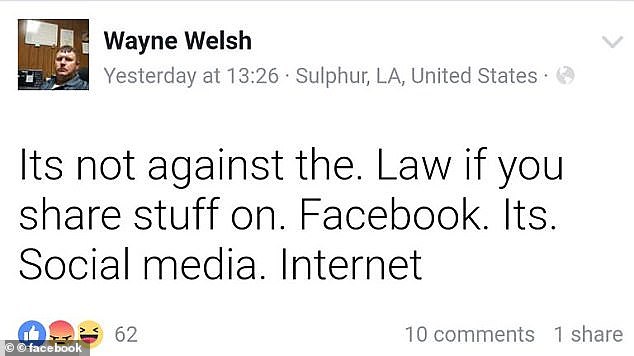 Initially Walsh defended his actions, claiming what he did was ‘not against the law’ in a separate Facebook post

‘I treat everybody the same and you can ask anybody in town, if you walk around. They all like me and I do my job right,’ he said.

Estherwood is a village in Acadia Parish with an overwhelmingly white population of fewer than 1,000 people.