Louisiana Senator John Kennedy has walked back on his controversial comments that Ukraine meddled in the 2016 presidential election and hacked the Democratic National Committee’s emails, instead of Russia.

Speaking on CNN’s Cuomo Prime Time on Monday the 68-year-old Republican said: ‘I was wrong. The only evidence I have, and I think it’s overwhelming, is that it was Russia to tried to hack the DNC computer.’

On Sunday he doubled down in his support of the unsubstantiated theory that Ukraine interfered in the 2016 election, during an appearance on Fox News Sunday.

During the Fox News appearance host Chris Wallace asked: ‘Who do you believe was responsible for hacking the [Democratic National Committee] and Clinton campaign computers, their emails. Was it Russia or Ukraine?’

Louisiana Sen. John Kennedy, 68, walked back on his comments made on Sunday that Ukraine interfered in the 2016 presidential election during an interview CNN on Monday admitting, ‘I was wrong’

“I was wrong,” says GOP Sen. John Kennedy, backtracking after he repeated a debunked conspiracy theory that Ukraine interfered in the 2016 US election. “It was Russia who tried to hack the DNC computer. I’ve seen no indication that Ukraine tried to do it.” https://t.co/2RGqCkRALO pic.twitter.com/wD4P0joXSp

However, in 2017 American intelligence officials concluded that it was Russia who tried to interfere in the 2016 election and get Donald Trump elected as president while hurting Hillary Clinton’s campaign, not Ukraine.

The Senate Intelligence Committee and the Special Counsel Investigation led by Robert Mueller reaffirmed Russia’s role and agenda in meddling in the election and said Ukraine was not involved.

Mueller said during a sworn testimony this summer: ‘The Russian government interfered in our election in sweeping and systematic fashion.’

On Monday Chris Cuomo asked the senator: ‘Do you really believe it wasn’t Russia?’

‘I did an interview yesterday with Chris Wallace, I was answering one of is questions, and he interjected a statement and asked me to react to it. What I heard Chris say was only Russia tried to interfere in the election, and I answered the question. That’s not what he said,’ Kennedy explained.

‘I went back and looked at the transcript. He said only Russia tried to hack the DNC computer. Chris was right, I was wrong…I see no indication that Ukraine tried to do it,’ he added. 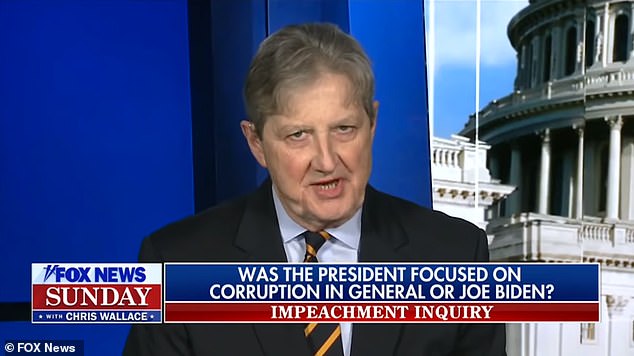 On Sunday he doubled down in his support of the unsubstantiated theory that Ukraine interfered in the 2016 election, during an appearance on Fox News Sunday 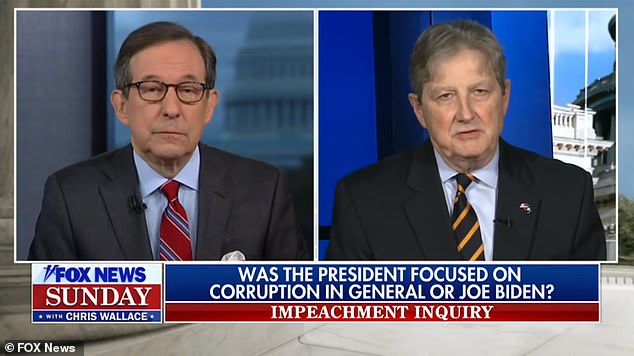 During the Fox News appearance host Chris Wallace asked: ‘Who do you believe was responsible for hacking the [Democratic National Committee] and Clinton campaign computers, their emails. Was it Russia or Ukraine?’ Kennedy replied: ‘I don’t know. Nor do you. Nor do any of us’

Cuomo then asked why Trump keeps saying Ukraine had to do with election meddling – a conspiracy theory that has become a major point in the House Democrats’ impeachment inquiry into Donald Trump.

‘Well here’s why. There is a lot of evidence proven and unproven that Ukraine tried to interfere, along with others, in the 2016 presidential election.’

He then cited a Politico and the Economist Magazine pieces on Ukraine’s involvement in the election. Cuomo noted that those articles raised question about Ukrainian involvement, but Mueller testified Ukraine was not a part of the Russian apparatus. 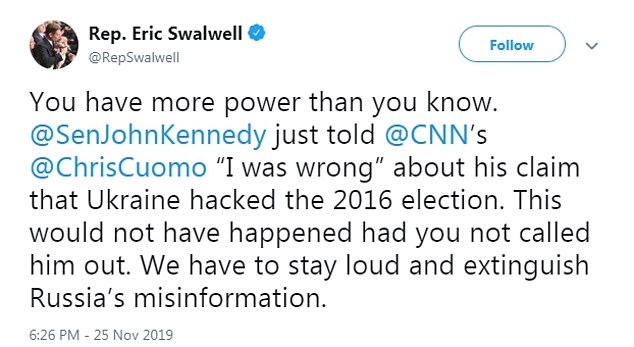 California’s Democratic Rep Eric Swalwell praised Kennedy’s walk back of his conspiracy comments, telling the public ‘We have to stay loud and extinguish Russia’s misinformation’

In the Impeachment Inquiry, National Security Council official Fiona Hill called the Ukraine interference conspiracy ‘a fictional narrative that is being perpetuated and propagated by the Russian security services themselves’ during a hearing last week.

Republicans are weilding this theory as a justification for why President Trump withheld military aid from Ukraine until the country agreed to carry out an investigation into the 2016 election.

Trump’s freeze of the aid is central the impeachment inquiry and in determining whether he leveraged the money to benefit himself politically. 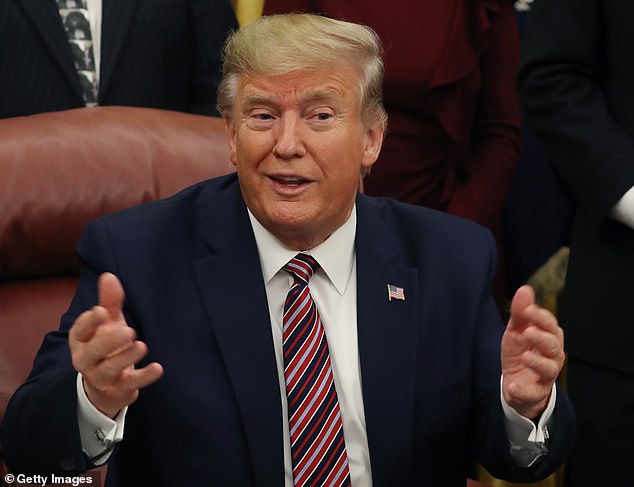 Trump and his followers have supported the debunked conspiracy theory that Ukraine was involved in the election meddling. However, the Senate Intelligence Committee and Robert Mueller’s investigation found Ukraine was not responsible for meddling in the election, Russia was 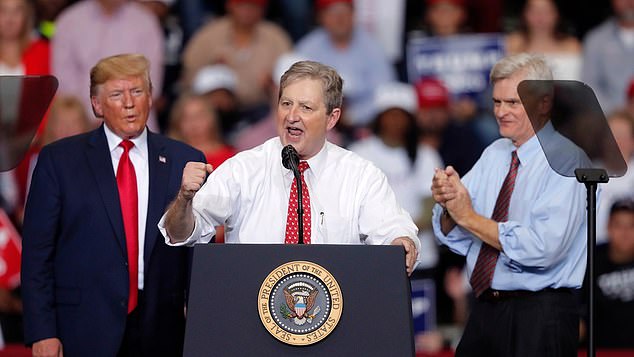 Kennedy is a staunch reporter of Trump and like many of the president’s followers, initially supported the Ukraine conspiracy theory

The inquiry is based on a July 25 phone call with Ukrainian President Volodymyr Zelensky in which Trump asked him to look into matters related to CrowdStrike, a US-based internet security company that initially examined the breach of the DNC, according to The Hill.

By reaching out, Trump was referencing the conspiracy theory that the Russians weren’t solely responsible for the DNC.

Senators also have been briefed by the Intelligence Committee that the Ukraine theory is a Russian misinformation effort, according to The Advocate.

Sen. Kennedy’s Ukraine comments come days after he promoted another conspiracy theory regarding the death of pedophile financier Jeffrey Epstein.

‘Christmas ornaments, drywall and Epstein — Name three things that don’t hang themselves. That’s what the American people think,’ Kennedy said during a Senate Judiciary Committee hearing on Tuesday with the head of the federal Bureau of Prisons. ‘They deserve some answers.’