A federal grand jury has indicted reality TV star Maurice Fayne on charges including running a Ponzi scheme for allegedly using emergency coronavirus Paycheck Protection Program loan for his trucking company to buy jewelry and put a down payment on a Rolls-Royce.

Fayne, 37, of Dacula, Georgia, was indicted on Wednesday, the US Attorney’s Office of the Northern District of Georgia said in a media alert.

He is charged with bank fraud, making a false statement to a federally-insured financial institution and money laundering, in addition to wire fraud in connection with a Ponzi scheme.

Maurice Fayne, 37, was indicted Wednesday by a federal grand jury in Georgia. His charges include bank fraud, money laundering and running a Ponzi scheme with his trucking company

The charges stem from an investigation into how Fayne allegedly used just over $2million in PPP loans that he received in April from United Community Bank, after claiming that his trucking business, Flame Trucking, had 107 employees and an average monthly payroll of $1,490,200.

He originally asked for a loan of $3,725,500, claiming that he would used the loan to ‘retain workers and maintain payroll or make mortgage interest payments, lease payments, and utility payments, as specified under the Paycheck Protection Program Rule,’ authorities said.

Instead, investigators found that he ‘allegedly used PPP loan proceeds to live a luxurious lifestyle that included leasing a Rolls Royce and purchasing expensive jewelry, as well as making payments to individuals involved in a Ponzi scheme.’ 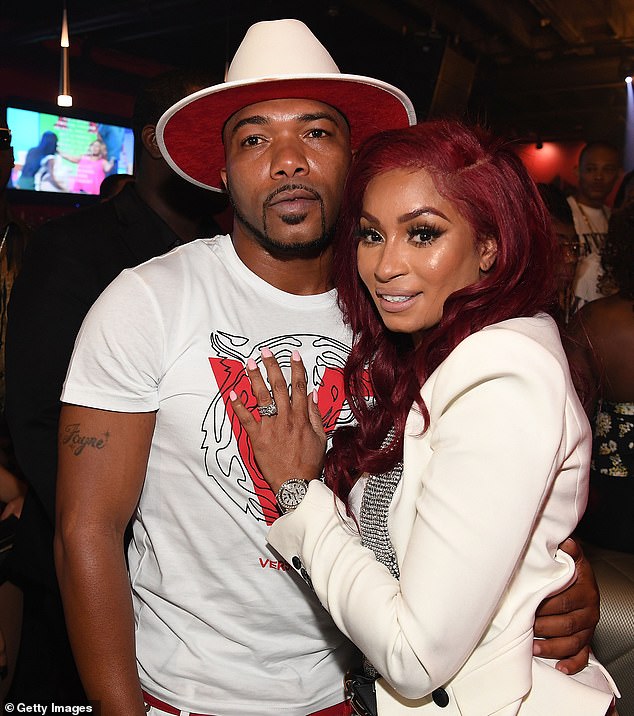 Fayne (pictured with Karlie Redd, right) is charged with allegedly using coronavirus Paycheck Protection Program loan money to buy things including a Rolex and pay past due child support

Authorities said that Fayne’s Ponzi scheme involved him posing as the owner of a profitable trucking company – Flame Trucking – from August 2014 through May 2020.

The business, however, never actually made enough money to cover its expenses, according to the US Attorney’s Office.

During that time, Fayne supposedly managed to get 20 people to invest over $5million in the company, promising to use the money to purchase and operate his trucks.

Instead, authorities said, he used the money to ‘pay his personal debts and expenses, and to fund an extravagant lifestyle for himself.’

Fayne allegedly transferred more than $5million to a casino to cover his personal gambling and entertainment expenses.

He also allegedly used $50,000 for restitution owed in a previous fraud case, $230,000 to associates who helped him run a Ponzi scheme and $907,000 to help an associate start a new business.

It’s unclear if the associates paid for the Ponzi scheme were also involved in the alleged Flame Trucking scheme.

Fayne’s loan spending apparently raised red flags at United Community Bank, due to the way he ‘allegedly structured those financial transactions to conceal and disguise the nature, location, source, ownership, and control of the proceeds.’

But, authorities said, Arvest Bank had closed Flame Trucking’s account in September 2019, so Fayne was aware that those statements he sent to United Community Bank were fraudulent.

Later, when interviewed by federal agents, Fayne claimed that he used the PPP loan to pay for the trucking company’s payroll and other business expenses, denying that he’d used them for personal expenses.

During the investigation, federal agents seized what they believed to be the proceeds of Fayne’s PPP bank fraud scheme.

According to his affidavit obtained in May by CNN, Fayne received $2,045,800 from United Community Bank in late April.

The court documents claimed that during his interview with federal agents, ‘Fayne told the agents that he believed he had the right to use part of the PPP loan proceeds for “other business purposes” and for “working capital.”‘

His attorney told CNN that there was ‘considerable confusion’ about PPP guidelines, ‘particularly around the question of whether and how business owners are permitted to pay themselves a salary or take an owner’s draw.’