Love Island 2021 contestants Shannon Singh and Hugo Hammond reportedly ditched their partners before signing up for the ITV2 dating show.

It has been claimed that OnlyFans’ Shannon, 22, had been dating a DJ since last year and they even went travelling earlier this year for three months.

While PE teacher Hugo, 24, who is the show’s first-ever disabled contestant, allegedly ditched two women before joining the show.

Hugo, who recently insisted in a promo that he is a ‘relationship kind of guy’, is said to have split from his long-term girlfriend earlier this year and had since been texting a different woman before ‘cutting contact’.

A source told The Sun of Shannon and her ex: ‘They both said they loved each other, so it was a real shock when she called time on their relationship out of the blue.’

They added: ‘She obviously felt Love Island was too big an opportunity to miss out on because she was already dating someone — even someone she seemed to really like. She’s clearly not averse to leaving broken hearts behind her.’

The former couple are said to have spent three months travelling together due to her ex’s job as a DJ which meant they were granted permission to go abroad. 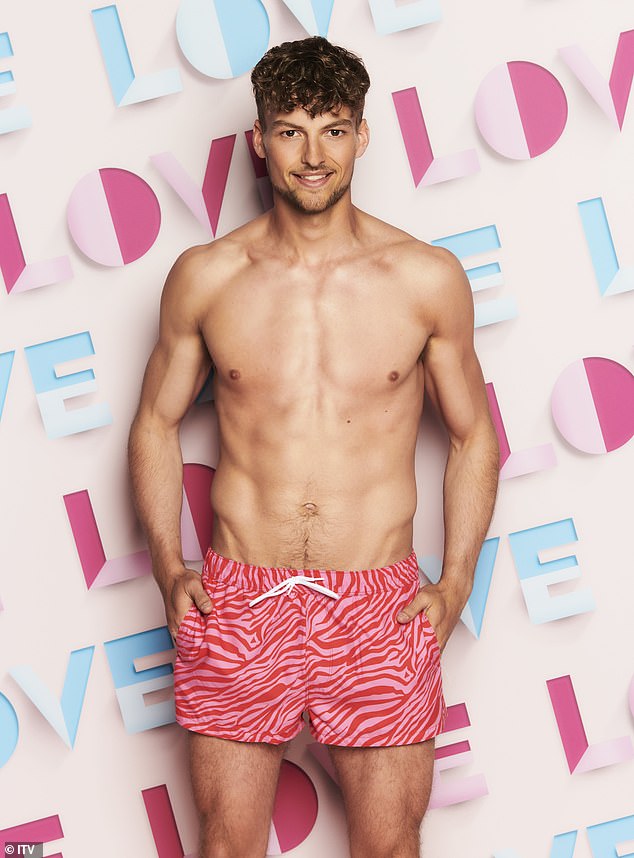 Elsewhere, Hugo, who said he has been ‘single for a while now’, celebrated his two-year anniversary with his ex-girlfriend in November.

The Islander is said to have started texting a new woman after ending his relationship with his ex.

A source told the publication: ‘Hugo was in contact with both right up until he got the call-up for Love Island at the last minute. He had ended their relationship, but she was hopeful they would get back together, because they were still talking.’

They added that Hugo ‘plays to his sensitive side’ and that he loves being the ‘centre of attention’. 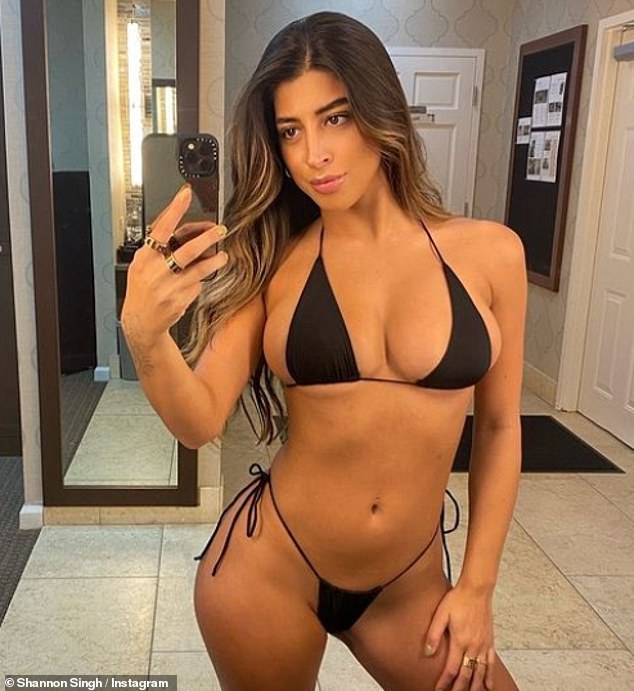 Ex? It has been claimed that OnlyFans’ Shannon, 22, had been dating a DJ since last year and they even went travelling earlier this year for three months

However, a different source, who is said to be ‘close’ to Hugo, insisted that Hugo and his ex ‘mutually split’ before Love Island.

MailOnline has contacted both Shannon and Hugo’s representatives, as well as Love Island, for comment. 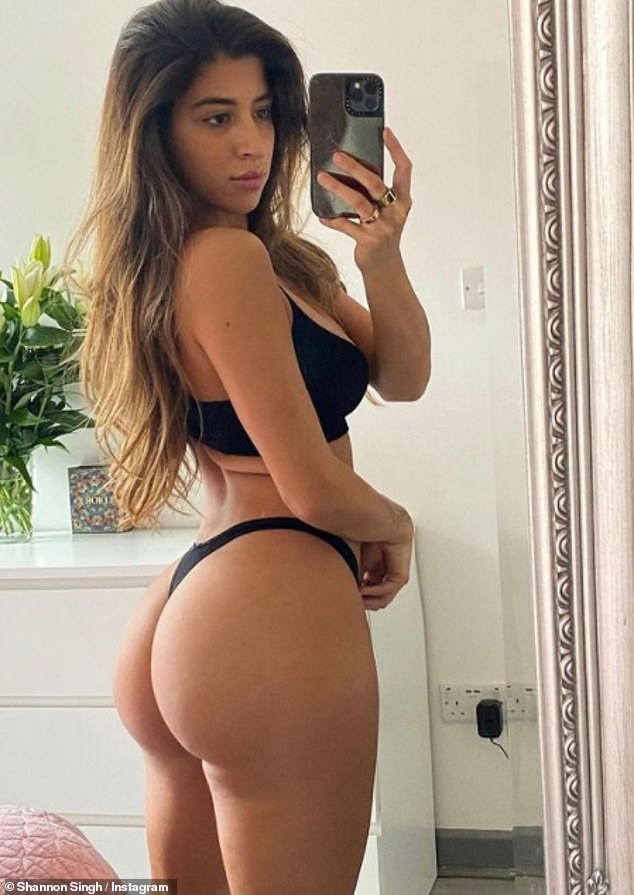 ‘Shock’: A source told The Sun of Shannon and her ex: ‘They both said they loved each other, so it was a real shock when she called time on their relationship out of the blue.’

It’s rumoured the British series may experience a crossover with its US counterpart, as both are being filmed at the same time, but bosses have yet to confirm the audacious move to ensure plot surprises are kept under-wraps.

Each confirmed contestant will be given thorough psychological and medical assessments by health experts before, during and after the series as part of the show’s duty of care protocols.

And every Islander must fully disclose their medical history to ensure the environment of the villa is suitable. 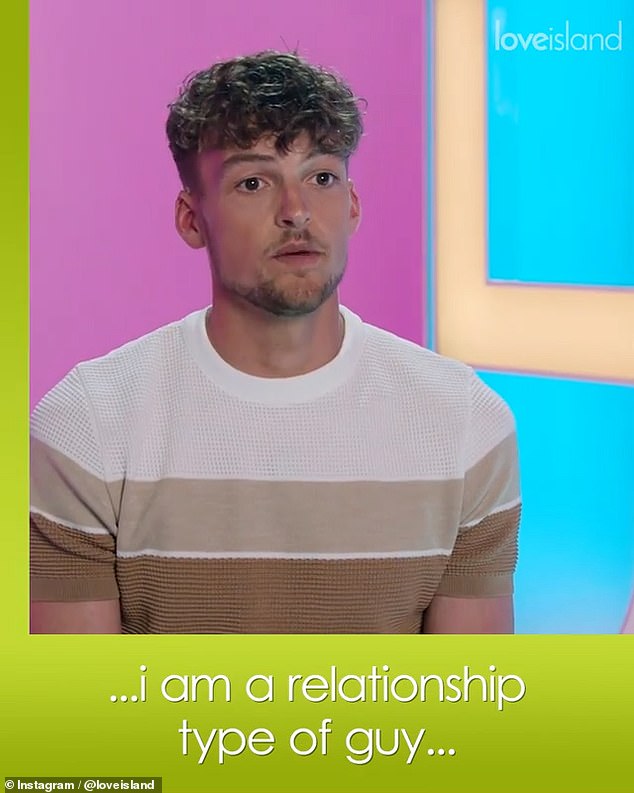 Relationship type of guy? Hugo, who recently insisted in a promo that he is a ‘relationship kind of guy’, is said to have split from his long-term girlfriend earlier this year and had since been texting a different woman before ‘cutting contact’

The 2021 summer series will be hosted by Laura Whitmore who featured in the show’s big teaser advert earlier this month.

The hit ITV2 dating show has not aired since February 2020 after both the summer 2020 and winter 2021 editions were cancelled due to the coronavirus pandemic.

Love Island returns on Monday June 28 at 9pm on ITV2 and the ITVHub.

Who is their type on paper? ‘I’ve been single for a while now. With the current climate, it’s been really hard to get back into dating.

‘I saw it as an opportunity to have an amazing fun summer and put myself back out there.’

Who is their type on paper? ‘I don’t feed off looks, I feed off energy, I need someone with personality. Just someone I can have fun with.

‘I’m a party girl, I love going out, I’m very social. For me it’s quite hard to find people who are genuine and looking for what you’re looking for’

Who is their type on paper? ‘Looks wise, always gone for blondes. But for me, the main thing is having respect and having good fun, and someone who will be loyal to you…

‘I’ve had messages from girls that have got boyfriends and husbands. This is why I don’t trust anyone. Someone who is loyal really. But when I’m single, I like having a good time!

Who is their type on paper? ‘I like meeting new people, I’m ready to be in a relationship. Why not be in a place where people are looking for the same things as me?’

Who is their type on paper? ‘I like a good build. I go to the gym. I want someone who is funny. Really funny and caring and will do nice little things for you.

‘And then obviously someone who you can depend on to not ditch you. Because I am quite a big character and quite loud, they would have to be as loud, if not more.

‘I could never be with someone who is quiet. Someone that gives you a bit back’

What is her type on paper? ‘Someone that will put me in my place. Someone that makes me laugh. But also someone that takes my banter. I’m like a five-year-old in a playground, if I like you, I will make a mockery of you and laugh and joke. That is my really terrible flirting skills. I need someone who can take that.’

Who is their type on paper? Sommer Ray from Instagram. Zara McDermott, she’s a good-looking lass. Or Megan Fox.

How would he describe himself? ‘Optimistic. I always see the bright side in the worst situations. I’m a fun guy when I go on a night out. Responsible guy as well.’