Love Island participant Ollie Williams’ Twitter account caused fury among viewers of the show when it claimed the 23-year-old has ‘better legs than a gazelle’, a day after it was revealed Ollie has taken part in big game hunting.

This came hours before the announcement on Tuesday that Ollie has quit the ITV2 series.

Photos surfaced over the weekend of him posing with various dead carcasses, guns rested against the corpses, supposedly to promote his hunting business.

Tactless: Love Island participant Ollie Williams’ Twitter account caused fury when it claimed the 23-year-old has ‘better legs than a gazelle’, a day after it was revealed Ollie has taken part in big game hunting

Following the publication of these pictures, Ollie’s Twitter account – run currently by his friends – re-tweeted a GIF of him leaning against the villa breakfast bar in swim-shorts, with the caption ‘Alexa, play Hips Don’t Lie by Shakira’, as Ollie swung back and forth.

Ollie’s Twitter then captioned the re-tweet ‘Better legs than a gazelle’.

Many saw this as disrespectful, given the revelations that Ollie hunts big game.

Reactions to this tweet began appearing. One person tweeted: ‘How would the gazelle feel if she was hunted?’

Another, referring to Ollie being filmed from afar, posted: ‘The view through the gazelle’s rifle scope…’ 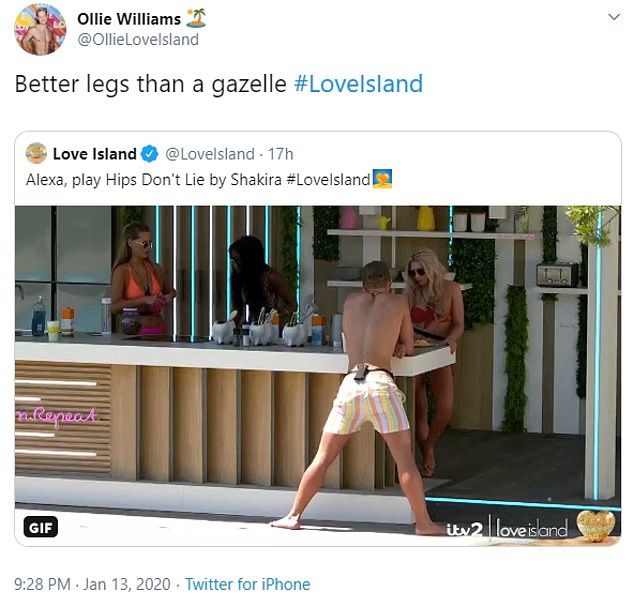 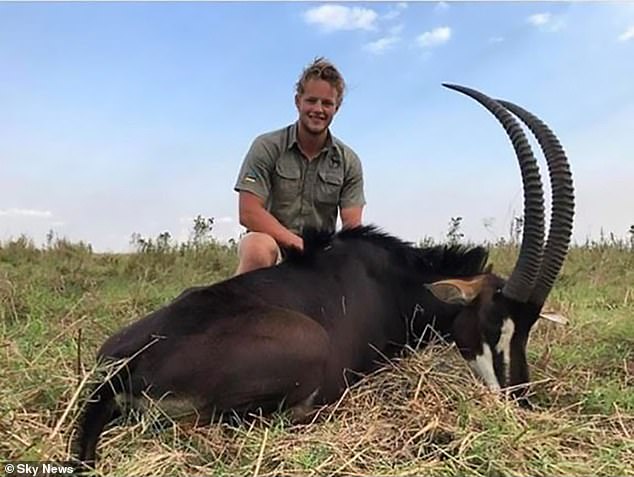 Inappropriate: Many saw this as disrespectful, given the revelations that Ollie hunts similar animals 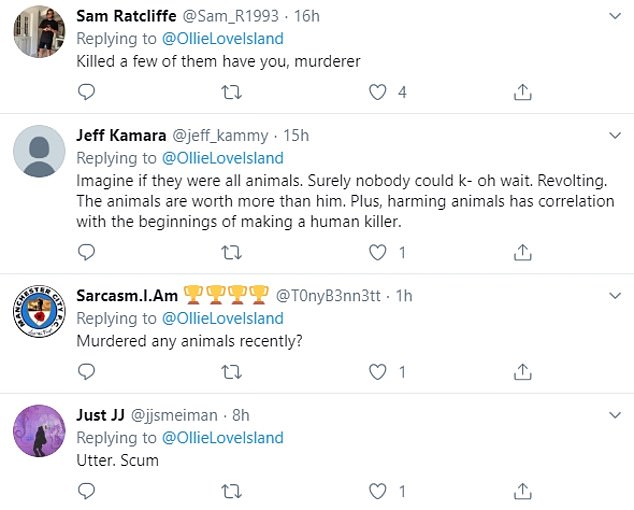 Someone else posted: ‘Killed a few of them have you, murderer.’

A fourth posted, ‘Revolting. The animals are worth more than him,’ as a fifth added: ‘Murdered any animals recently?’

Ollie has cited unrelated reasons for quitting the show, however.

In a scene believed to be aired on Tuesday night’s show, he said in the Beach Hut: ‘I have to be honest with myself, and everyone, that I do still love someone else… I have to follow my heart in this scenario and it would be wrong for me to ignore these feelings.

‘At the end of the day, this is Love Island and it’s about finding love. If I carried on anything with [current partner] Paige [Turley], or any other girl that might come into the villa, it wouldn’t be fair on them.’

A rep for Love Island simply told MailOnline: ‘Ollie has made the decision to leave the Love Island villa.’

Love Island bosses previously told MailOnline that they have ‘no intention’ of axing Ollie, with a further source saying producers of the ITV2 series refuse to ‘bow down to the public on a moral issue’ as they don’t believe keeping Ollie on the show will affect viewing figures.

An insider told MailOnline: ‘It is highly unlikely Ollie will be booted off the series. He’s part of the lineup and already filmed the first episode – bosses see no reason to kick him off.’

The source continued: ‘Love Island cast Ollie out of thousands of applicants and are sticking to their decision.

‘They’re hoping this will all blow over once the audience gets to know Ollie after seeing him on screen.’ 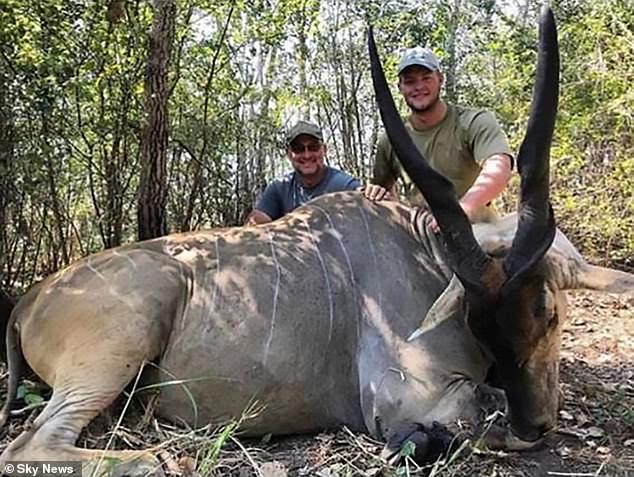 Denial: Sources close to the contestant previously denied any suggestion that he has hunted for sport after pictures emerged of Ollie posing alongside a variety of dead animals 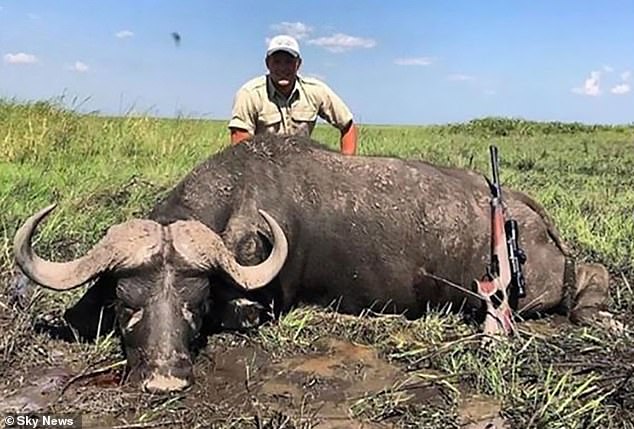 Controversy: Love Island viewers have been in uproar after photos of the heir to the 2,000-acre Lanhydrock estate in Cornwall emerged of him proudly posing beside a warthog, water buffalo and giant eland to promote his hunting business 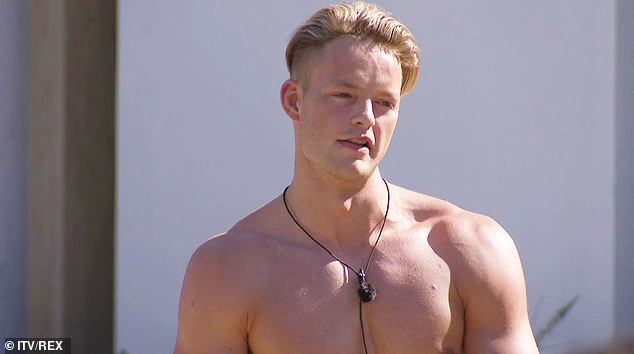 Outrage: Fans of the show were left outraged because of the inclusion of big game hunter Ollie Williams, 23, in the line up 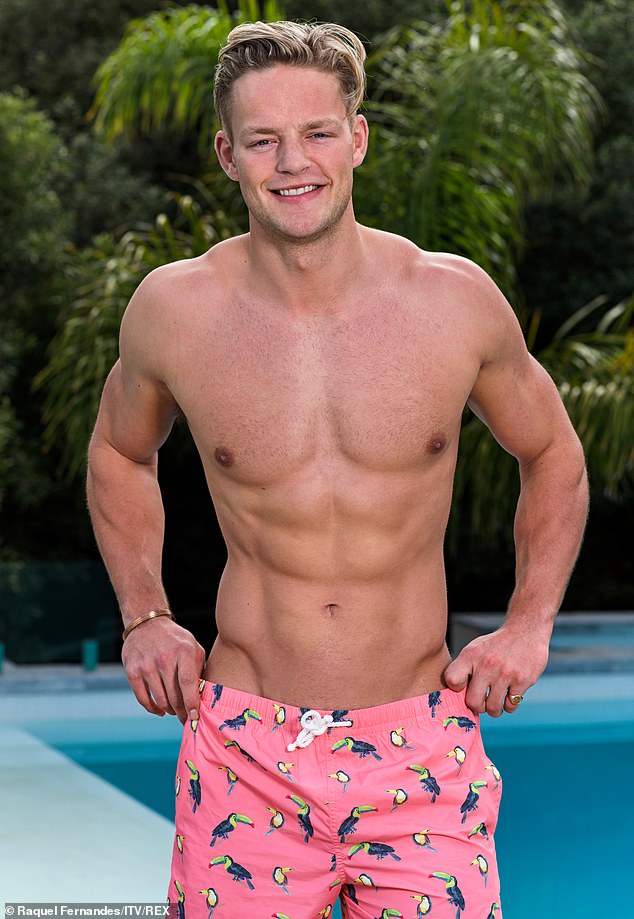 Staying put: Love Island bosses have previously said they have ‘no intention’ of axing Ollie Williams after he was exposed as a ‘big game hunter’