The Love Island hideaway is officially open for 2022, with Tasha Ghouri and Andrew Le Page the first couple picked to enjoy a private night together.

In scenes that will air on Tuesday night’s episode the couple get hot and heavy in the boudoir as they are treated to a night without the interference of their fellow Islanders.

Cuddling up for a night of passion, talk soon turns to the couples’ fantasies, before the pair throw themselves onto the rose petal strewn sheets for a make out session.

Steamy: The Love Island hideaway is officially open for 2022, with Tasha Ghouri and Andrew Le Page the first couple able to enjoy a private night together

Ahead of their night of passion, Tasha said in the Beach Hut: ‘Today I’ve seen such a different side to Andrew, he’s just being so much more spicy, he’s being flirty, I don’t know, something in him is giving me more oomph, this is what I’ve been waiting for, this sexy Andrew!’

The Islanders were then invited to select one lucky couple to sleep in the Hideaway. and they chose Andrew and Tasha as the first pair of the series to visit the Villa’s famous love nest.

But as the pair head to the Hideaway for some alone time, will their relationship continue going from strength to strength? 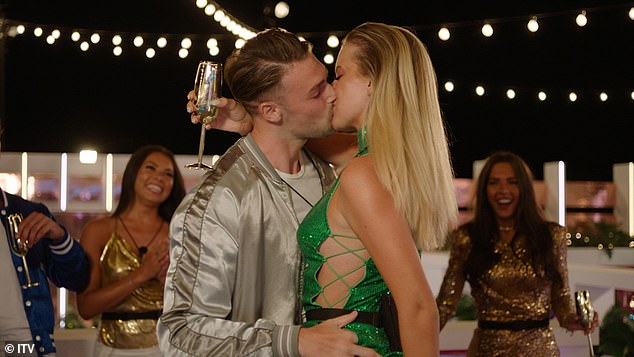 Racy: In scenes that will air on Tuesday night’s episode the couple get hot and heavy in the boudoir as they are treated to a night without the interference of their fellow Islanders

Elsewhere in the episode, after Afia Tonkmor became the first Islander to be dumped from the villa, the remaining stars are left bereft.

Luca Bisha attempts to console Gemma Owens with a hug, yet when the couple embraced, Gemma accidentally suffered a slip of the tongue and called Luca by ex Jacques O’Neill’s name.

Jacques is sitting directly next to them and the other Islanders are quick to comment on the situation.

Amber laughs: ‘Did you just call him something else?’

Luca says: ‘I know what she said.’

Having just coupled up with Jacques, Paige says: ‘Easy mistake to make, hun.’

Not long after Luca leaves the kitchen and walks off into the garden, Gemma asks the other Islanders: ‘That was bad wasn’t it?’

Paige answers: ‘That was bad, I am not gonna lie, he was stood there, you had your guy rubbing your shoulders, he’s stood there and you’re like… ‘Oh Jacques.’

Gemma pulls Luca for a chat to discuss what just happened. Will Luca be able to forgive and forget?

The boys buckle up for today’s car-themed challenge ‘Men-Chanics’ as they are put through their paces carrying their partners whilst they jump through oily tyres, while being sprayed with water by the other boys.

Wearing tight, sparkly briefs the boys then head to the carwash where they must perform a sexy dance for their partner sitting in the front seat.

But which mechanic will provide the best service and be crowned winner by the girls?

Having completed today’s challenge the Islanders are awarded a ‘Shimmer and Shine’ party in partnership with eBay. Decked out in their pre-loved finest, the Islanders head into the garden for the party.

As they soak up their surroundings, what they don’t realise is the party is about to be gatecrashed by two new bombshells – Remi and Jay.

So what impact will the arrival of Remi and Jay have on the Villa and the rest of the girls as the night continues?