The brother of Love Island star Megan Barton-Hanson has been spared jail after smashing up a hotel before being chased by police on a naked drug-fuelled rampage.

Kurtis Barton-Hanson shot holes in the wall of his room with a BB gun before smashing up cups and saucers and answering the door to housekeepers nude.

The 23-year-old was high on ketamine and cocaine when he smashed up the Fownes Hotel in Worcester between November 3-5 last year, a court heard.

In a separate incident he also admitted slashing a police car’s tyres with a knife and forced his way into a woman’s car and sexually assaulting her.

Barton-Hanson’s sister Megan, 25, came fourth place with her partner Wes Nelson on series four of Love Island in 2018. She is also set to star on the next series of Celebs Go Dating.

Barton-Hanson and his father appeared on the show as they paid a visit to Megan while she was still in Mallorcan villa.

He went on his rampage just four months later.

He was sentenced to six months in prison, suspended for two years, 150 hours unpaid work and ordered to pay £535 costs on Wednesday.

Barton-Hanson was also banned from driving for 12 months and ordered to complete a Thinking Skills programme. 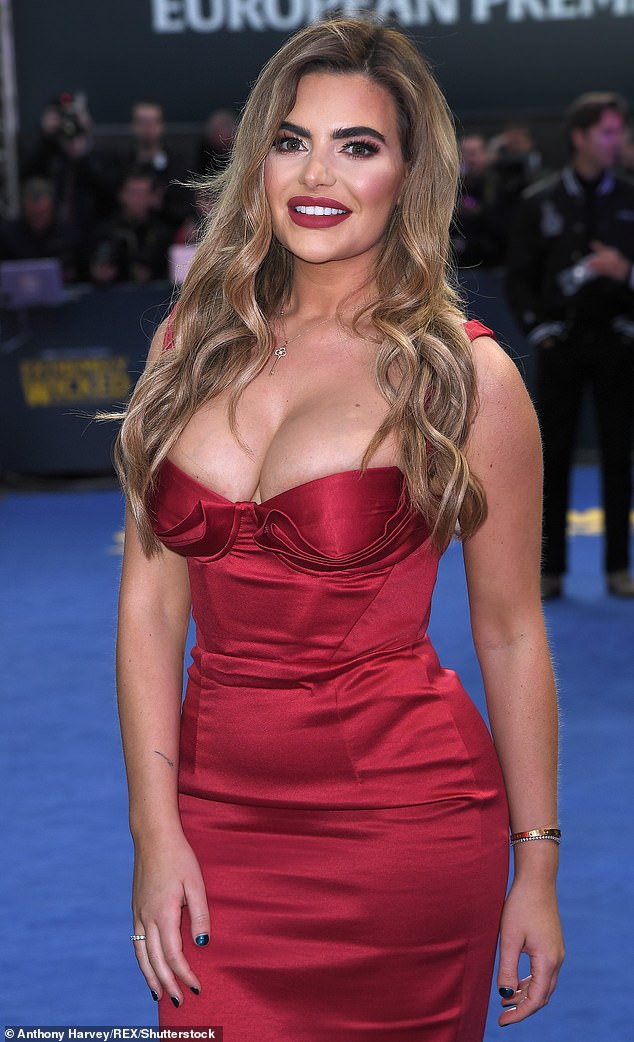 Barton-Hanson is the brother of Love Island and Celebs Go Dating star Megan, 25 (pictured in April)

She said: ‘There were reports that Barton-Hanson was acting oddly at the Fownes Hotel including answering the door naked to housekeeping.

‘He asked for a replacement kettle and cups, telling staff he had smashed them, and there was a strong smell of cannabis coming from his room.

Barton-Hanson visited his sister Megan, 25 (pictured in July), when she was on Love Island in 2018

‘He had a BB gun in reception and police were called, finding his room in a complete mess, the defendant having created targets on the walls out of tape.

‘The walls for some reason were covered in tape and there were pellet holes where he had been shooting the wall.’

Armed officers were deployed to look for him at 8.40am on November 5 last year, before finding him in Worcester.

He drove up to them, getting out of the car with his hands up and volunteered that he had more of the Airsoft weapons and a knife in the car.

He tested positive for cocaine and ketamine and a closed lock knife was found in a box within a box in the car.

Officers also found 60g of cannabis and 1g of cocaine.

The court heard Barton-Hanson suffered a ‘complete breakdown’ and had told his mother he wanted to change his name to ‘Gold’ and spray himself the same colour.

Judge Nicolas Cartwright said: ‘The defendant went off the rails for a period and the offences could be looked at in a rather more sympathetic way.

‘It’s clear you had had a complete breakdown as a result of life events outside your immediate control which resulted in you behaving in a very odd and sometimes criminal way, including walking around in the Fownes Hotel naked.’

The damage was placed at £100 although the Hanson-Barton had since returned to the hotel and paid them £600 compensation.

Robert Tolhurst, defending, said: ‘This was not an ordinary case. The offences happening over a narrow period following what he considers to be a betrayal by his long term girlfriend and the death of her mother to whom he was close and whose funeral he was prevented from attending.

‘He is an entrepreneurial young man who was behaving out of character.’

The court heard he slashed a police car tyre with a Stanley knife before getting into her car at a petrol station and touching her leg.

He will be sentenced for this offence on July 30.