Low paid workers getting £12-a-day to watch the sprawling £5.3m mansion say they are not allowed to go near the reality TV stars or hosts Laura Whitmore and Iain Stirling while they film the hit ITV2 show – because bosses fear they’ll steal from them.

Gardeners and security staff working close to the villa in one of Cape Town’s wealthiest districts say they have been shunted aside and are under strict orders to only speak when they are spoken to by the filming crew.

The Love Island villa (pictured) is being rented out to ITV for a reported £103,000-a-month until the show finishes in February 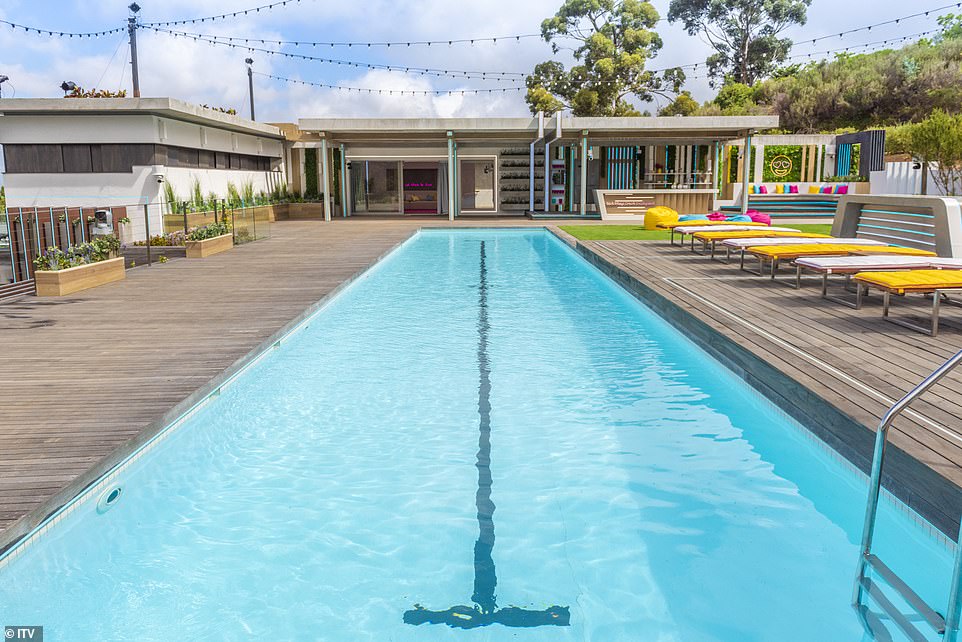 The sprawling villa (pictured) where the Love Island stars hang out by the pool is located in Belair Road, Cape Town, which is in one of the city’s most exclusive streets nicknamed by locals as ‘Millionaire’s Row’ 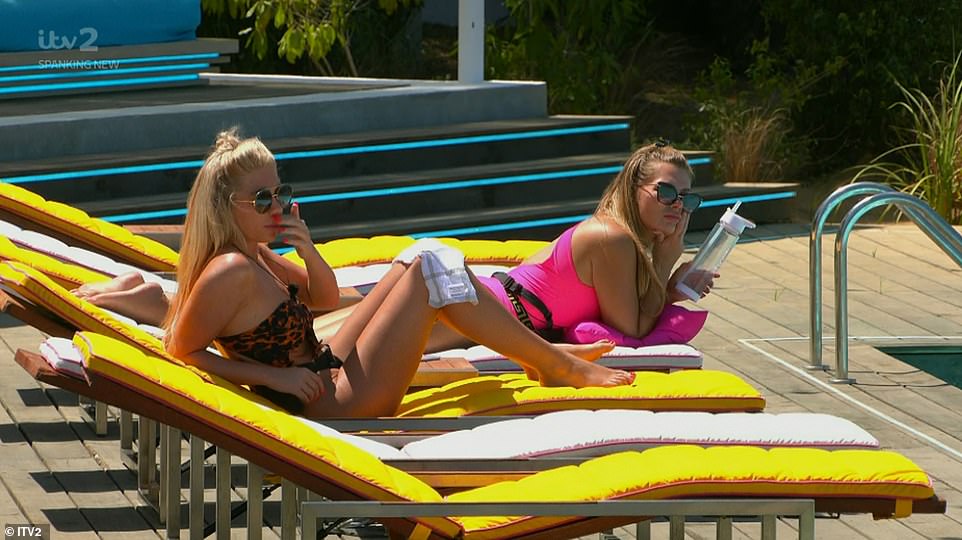 The mansion, which is currently being marketed by the owner – an Italian diamond tycoon – for £5.3m, boasts no fewer than three swimming pools, six bedroom, seven bathrooms, its own cinema, a library, gym and is set in 3.5 acres of grounds 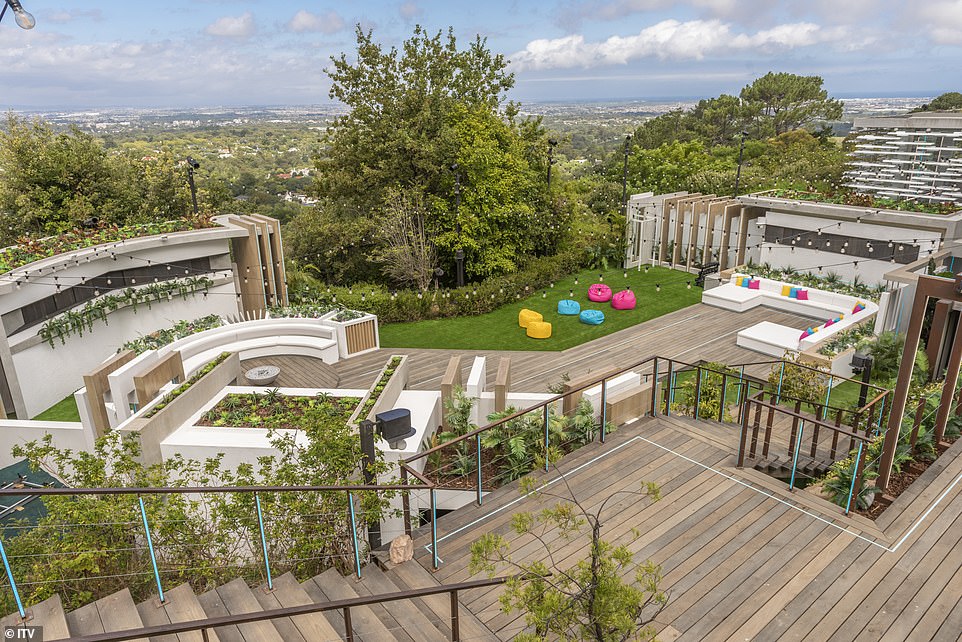 The 20,000 sq ft villa (pictured) with stunning views of Cape Town was bought by businessman Luca Bechis for £2.65m in 2010. His family moved out in 2018 and he now rents it out. Netflix’s Black Mirror, staring Miley Cyrus, was also filmed there 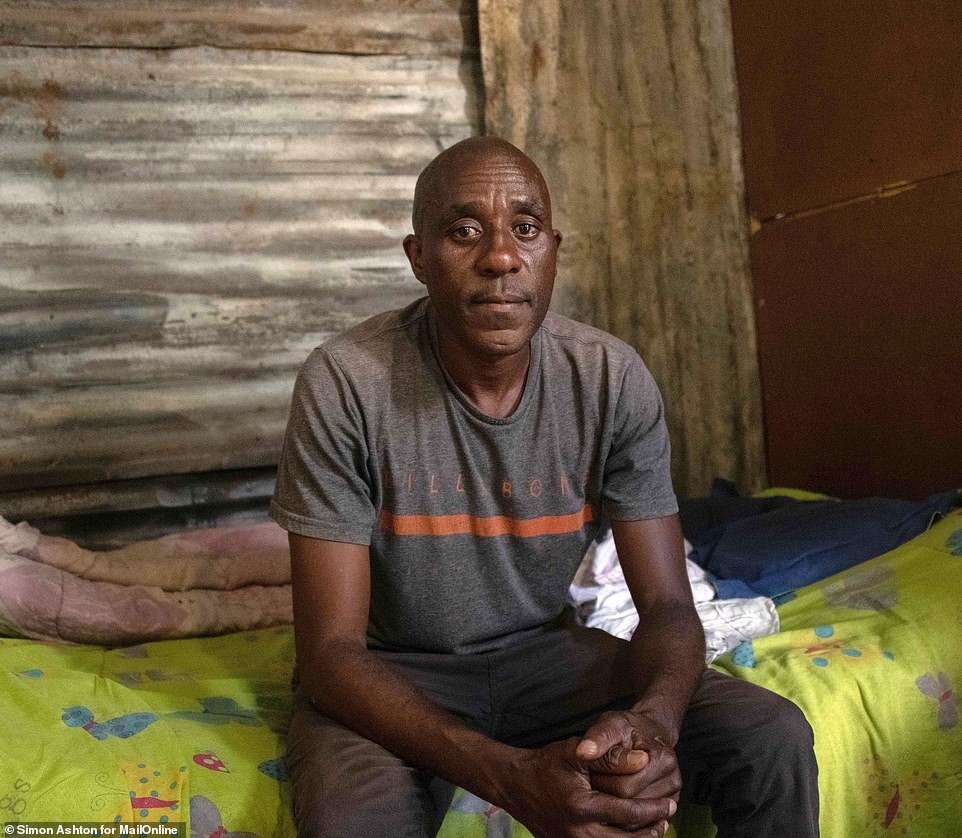 Security guard Sivuyile sits in his shack in Mandela Park where he lives seven miles up the road from the villa. The father-of three is paid £12-a-day for a 12 hour shift to guard land behind the Love Island villa where production staff are based 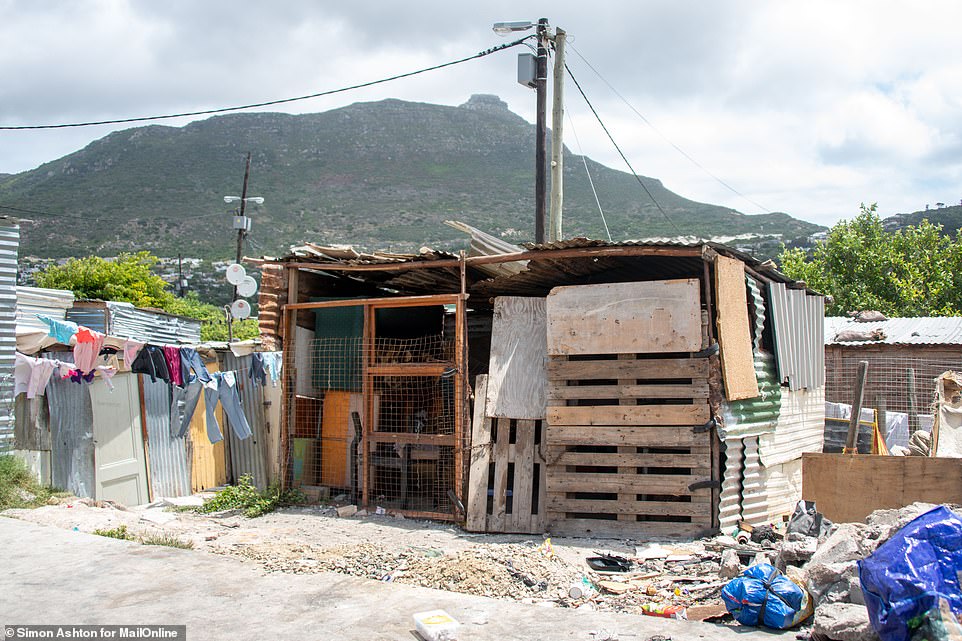 Many of the low-skilled workers operating in and around Belair Road live in Mandela Park also known as Imizamo Yethu – or ‘Our Efforts’ – a makeshift shanty town in Hout Bay covering 18 hectares and home to around 34,000 people 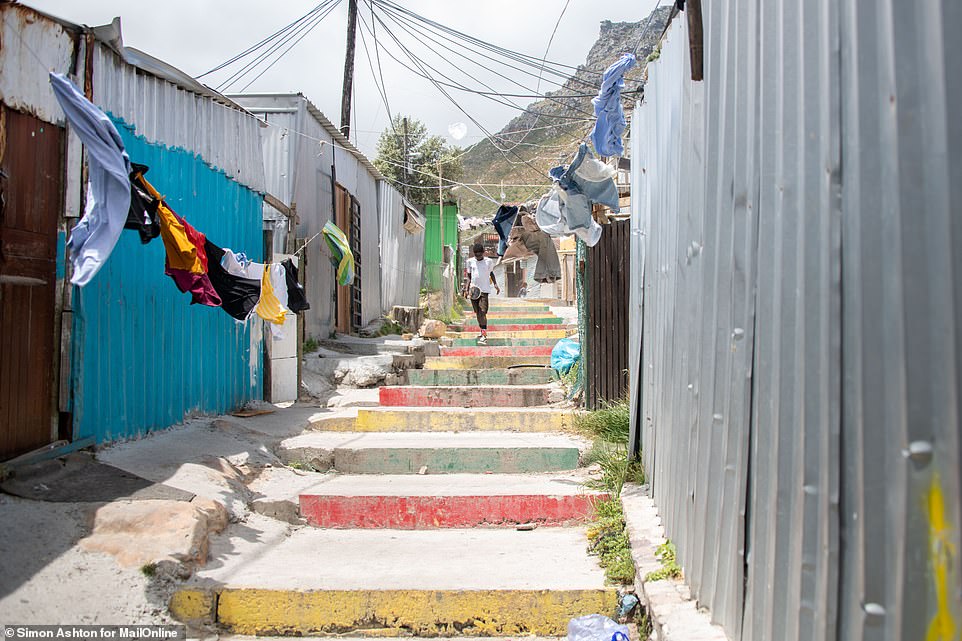 Inside the oppressive settlement, water taps are used by 100 people and on average 20 households share an outside toilet 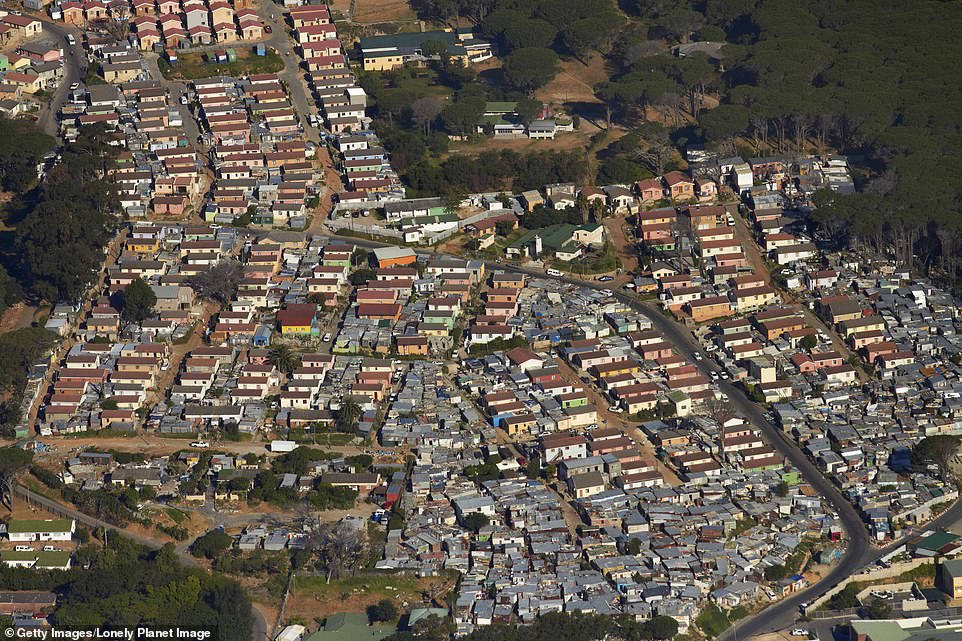 ‘We know they are filming in the house but the boss won’t let us go near the Love Island housemates. We aren’t allowed anywhere near them, gardener Tembela, 43, told MailOnline.

‘Black workers aren’t allowed to go near to the guests. They fear we will steal from them.

‘It’s like when any wealthy tourists come into the area – we’re only allowed to speak if we are spoken to… and we must be polite,’ the gardener added. 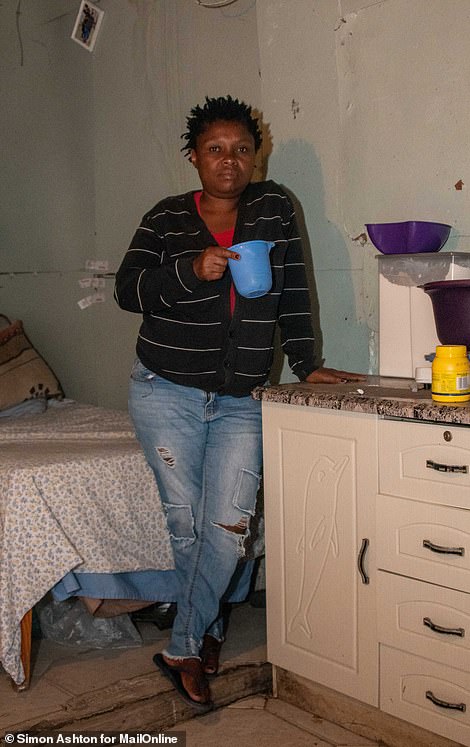 Tembela, 43, pictured in her shack in Mandela Park, works on the Eagles’ Nest Vineyard neighbouring the Love Island villa

The six-bedroom Love Island villa set in three and a half acres of land Mountain is called Midden Cottage and is located in Belair Road – nicknamed ‘Millionaires Row’ – a collection of 32 of the finest mansions in Cape Town in the shadow of Table Mountain.

The 20,000 sq ft villa with seven bathrooms and three swimming pools was bought by Italian businessman Luca Bechis for £2.65m in 2010.

The married father-of-three was a founding partner of London-based investment firm Richmond Capital LLP before quitting the City in 2012.

The businessman and his family are now based in Cape Town, although he is now head of Richmond Environmental Charitable Foundation with mining and agricultural interests in Uganda, Kenya and Mozambique.

The family moved out of the family home, complete with its own library and gym, in 2018 and rented to the makers of Netflix’s Black Mirror, staring Miley Cyrus.

Mr Bechis has put the property on the market and is believed to be leasing it to ITV2 for £103,000-a-month until it finishes in February.

The plush surroundings of Belair Road, next door to the renowned winemakers at the Eagles’ Next Vineyard, is as close to luxury as some of the low-paid workers tending to the manicured lawns or keeping the mansions secure will get.

Security guard Sivuyile Mponde is part of a 30-man armed team patrolling a plot of land behind the Love Island villa where the show’s production staff are based in Portakabins during filming.

He spends every day guarding the entrance to the Eagles’ Nest winery estate where blacked out vehicles carrying show staff whizz up and down an access road there to reach the villa. 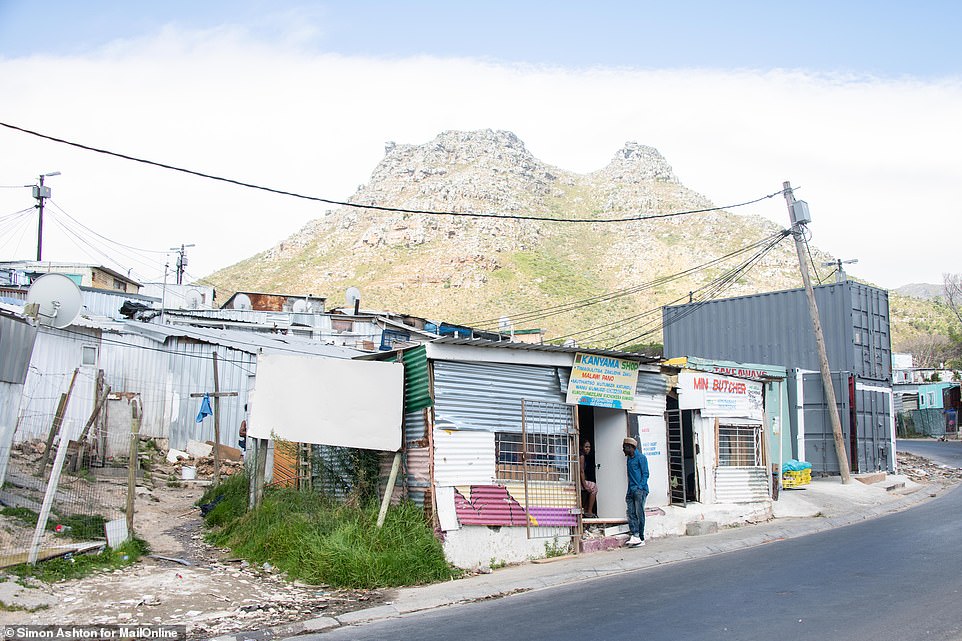 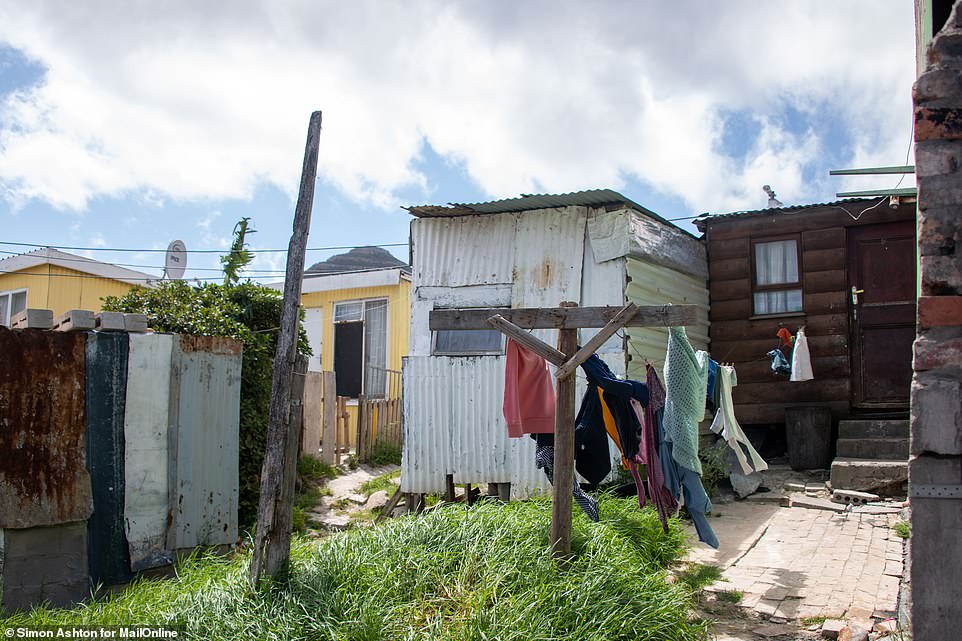 With makeshift houses erected just inches from one another the homes are vulnerable to fire. Two years ago three people died and 3,500 were made homeless when a devastating blaze tore through Mandela Park 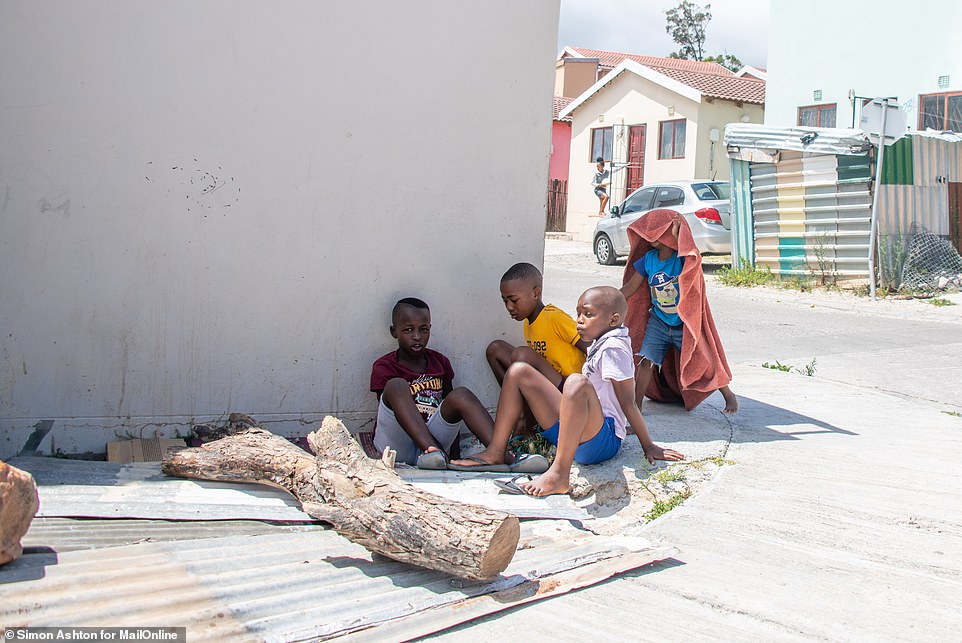 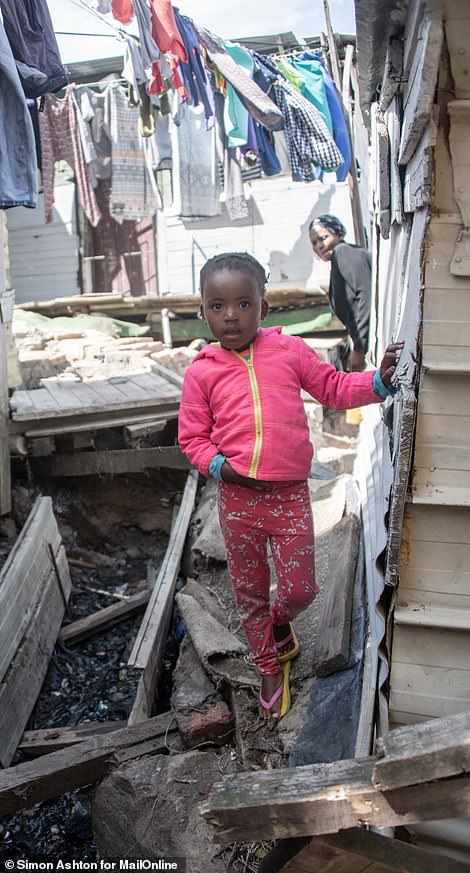 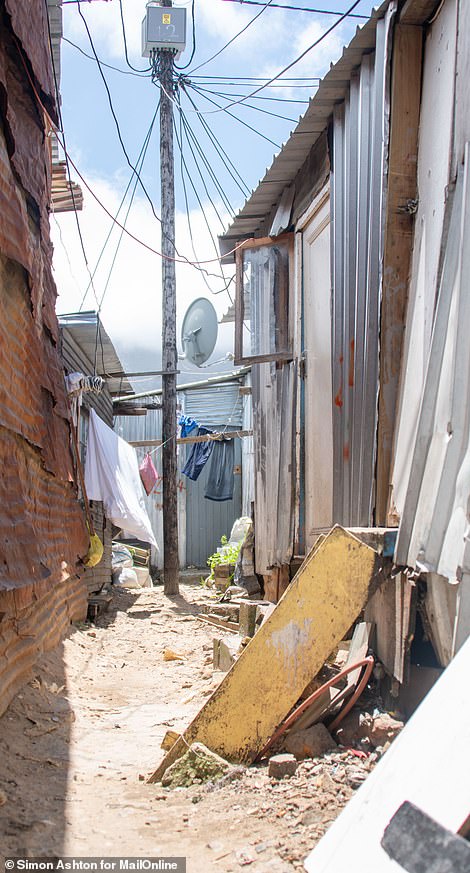 A little girl walks through the corrugated iron, planks of wood and debris in the settlement where crime is so high that police are too frightened to go beyond the boundary and residents often pay local gangsters and crime rackets to keep them safe 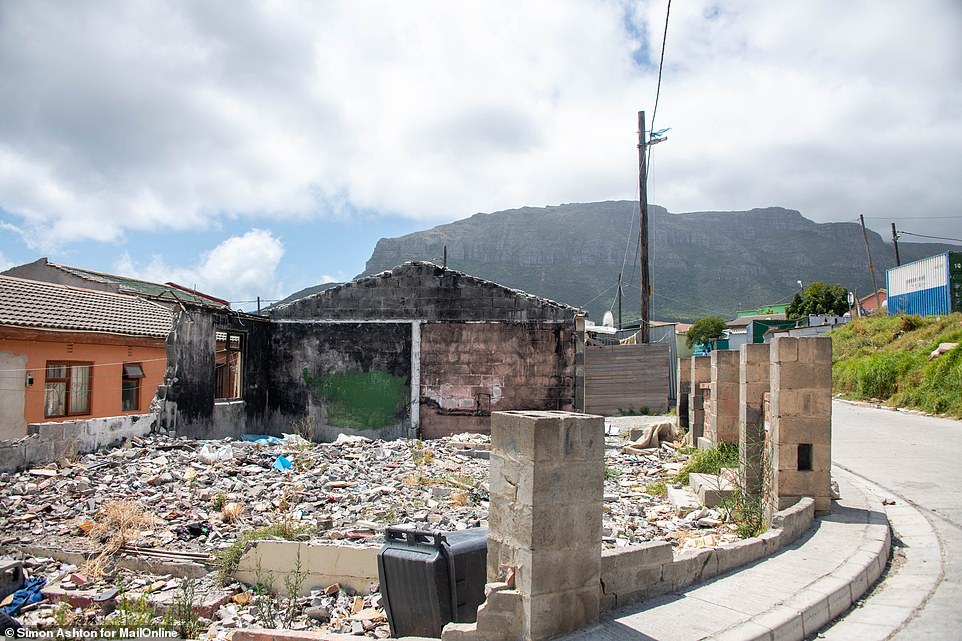 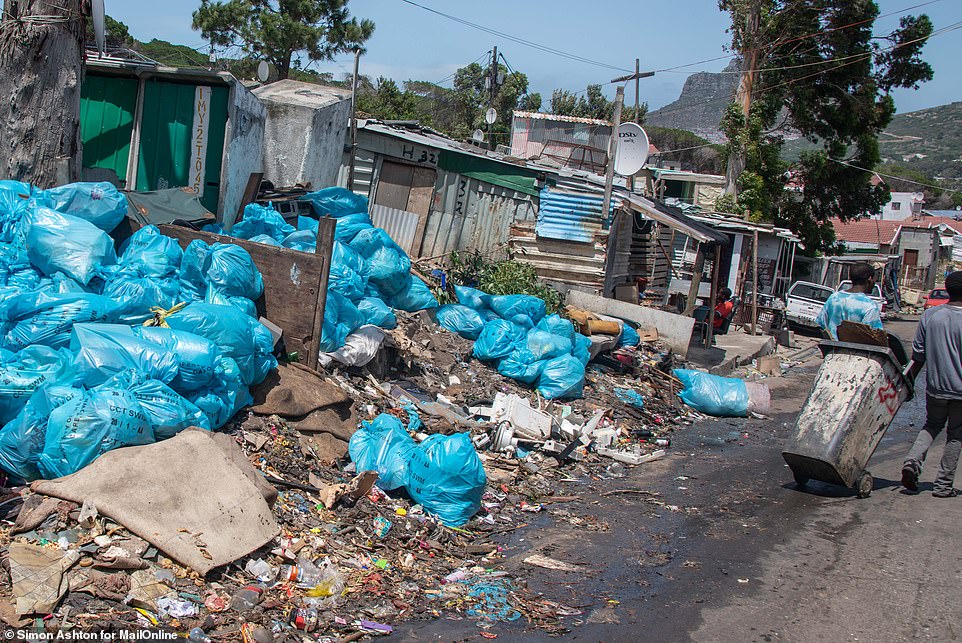 Rubbish bags are piled high in the settlement which has raw sewage running through its narrow streets where 20 households all share a communal toilet. Residents complain that there is an issue with rats carrying disease living there 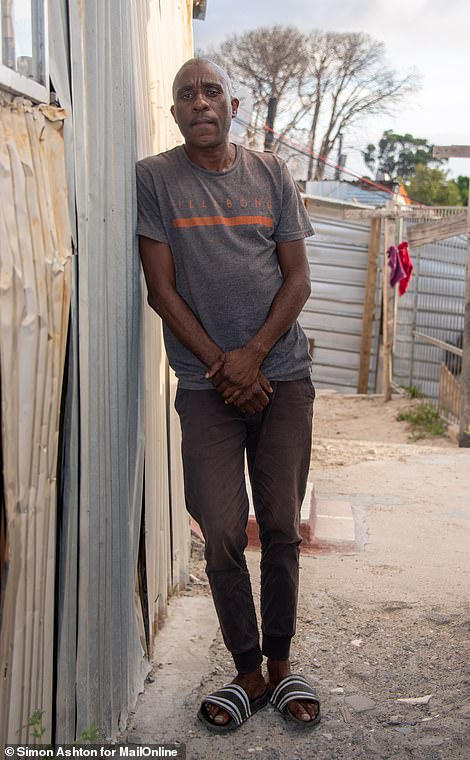 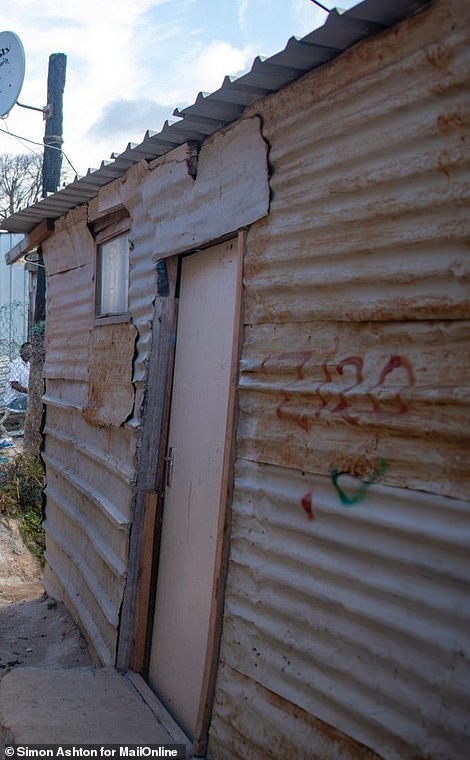 Sivuyile (left) shares his shack (right) made from corrugated iron with one of his three sons. His wife and two other children live on the Eastern Cape whom he sends money back to and hopes to visit them for two weeks next month

Sivuyile, 43, says his meagre wages mean he lives in a shack with one of his three sons on the crime-ridden Mandela Park township, which is only seven miles down the road – but in reality a world away from the glistening Love Island mansion.

Speaking to MailOnline, the father-of-three said: ‘It’s my job to keep the estate safe from intruders.

‘I patrol the grounds here and keep residents secure.

‘In South Africa, obviously there is a high risk of kidnap and robbery. The Love Island stars are staying in one of Cape Town’s most attractive suburbs.

‘People living in these areas become a target for would-be robbers and so I stop that happening.

‘We make sure the guests arrive and leave safely. And we have security camera and shotguns to make sure that happens.’

Sivuyile pointed out that he is risking his life to protect the stars which generate millions of pounds for ITV, but his salary of £238 per month – which, he acknowledges, is the minimum wage in South Africa – isn’t enough. He suggests that his bosses at security contractor PPE should provide him with secure housing.

Instead after every 12-hour shift he gets the bus or hitches a ride back to the grim surroundings of Mandela Park – also known as Imizamo Yethu – or ‘Our Efforts’ – a makeshift shanty town in Hout Bay covering 18 hectares and home to around 34,000 people.

Inside the oppressive settlement, water taps are used by 100 people and on average 20 households share an outside toilet.

The Disa River which runs through this settlement has the highest level of e-coli bacteria that has ever been recorded in the country.

With makeshift houses erected just inches from one another, homes like Sivuyile’s are vulnerable to fire. Two years ago three people died and 3,500 were made homeless when a devastating fire tore through Mandela Park. 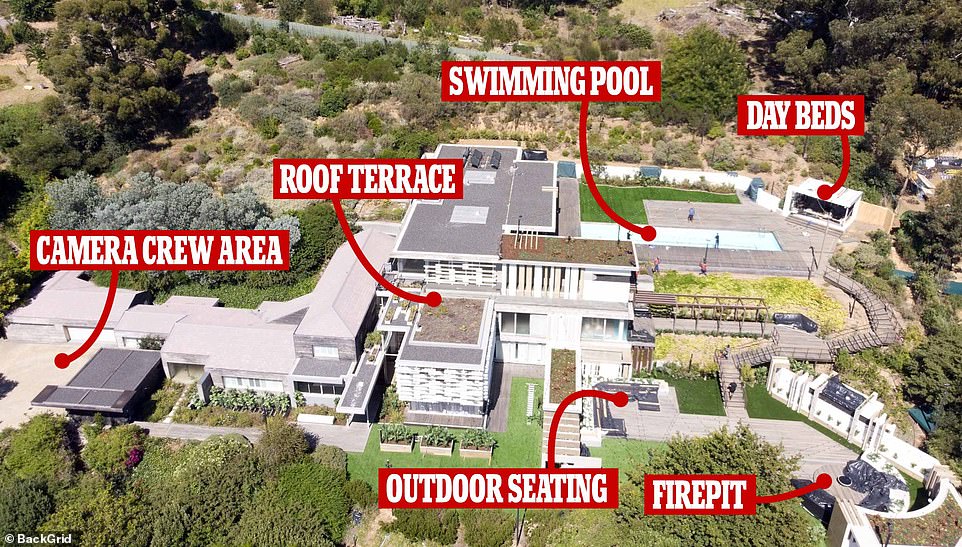 An aerial view shows how Madden Cottage is set out with the swimming pool, roof terrace and firepit area all used in filming 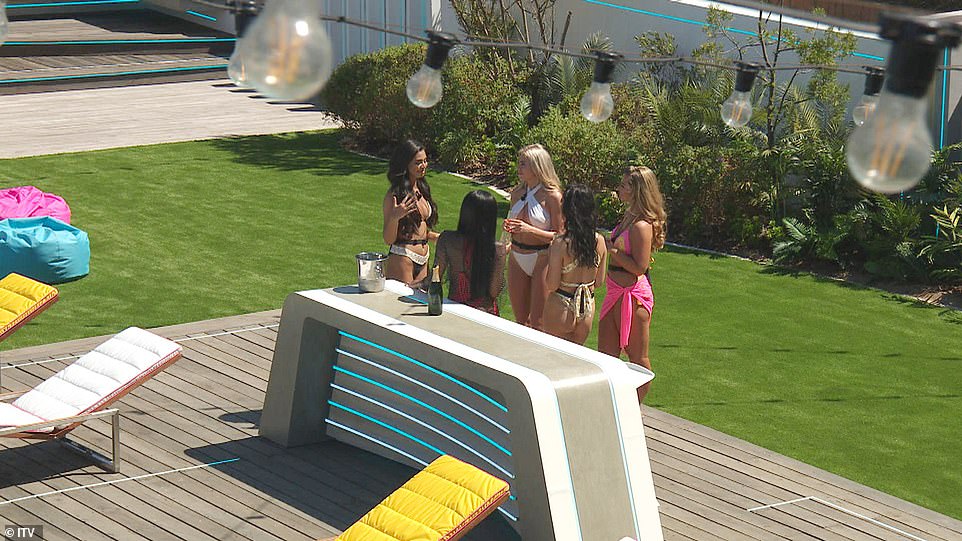 Sivuyile says the glitzy Love Island villa – where contestants Sophie, Leanne, Paige, Sinnise and Shaughna met for the first time earlier this month – will make no difference to his life, which will be the same when they have packed up and gone home 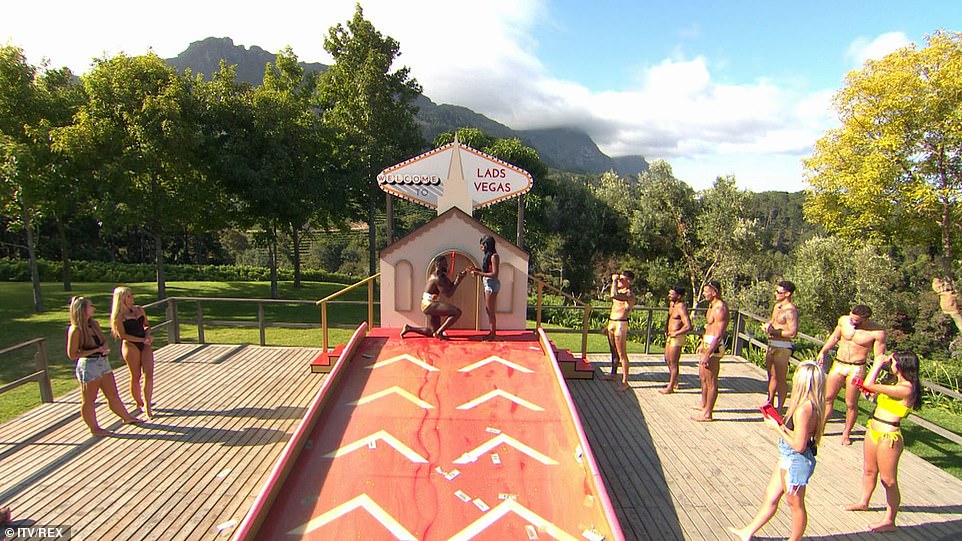 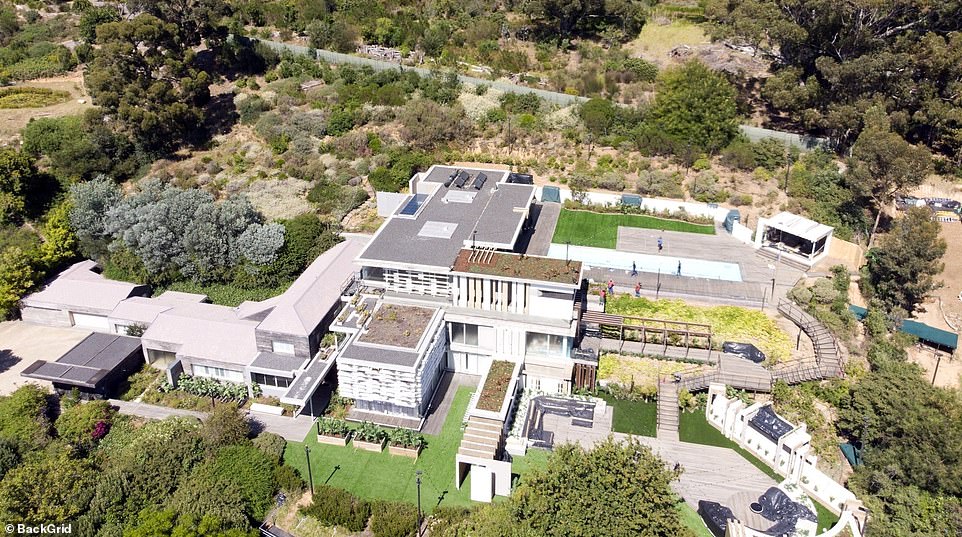 Sivuyile said people there are still coming to terms with what happened and that crime is rife as police are too frightened to go beyond the boundary and instead residents often pay local gangsters and crime rackets to keep them safe.

Despite Belair Road’s opulent mansions and Eagles’ Nest Vineyard providing some jobs for Mandela Park’s hard-up residents, Sivuyile says the reality show will not leave any positive, long-lasting legacy on the surrounding area.

Long after the bikinis, fake tan, make-up, washboard stomachs and egos have packed up and gone home for another year, the married security guard says he will still be saving up enough money to visit his wife and two of his children back home on the Eastern Cape. 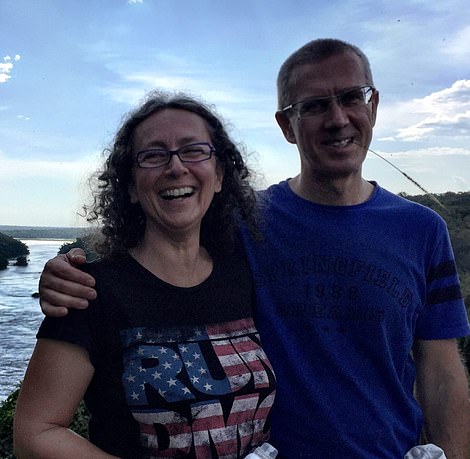 Italian Mr Bechis pictured on holiday with his wife and mother of his three children. He now runs a gem foundation

‘Love Island will make no difference to my life,’ shrugged Sivuyile. ‘I was paid £12-an-hour before Love Island arrived and I will be paid the same long after it has gone.

‘I will still live here in Mandela Park, barely making enough money to survive. My home will still be uncomfortable and unsafe.’

Sivuyile left his home in the Eastern Cape to find work in Cape Town four years ago.

Like tens of thousands of low-skilled workers he lives away from home for months at a time to earn money to send home.

He hopes to go back and visit his wife and two other sons for two weeks in February.

‘Love Island might make the TV company a lot of money… but I won’t get a pay rise so it won’t change my life for the better at all,’ he added.

Sivuyile’s bosses at PPE Security insist that their staff are paid fairly.

South Africa set its first-ever national minimum wage in January 2019 at ZAR 20 per hour, £1 per hour.

However, agricultural workers continue to be paid 95 pence-an-hour and domestic workers 80 pence, with the increase phased in gradually.

Mr Bechis, the owner, declined to comment on his financial agreement with ITV over the villa’s lease agreement. 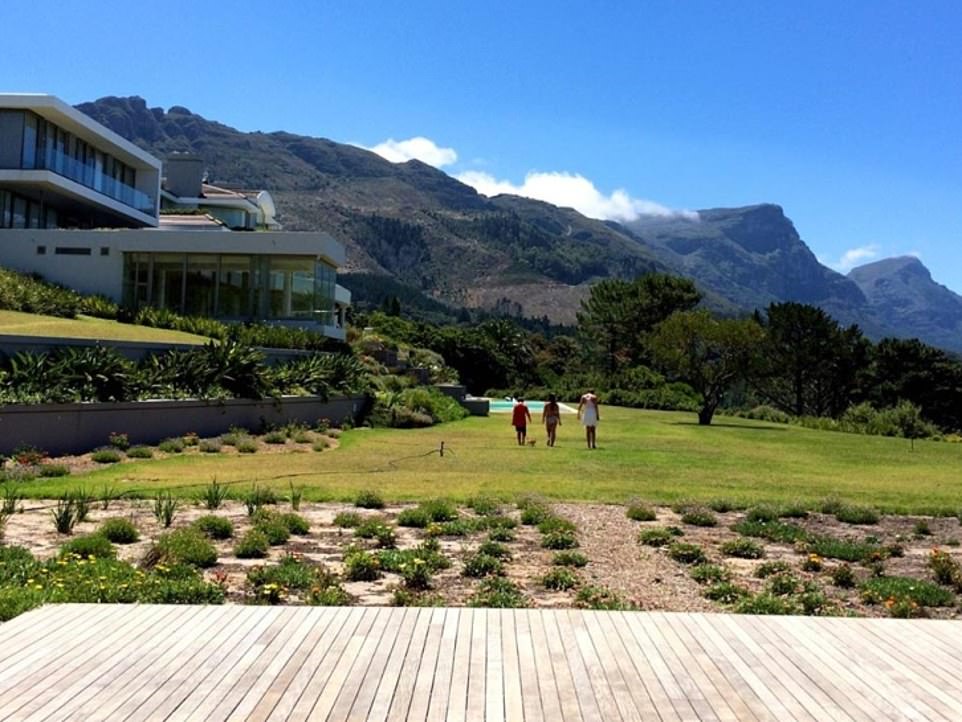 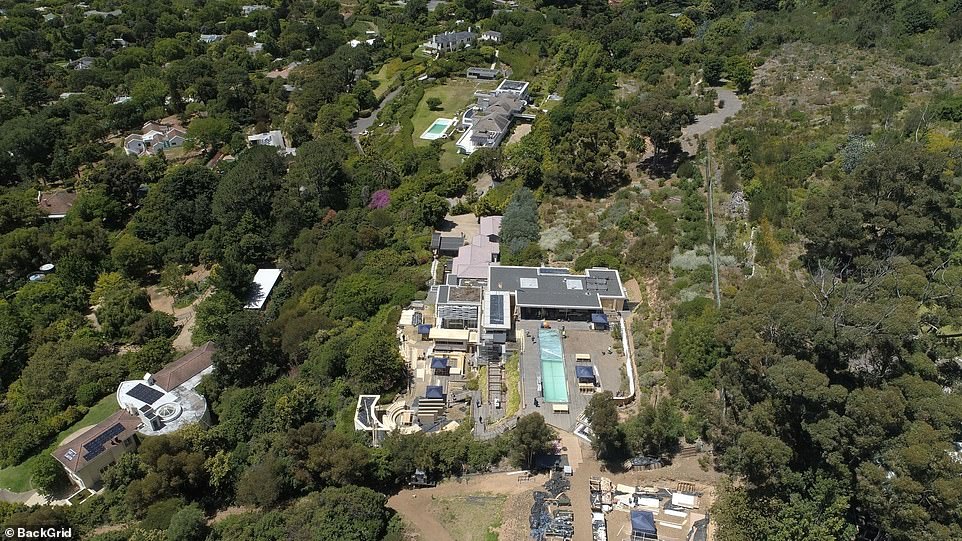 Sivuyile says he is part of a team of security guards based at the entrance to the Eagles’ Nest Vineyard, which neighbours the villa and patrols an access road behind the property used by production staff to reach Portakabins behind the mansion 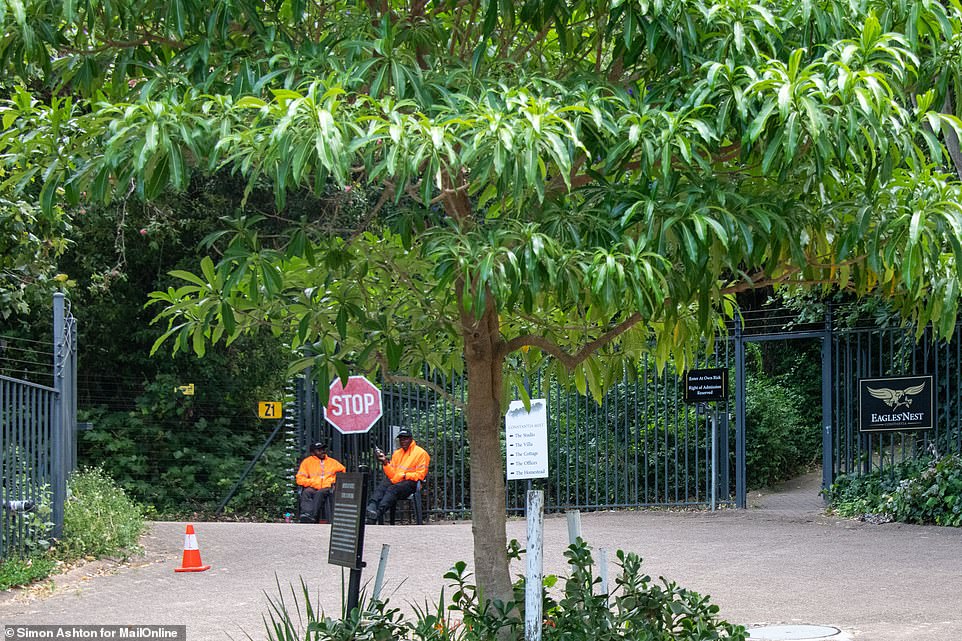