Love Island star Chris Hughes will lose more than half a stone in just one month as he steps up training for his first charity horse race in June.

Thanks to expert advice on his diet and exercise regime, the 25 year-old – who grew up riding horses – is confident he can shed the pounds in weeks.

His six-pack may suggest there are no extra pounds to lose from his toned body, but getting into race-winning jockey shape is a different type of fitness, Hughes tells Mail Online.

The reality star had a muscular and chiselled upper body to look good for BAFTA-winning show Love Island on which he rose to fame, but horse racing requires him to be leaner and to focus on his endurance and leg and core strength.

The expert who is drawing up his diet plan says he would give the same advice to anyone wanting to lose weight.

Hughes will run before breakfast each morning and eat six meals a day, focusing on foods which are low in calories such as fruit, vegetables and lean meats.

He will race in the Best Western Hotels & Macmillan Ride of their Lives charity race at York Racecourse on June 16, and is raising money for Macmillan Cancer Support. 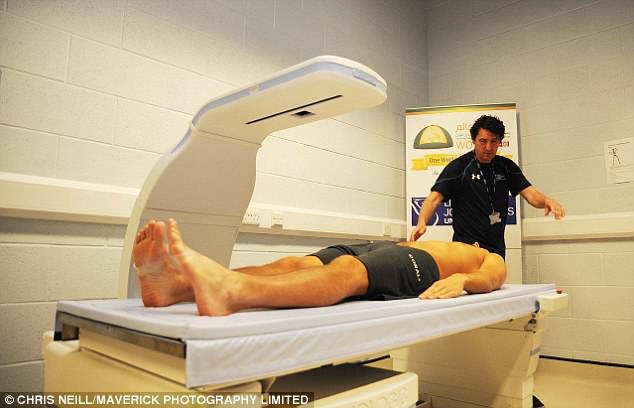 Hughes has been training since March with former jockey and Grand National-winning trainer Jonjo O’Neill.

He now trains on horses at least three times per week under the guidance of O’Neill and former jump jockey Dom Elsworth.

The key to Hughes losing his target of seven to eight pounds, says Dr George Wilson of Liverpool John Moores University, is running every morning and eating fewer calories than he uses.

Hughes, who is being sponsored by Coral for the event, met with Dr Wilson at the university on May 14 for an assessment.

Hughes’ fitness is ‘well above average’

Dr Wilson says making sure you have a calorie deficit every day and cutting down on processed foods are weight loss techniques which work for everyone.

He says Hughes’ fitness is ‘well above average’ – the reality star has played football for years, including for Kettering Town and Swindon Town – and he is being treated as if he were a professional jockey.

But, Hughes says, he will need to make changes to his on-the-go lifestyle. 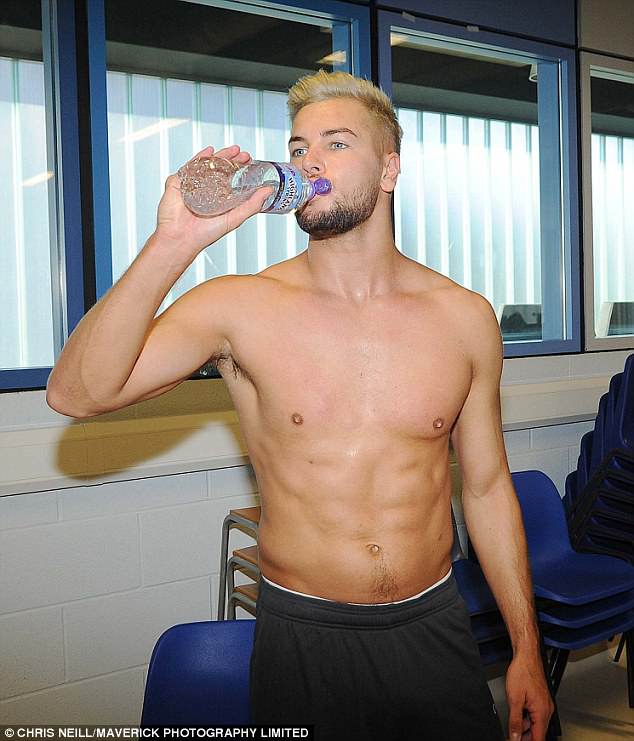 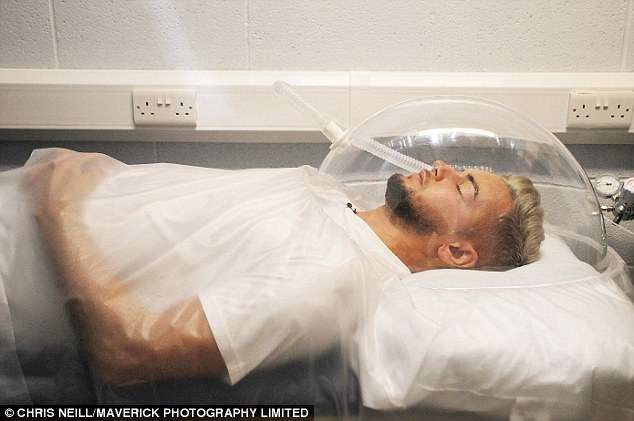 ‘I’m not healthy at all at the moment – I eat what I can when I can,’ he says. ‘I’m so busy I’m lucky to eat properly twice a day.

‘I just grab whatever I can when I’m on the go. I eat way too much fast food.’

Run before breakfast and burn more calories than you eat

Dr Wilson has measured Hughes’ body composition – to see how much fat he can afford to lose, his resting metabolic rate – to work out the bare minimum amount of calories he needs, and his VO2 max – to test his fitness.

He then told Hughes, who is 6’0 tall and weighed 12st5lbs, how to shed the pounds before race day.

Hughes will run every morning before he has breakfast and stick to a tailor-made diet plan based on low energy-dense foods, making sure he eats fewer calories than he will burn each day.

Dr Wilson has drawn up a diet plan for Chris Hughes which is based on six meals per day and focuses on large servings of foods which are low in calories and carbohydrates.

It is also crucial for Hughes to make sure he eats fewer calories than he is burning each day – he will consume approximately 2,000 calories per day and is expect to burn 2,500, leaving his body with a deficit of 500 calories. The same rule applies to everyone, Dr Wilson says, but the numbers of calories should be adjusted depending on a person’s size, gender, age and how active they are.

Here is an example day from Hughes’s plan:

Wake up: Run for 30 minutes at about 80% of maximum effort – the body burns fat more efficiently during fasted exercise before any food has been eaten.

Breakfast: Two egg omelette with peppers, onions, tomatoes and mushrooms, cooked in vegetable oil. A cup of green tea and a glass of water. (Approximately 400 calories)

Lunch: Bowl of vegetable or noodle soup, and tuna salad (salad should include lots of greens in the salad, which have all important vitamins and minerals and are high in nitrates which help prevent fatigue). Green tea and water. (Approx. 400 calories)

CALORIES: Total calorie intake is approximately 2,000 Calories, whereas Hughes is expected to use 2,500 calories during normal living, exercising and riding. This leaves the body 500 calories short, and it will have to burn fat for energy to replace that. 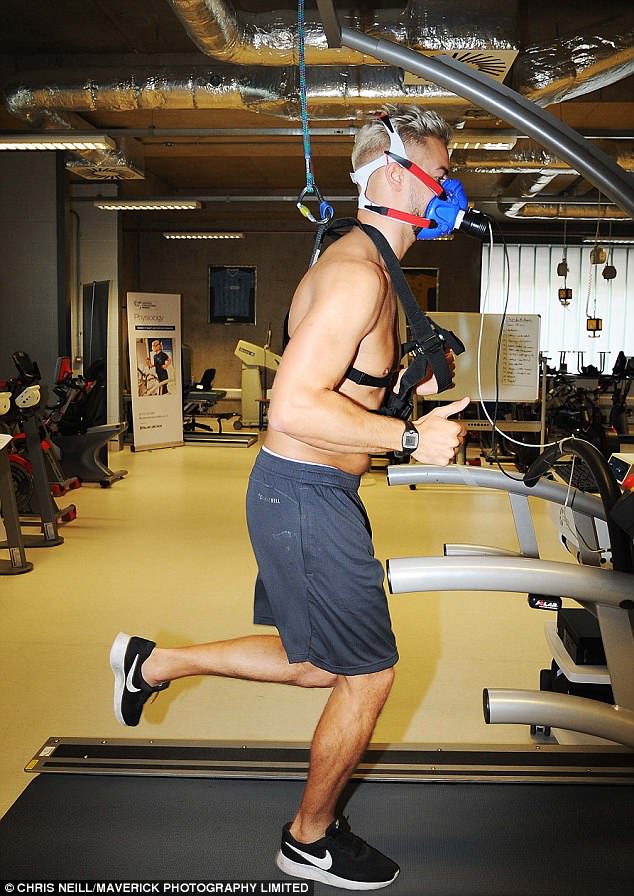 Hughes will run every morning before breakfast, which is when the body is most efficient at burning fat instead of food sugars 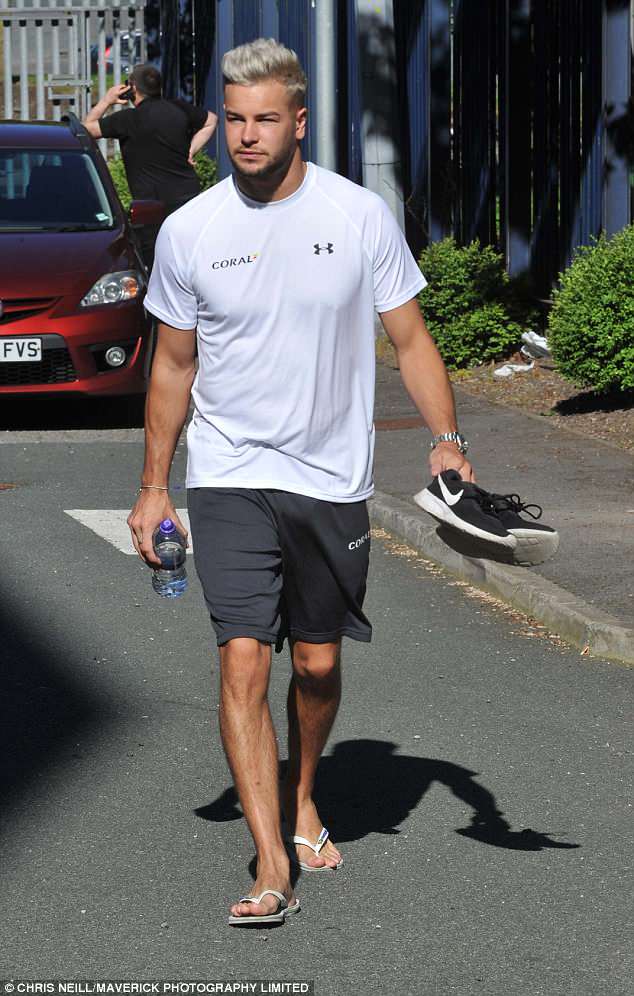 Chris Hughes will raise money for Macmillan Cancer Support in the race, and has already passed £3,000 in his fundraiser

‘The diet is based on increasing food frequency to six small feeds a day of less energy dense foods so the body has a constant supply of sugars,’ Dr Wilson says.

WHAT ARE LOW-DENSITY FOODS?

Low density foods are those which have fewer calories per gram.

Scientific studies have shown that a diet with a lot of low-density foods is effective for weight loss because people can eat more food without the number of calories skyrocketing.

This makes them feel full for longer, reducing the risk of them snacking on unhealthy, fattening foods.

Foods with low energy density include:

The most common mistake people make when trying to lose weight, he says, is mixing up the volume of calories with the volume of food.

He says it is important to eat more food that is naturally low in calories instead of smaller portions of food high in calories. That way meals are filling but lower in calories.

If it grows in the ground or on a tree, or you can catch it – eat it

Dr Wilson adds: ‘Anyone in the world could do this and lose weight. Think about a Mars bar, which is dense in calories – what if I told you a four-egg omelette with spinach is the same number of calories? Which do you think is going to be more filling?

‘The diet will have more potatoes and oily fats, and fewer carbohydrates. We want high fibre and high protein – fibre is good for satiety.

‘If it grows in the ground or on a tree, or you can catch it – eat it. Anything manufactured and convenience foods should generally be avoided.’

Hughes is bookmaker Coral’s #LoveRacing ambassador, and will be racing in aid of Macmillan Cancer Support in June; he has raised more than £3,000 for the charity so far.

‘I’m looking forward to trying the diet – it’ll be good food like eggs, fresh fruit, chicken, green vegetables, which I’ll be cooking for myself.

‘I think I’d cook more if I had more time, because I really enjoy eating good food and going out to restaurants.’ 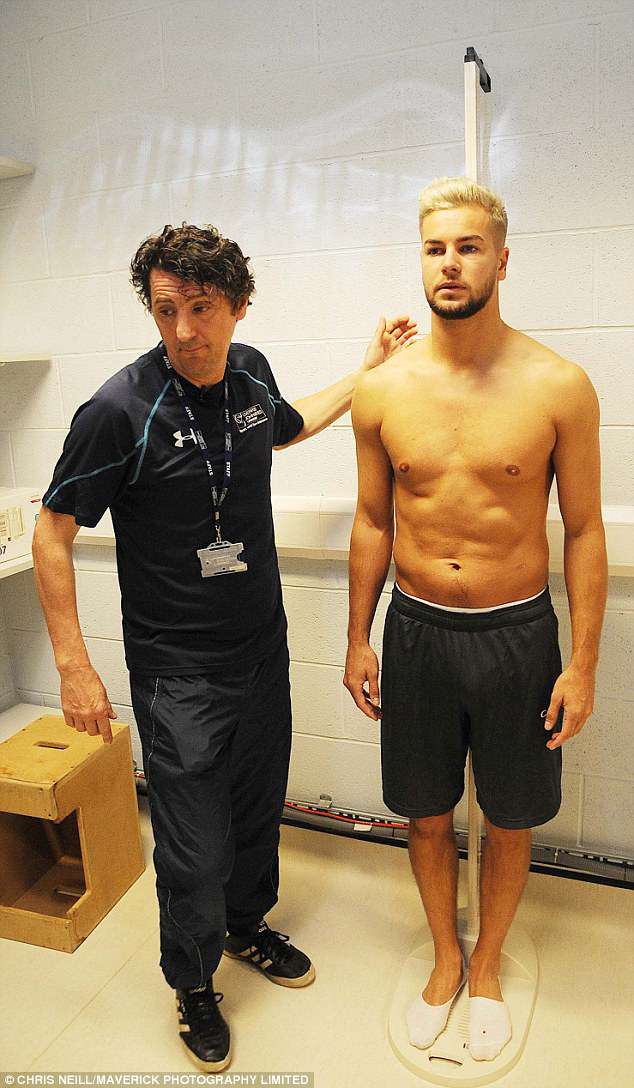 Hughes, who is six feet tall, started the weight loss programme at 12st0lbs, and hopes to shed seven to eight pounds in the next few weeks 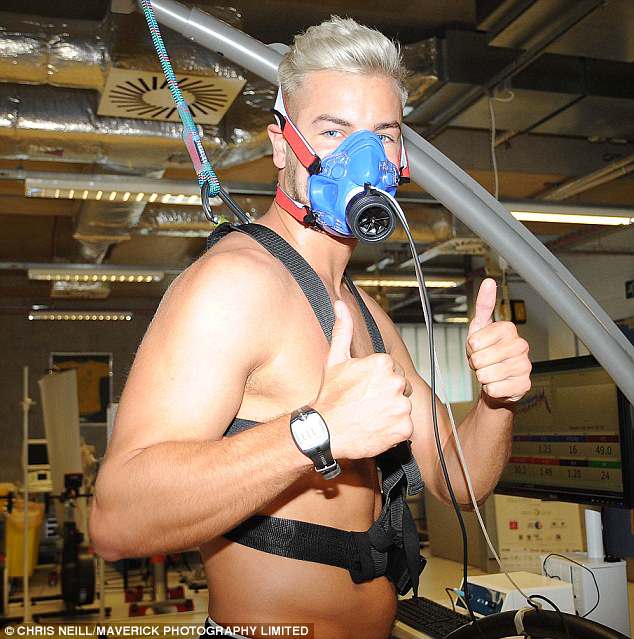 The reality star will run for 30 to 45 minutes at about 80% of his maximum effort, in order to maintain the optimum fat burning pace 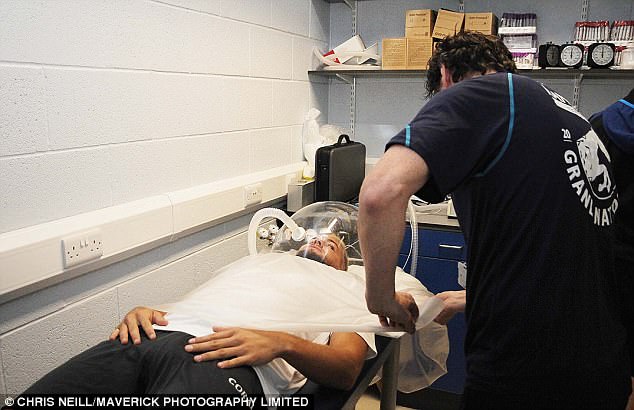 Hughes will run first thing in the morning because the body burns fat more effectively before eating.

‘It’s the most effective way to lose fat,’ Dr Wilson explains. ‘Your body utilises fat as an energy source much better in the morning.

‘If you eat breakfast first your blood sugar rises and your body will just use that for fuel. But if you don’t your body switches on fat metabolism.’

Hughes will run for between 30 and 45 minutes at about 80 per cent of his maximum effort, which Dr Wilson’s tests found is his optimum fat burning zone.

The run is ‘nowhere near a full sprint,’ Hughes says, but faster than a jog.

‘I’m going to work hard for this – I’m spending any free time I can get training, but I’ve been struggling to get in the gym,’ he adds.

‘It was very interesting to find out where my body stores the most fat and the level I need to work at to burn it off.

‘I’m confident I can lose the weight; I think it’s easily achievable. 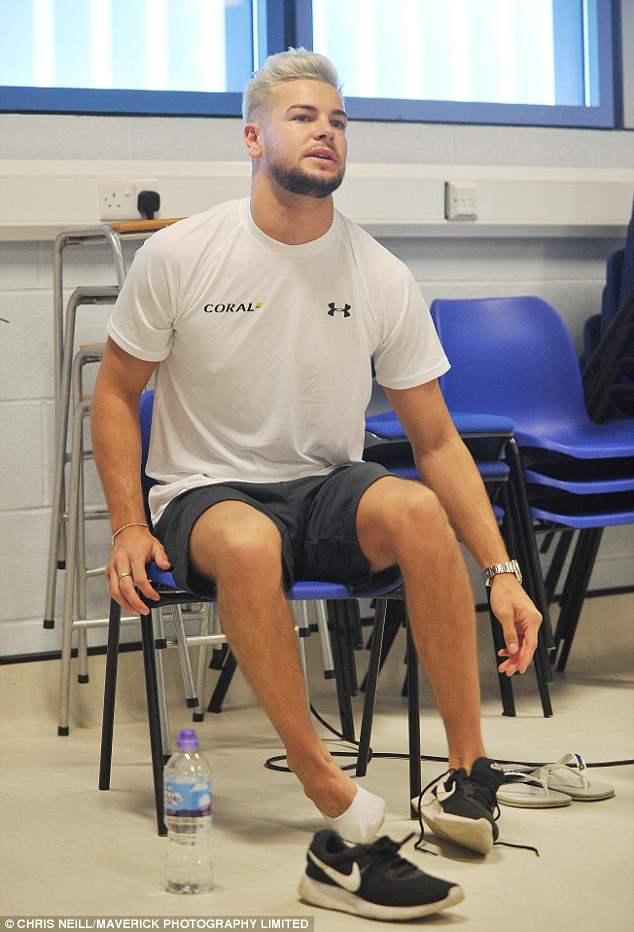 Hughes’ fitness is ‘well above average’, Dr Wilson says – the 25 year-old has played football for years, including for Kettering Town and Swindon Town 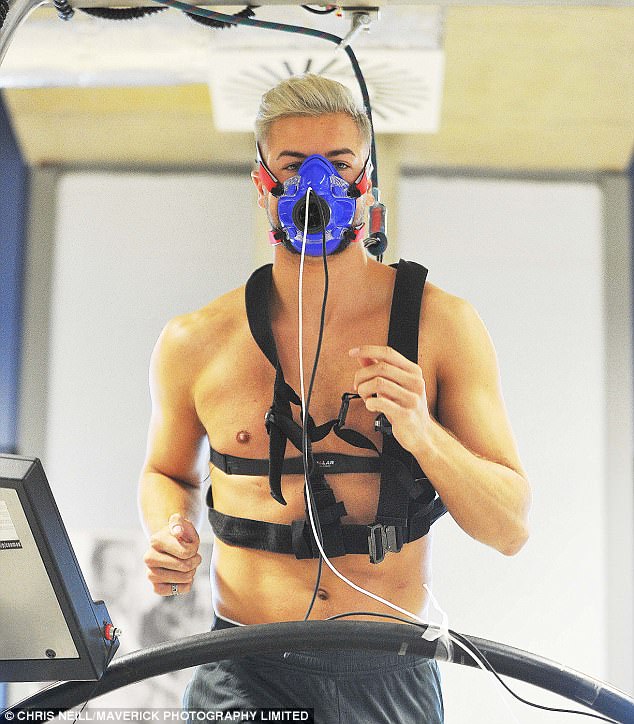 ‘I’m looking forward to the race because I’ve ridden horses since I was 15 but I’ve never done anything like this. It’s nice to be able to take a real hobby of mine and turn it into something.

‘No-one appreciates how fit you have to be as a jockey – the professionals make it look effortless.

‘You’re working every muscle in your legs to keep the horse going and it is difficult. I’ve got so much fitter from my training already.

‘For Love Island I wanted to look good so I was bigger, but this is different.’

People can donate to his fundraiser online.