Taking to Instagram, the international dressage rider, 19, reunited with her famous footballer dad Michael, 42, as they beamed in a sweet snap together.

The picture was shared by Gemma’s mum Louise as the pair sat on a yellow bean bag – similar to those famously doted around the Love Island villa’s garden.

Together: Love Island’s Gemma Owen reunited with her footballer dad Michael in a sweet snap as she returned to her family’s £4m Chester mansion after eight weeks in the villa on Saturday

Louise joked in her caption on her Instagram Story: ‘Oh no not more drama!!’ along with a palm tree emoji.

Gemma looked gorgeous in the snap as she wore a pair of denim shorts, white crop top and gold wedges, while accessorising with dark shades.

Meanwhile, Michael looked smart in a navy shirt and white shorts as he held a refreshing drink in his hand. 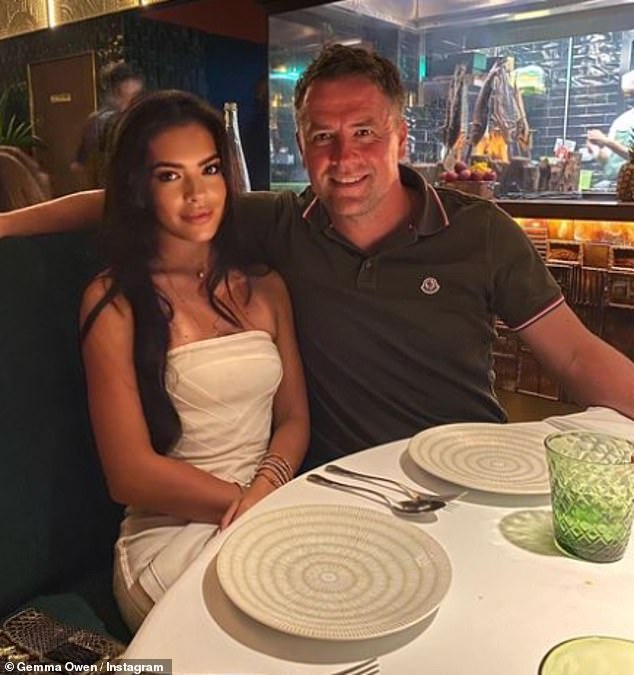 Close: The father-daughter duo share a special bond – with Michael sharing this snap as she left the villa earlier this week and said how proud he was of her in the caption

Earlier in the day Gemma shared a video of her heading inside her sprawling family home, where she reunited with her beloved pets.

However, her footballer dad Michael was quick to remark that she didn’t include him in her sentimental moment as he quipped in the comments: ‘You missed me off the clip.’

It comes after she and beau Luca Bish appeared in glum spirits as they headed home after filming Love Island’s reunion on Thursday night following a row.

But Gemma was all smiles and had clearly put the tiff behind her as she settled back into her family abode after her stint in Spain. 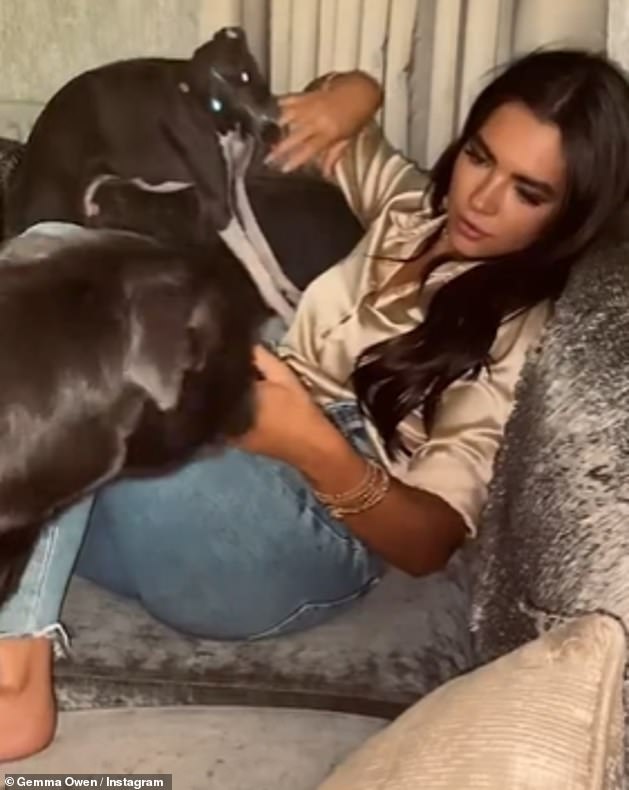 Love: Earlier in the day Gemma shared a video of her heading inside her sprawling family home, where she reunited with her beloved pets

Ditching her bikini for blue skinny jeans and a champagne satin shirt, Gemma was seen walking through the front door into the living room, where she was greeted with a balloon arch, featuring the Love Island logo.

She was then seen getting emotional as two of her dogs ran in to welcome her, with the beauty seen bending down to greet them.

Gemma then made her way into the stables where she was then seen sharing a sweet hug with one of her twelve horses. 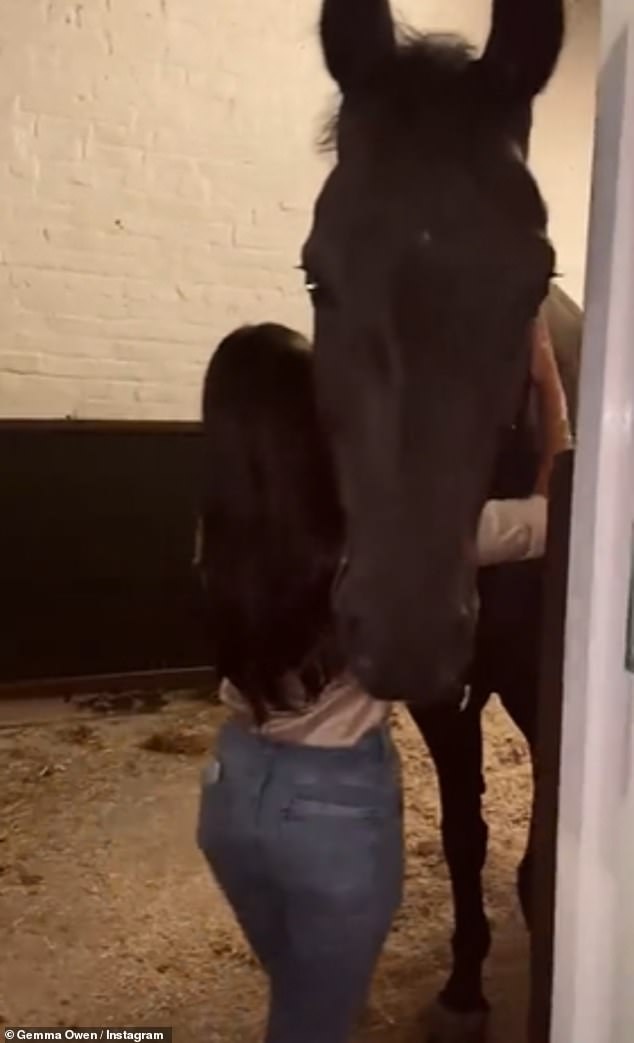 Back together: Taking to Instagram, the international dressage rider, 19, shared a video of her reuniting with her horses and dogs

The clip then cuts to the reality star sitting on the sofa as she cuddles up to her beloved pooches after weeks of being apart.

Captioning her post, she penned: ‘Reunited with my boys.’

And while several of her followers were quick to comment on how adorable the sweet moment, her dad was more concerned that he didn’t feature in his daughter’s latest post.

Gemma lives in the grade-II-listed manor in the Welsh countryside with her famous footballer dad Michael, mum Louise Bonsall, and three siblings Emily May, 14, Jessica, 12, and James Michael, 16. 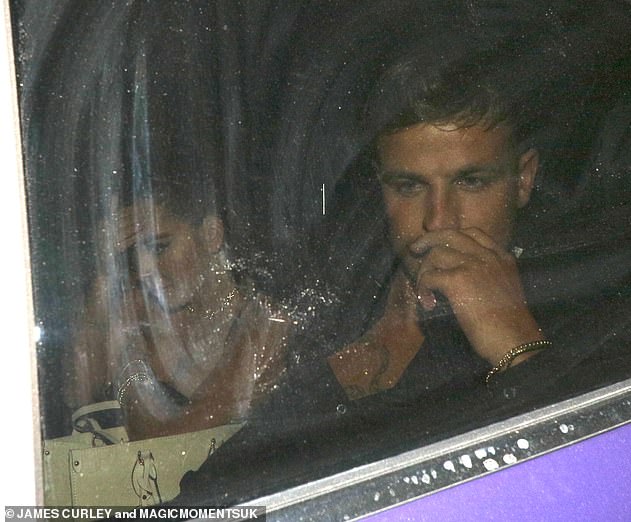 Uh oh: It comes after she and beau Luca Bish appeared in glum spirits as they headed home after filming Love Island ‘s reunion on Thursday night following a row

And while Gemma settled in at home, her beau Luca revealed he’s planning on moving house to Chester to be near his girlfriend  after they found love on the ITV dating show.

The fishmonger, 23, who hails from Brighton, has told how he is looking for somewhere to rent in the celebrity hot spot but won’t be moving in to her family’s estate.

Speaking after leaving the villa in second place with the dressage rider, 19, he said: ‘There is no middle ground – it’s Chester or nothing!’ 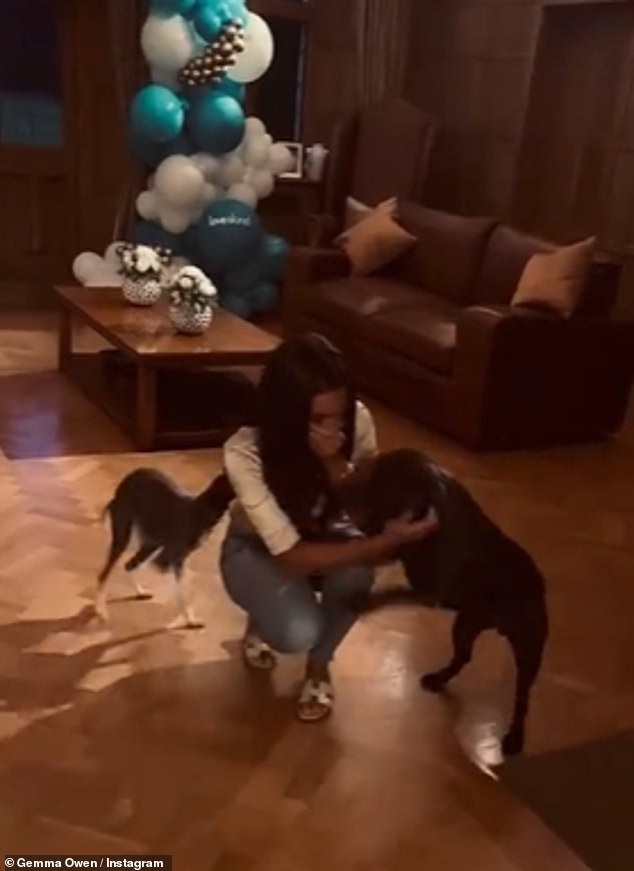 Cute: She was seen getting emotional as two of her dogs ran in to welcome her, with the beauty seen bending down to greet them

‘I’m happy to go wherever she wants me to go. I haven’t got too many commitments back home so it’s easier for me to move. Whatever makes us happy and whatever is right we’ll do. Hopefully if I move near her, in time we’ll get a place together.’

He added: ‘Just to be near her family I’ll love. Hearing stories about her barbecues and stuff like that, I’m quite excited and I feel like I’ll fit right in.

But despite planning on moving away, Luca still made a bid to convince Gemma to move own south as he shared a glimpse of his luxury abode on Instagram on Friday.

He shared an image of his stylish bathroom adorned with marble tiles and a large free-standing bath – with stunning countryside views seen through the window. 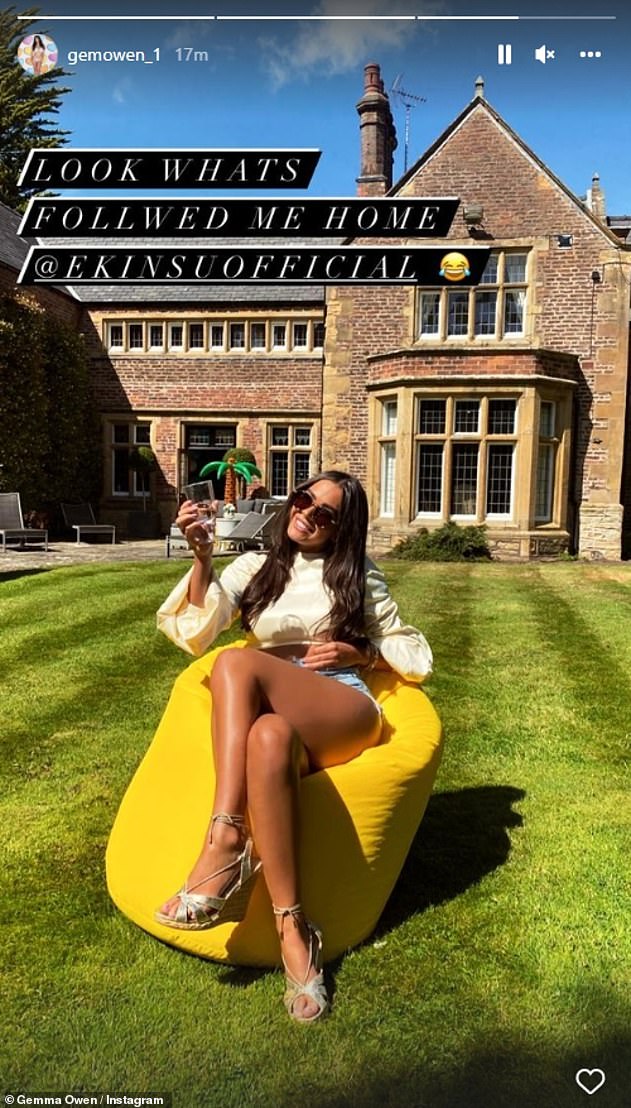 Chilled: Gemma was later pictured relaxing on pal Ekin-Su’s favourite yellow beanbag as she settled in at home

He also shared a clip of a horse in a field, captioning his short clip: ‘Am I selling Brighton to you yet Gemma Owen?’

The couple previously fuelled speculation that there was trouble in paradise as they sported faces of thunder while heading home from the reunion show, with Luca later confirming they had argued as he remarked: ‘She’s got the right hump with me!’

However, Gemma and Luca put on a united front on Friday, as the dressage champ finally shared a loved up of the pair following the filming of the Love Island reunion.

The Love Island runners up wrapped an arm around one another, as fishmonger Luca, 23, beamed for a chic snap with Michael Owen’s daughter. 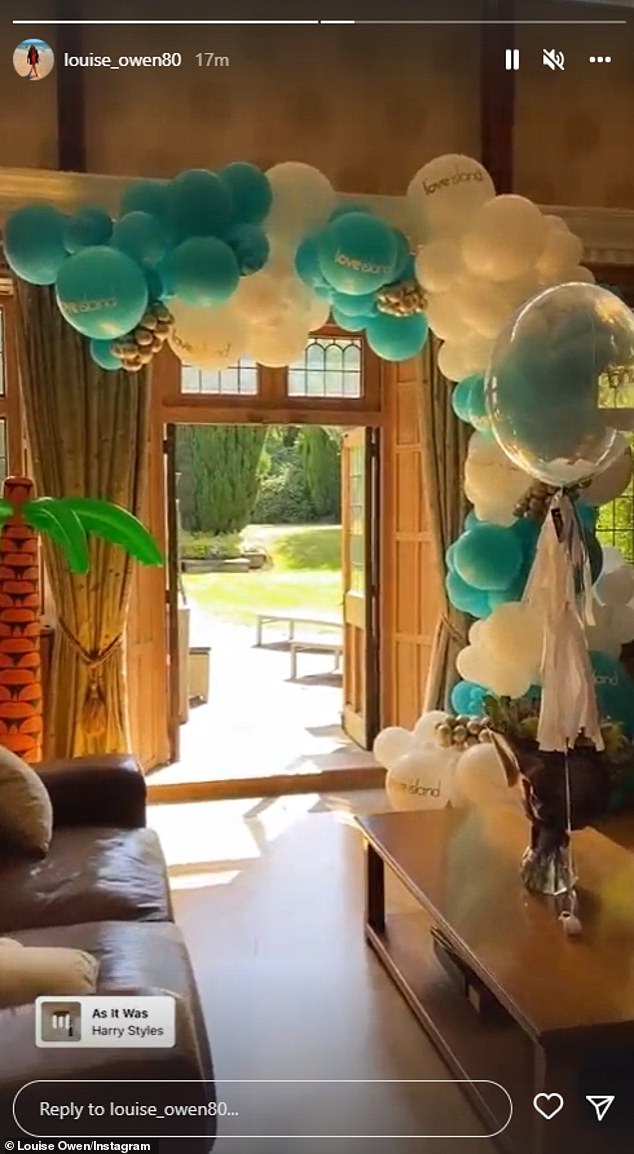 What a welcome: He mum Louise also shared another glimpse of Gemma’s welcome home decorations

‘Reunion night with this one / It was so good to see everyone again! Don’t forget to watch it on @loveisland aftersun Sunday night @itv2’, wrote the star.

Gemma looked stunning as she donned a satin, cowl neck midi dress in a chocolate brown, with a thigh grazing slit detail.

It marks the first photo shared of the couple together on Gemma’s account in a week, after fans spotted an apparent snub towards Luca by her family.

The dressage rider’s account handlers have avoided sharing any mention or photos of the fishmonger in the run up to the final. 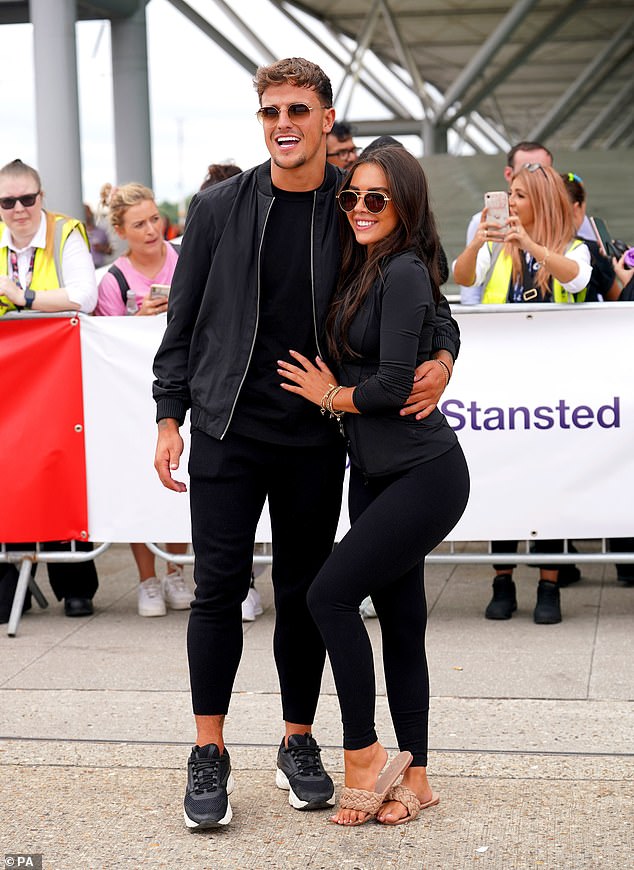 Plans: While Gemma settled in at home, her beau Luca revealed he’s planning on moving house to Chester to be near his girlfriend after they found love on the ITV dating show

And following Gemma and Luca’s second-place finish, Luca’s family were quick to congratulate the couple, posting a snap of them together with a gushing caption.

It read: ‘Thank you SO much from the bottom of our hearts for all of the support you’ve shown this gorgeous couple. So excited to continue watching your journey from the outside. You really did win by finding each other.’

This was in stark contrast to Gemma’s Instagram, which noticeably only posted solo snaps of the brunette beauty in the lead-up and following the final, with beau Luca noticeably absent.

Sharing a solo snap of Gemma clad in a nude ruched gown, her loved ones penned the caption: ‘Words can’t describe how proud we all are of Gemma.

‘She has shown the nation how mature, honest and classy she truly is. From the bottom of our hearts thank you for all the love and support…Gemma is going to be SO overwhelmed.

‘We are passing this back to Gemma now… We have loved running her account and being part of her @loveisland journey. We can’t wait for what the future holds.’

Eagle-eyed fans at home were quick to notice this, and took to Twitter to suggest that Gemma’s family were not overly fond of Luca and that they were doing ‘damage control’ to protect Gemma’s brand. 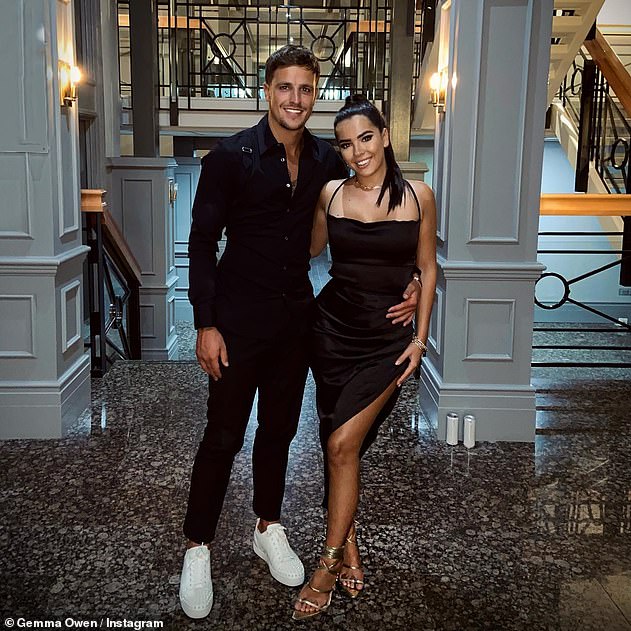 What row? Gemma and Luca put on a united front on Friday, as the dressage champ finally shared a loved up of the pair following the filming of the Love Island reunion