Jazmine Nichol has revealed she is now stable after developing sepsis.

The Love Island star, 21, took to her Instagram Stories on Friday where she posted an update on her terrifying health scare, admitting she was ‘feeling lucky to be alive’ after previously telling fans she’d been rushed to hospital for emergency surgery.

The nightclub manager – who shot to fame as a Casa Amor bombshell – revealed that she was ‘vomiting uncontrollably’ and turned ‘blue/grey’ and as sepsis developed within minutes after she was rushed to A&E needing emergency surgery.

Earlier this week, Jazmine shared a snap of herself hooked up to a drip while lying on a hospital bed and revealed that she’d undergone an operation after becoming ‘really unwell’ with – what was at that time – a mystery illness.

Stable: Love Island bombshell Jazmine Nichol, 21, has revealed she is stable after developing sepsis as she took to her Instagram Stories on Friday to post an update on her health scare

Jazmine wrote: ‘I’d like to firstly thank everyone for their concern over my health this past week and let everyone know what’s happened.

‘I became unwell in the early hours of Tuesday morning and was taken into hospital later that day. Whilst waiting to be seen my condition deteriorated rapidly to what I now know is sepsis.

‘Had it not been for the quick thinking and action of a staff member who noticed how unwell I had become things could have been very different.

‘Within minutes I had turned a blue/grey colour and was vomiting uncontrollably. My blood pressure was 70/30. It was at this point that the doctors informed my family that I was seriously unwell. 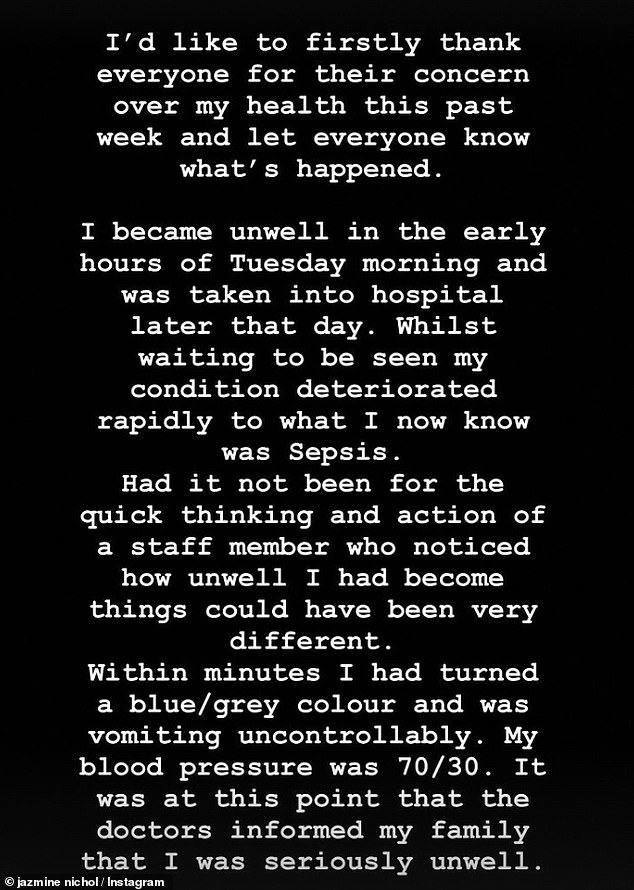 Terrifying: The nightclub manager revealed that she was ‘vomiting uncontrollably’ and turned ‘blue/grey’ and as sepsis developed within minutes after she was rushed to A&E 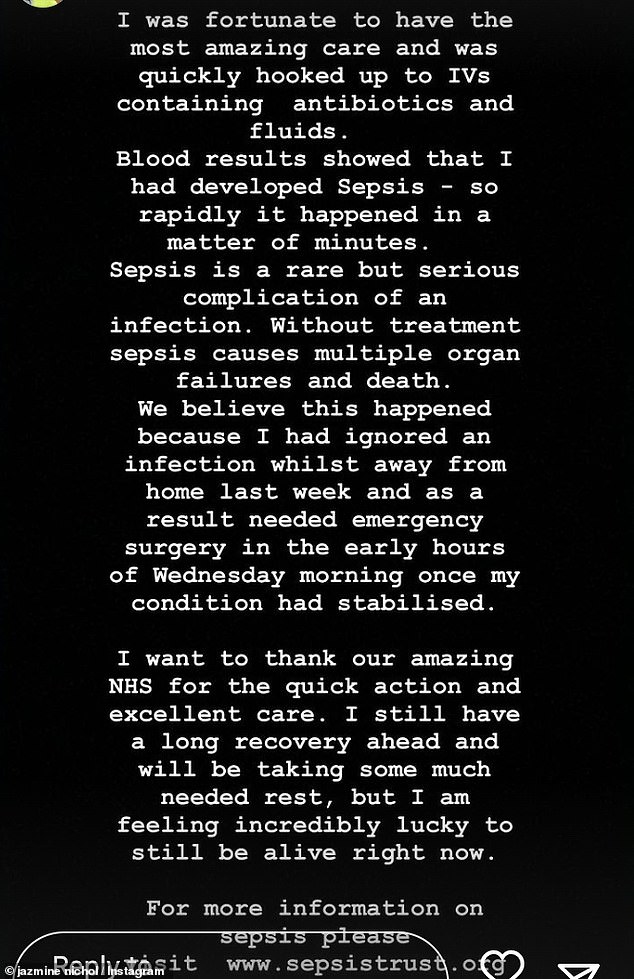 Grateful: Jazmine admitted she was ‘feeling lucky to be alive’ after previously telling fans she’d been rushed to hospital for emergency surgery

‘I was fortunate to have the most amazing care and was quickly hooked up to IVs containing antibiotics and fluids. Blood results showed that I had developed Sepsis – so rapidly it happened in a matter of minutes.

On a second post, the reality star continued: ‘Sepsis is a rare but serious complication of an infection. Without treatment sepsis causes multiple organ failures and death.

‘We believe this happened because I had ignored an infection whilst away from home last week and as a result needed emergency surgery in the early hours of Wednesday morning once my condition had stabilised.’

‘I want to thank our amazing NHS for the quick action and excellent care. I still have a long recovery ahead and will be taking some much needed rest, but I am feeling incredibly lucky to still be alive right now.’

Jazmine then shared a link for her followers to find out more about sepsis. 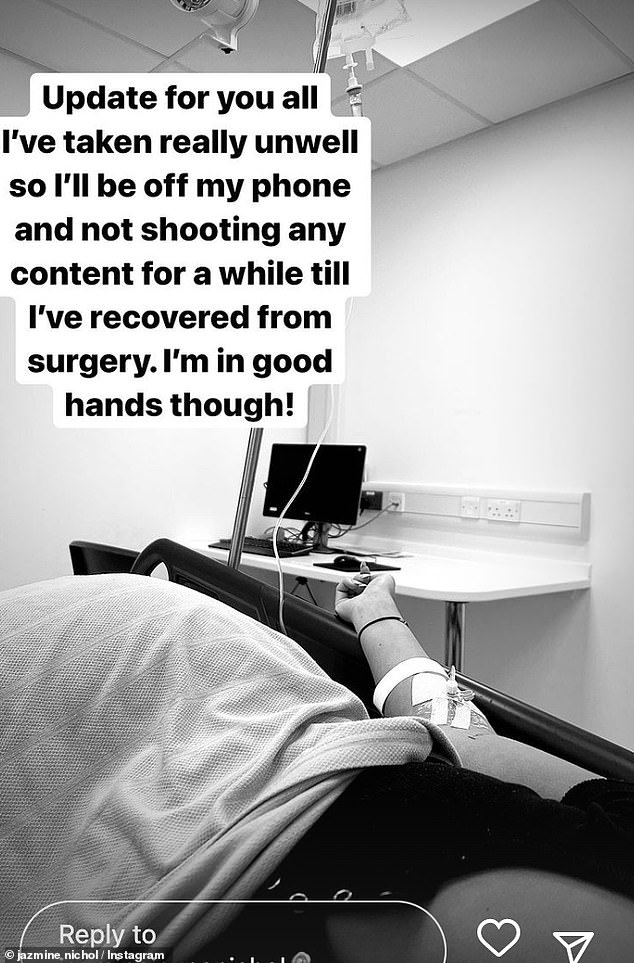 Oh no! It comes days after Jazmine revealed that she’d been rushed to hospital for emergency surgery, after becoming ‘really unwell’ with – what was at the time – a mystery illness 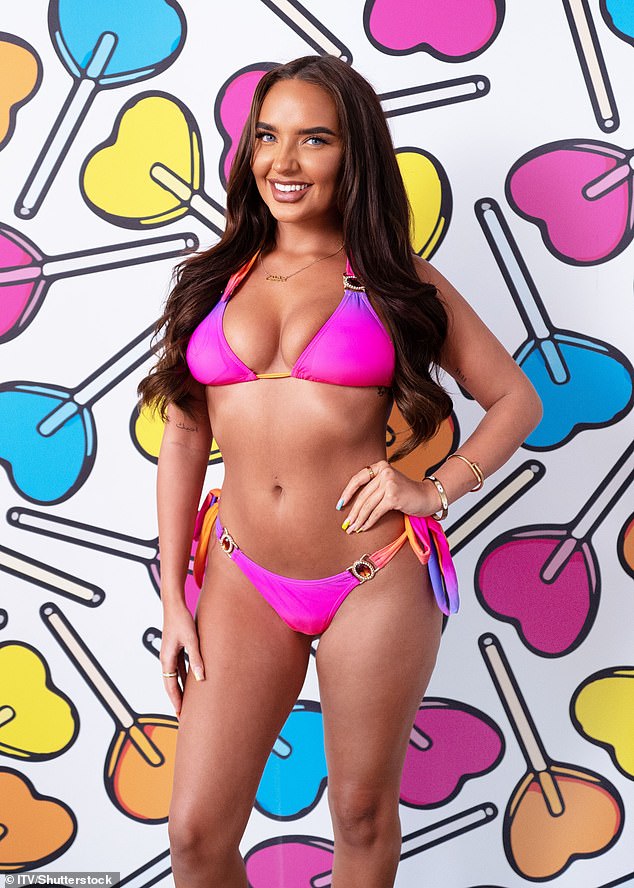 TV star: The reality star took to her Instagram Stories on Tuesday night where she revealed that she had undergone an operation

Jazmine’s updated comes days after the Casa Amor beauty revealed that she’d been rushed to hospital for emergency surgery, after becoming ‘really unwell’ with – what was at the time – a mystery illness

Alongside a concerning photograph of herself hooked up to a drip, she wrote: ‘Update for you all. I’ve taken really unwell so I’ll be off my phone and not shooting any content for a while till I’ve recovered from surgery. I’m in good hands though.’

The reality star was last spotted enjoying a day out at PrettyLittleThing’s We Are FSTVL at Damyns Hall Aerodrome in Essex on Sunday.

Jazmine looked happy and healthy as she posed in a skimpy green bikini top and matching mini skirt. 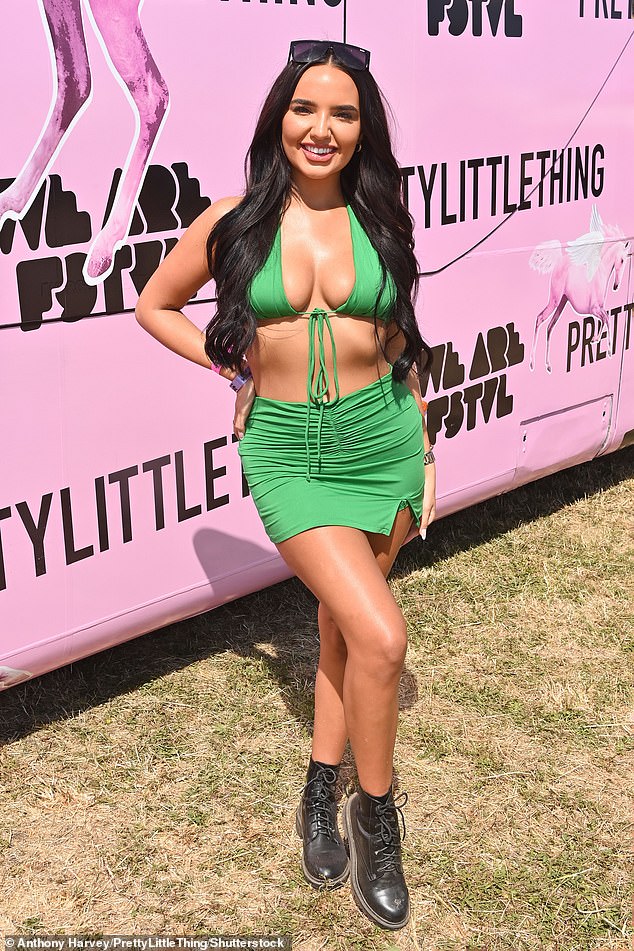 Having fun: The reality star was last spotted enjoying a day out at PrettyLittleThing’s We Are FSTVL at Damyns Hall Aerodrome in Essex on Sunday

After leaving the Spanish villa, she told her social media followers: ‘Hi guys, it’s Jaz, I’m back. Just want to say a huge thank you for all of the love and support I’ve seen so far.

‘I’m so overwhelmed with all the lovely messages I’ve seen and the funny memes!’

She continued: ‘I’m excited for all of you to see my personality that was not shown on screen and the Jaz that the villa saw, this is only the start.’ 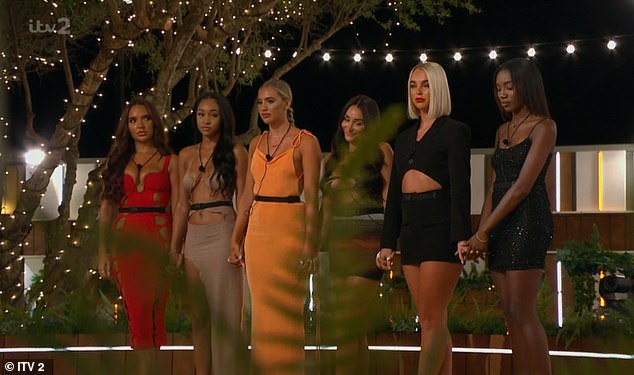 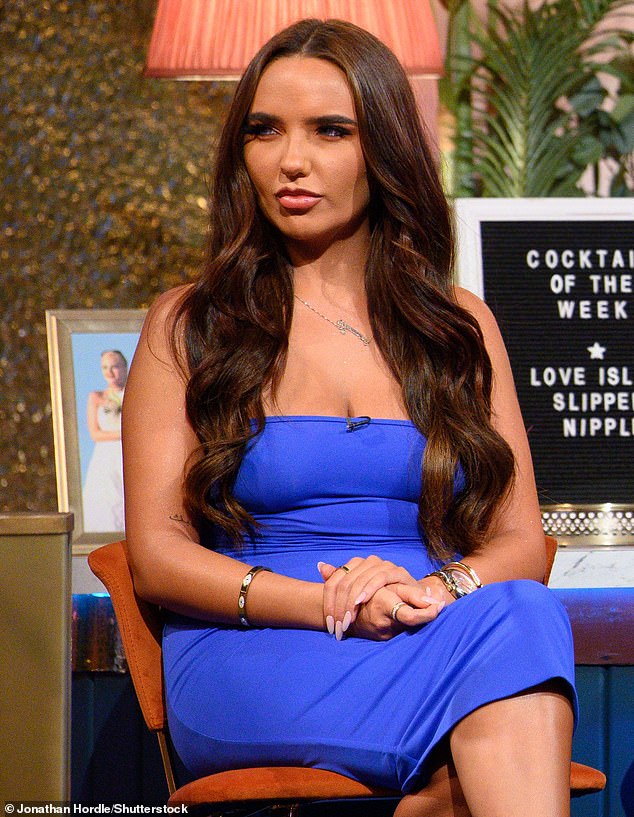 Bombshell! Following her stint, Jazmine shockingly revealed she shared a connection with Andrew Le Page which wasn’t aired on the show

Jazmine entered the show alongside EastEnders extra Summer Bowte, 22, who had her eyes on Dami; graphic designer and ring girl Coco Lodge, 27, who was hoping to steal Andrew Le Paige from Tasha.

As always, the Islanders had to coupled up in order to secure their place in the villa, with those who stayed single finding themselves dumped from the island.

And following her stint in Love Island, Jazmine shockingly revealed she shared a connection with Andrew Le Page which wasn’t aired on the show.

The nightclub manager claimed that Andrew was interested in her but it wasn’t shown during the one-hour long episodes.

Appearing on a podcast after being dumped from the island, Jazmine told how Andrew called her the ‘girl of his dreams’ and they enjoyed a day of flirting, as she declared: ‘I thought I was coming out with a boyfriend’. 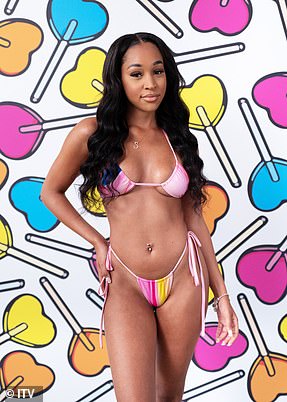 What are you looking forward to in the Villa? I think that I’m just genuinely good vibes – very goofy, very silly. Everyone will be fun around me. I don’t really take things too seriously. I feel like I might end up bringing some drama because I do want to go full force with Dami… 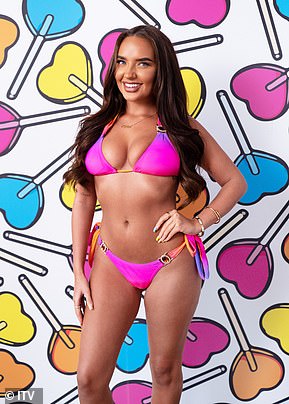 Who have you got your eye on in the Villa? Jacques – humours the biggest thing for me in a partner. I never go for looks and I don’t have a type at all. It’s definitely who makes me laugh 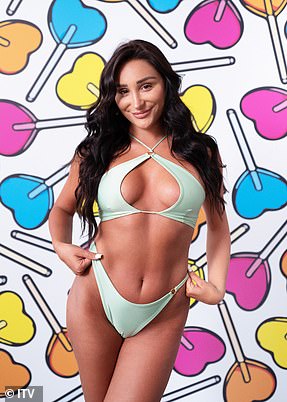 How would your friends/ family describe you? They’d probably describe me as a predator. I’m super flirty! I give off big energy and boys gravitate towards me and I’m always flirty. 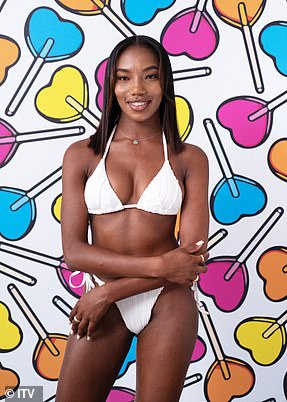 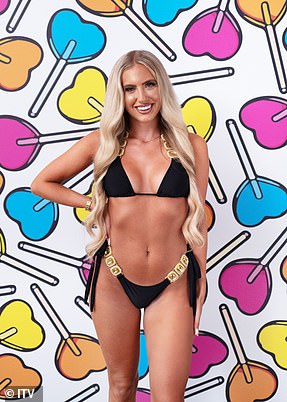 Why have you signed up for Love Island? My mum got married at my age and my cousin is already engaged so she’s always told me how I should hurry up and find someone. I’m terrible at picking men so I thought Love Island would do a better job than me! 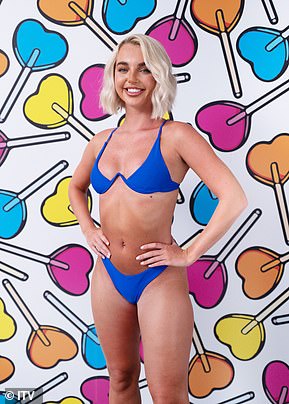 Who have you got your eye on in the Villa? I’m actually Italian, too. So I really like Davide, he reminds me of a lot of my family and he’s gorgeous. I’ve never actually seen someone so good looking in my whole life!