She reportedly got caught in the middle of an ‘ugly altercation’ with her Love Island beau Brad McClelland in Brighton last week.

But Lucinda Strafford, 21, put her woes aside on Thursday, spending the day at the I Saw It First headquarters in Manchester.

The reality star stunned as she posed in a variety of different outfits, including a beautiful pastel mini dress and a hot pink smock which left her slender legs on show.

Simply stunning: Love Island’s Lucinda Strafford, 21, stunned in a figure-hugging pastel dress as she showed off her long legs and impressive tan in Manchester on Thursday

Lucinda, who rose to fame on the current series of Love Island and returned to the UK last week, posed in front of a pair of butterfly wings on a wall as she wore the pastel number.

The dress featured hues of pink, beach, white and blue and the shades perfectly accentuated her impressive tan after she sunned herself while filming in Majorca.

Her long blonde tresses were curled into a bouncy ‘do and rested over her shoulders and to her front, framing her pretty face.

She completed her look with a pair of baby pink strappy heels to boost her stature by a few inches. 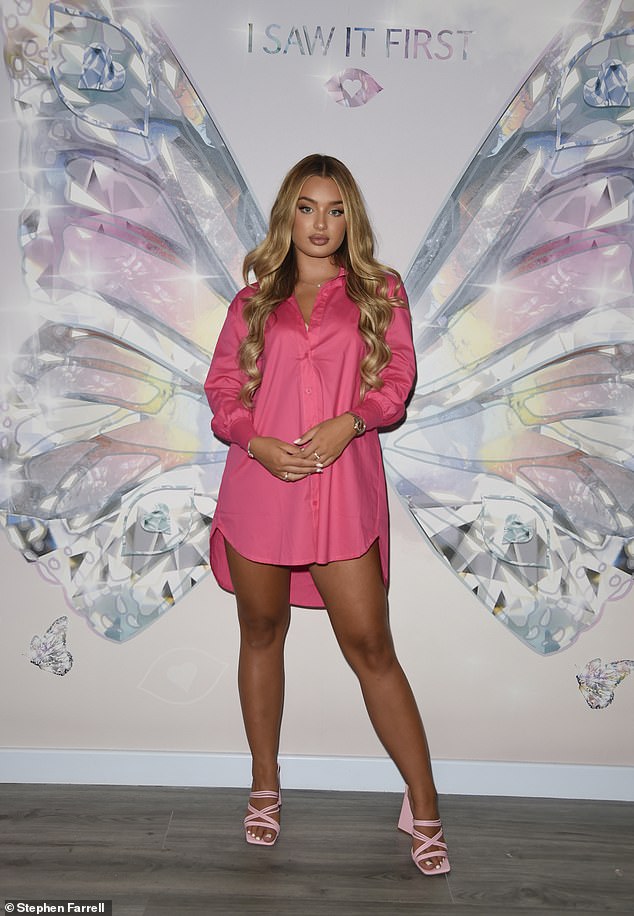 Style queen: The reality star was reportedly caught in a bust-up co-star beau Brad McClelland in Brighton last week but she put her woes aside in a pink smock at I Saw It First’s HQ

Going for another look, the television personality wore a hot pink dress which showed off her long slender pins.

The plunging neckline of the garment left her decolletage on show as she gave the camera a sultry look.

And, in another look, Lucinda opted for a grey co-ord consisting of cargo pants and a cropped top, displaying her midriff as she stood with her hands in her pockets. 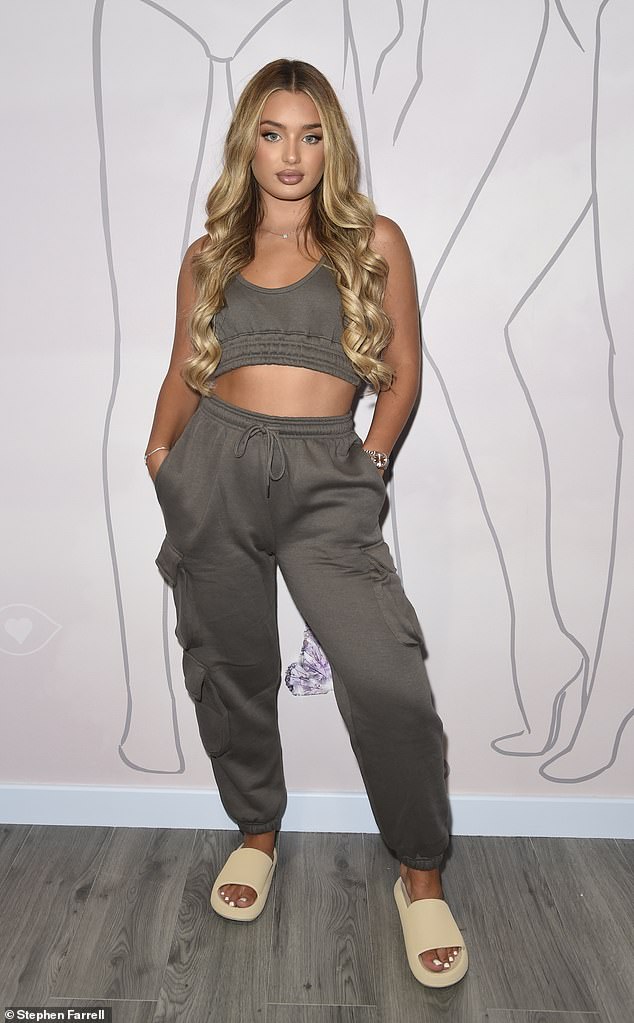 Keeping it casual: In another look, Lucinda opted for a grey co-ord consisting of cargo pants and a cropped top, displaying her midriff as she stood with her hands in her pockets 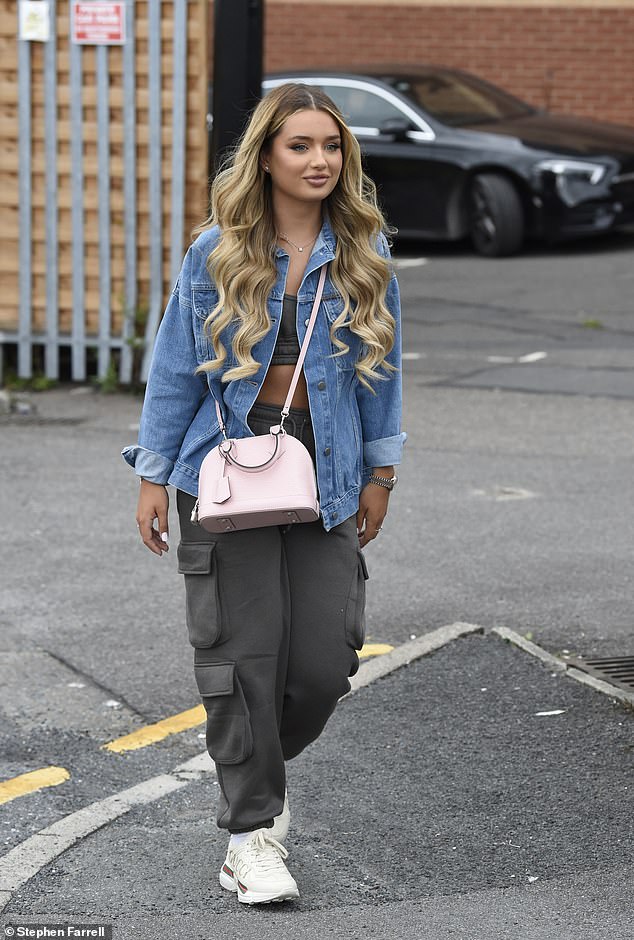 Stepping out: The television personality looked content as she wore her casual clothes, covering her arms with a blue denim jacket and carrying a pink bag

Lucinda’s fashion parade came after she and her Love Island beau Brad were caught in a bust up in a Brighton nightclub on Sunday night, according to eyewitnesses.

The dumped reality stars were allegedly out when Lucinda is said to have been caught flirting with another man in front of Brad.

Brad then confronted the guy in a heated exchange that got ‘very ugly’. 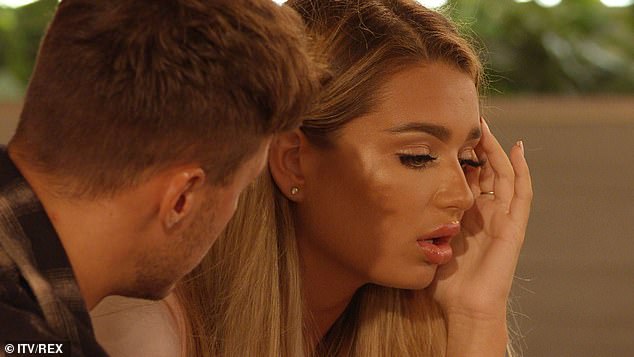 The bizarre dalliance between Lucinda and Brad continues, with the pair caught in a bust up in a Brighton nightclub Shoosh, according to eyewitnesses [pictured on Love Island]

Brad and Lucinda coupled up on the current series of Love Island but were forced to part ways, deciding that 26-year-old Brad would sacrifice his place in the villa and leave Lucinda there to continue her experience.

She wasted no time in coupling up with Aaron Francis, but the pair were dumped last week, with Lucinda already seen to have flitted back to Brad on the outside world.

Yet she seems to be keeping all options open, going by Sunday night’s escapades, as reported in The Sun.

Sources say that the nightclub’s security had to get involved, asking Brad to leave at 2:30AM on Monday morning. 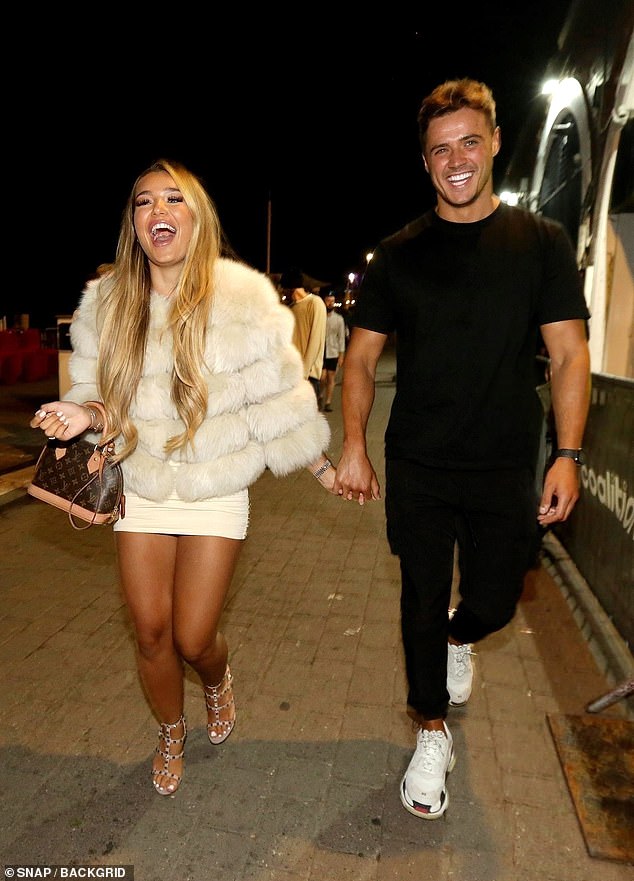 Calm before the storm: The pair were snapped arriving at the club ahead of the dramatic row on Sunday evening, unaware of the tiff that was about to befall them

Brad was heard threatening the other man, yelling: ‘Come on then, I’ll knock you out! You’re just a little boy!’

Brad – from Northumberland, visiting Brighton to see ex-air hostess Lucinda for their night out at Shoosh – apparently became riled when Lucinda ‘secretly invited the other man to meet her in the VIP section’ of the club.

Brad’s pals claim this was the case, while Lucinda’s friends told The Sun it was all a big misunderstanding.

The publication shared photos of her chatting to both men, with Brad clocking her speaking to the second man and yelling at him, while Lucinda attempted to placate him.

‘It got very ugly. Lucinda was playing with fire and has strong feelings for both lads. The men didn’t fancy sharing and it got very heated,’ a source said. ‘Trouble flared again outside when Lucinda and her other enthusiast left at the same time.’

A friend of Lucinda said: ‘A man kept coming over and trying to talk to her in front of Brad. It got very annoying.’

Lucinda appeared on Lorraine hours later with Aaron, where they took part in an awkward joint interview with Christine Lampard.

Aaron lamented missing out on spending time in Casa Amor, while Lucinda chatted about her recently rekindled romance with Brad. 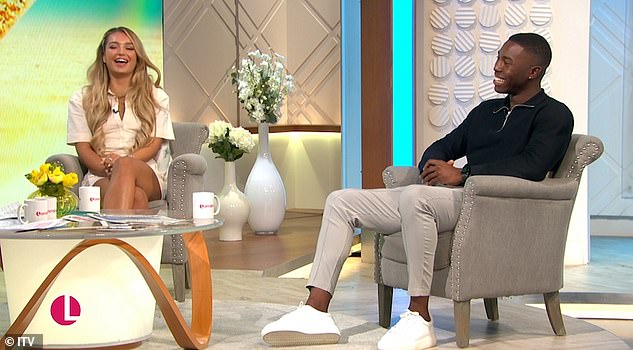 Hard to watch: Lucinda appeared on Lorraine hours later with Aaron, where they took part in an awkward joint interview with Christine Lampard

Aaron said: ‘We were only coupled up for like three or four days. So, we’re like “alright guys, calm down,” but obviously it’s easy to misinterpret.’

Christine turned to Lucinda and stated: ‘And you were recoupling with Brad at the weekend, we saw you met up in the papers!’

Lucinda was photographed looking cosy with Brad McClelland in Brighton, who she was coupled up with before she moved onto Aaron.

While looking over at Aaron, Lucinda responded to Christine , saying: ‘Yeh I met up with Brad. It’s still early stages at the moment. But yeh, we’ll see how things go.

‘I had a good connection with him, but our time got cut short. It’s early stages. It’s up in the air at the moment.’

Aaron looked notably uncomfortable and when asked about the situation confessed: ‘I’m gutted I missed lads holiday, at Casa Amor.’ 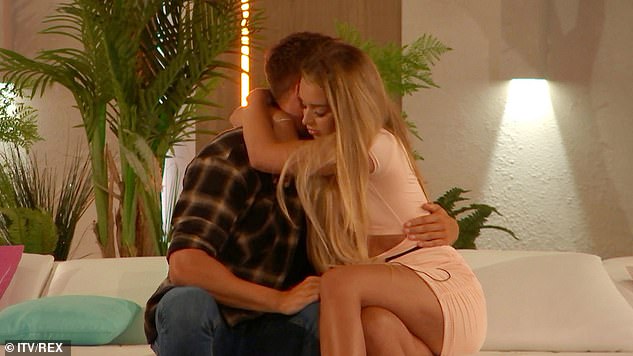 Thoughtful: The pair said an emotional farewell just before Lucinda cracked on with Aaron