They’ve been happier than ever three months after leaving the villa.

And Love Island’s Megan Barton-Hanson was showed her love for beau Wes Nelson on Thursday, as they attended the launch of Portr8’s, a gallery from Three UK to celebrate its Phones Are Good campaign.

The couple shared a cheeky kiss as they arrived for the event in London’s Soho Square, with Megan her typically glamorous self in a sexy black mini dress.

Loved-up: Love Island’s Megan Barton-Hanson was showing her love for beau Wes Nelson on Thursday, as they attended the launch of Portr8’s gallery in London’s Soho Square

Megan was putting on a leggy display as she attended the launch event, going for a leggy black dress with matching heels and cinching in at the waist with a jewelled Gucci belt.

The Essex beauty pulled her hair into a sleek topknot as she cosied up to her man at the launch, who was perfectly matching in a black ensemble.

The couple couldn’t hide their love for each other while sharing a cheeky kiss at the event, which took classic portraits from history and gave them a modern twist. 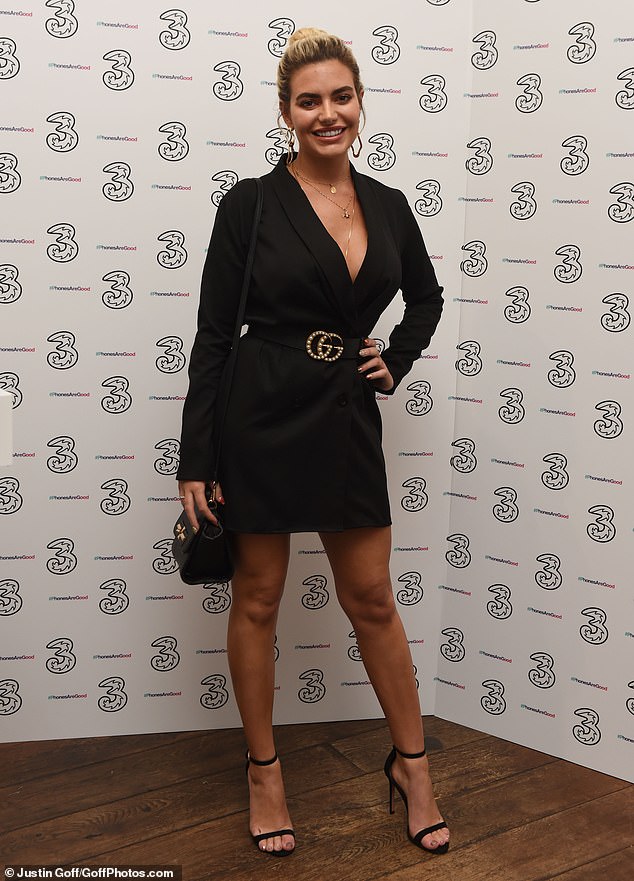 Leggy: The Essex beauty showed off her trim pins in a black minidress cinched at the waist with a Gucci belt, with her blonde hair pulled into a sleek high bun 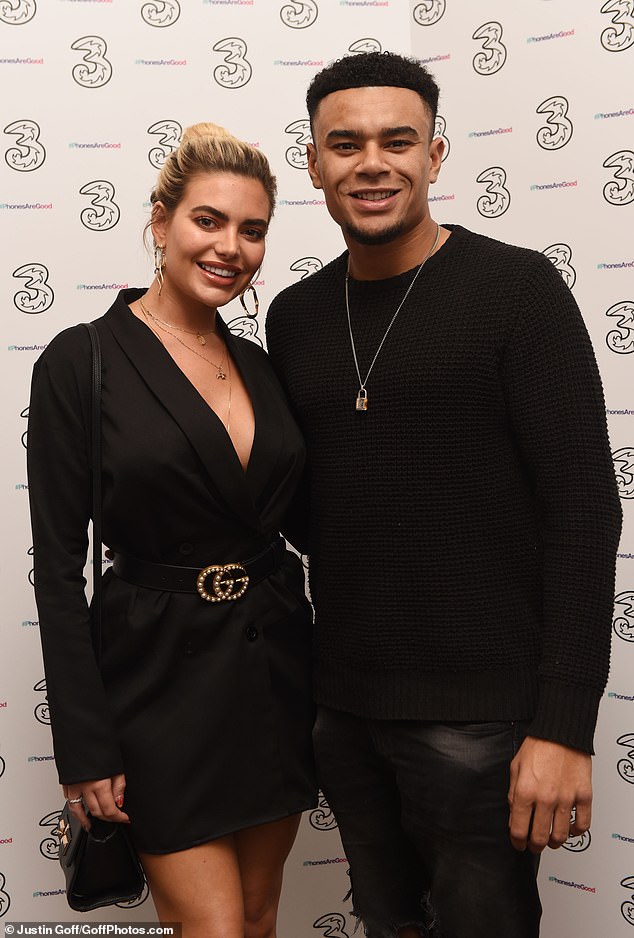 Happy pair: She and Wes were the picture of loved-up bliss in matching ensembles, at the launch in honour of the mobile phone network Three 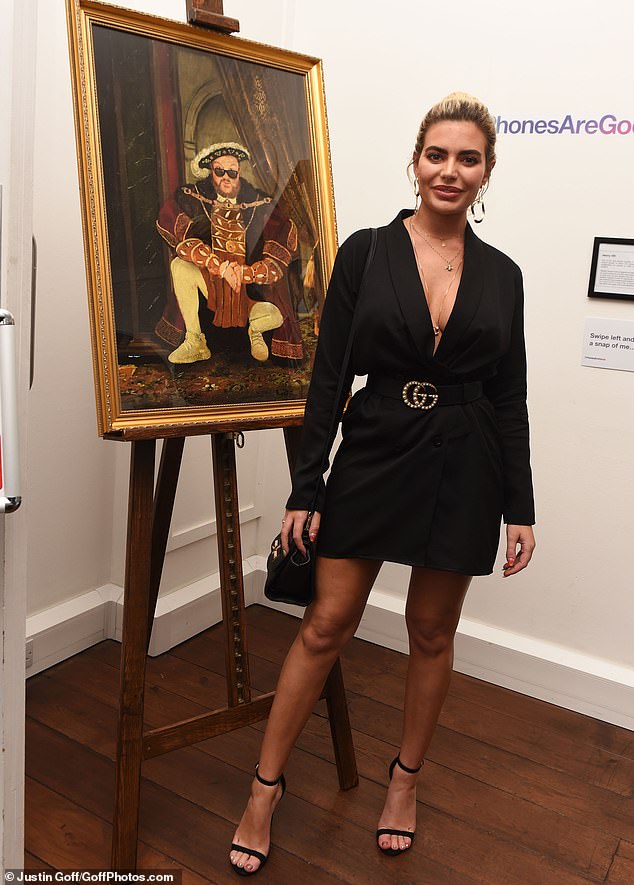 Quirky: The exhibition took iconic pieces of artwork and gave them a quirky Instagram-friendly twist 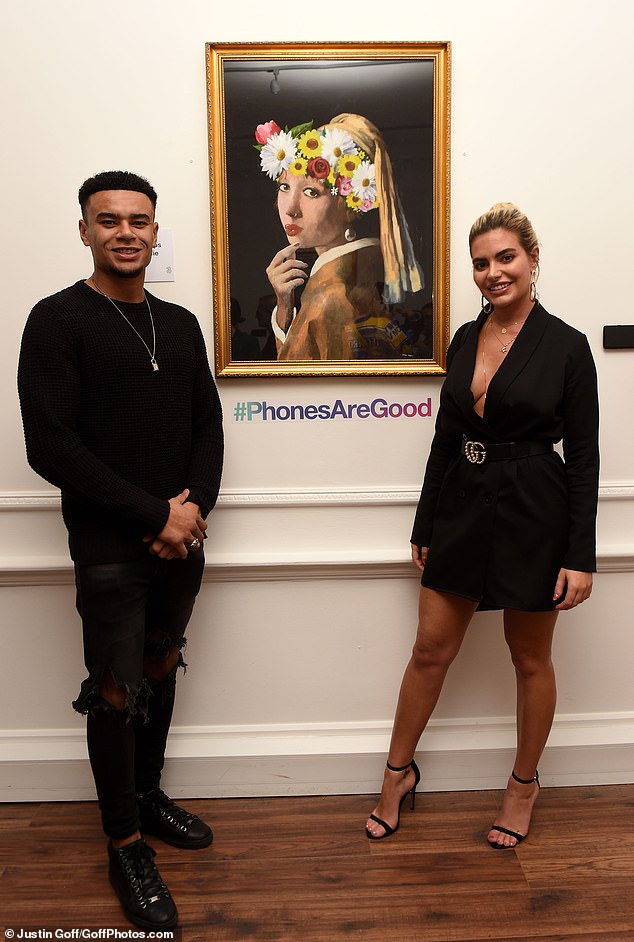 Big deal: The campaign is made to promote the positive impact mobile phones have on society 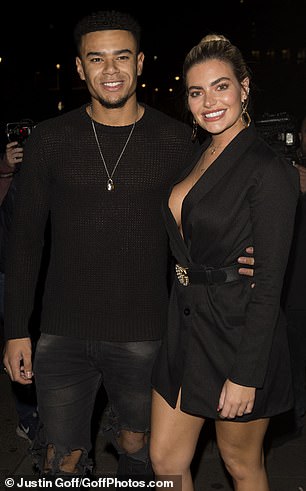 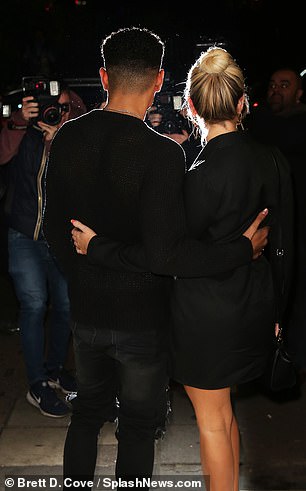 Loving it: Megan and Wes have been happier than ever three months after leaving the Love Island villa

Megan and Wes’ outing came after the blonde spoke honestly about her struggles with mental illness in an exclusive chat with MailOnline.

She said: ‘I think I’m very busy and I don’t have time to think about things, When I was a dancer I had lots of time to think and sit down but I need to keep my mind busy…

‘The villa really helped me. Being in the villa away from having to earn money and social media it was so stripped back and you’re with people who love you for being you and that’s great.’ 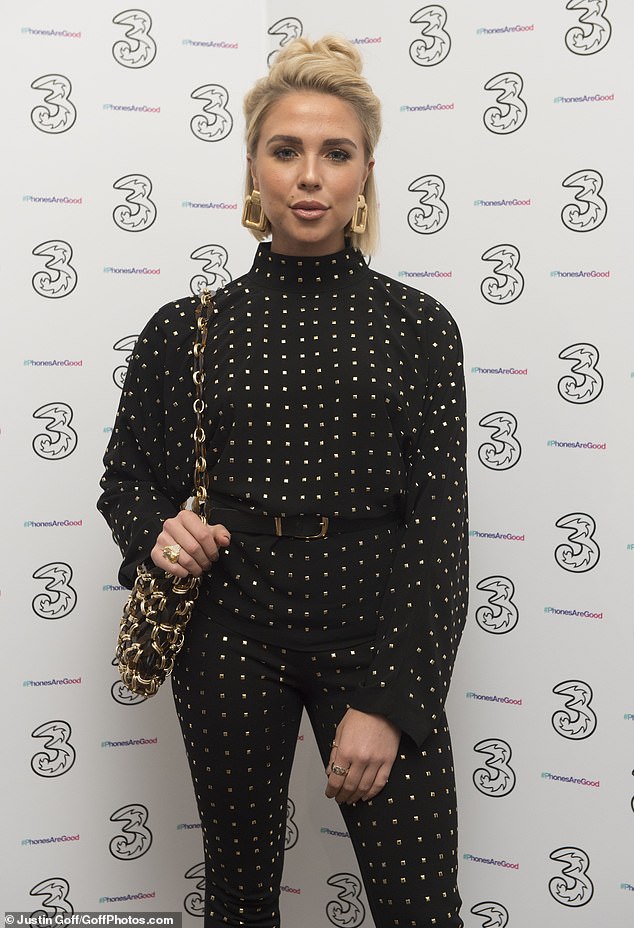 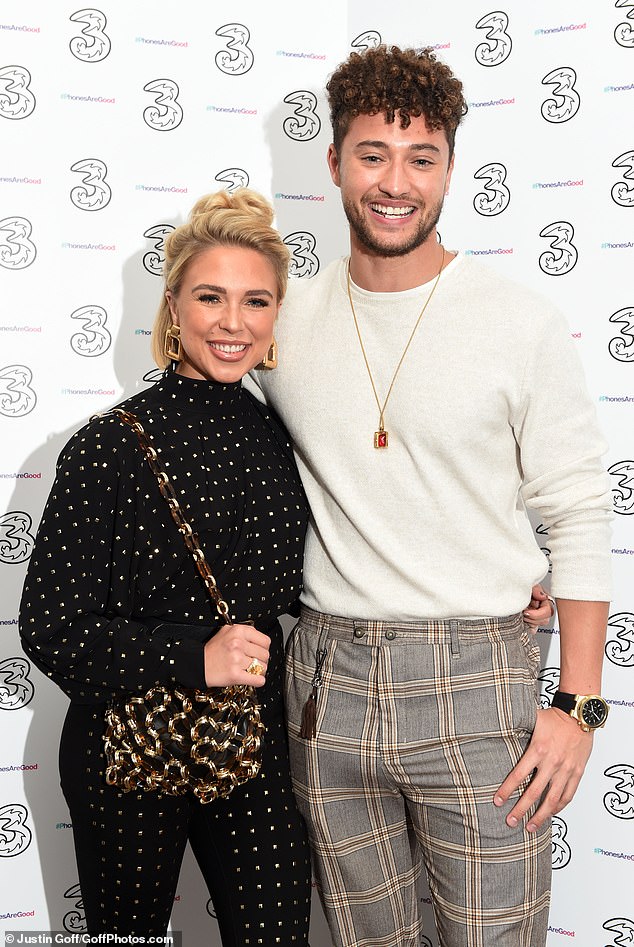 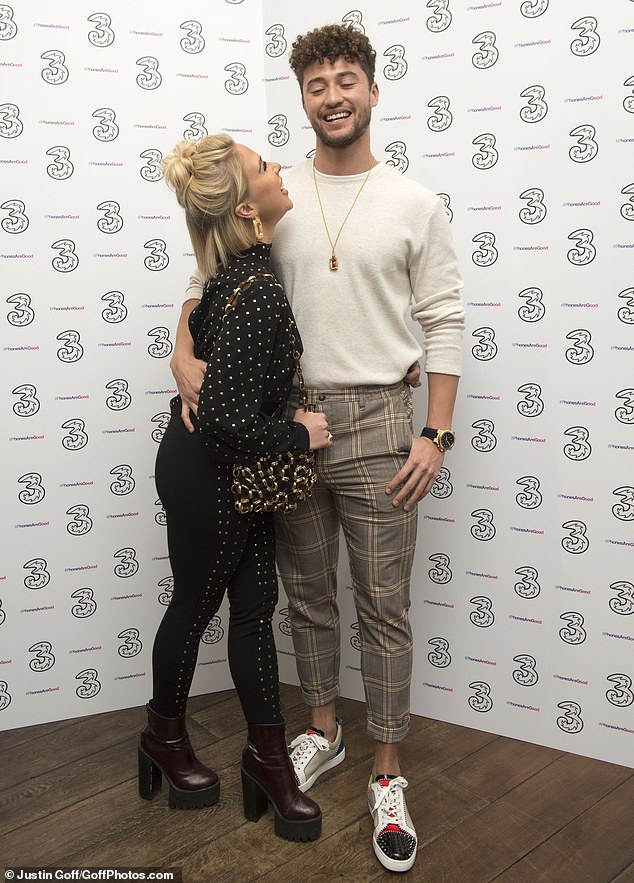 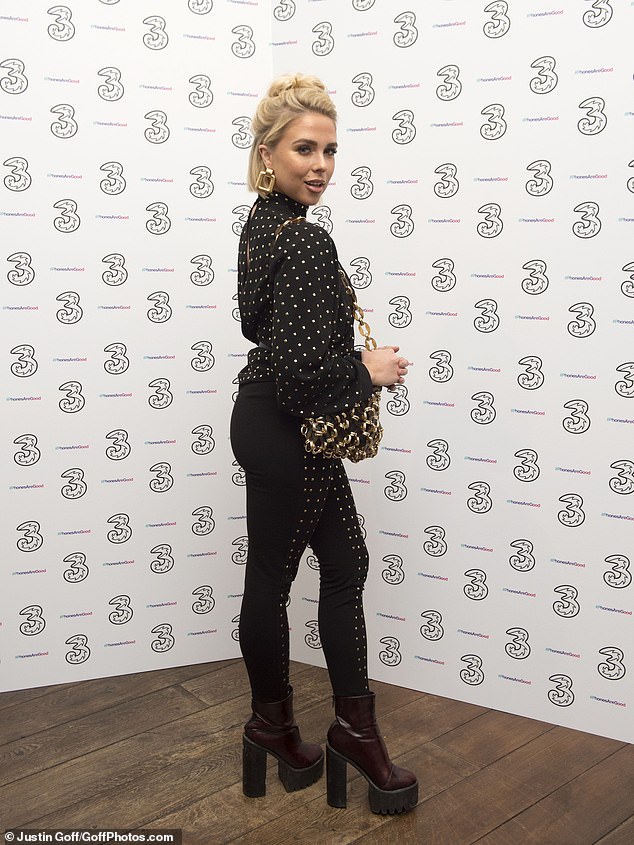 Fellow Love Island alumni Gabby Allen was also in attendance for the evening, showing off her gym-toned physique in a quirky studded black polo neck and matching leggings.

Talking about their blossoming relationship, Rak-Su singer Myles revealed that they’re in the ‘honeymoon period’ and even joked that the personal trainer can’t get rid of him. 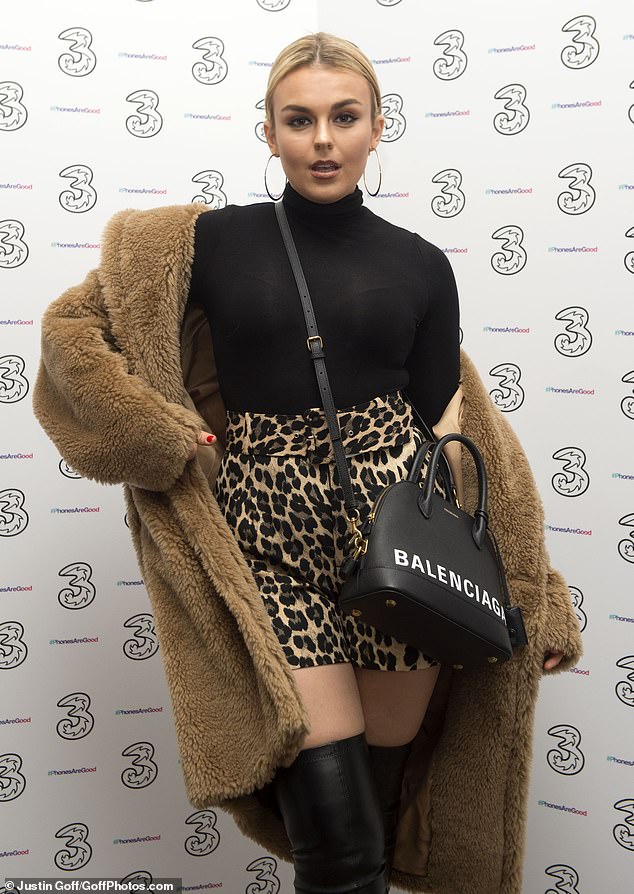 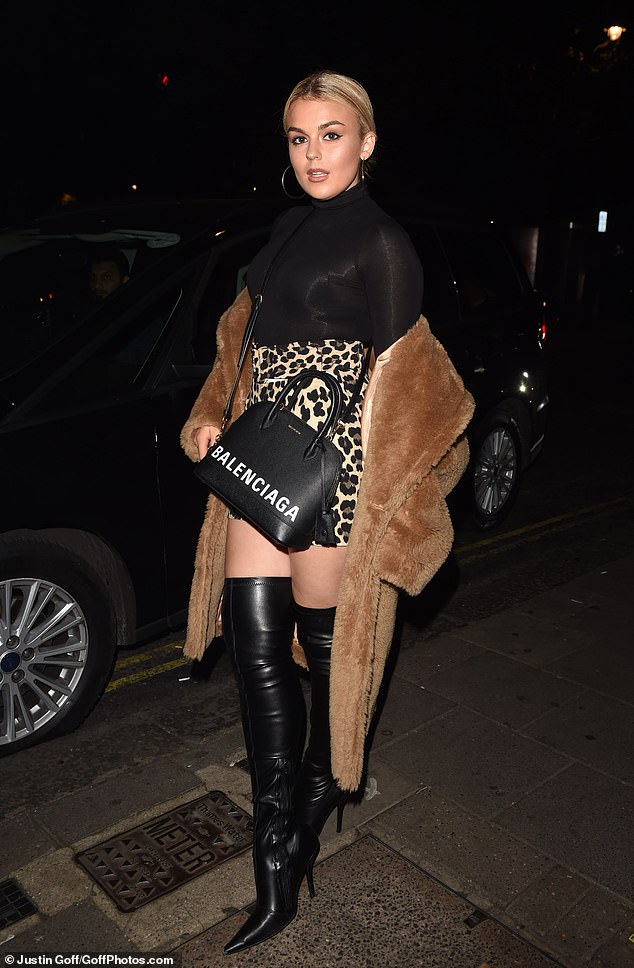 He told the Daily Star: ‘I’ve moved in to hers and have marked my territory.

‘We are loved-up and are in the honeymoon period at the moment so she can’t get rid of me.

‘I’ve got my own wardrobe space and one corner of the room where I’m allowed to put my bag and trainers but I get told off if they spread out of there.’ 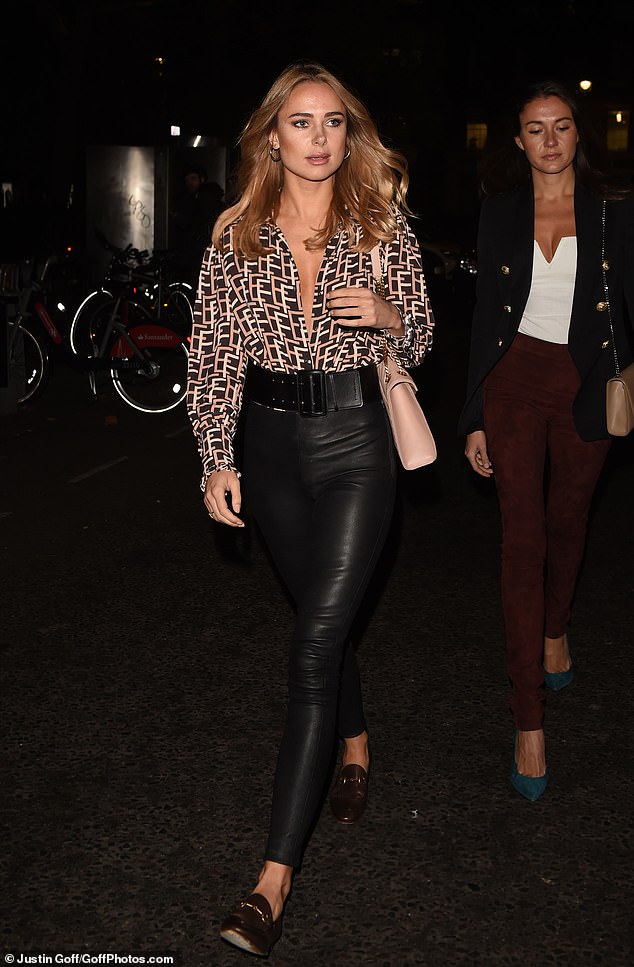 And Kimberley Garner was also showcasing her Chelsea style as she exited the exhibition launch, looking chic in a Fendi-style printed blouse and leather trousers.

The swimsuit entrepreneur had her golden tresses in beachy waves as she chose comfortable brown leather loafers for the trip.

Kimberley recently spoke exclusively to MailOnline about being open to having her future husband be in the public eye, after recently breaking up with an ex she kept predominantly out of the spotlight.

She said: ‘I am single. We broke up for a year and got back together for a few months and broke up again. He’s still lovely and we’re really good friends.

‘It was nice to have a bit of privacy with my ex, but in the future I wouldn’t mind.’ 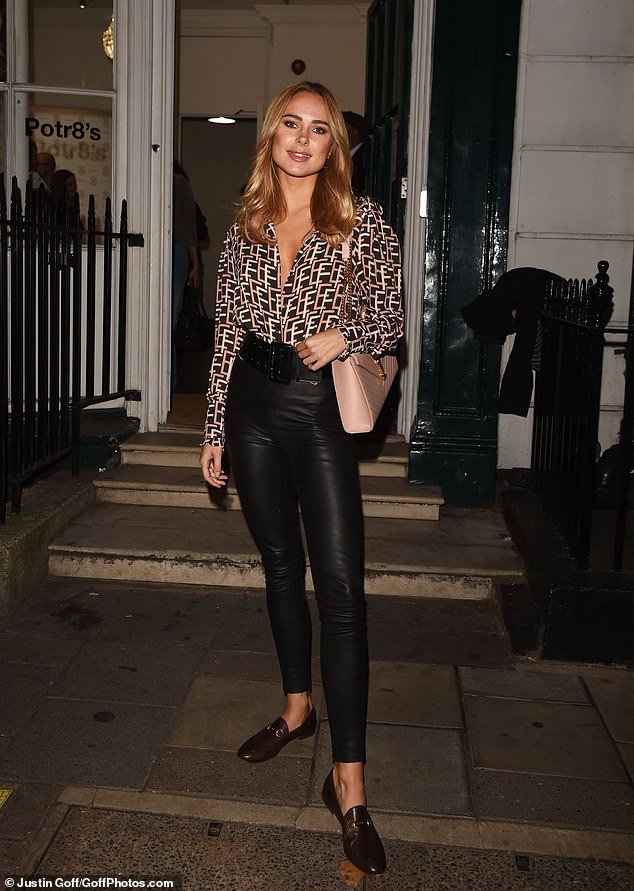