With Black Friday weekend behind us and Christmas Day less than a month away, some people are starting to get into the festive spirit – in a big way.

A teenager in Cardiff has transformed her home into a glowing wonderland to make her disabled mother happy, a pub in Somerset has a 20-foot snowman made of empty bottles, a couple in Hove have strung up 30,000 fairy lights and a family in Essex have raised thousands of pounds for charity with their blinding decorations.

Each Christmas, Jessica Pittard, 18, fills the family home with thousands of decorations, inside and out, to make her mother smile after 50-year-old Michelle was left in a wheelchair.

The Pittard house in Llandaff North, Cardiff, is lit up each year with countless illuminated reindeer, Christmas trees, fairy lights and snowmen. It is so bright it can be seen from miles away, and is the work of 18-year-old Jessica Pittard – all done to put a smile on the face of her disabled mother Michelle, 50. 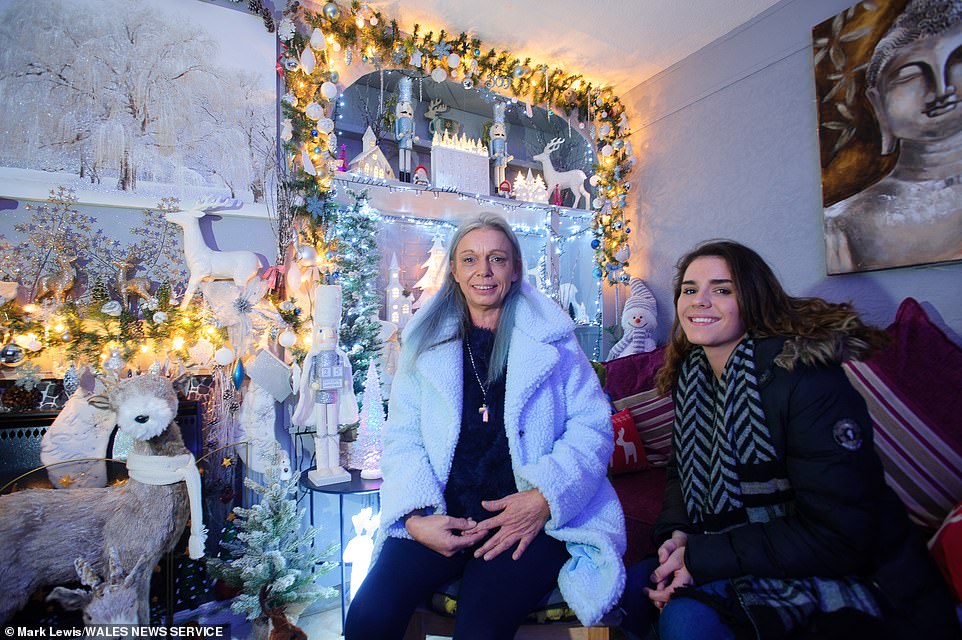 Michelle Prittard, 50, (centre) and her daughter Jessica, 18, pictured in the family home in Wales which becomes a Christmas grotto each December. Jessica said her Christmases as a child were always “ten out of ten” and since her mother’s car crash 12 years ago she has taken over the festive decorative duties

Christmas-loving Michelle is now basking in the glow of dozens of illuminated snowmen, reindeer and Father Christmases.

The over-the-top decorations have become a tradition every year since Michelle was badly injured in a car crash 12 years ago and left in a wheelchair.

Jessica said: ‘When we were young she always made Christmas special… We always had 10 out of 10 Christmas Days.

‘Because she is in pain it is very hard for her. She has a low quality of life.

‘Christmas is one of those things that keep her going. She says she doesn’t know what she would do without it.’

And although Michelle is only able to walk a short distance she still instructs her daughter on where to place the lights. 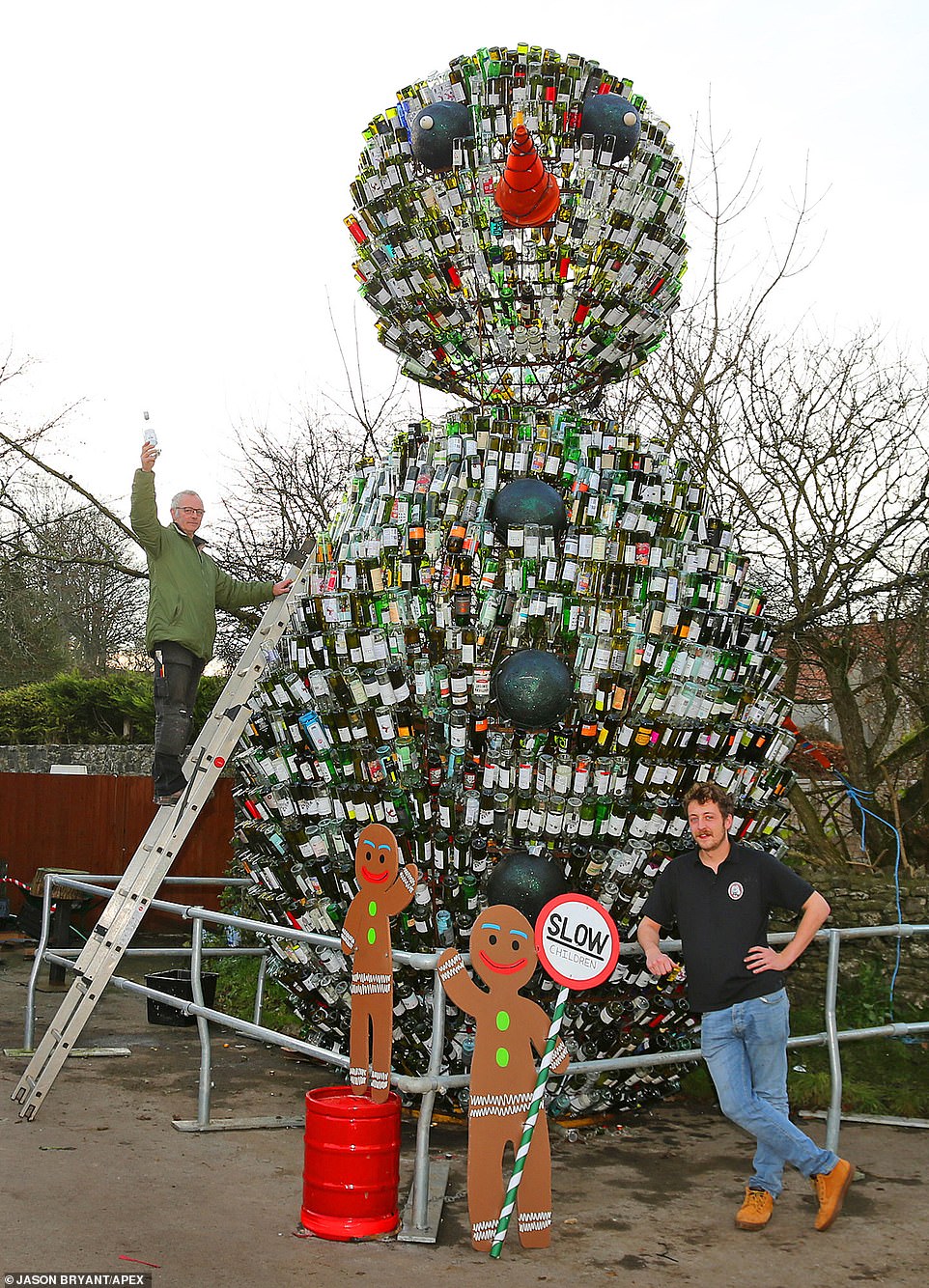 The ‘Snowman’ outside the Queen Victoria Inn in Priddy in Somerset is an engineering marvel made of 2,000 empty wine bottles which stands almost 20 feet tall. It is the brainchild of landlord Mark Walton and pub regular, engineer Ben Selway – who also designed the pub’s spectacular Gingerbread house display. Pictured above: a pub regular salutes the snowman with a bottle while barman Henry Peacock poses with a life-size gingerbread man 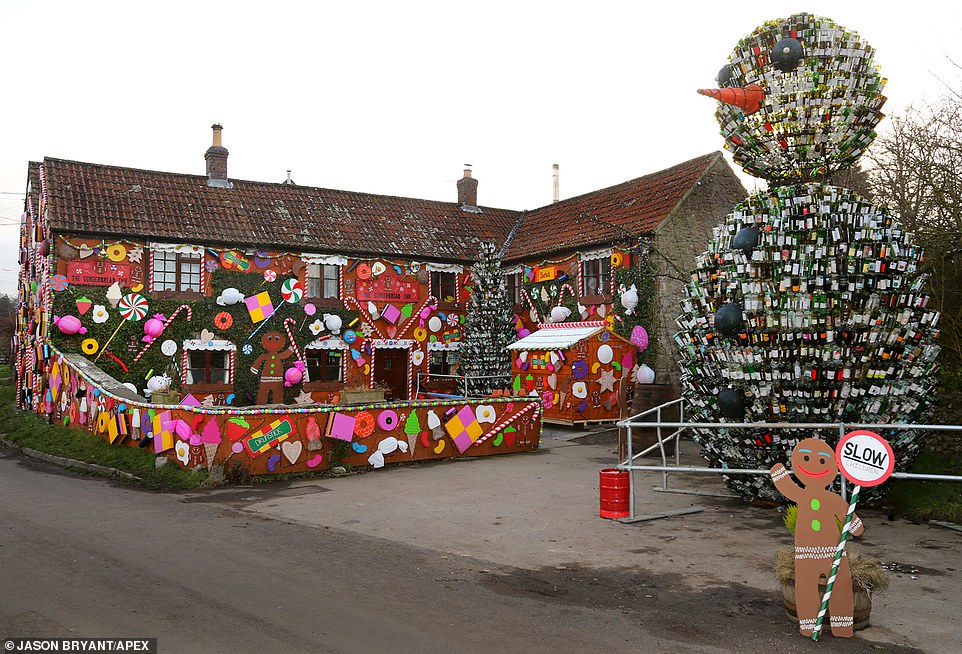 The Queen Victoria Inn in Priddy has transformed into a gingerbread spectacular for this festive season. It took three men and an electrician more than a week to create the snowman

‘My mum is the creative brain behind it all. She is in a wheelchair and she directs it,’ Jessica said.

Jessica, who lives in the suburb of Llandaff North, Cardiff, says the neighbours love it.

She said: ‘We don’t do it for the compliments but I know how happy it makes my mum when people say nice things about it.

‘We had a car slam on the brakes as she was driving past and she shouted at us that we had made her really excited for Christmas.

‘At night you can actually see the house from a few streets away.’

Single mother Michelle said: ‘I love it – I’m so proud of her.Our electricity bills go up a ridiculous amount. We have to save up for it – but it is worth every penny.’ 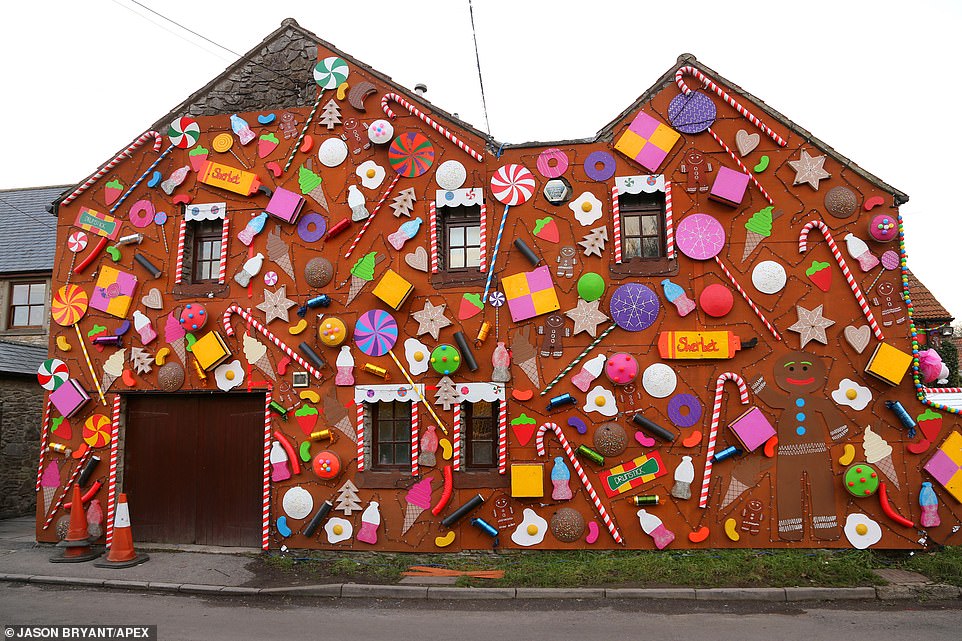 Around the corner from its snowman the Queen Victoria Inn’s walls are festooned with candy canes, gingerbread men, donuts, ice-cream cones… and even a fried egg 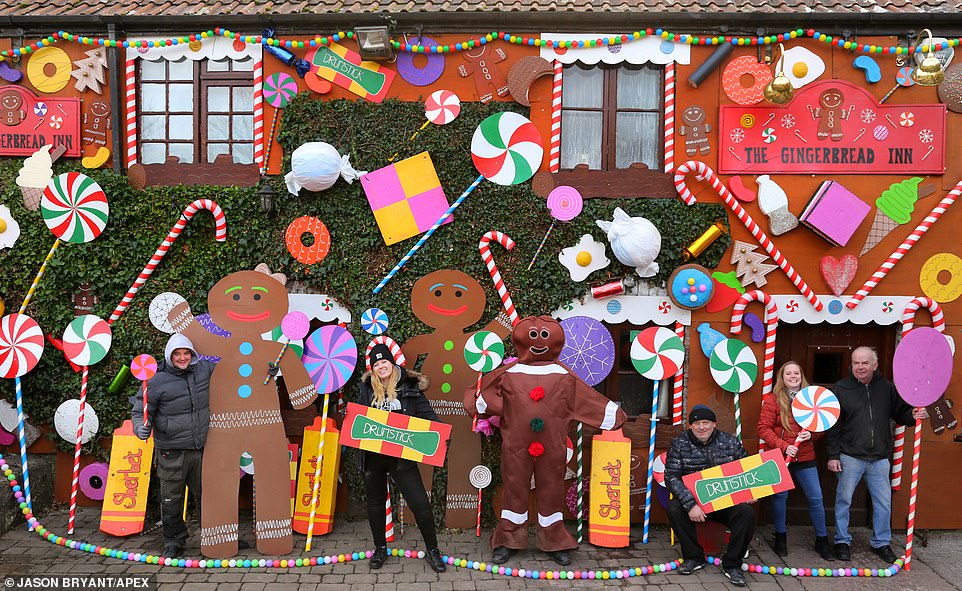 Passers-by pose with three-foot-wide chewy Drumsticks, and seven-foot-tall gingerbread men outside the Queen Victoria – now transformed into The Gingerbread Inn for the festive season 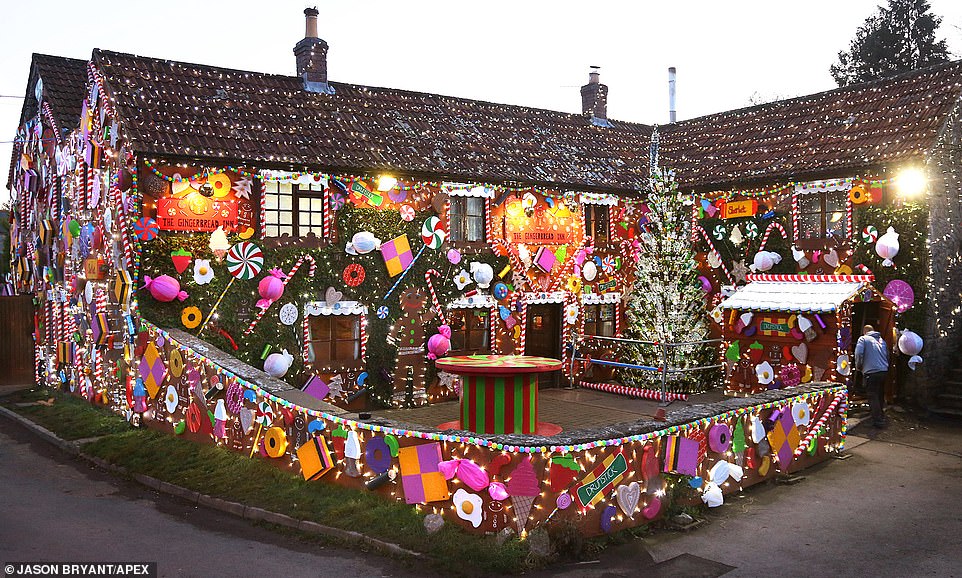 Once the fairy lights are turned on The Queen Victoria – or rather, The Gingerbread Inn – sparkles almost as brightly as the Prittard family home across the Bristol Channel in Cardiff 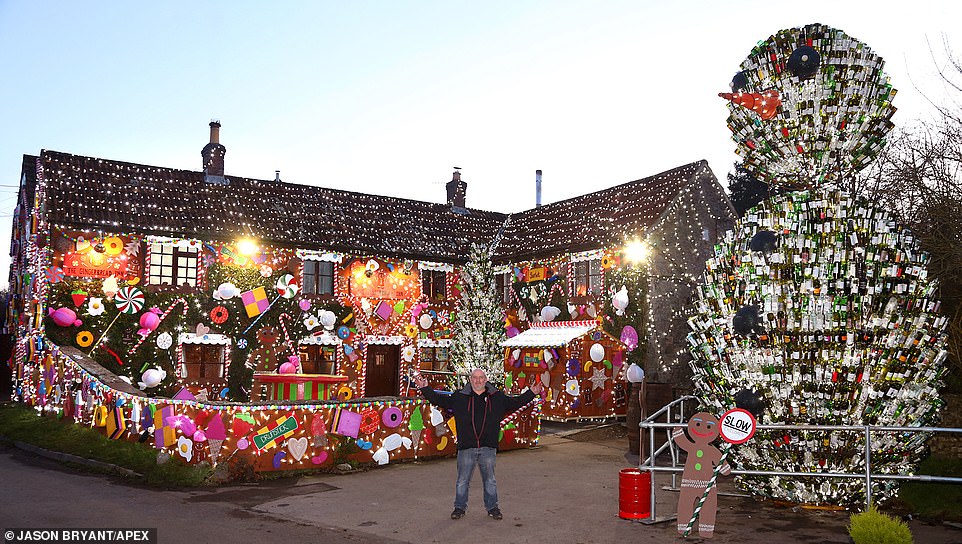 Proud pub landlord Mark Walton greets visitors to the Queen Victoria Inn in Priddy. In previous years he has built a festive bottle tree with 1,100 empties wrapped in almost 1,000ft of fairy lights

Across the Bristol Channel in Somerset, there is another property starting to stand out like a Christmas star – the Queen Victoria Inn, in Priddy.

Visitors to this village inn will get a Christmas welcome with a difference this year, from a giant snowman made from thousands of the pub’s empties.

The massive glass snowman, made from over 2000 wine bottles, was created by landlord Mark Walton and pub regular Ben Selway – who also designed the pub’s spectacular Gingerbread house display.

Mr Walton said: ‘Ben is a very talented engineer and this is the result. It took three people and an electrician well over a week to get it all in place.

‘There’s been lots of responses – lots of people stopping to take a look.’

In previous years the pub installed a 15ft festive bottle tree made from 1,100 glass bottles wrapped in almost a thousand feet of fairy lights.

Weeks ago in early November, one house in East Sussex was already adorned with more than 30,000 twinkling Christmas lights, assorted Santas, snowmen and reindeer, in one of the most dazzling and earliest DIY displays in Britain.

Each year couple Michael and Lyn Farnes transform their home into a winter wonderland to raise money for charity.

And this year baby granddaughters Erica and Poppy are set to join the fun with their ‘Christmas mad’ family. 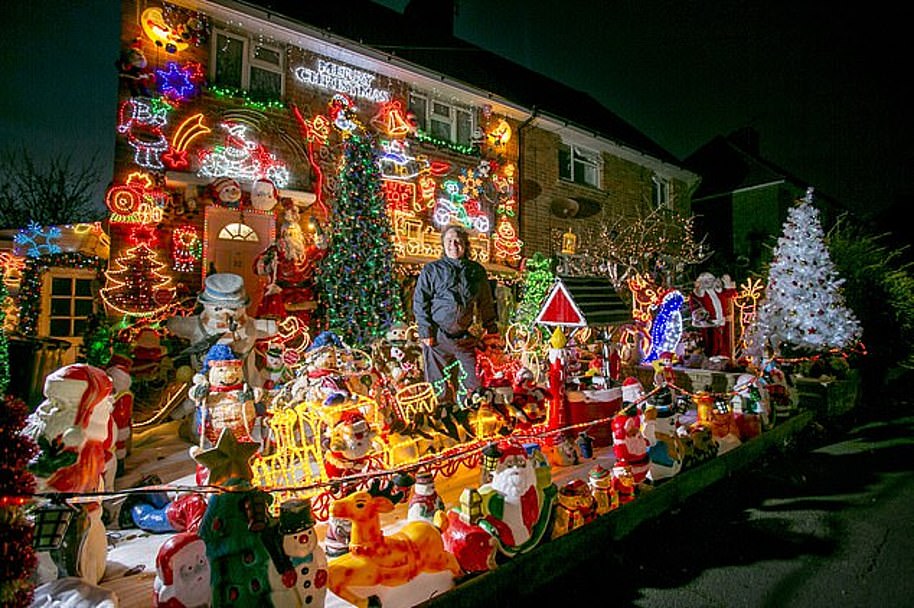 The display at their home in Hove, East Sussex immediately started attracting awestruck children who stop and stare in amazement.

The display takes three days to set up with around 200 metres of electric cable feeding an estimated 30,000 twinkling fairy lights and a multitude of attractions.

Among them are around 25 snowmen, 40 Santas, elves, reindeers, sleighs, penguins, robins, polar bears. There is even a full nativity scene, a huge outsized Father Christmas sculpture and an icy pond. 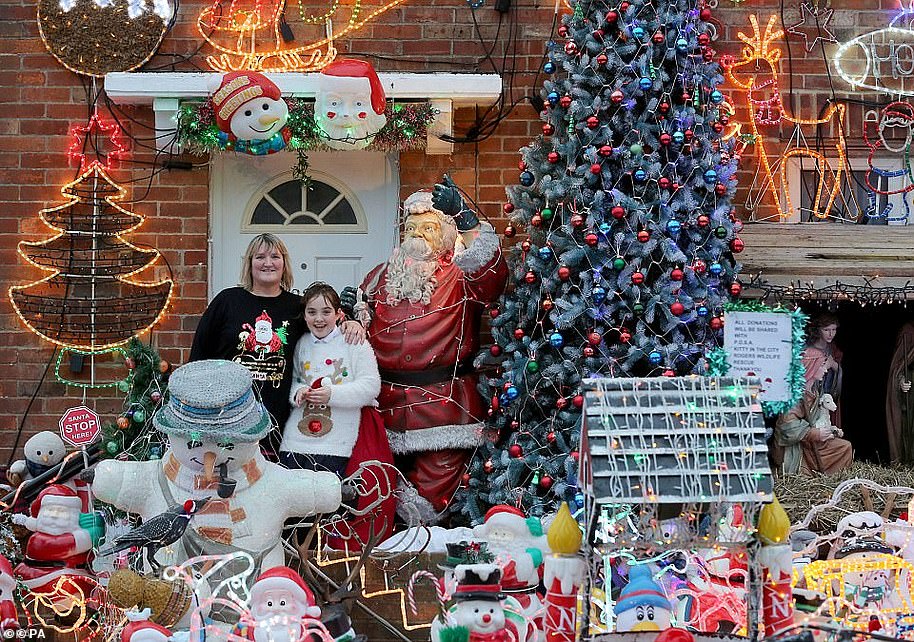 Children come from miles around to visit the house in Amberley Drive where the Christmas scene even includes a huge outsized Father Christmas sculpture and an icy pond. The couple started with just one set of twinkling lights 17 years ago

Mr Farnes, 56, of Hove, said: ‘Every year I buy a few extra things to keep the crowds coming but I’ve only got so much space, ‘It is a lot of work and it costs quite a bit but my wife and I love doing it.

It is a delight to see the faces of the children when they see it all lit up.’ Mr Farnes said: ‘This year is extra special with the arrival of our two granddaughters. They are my little elves.’