A fisherman claims his fearless pitbull terrier sprang into action when he screamed for help after a shark’s teeth sank into his leg, almost severing an artery.

Unhappy to have been disturbed, he said the monster fish drove its teeth into his ankle and punctured an artery when he tried to take the hook from its mouth.

The one-year-old pup, Darby, was in White’s car but managed to escape to defend his owner as he struggled with the ill-tempered fish.

One-year-old puppy, Darby (pictured above), leapt to save his owner when a six-foot shark had bitten deep into his ankle flesh and wouldn’t let go. Darby tried to bite the predator in the gill but this made it only bite down harder. After recollecting himself he went for the fish’s tail and dragged it away 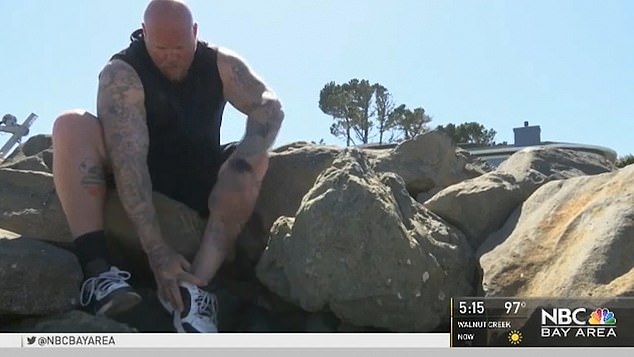 James White had been fishing on the shore of Bodega Bay in California’s Sonoma County when he accidentally hooked a massive shark. As he tried pulling the hook out it flopped and bit 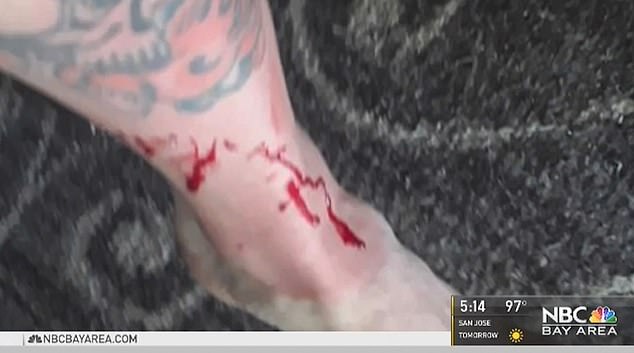 James White, pictured above, was bitten deep on the ankle and an artery was punctured. He said that without Darby, the injury could have been far worse

‘He (Darby) has been a part of the family from day one. Just now a little more,’ White told NBC.

‘If it wasn’t for him I would have been a lot worse.’

White said he accidentally hooked himself on to a 6 foot long Sevengill shark which is considered dangerous to humans if provoked. He said it took ten minutes to reel the beast to shore.

As he tried to unhook the predator, it went for him, sinking its sharp teeth into his ankle.

‘Immediately there was blood everywhere, the first bite punctured an artery,’ White said.

Darby had been in the car when White was attacked but managed to open the door to aid his owner. The pit bull dragged the aggressive shark away by its tail

‘The pressure was intense.’

White screamed hoping another person nearby may come to his aid but he need not have worried.

Although Darby was inside the car, he allegedly opened the door and came to his owner’s aid.

White said the pup bit the predator’s gills but this made it chomp down harder on White’s leg. Darby regrouped and dragged the fish away from his master by biting down on its tail and dragging it away from him.

White said people were hesitant to believe the story at first but finally came round when he showed them photographs of the bite wound.

Mr White said he threw the shark back into the water after the attack.