The LSU gymnastics team is adding an extra layer of security for the rest of the season after a gang of ‘rude’ teenage boys tried to mob Olivia Dunne at an event in Utah.

The 20-year-old has become a social media sensation after posting flirty photos to Instagram and lip-sync videos to TikTok and has amassed a net worth of $2.3 million thanks to her gymnastics and sponsorship deals.

However, the newfound fame and attention led to the college gymnast having to beg fans to be ‘respectful’ after multiple claims of incidents surfaced following the program’s meet against Utah last weekend. 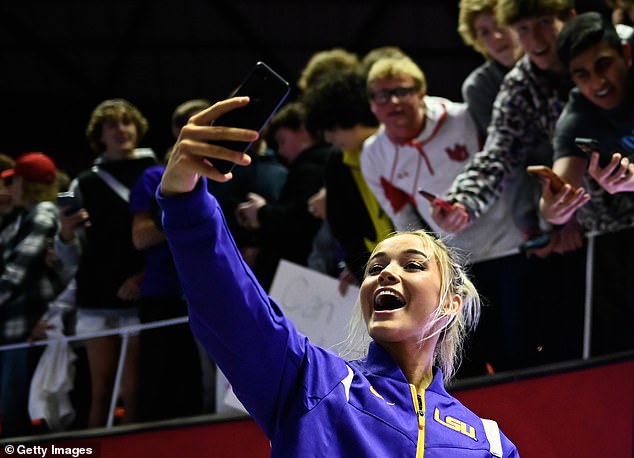 ‘Livvy’ posed with fans after a PAC-12 meet at the Huntsman Center in Salt Lake City, Utah 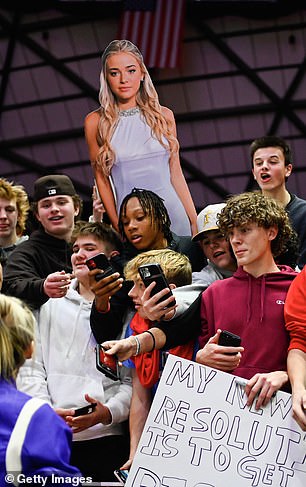 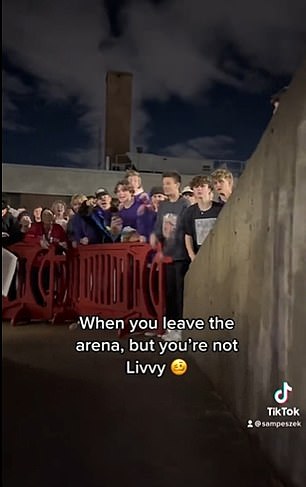 Officials were forced to move the LSU team bus to avoid a huge crowd that had gathered, while police were placed in front to help the athletes get on safely

Coach Jay Clark said Tuesday that a security officer will now travel with the team to competitions for the rest of the season.

‘That person will be in our hotel and outside our locker room and getting us to and from the bus at the venue,’ Clark told The Advocate/Times-Picayune. ‘(The officer) will be there to create a perimeter that keeps everybody safe.’

Clark said he wanted to make sure that fans can seek autographs of the gymnasts but insisted his athlete’s safety had to be a priority.

Gymnasts often interact and mingle with their family and friends between routines but Clark suggested that could change in order to better protect the athletes. 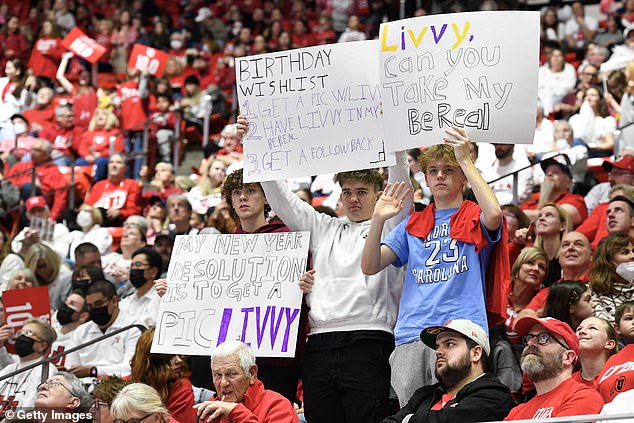 Several fans held up signs begging her for a picture in the stands. The New Jersey-born star is now one of the top earners in collegiate sports 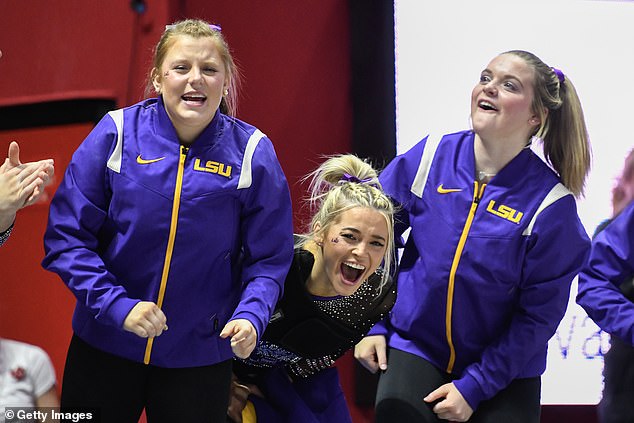 ‘Things have to change. We just can’t expose them,’ Clark added. ‘We’re looking at some policy changes that will give parents access at a different location to their daughters.’

LSU next competes at the University of Kentucky Friday before returning for its home opener on Monday against Oklahoma.

After huge crowds of boys called one of her teammates ‘Livvy 2.0’ and told her ‘you’ll do’ for a photo last weekend, Dunne posted a statement online.

Officials were forced to move the LSU team bus to avoid them, while police were stationed in front to help the athletes get to safety. 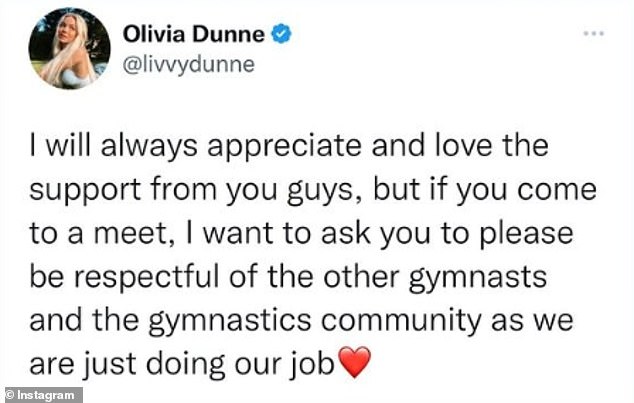 The 20-year-old posted a statement online after mobs of boys called her teammate ‘Livvy 2.0’ before saying ‘you’ll do’ 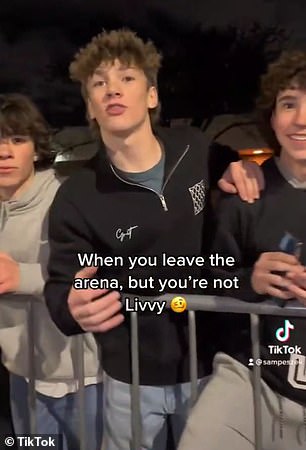 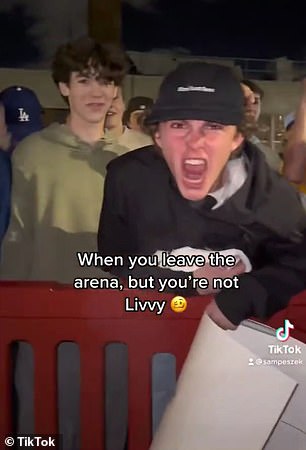 Some even ‘swarmed’ her and her teammates as they tried to leave a recent event, forcing police to have to come and help them get to safety

She said: ‘I will always appreciate and love the support from you guys, but if you come to a meet, I want to ask you to please be respectful of the other gymnasts and the gymnastics community as we are just doing our job.’

Olivia, better known as Livvy, is regarded as one of the most influential college athletes. Her fans showed up to support her in Salt Lake City even though she wasn’t in the line-up.

The mother of a Utah gymnast claimed her daughter was ‘swarmed ‘ by a group of teenage boys.

Jillian Hoffman’s mother, Jennifer, posted online: ‘As we were walking to the car the group swarmed my daughter and her teammate.

It’s been said that officials were forced to move the Louisiana State University (LSU) team bus to avoid the rowdy crowd, while police were also called to help the athletes get to safety 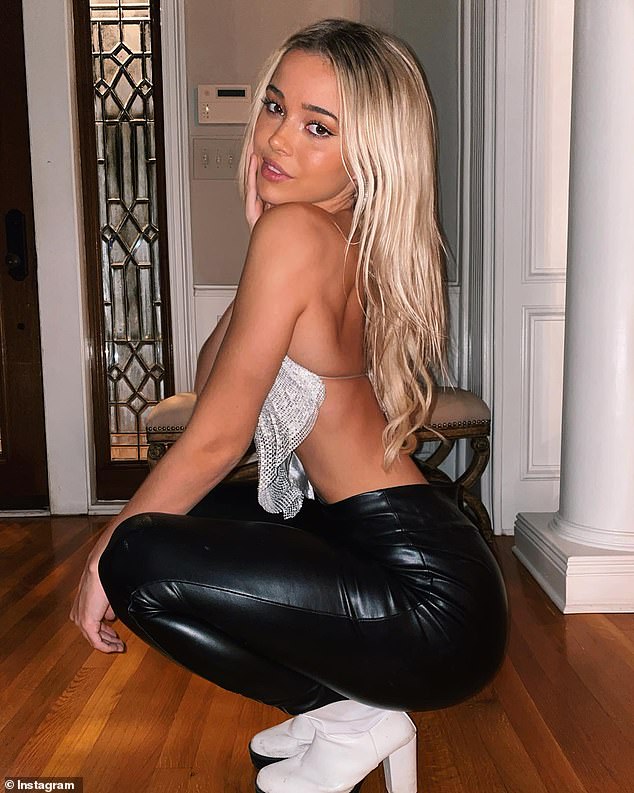 The teenagers reportedly kept asking if Livvy was leaving the Huntsman Center, before chanting her name 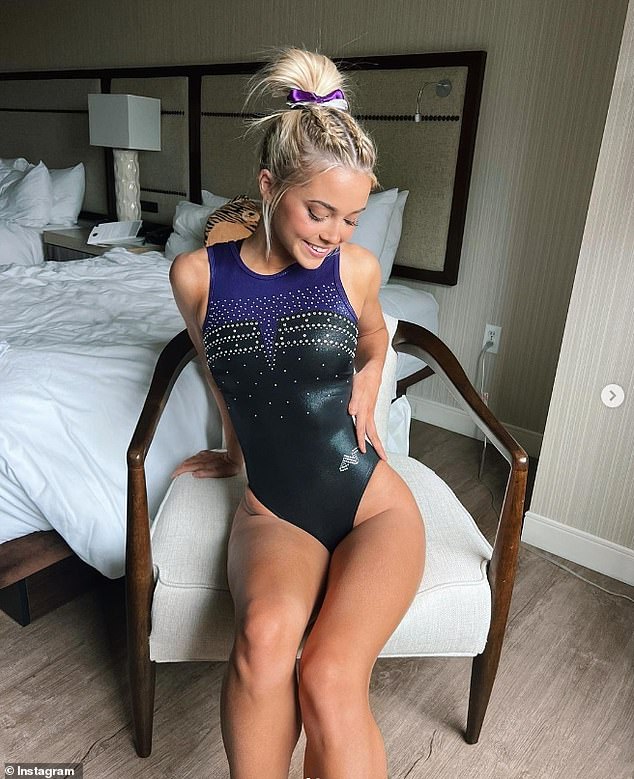 On social media, Dunne begged fans to be ‘respectful’ following the incidents at the meet

‘They literally said to their faces, you are not Livvy but you will do, can we get a picture.

‘The group also called my daughter Livvy 2.0. They were so rude and disrespectful’.

She added her daughter and teammates were not ‘harassed, assaulted or harmed in anyway.’

Other reports claim the team bus was moved so the athletes did not have to run into the group of boys lining the outside of the arena.

The teenagers kept asking if Livvy was leaving the Huntsman Center, before chanting her name.

The New Jersey native first started participating in gymnastics at the age of three – and she is now one of the top earners in collegiate sport with a reported net worth of $2.3 million thanks to her gymnastics, as well as her many lucrative sponsorship deals.

In addition to her success as an athlete, she has also found fame as a well-known star on TikTok, where she regularly documents her her lavish lifestyle with her nearly seven million followers. 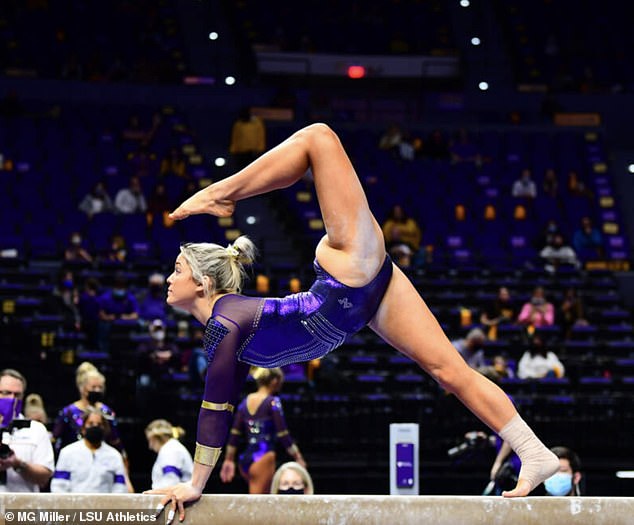 The sports star first started participating in gymnastics at the age of three – and she is now one of the top earners in collegiate sport with a reported net worth of $2.3 million thanks to her gymnastics, as well as her many lucrative sponsorship deals 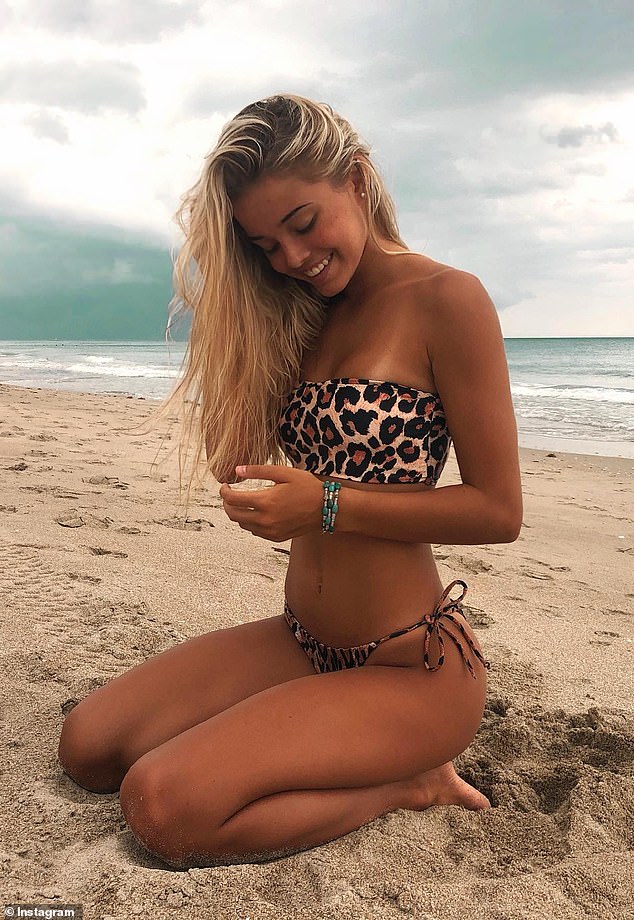 In addition to her success as an athlete, she has also found fame as a well-known star on TikTok , where she regularly documents her her lavish lifestyle with her nearly seven million followers 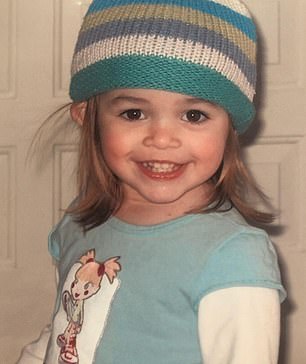 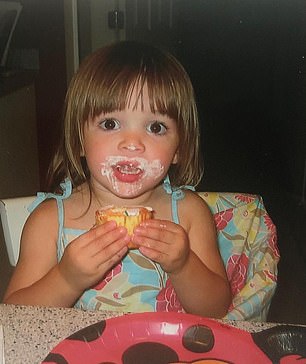 Olivia said on her website that she first got involved in it because she wanted to wear a ‘sparkly pink leotard,’ adding, ‘But, little did I know what an exciting future was ahead of me.’ She is pictured as a child

Dunne is now among several female athletes joining the rank of millionaires through name, image and likeness (NIL) deals.

After college athletes were allowed to enter such deals last years, there has been an upward trend of female athletes showing off candid and flirty posts to secure millions of social media followers that boosts endorsement deals.

Dunne has earned almost $2million-a-year from sponsors and photos on social media.

After years of competition, she made her elite debut at the 2014 American Classic and went on to join the U.S. national gymnastics team three years later.

In 2020, she stepped away from elite gymnastics to compete at the college level at Louisiana State University. 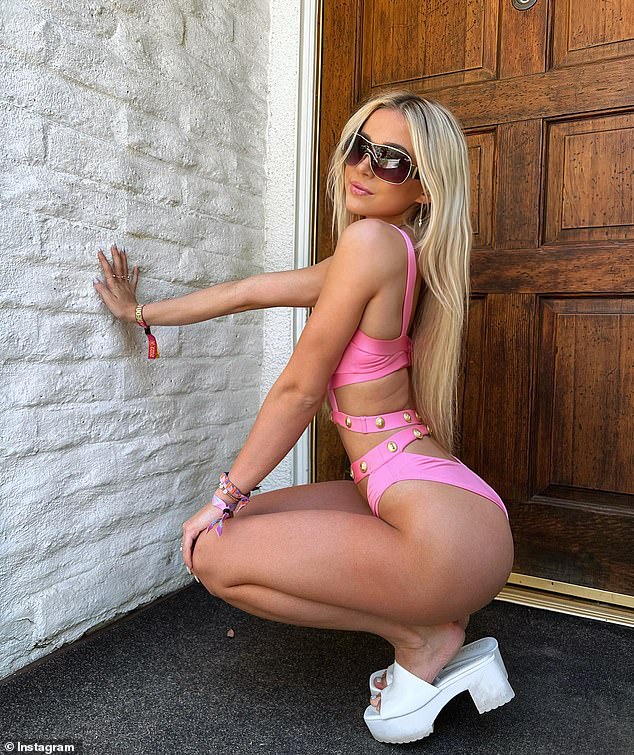 The athlete (seen in 2022) said she was invited to try out for her local gym’s pre-team at age five, and as soon as she started competing, she ‘knew she had a passion for the sport’ 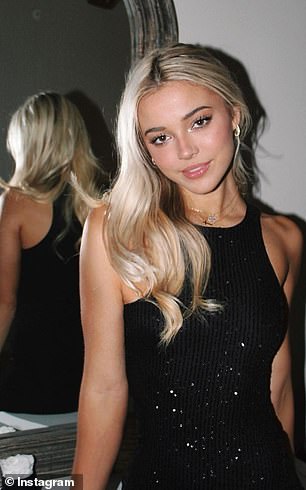 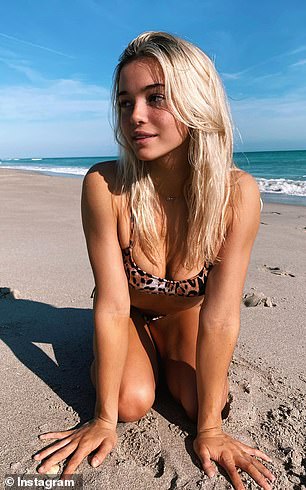 In 2016, Olivia won the Bresteyn’s Elite Qualifier, as well as the KPAC Elite Qualifier. She also competed in the P&G Championships that year, where she earned two medals – on floor and beam. She is seen in 2022

Dunne’s large wealth stems from this rise as an influencer, where she posts sponsored ads on her social media pages flooded with pics of the gymnast showing off her body.

Some of her recent deals have been with American Eagle Outfitters and Vuori activewear.

Dunne grew her social media following by sharing an inside look at her glamorous life as an NCAA gymnast – becoming the most-followed collegiate athlete on the web with more than 2.3 million followers on Instagram and 6.3 million on TikTok.

But she wasn’t inititally allowed to make any money from her internet endeavors, due to the NCAA’s strict policy about its members selling sponsorships.

That is, until June 30, 2021, when the organization changed its rules, announcing that it would allow its athletes to earn a profit off of their name, image, and likeness.

One month later, Olivia signed with Endeavor Talent Agency’s WME Sports, and in September, she announced that she had landed a partnership with activewear brand Vuori – which Forbes reported was worth ‘mid-six figures.’ 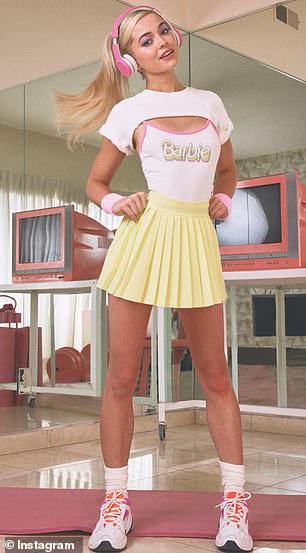 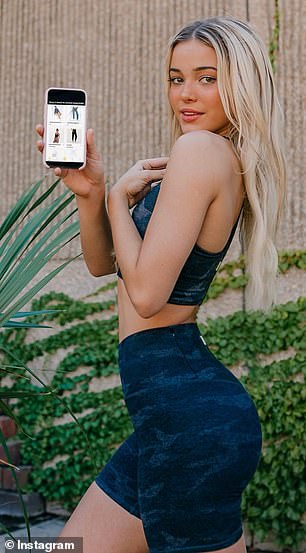 She has since landed sponsorships with clothing companies like American Eagle and Forever 21 (left), as well as the app Nate (right) 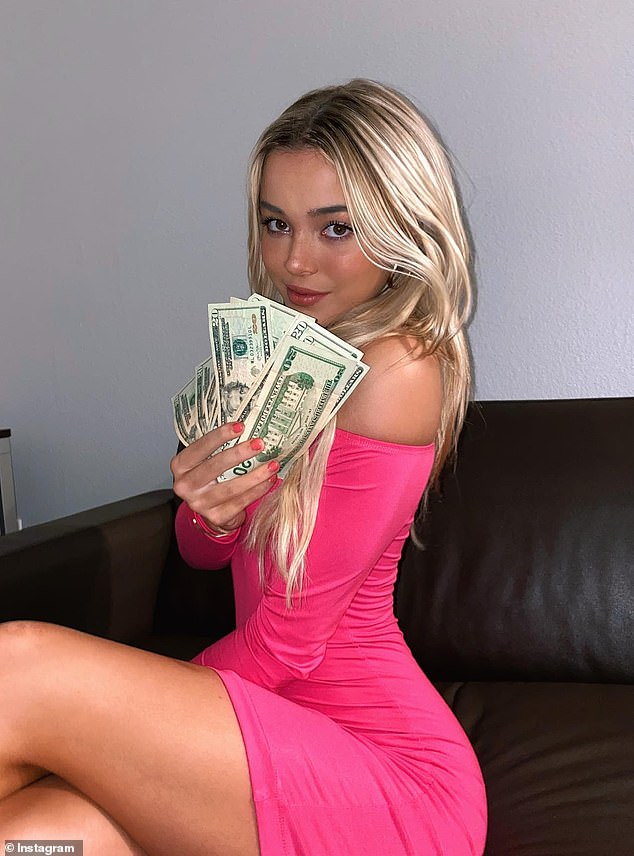 On June 30, 2021, the NCAA announced that it would allow its athletes to earn a profit off of their name, image, and likeness – a move that turned Olivia into a millionaire at only 18 years old

And while she was quickly flooded with opportunities from other companies who wanted to work with her, she told the outlet that she was going to be picky, and only choose ones that were ‘authentic to her.’

However, Stanford University’s Tara VanDerveer, the most successful coach in women’s college basketball, told the New York Times back in November that technological development has allowed for outdated sexist behavior to continue – referencing that the focus of female athlete’s physical appearance is step backward.

Dunne issued a defense of her own in the New York Times article, insisting she was proud of her achievement.

She claimed the social media strategy has allowed her to earn a larger salary than what focusing on sports alone would have gotten her.

‘Seven figures,’ she said. ‘That is something I’m proud of. Especially since I’m a woman in college sports. 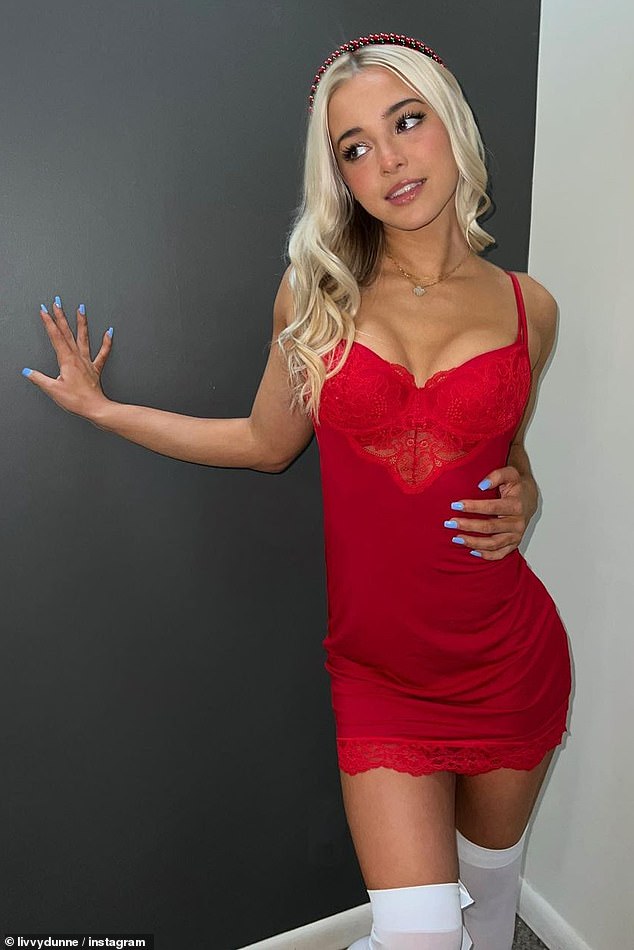 Dunne, now 20, better known as Livvy, originally from New Jersey, has been making waves in the gymnastics world recently 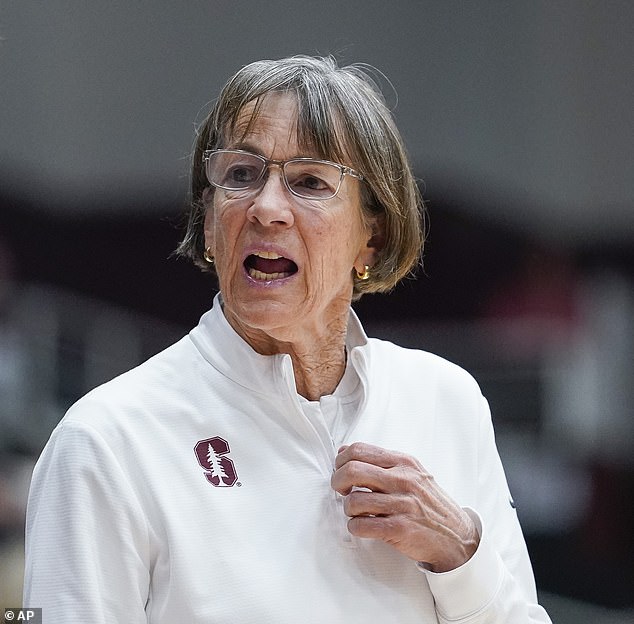 Although the social media tactic has allowed young female athletes to join the rank of millionaires, Stanford coach Tara VanDerveer said the trend was regressive for women in sports

‘There are no professional leagues for most women’s sports after college,’ she added.

However, VanDerveer insisted the social media strategy was a ‘step back’ in her criticism of Dunne.

‘I guess sometimes we have this swinging pendulum, where we maybe take two steps forward, and then we take a step back,’ she said. ‘We’re fighting for all the opportunities to compete, to play, to have resources, to have facilities, to have coaches, and all the things that go with Olympic-caliber athletics.’

After the article was published, Dunne called it ‘too much,’ sharing a screenshot of the article to her Instagram Story, writing, ‘Is this too much?’ and tagging the outlet.

When asked about her online persona by the outlet, she explained that each person is entitled to ‘show as much or as little’ of themselves on the internet as ‘they want.’

Her mother, Katherine Dunne, also addressed rumors that ‘the way Livvy dresses’ means she ‘deserves’ to be treated with disrespect by her fans.