‘I need to enjoy this and give my best’: Tottenham forward Lucas Moura says Champions League semi-final against Ajax is the biggest game of his career

Lucas could lead the line against the Dutch side on Tuesday evening, with Harry Kane and Son Heung-Min both unavailable.

Despite the magnitude of the game both for the team and him personally, Lucas has vowed to enjoy the fixture as Spurs play a first European semi final in 57 years.

Asked at Monday’s press conference is this is the biggest game of his career, Lucas said: ‘Yes, I can say that.

‘It is my first Champions League semi, it is a big moment for me, and a dream to play in this competition. I need to enjoy this and give it my best.’

The absence of Kane and Son has raised questions as to who will lead the line for Spurs – Fernando Llorente may be deployed as a target man, while Vincent Janssen has recently returned from the cold in cameo appearances.

Lucas, usually a winger, has been deployed as a central striker at times this season – but says he does not regard himself as Spurs’ No 9 in the absence of Kane. 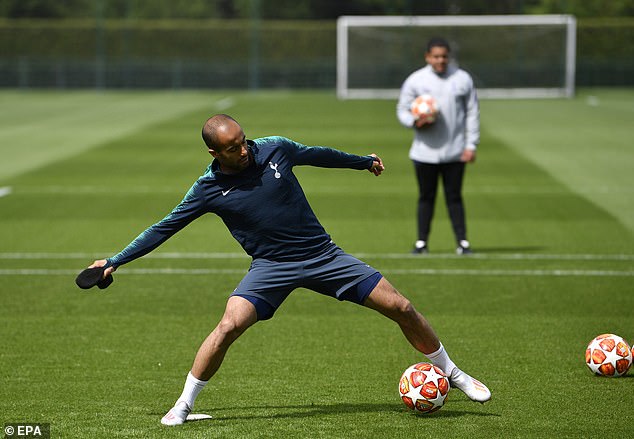 Asked who will score Spurs’ goals, Lucas said: ‘I don’t care, I just hope we win. The most important is that we work together and give the ball to player in best position to score. We need to play like a family.’

Lucas admitted the absence of South Korean star Son is a blow, but that his team mates are ready to step up.

He said: ‘Son is a very good player, very important for us, of course we will miss him, but we have other players who can do a good job, we have a good squad, we are ready to give our best.

‘We cannot count on every player in every game, this is an opportunity for the other members of the squad to show.’