Lucas Vazquez has not forgotten his first encounter with Mo Salah. The Real Madrid winger came out on top but only just.

Salah faced Madrid in the last-16 of the Champions League in 2016 when he was still at Roma.

‘He was brilliant at the Bernabeu,’ says Vazquez. ‘He was so fast, he got away from defenders and he had chances that he was not able to take. That was what was missing from his game. The goals. 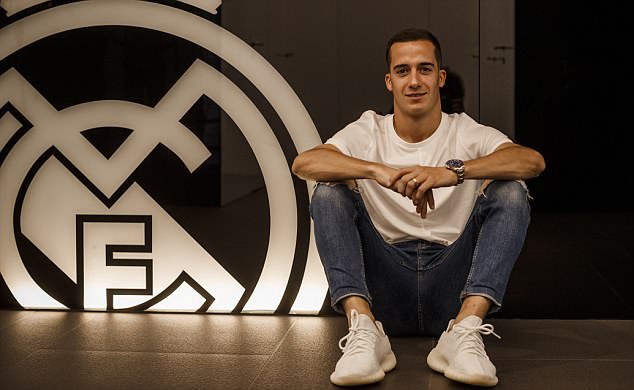 ‘This year he has exploded in terms of his scoring. He is having a spectacular season.’

It was Vazquez who made Roma pay for their failure to finish two years ago. He came on in the second half and within three minutes had skipped around full-back Lucas Digne and crossed for Cristiano Ronaldo to score as Madrid went through.

‘We know how to suffer. That’s part of the reason we are in the final,’ he says sat in the players’ lounge at the club’s Valdebebas training complex with a picture of his manager Zinedine Zidane just visible just over his right shoulder.

It’s the volley at Hampden Park in 2002 that won Real Madrid their ninth European Cup.

‘When Zidane talks to you, you know you are being spoken to by one of the greatest players in the history of the game,’ Vazquez says. ‘He has been there and done it. You never stop learning from him.’

Zidane likes Vazquez because he listens and delivers what is requested. Ronaldo has a special bond with him too, he thrives on his crosses as he did that night against Salah’s Roma. And he gleefully buries all the spot-kicks he wins. 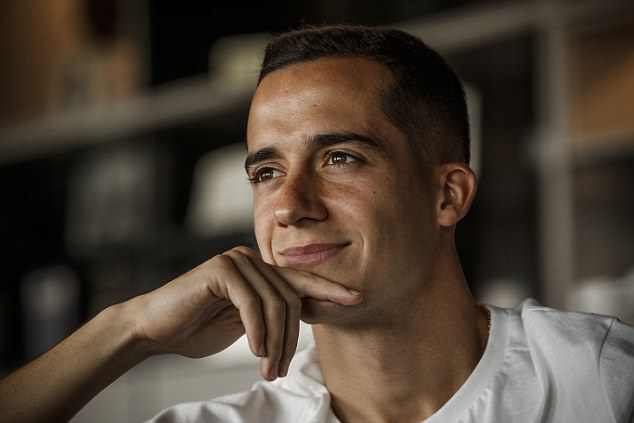 Vazquez has won more penalties for Ronaldo to score than anyone else in the squad over the last three seasons. None more important than the one Michael Oliver gave against Juventus in the last minute of the quarter-finals.

‘When you see a player who has five Balon d’Or awards run and press as he does then that makes the rest of us run until we drop too.’

There is no complacency in this group of players. They know they will need all of that commitment to see off Jurgen Klopp’s team.

Vazquez has seen enough of Liverpool this season to not be surprised they are in the final ahead of Manchester City who many in Spain expected to reach Ukraine.

‘I knew they would be able to hurt City in the quarter-final. And that was how it was in both legs. They were the better team.’ 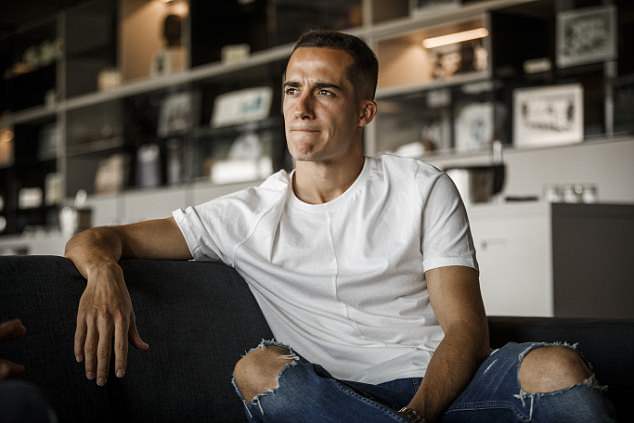 He knows about both Trent Alexander-Arnold and Andrew Robertson: ‘Two young very strong full-backs who get forward well.’ And the word he uses to describe midfielders James Milner and Jordan Henderson – ‘importantisimo’ – needs no translation.

And then there’s the other two-thirds of Liverpool’s attack Sadio Mane and Roberto Firmino: ‘They understand each other so well,’ he says. ‘They are brutal on the counter-attack. They link up with the rest of the team and we are going to have to be very careful with them.’

But respect doesn’t equate to a lack of confidence or a fear of what is coming Real Madrid’s way.

‘Big nerves are for when you are 15-year-old and you go for a make-or-break trial at Real Madrid,’ he says referring to his own experience as a hopeful youngster leaving Galicia for the Spanish capital.

‘That’s when you have the biggest life change possible at stake. I came from playing in a team with my mates to having the chance to play for Real Madrid.’

He has taken that opportunity. He grew up wanting to be Luis Figo and now he has surpassed him in Champions League medals won.

He’s seen both extremes of a European Cup winning nights too – he’s been one of the heroes and one of the extras. 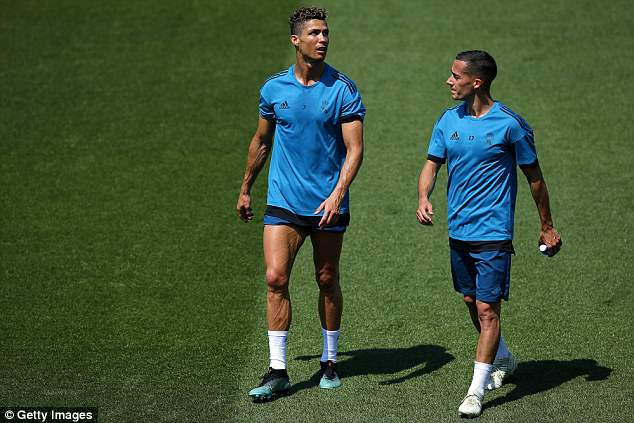 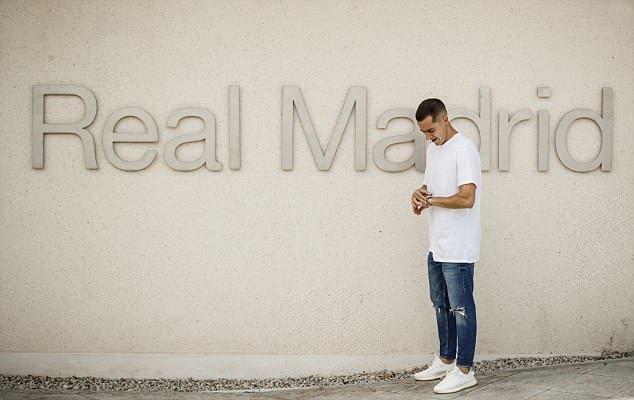 In 2016 when Real Madrid beat Salah’s Roma 2-0 and went through to the quarter-finals Marca slammed their performance lamenting: ‘If Salah had footballer’s feet instead of sprinter’s feet it would have been a very different story’, but they got to the final that year.

And Vazquez scored the first penalty in the shoot-out that decided the game, nonchalantly spinning the ball on his forefinger as he strolled to the spot.

A year later he played his part in the team reaching a second successive final but when Zidane had to trim his squad on the day of the game it was Vazquez who was told to suit-up and watch from the stands.

What is it like to not even have the hope you might be involved at some point?

‘You have to think about the group,’ he says. ‘If the team wins we all win. So you stick together in that moment. I did not go up to my seat in the stand until the last of my team-mates had gone out into the tunnel.

‘Everyone wants to play the final, of course they do, but if you’re out, then your role is to support your team-mates and not wallow or be angry with your head down.’

He will not be in the stands in Kiev for this third straight final. He has been too important too often this season.

He replaced Gareth Bale at half time against Juventus in the quarter-finals. He played half an hour of the first leg against Bayern Munich in the semi-final at full-back because Dani Carvajal was injured.

And did the same in the 90 minutes at the Bernabeu in the same position. ‘I am not used to playing there and [Franck] Ribery was a difficult rival but Luka Modric played a great game helping me.’ 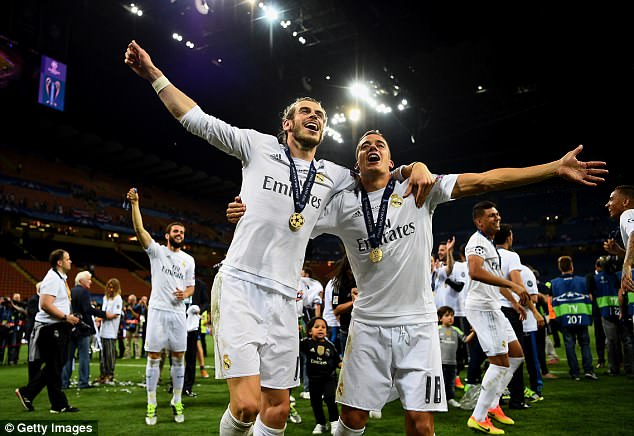 He’s ready for Liverpool. He knows their players and he knows their history too. ‘The final against Milan,’ He grins. ‘I was 14 at the time. I watched it at home and it was incredible. I was backing Liverpool because they had Xabi Alonso and Luis Garcia.’

So he wont be celebrating at half-time if his team are 3-0 up as Milan were in Istanbul? ‘Of course not! Knowing what happened before. You can be sure of that.’

Everyone is expecting a crazy game on Saturday, that will suit Madrid just fine, will it not?

‘I think if it’s a crazy game we can handle ourselves in that situation,’ he laughs. ‘But we can win a more controlled match too. We have that adaptability.’

They know how to do this. They know what’s required over 90, 120 or however many minutes it takes.

And they know the ecstasy that comes when the game, and the trophy, is won.

‘Nobody can take it away from you,’ says Vazquez. ‘The sense of satisfaction is incredible.

‘Then you don’t sleep for 20 hours but you don’t want to and you can’t anyway. It’s all part of winning the Champions League.’