Lucy Hale went with a relatively daring look for her early morning appearance on Live With Kelly and Ryan in New York City to promote her show Ragdoll.

The 32-year-old actress opted for edge as she sauntered into the studio wearing a catsuit and mini skirt with a sweeping leather trench coat.

‘Just a casual morning look for you guys,’ she joked to Ryan Seacrest and guest co-host Ali Wentworth on Wednesday.

Good morning! Lucy Hale, 32, opted for a daring look for her appearance on Live With Kelly and Ryan on Wednesday as she continues to do press for her new AMC+ series, Ragdoll

While on the show she talked about her connection to the late singer Elvis Presley.

‘I love Elvis, I am from Memphis, Tennessee, I am proud of it, my family is all there,’ began the brunette beauty. ‘I named my dog after Elvis, I have Elvis tattooed on my body: it is in honor of my dog, who is named after Elvis.’

She then shared a personal story. ‘My grandma worked in the accounting building where Elvis’ business manager had an office and, according to her, Elvis kissed her on her cheek once… good for her.’

The Pretty Little Liars star wore a galactic bodysuit with a fringe mini skirt and a pair of black stilettos with a silver heel.

She capped off the look with a sweeping faux leather trench coat fashioned by Jason Wu, and wore her choppy brown locks down with a soft red lip.

Nodding to her very edgy look for the early morning appearance, she re-posted a clip greeting the hosts and wrote, ‘Nothing says morning like a full bodysuit.’

Hale has been doing publicity for her new thriller series for AMC+, Ragdoll, this week in NYC ahead of its November 11 premiere.

Daytime look? The Pretty Little Liars star wore a full bodysuit that was adorned with a geometric pattern which covered the entirety of her body as well as some of her black stiletto heels 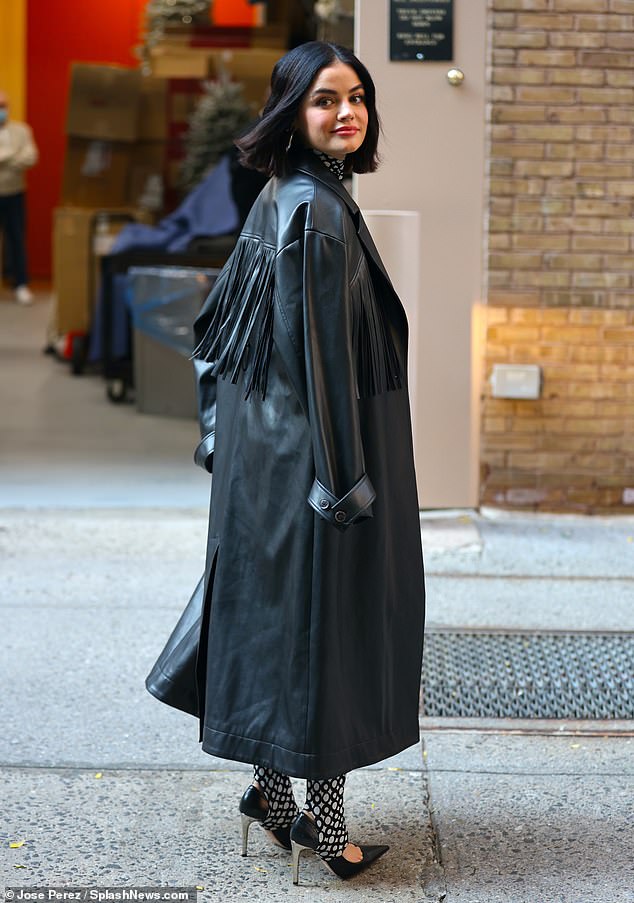 Making an entrance: The edgy morning show look was capped off with a faux leather trench coat fashioned by Jason Wu

The drama is based on the novel by Daniel Cole and the project comes from the minds behind Killing Eve.

During a November 9 Good Morning America appearance she divulged that it was ‘dark’ and ‘pretty disturbing,’ but that’s what drew her to the project as she loves true crime.

‘The show is different. It’s dark. There should be a disclaimer. It’s pretty disturbing, but I’m into that…I’m into the darker side of things.’

The synopsis for the series reads: ‘Detectives attempt to solve the murders of six people, whose bodies have been dismembered and sewn into the shape of one grotesque body – nicknamed the Ragdoll.’ 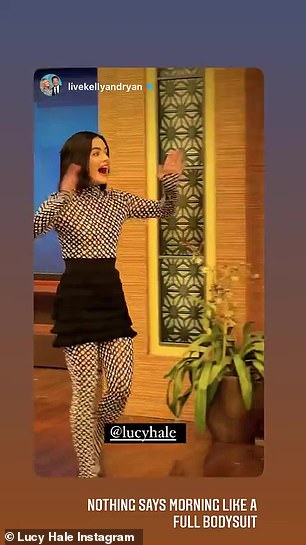 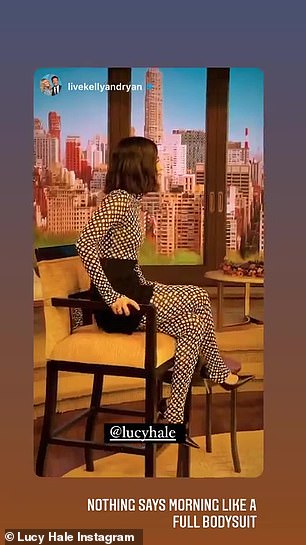 Setting the tone: ‘Nothing says morning like a full bodysuit’ she joked of her look for the daytime talk show 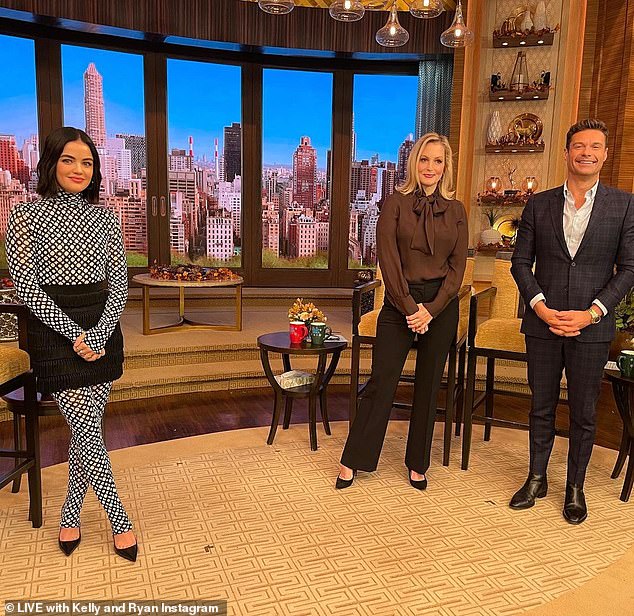 Rise and shine: The popular daytime talk show shared a photo of Lucy post appearance as she posed opposite Ryan Seacrest and guest co-host Ali Wentworth (filling in for Kelly Ripa) on Wednesday 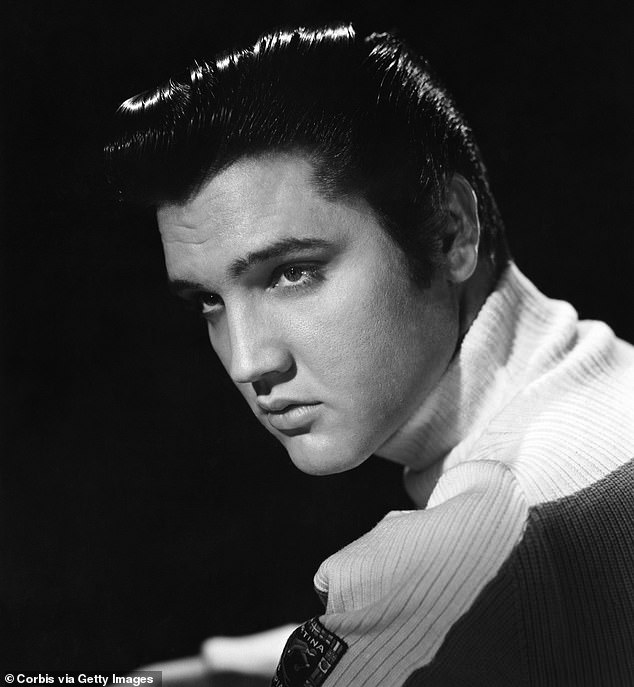 The King: While on the show she talked about her connection to the late singer Elvis Presley. ‘My grandma worked in the accounting building where Elvis’ business manager had an office and, according to her, Elvis kissed her on her cheek once… good for her,’ she said

Speaking to Entertainment Weekly, Hale said she had ‘to fight for’ her role as it was very ‘different’ from her resume of past projects.

‘If I’m being honest, I didn’t think I had a shot at it because this is really different for me. But I knew that I could do it. I had to fight for it. It’s just been such a nice challenge doing something super different.

‘I feel like I’ve been preparing my whole life for this role because I love true crime. ‘I’ve always wanted to be a part of a show like this because this is the genre I gravitate towards naturally..And this show is right on the money for what true crime people are into.’ 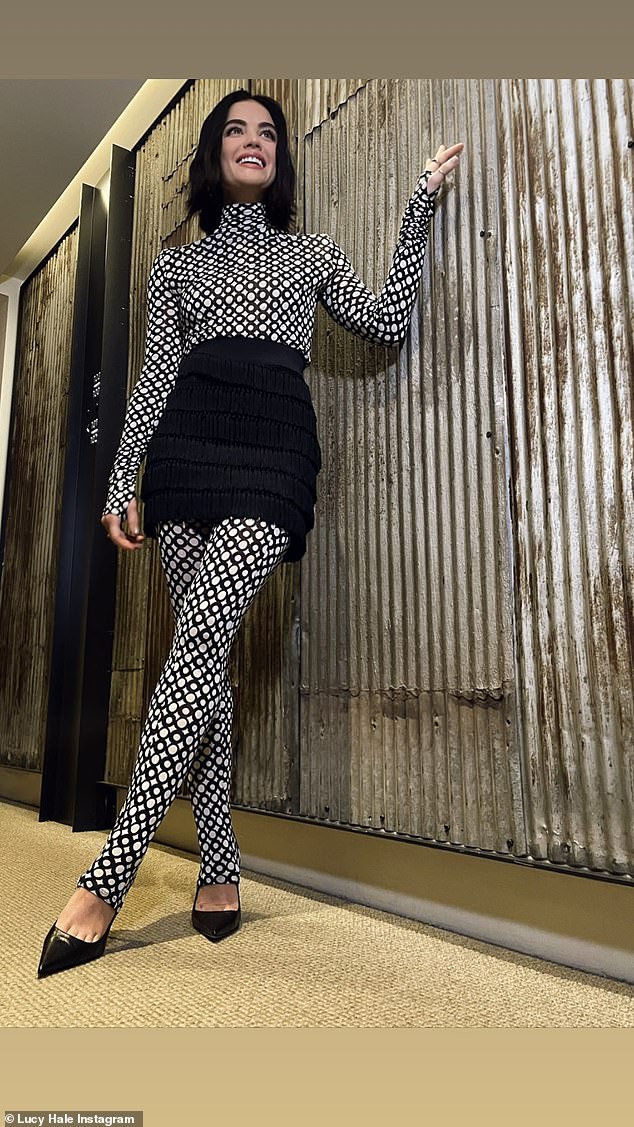 Upcoming project: Speaking to Entertainment Weekly , Hale said she had ‘to fight for’ her role in Ragdoll (which airs November 11) as it was much darker than past projects, but as a true crime aficionado she was drawn to the genre naturally