A Lufthansa passenger jet that was hijacked to Somalia 40 years ago at the height of a far-left militant group’s campaign against West German authorities has returned home.

The Boeing 737 arrived Saturday in the German city of Friedrichshafen, where it will be reassembled and displayed at the Dornier Museum.

The parts arrived aboard two freight aircraft from Brazil. The aircraft ended up in a Brazilian carrier’s fleet and had been sitting decommissioned at the country’s Fortaleza Airport for years.

The Boeing 737-200, which had been hijacked in October 1977 by members of the far-left Red Army Faction returned to Germany on board a massive Antonov An-124 transport jet after spending a decade rotting in Brazil 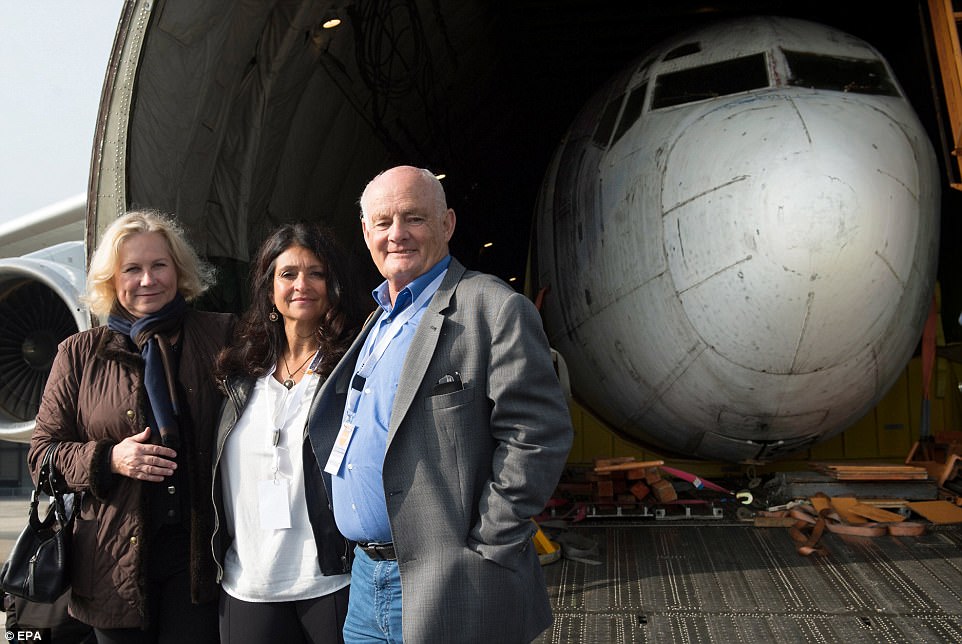 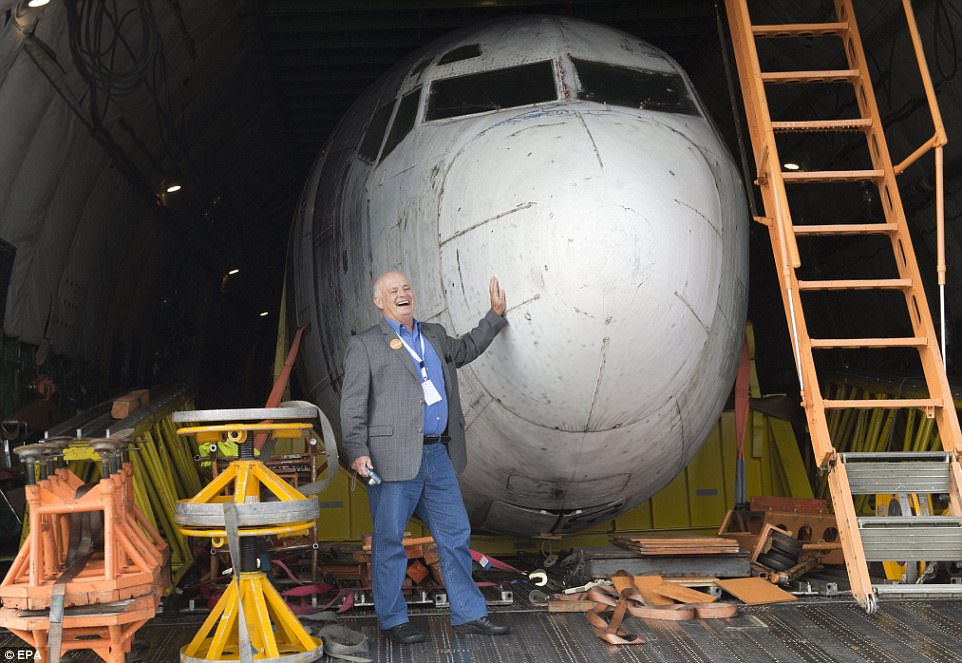 Mr Vietor’s commander in October 1977 Jürgen Schumann was murdered in the southern Yemen city of  Aden during one of seven fuel stops from Germany to the final destination in Mogadishu, Somalia, where police raided the aircraft 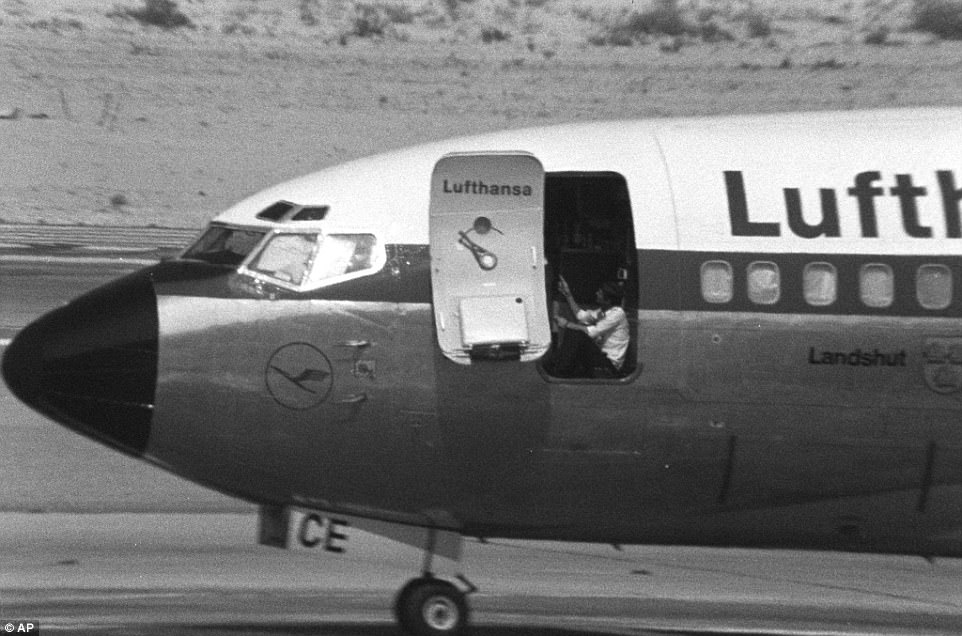 Jürgen Shumann, pictured here being held at gun point on board the Landshut on October 15, 1977 in Dubai, was later killed

A Palestinian group demanding the release of members of West Germany’s Red Army Faction hijacked a Mallorca-to-Frankfurt flight in October 1977. The hijacking marked the peak of the ‘German Autumn’ of leftist violence.

German commandos stormed the plane in Mogadishu, Somalia, on October 18, 1977. They killed three of the four hijackers and rescued all 86 passengers.

The jet, named Landshut, was returned to Germany on board a massive Russian Antonov AN-124 transport aircraft.

Forty years ago next month, German anti-terror commandos stormed a Lufthansa jet in Somalia, shot its Palestinian hijackers and freed 90 hostages, a climax in a bloody era of far-left militancy.

The 1977 Mogadishu raid became a symbol of the ‘German Autumn’ when the state was at war with the ‘urban guerrillas’ of the Red Army Faction (RAF), also known as the Baader-Meinhof gang, and their international allies.

On Saturday, the old Boeing 737 ‘Landshut’, having quietly rusted away in Brazil for almost a decade, finally came home, destined to serve as a memorial to that turbulent era.

Broken up into its fuselage and wings, it was flown aboard two giant Russian transport planes from Fortaleza via Cape Verde to the southern German city of Friedrichshafen, where it was greeted by large crowds.

Aribert Martin, who was part of the GSG-9 special forces unit which stormed the aircraft said: ‘It’s great that the Landshut is back. It would have been strange to let it fade from memory.’

Foreign Minister Sigmar Gabriel, whose ministry bought the gutted plane for £20,000, has called it ‘a living symbol of a free society that refuses to give in to fear and terror’. 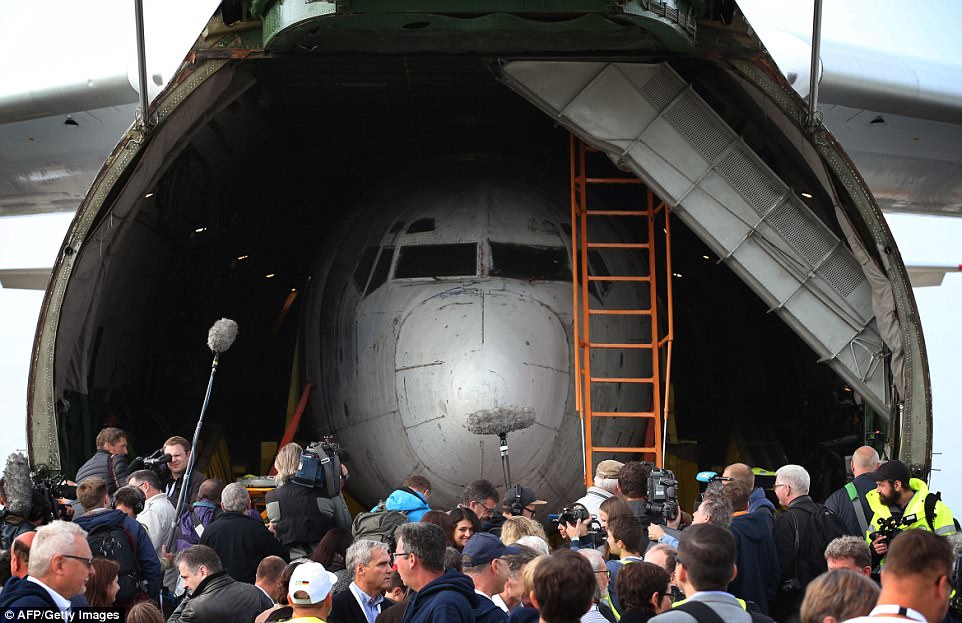 German special forces raided the aircraft in Mogadishu, Somalia in a raid which freed all the remaining hostages 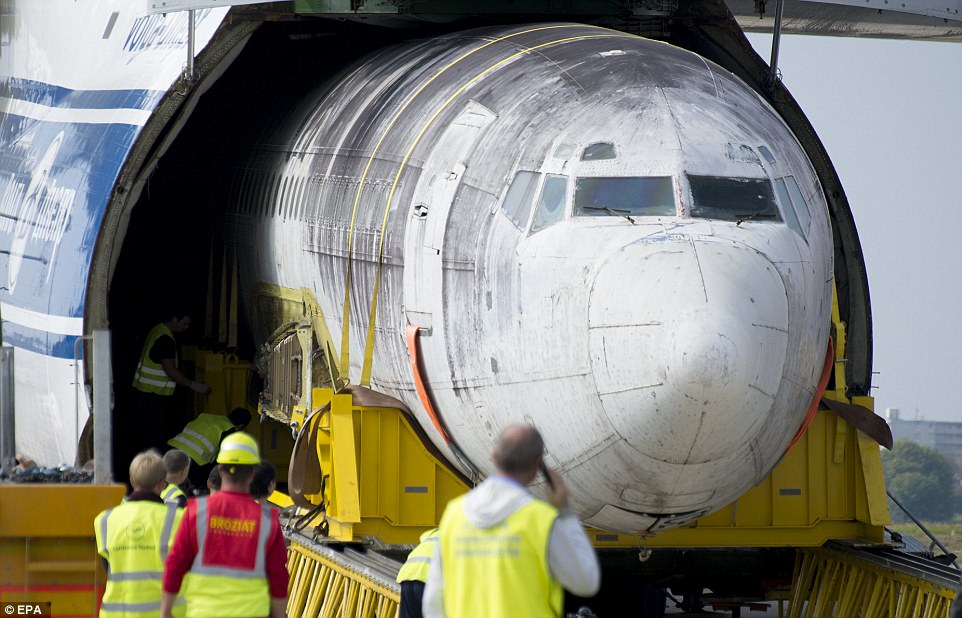 The aircraft returned to service with Lufthansa following the anti-terror operation, before the jet was sold on 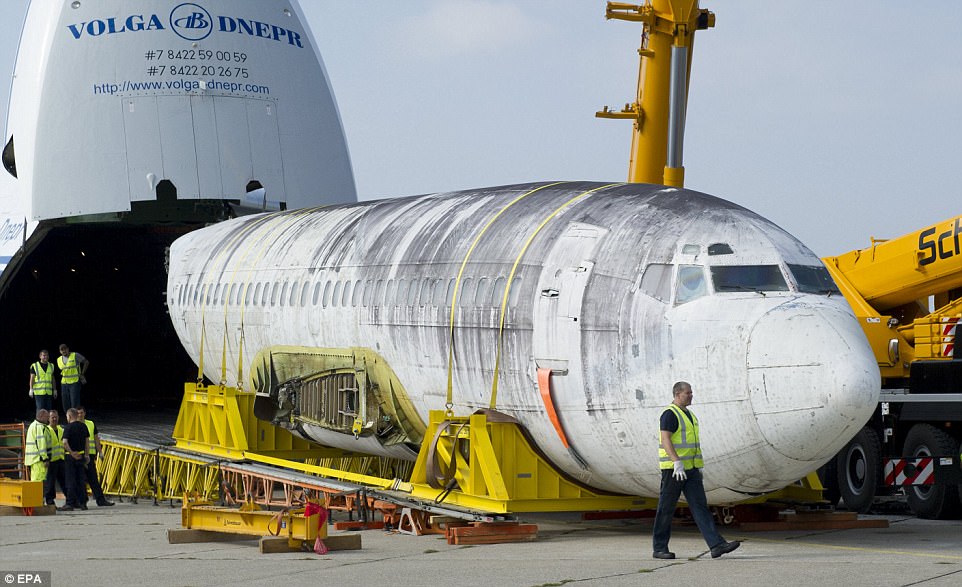 The aircraft, pictured, will be returned to its former glory and placed in a museum inside the Dornier aerospace museum 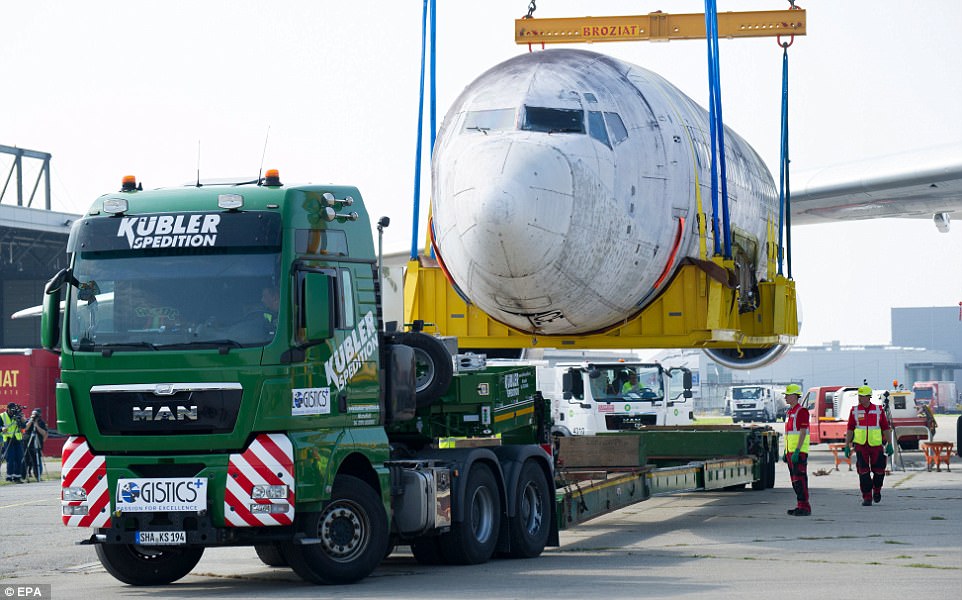 In the years since that dramatic night when gunshots blasted through its cabin, the aircraft kept flying – first for Lufthansa, then for French, Indonesian and finally a Brazilian airline, which in 2008 retired it on the jungle’s edge.

Now the plane, weathered by tropical sun and rain, will find a new home in Germany’s Dornier aerospace museum near Lake Constance, set to be serve as an exhibition space on Germany’s era of homegrown terrorism.

‘It didn’t deserve to die in the jungle,’ said former air hostess Gabriele von Lutzau, whose courageous and compassionate role during the ordeal earned her the nickname ‘the Angel of Mogadishu’.

The RAF emerged in 1970 out of the radical fringe of the Vietnam war protest movement and took up arms, in solidarity with revolutionaries such as Ernesto ‘Che’ Guevara and Ho Chi Minh, against what it saw as US capitalist imperialism and a German state then still riddled with former Nazis.

After training with leftist Palestinian militants, it launched a spate of shootings, bombings and kidnappings targeting politicians, police, bankers, business leaders and US troops. 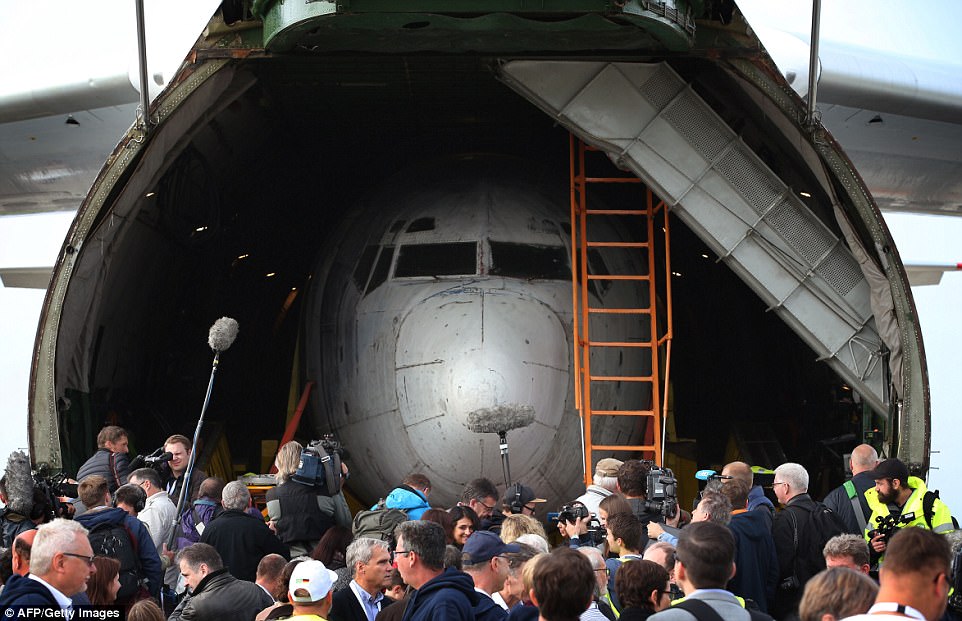 By 1977, its hard-core founding members, including Andreas Baader, were long since behind bars, and their comrades sought to free them from their cells.

On October 13, four militants of the RAF-allied Popular Front for the Liberation of Palestine hijacked Mallorca-Frankfurt flight LH 181, demanding the release of 11 RAF members.

During a five-day odyssey which included seven refuelling stops in Europe, the Middle East and Africa, the cell’s leader, who called himself Captain Martyr Mahmud, shot dead the pilot, Jürgen Schumann.

Then-chancellor Helmut Schmidt refused to give in even though RAF militants were also holding hostage the industrialist Hanns Martin Schleyer, a former SS officer.

The Lufthansa jet landed in Mogadishu on October 17, where Mahmud issued an ultimatum, threatening to set off plastic explosives and dousing passengers in alcohol to accelerate the fire.

After nightfall, 30 German commandos landed, the plane’s lights turned off. Operation ‘Feuerzauber’ (‘magic fire’) was the first mission of the new GSG 9 unit, founded after the security debacle of the 1972 Munich Olympics massacre of Jewish athletes.

While German officials played for time, the special unit approached the plane’s rear blind spot from behind sand dunes, then climbed blackened ladders to its doors and escape hatches.

Mahmud was on the cockpit radio when he was blinded by flash-bang grenades outside.

The commandos stormed in, one yelling in German ‘Heads down, where are the pigs!?’, and riddled all four hijackers with bullets, killing three and badly wounding a fourth.

‘Those German words were the best thing I heard during the entire hijacking,’ the former co-pilot, Juergen Vietor, said Saturday.

The 82 passengers, four remaining crew and the commandos all survived, and officials phoned the message ‘the job’s done’ to Bonn.

In a revenge act, and convinced their comrades had been murdered in jail, RAF militants shot dead Schleyer, after five weeks in captivity.

By then the group’s terror had claimed over 30 victims, but more waves of killings followed.

The RAF only disbanded in 1998, and, although it had ironically helped to vastly expand German police powers, many murders were never solved.

Today, most ex-militants are dead or living quietly as ex-convicts. Three remain on the run, suspected of robbing money transport vans with grenade launchers to finance their retirement.

The hijacking is often viewed in the context of the ‘German Autumn’, a series of events in 1977 involving far-left Cold War revolutionary groups.

Three months later – on July 30 – Jurgen Ponto, the chief of Dresdner Bank, was killed in his home in Oberursel by members of the group. 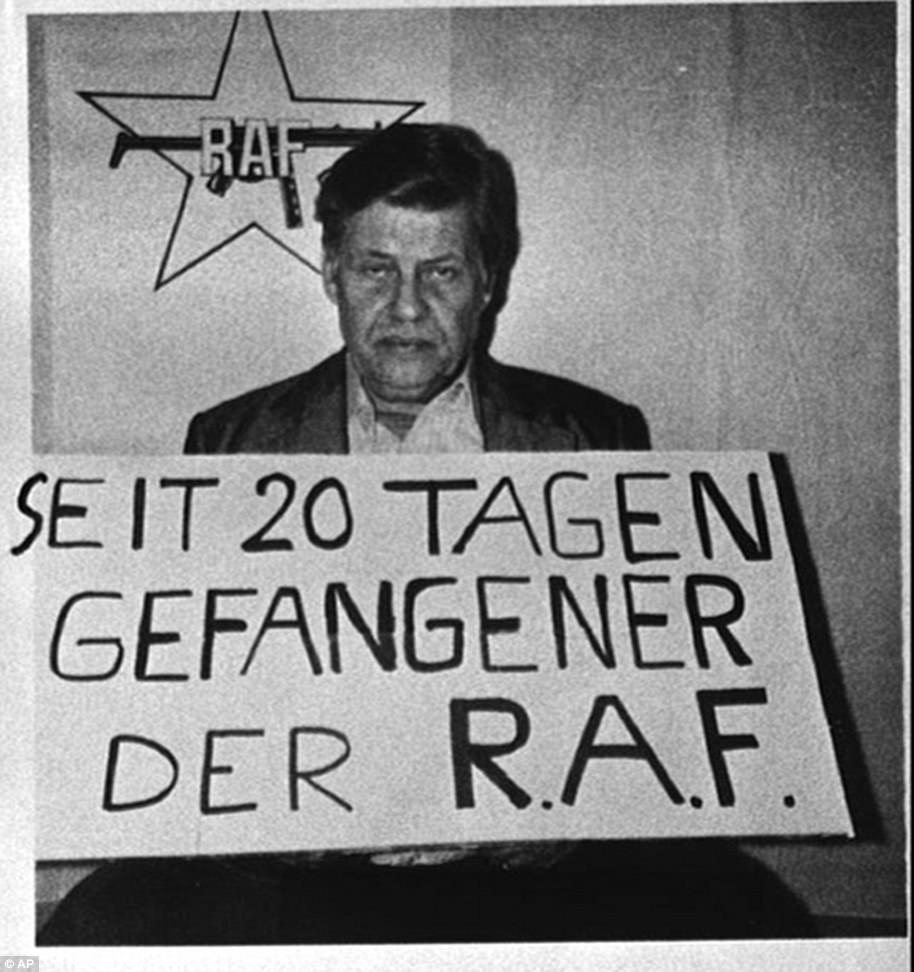 Hanns-Martin Schleyer, pictured, was kidnapped by the Red Army Faction and later murdered by the far-left terror group in 1977

One of the faction’s ‘commando’ units kidnapped and then murdered Hanns Martin Schleyer, the head of the employers’ association in Germany, after attacking his car in Cologne in September.

The Lufthansa hijacking was seen as the crescendo of the several bloody months.

On the same night as the successful operation to free the hostages, three jailed Red Army Faction members – Gudrun Ensslin, Jan-Carl Raspe and Andreas Baader – were found dead in their cells.

The Red Army Faction, known at the beginning of its activity as the Baader-Meinhof Gang, was founded in 1970.

Supported by the Stasi, East Germany’s security organisation, it was considered a terrorist group by West Germany.

The far-left militants are thought to have killed 34 people before their peak in 1977.

The group officially dissolved in 1998 after decades of assassinations, bombings, robberies and kidnappings.

Another left-wing organisation, Revolutionary Cells, was also involved in the ‘German Autumn’ and is thought to have committed close to 200 attacks between 1973 and 1993.