Lulled by Lima: Why Peru’s capital is more than a pit-stop

Lulled by lavish Lima: Why Peru’s cosmopolitan capital is way more than a pit-stop on the path to Machu Picchu

By Nick Boulos For The Daily Mail

The first European travellers to discover the delights of Peru were Spanish explorers in 1532.

Led by Francisco Pizarro, they settled on a dramatic spot, backed by tall cliffs and the foaming Pacific, and inhabited by native tribes.

Several hundred years later, the once tiny settlement has grown into a throbbing metropolis of eight million people and towering skyscrapers.

An oceanic endeavour: Lima is engagingly pitched on cliffs above the Pacific

And travellers dropping in on Lima en route to the Amazon, Sacred Valley and Machu Picchu will not be disappointed.

Home away from home

Hotel B (hotelb.pe). The ‘B’ stands for ‘Barranco’, the neighbourhood, but it could stand for ‘beautiful’, ‘bohemian’ and ‘brilliant’.

Housed in a grand belle epoque-style mansion that was a summer residence built in 1914, it features 17 stately suites with surrealist art and vintage furniture. There’s even free champagne at check-in.

It has to be a pisco sour. The national drink is made from a local spirit and flavoured with bitters and lime juice.

Several places, including El Bolivarcito (elbolivarcitoperu.com), claim to have invented it in the Twenties, though pisco has been enjoyed for much longer. Try it with araza juice (a fruit from the Amazon) at Amaz (amaz.com.pe).

Peruvian cuisine is all the rage with restaurants popping up in cities around the world, including London. 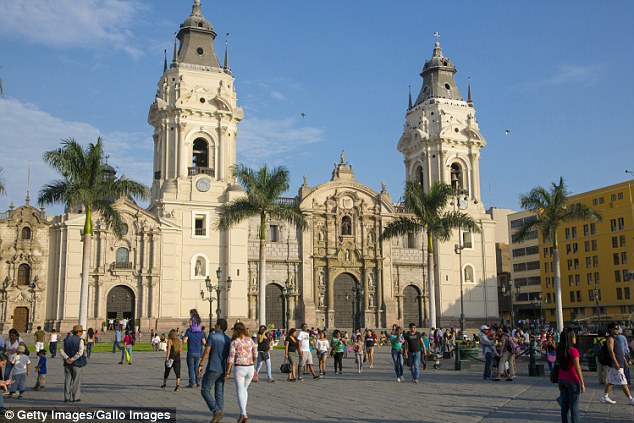 Heading back to the past: The city is awash with colonial architecture – its cathedral included

Discover how Lima became one of the most important cities in the Spanish Empire. Evidence can be found everywhere, from glorious colonial buildings in the Centro Historico to ruined city walls in Parque de la Murella.

But you can go back further, to the days of the Incas. Huaca Pucllana — a temple from AD500 — is in the heart of the city.

At buzzing Mercado Central, foodies stock up on exotic fruits and potions. Head across town to the coastal neighbourhood of Chorrillos, where you’ll find the early morning fish market.

Pick up quality arts and crafts at trendy Dedalo (dedaloarte.blogspot.com) in Barranco.

Further information on via the Peru Tourist Board (peru.travel).