Lure of the lighthouse: They’re romantic and have great views, but make sure you try before you buy

Who doesn’t resolve to make lifestyle changes in the new year? In terms of property, that often means swapping the neat home in suburbia for something more individual. And one of the great statement acquisitions is a lighthouse.

Standing like sentries guarding our shores, there is a sense of nobility about lighthouses, even though many have closed down.

Right now there are several for sale, including one of the country’s most famous — East Bank, Sutton Bridge — situated where the River Nene meets the Wash in East Anglia.

Shining on: Rua Reidh Lighthouse in Ross-shire is for sale at £450,000

This is the former home of Sir Peter Scott, the naturalist son of the Antarctic explorer, who lived there between 1933 and 1939, painting geese and other wildfowl.

His story is not an altogether happy one. Scott left East Bank during the war to serve as a commander on gunboats and when he returned the lighthouse was derelict. Worse, the sea walls had been pushed back half-a-mile seaward to create more farmland.

Without the tidal pools he needed for his wildfowl, he had no use for the place. Scott moved on and the lighthouse went into a spiral of decline.

Current owners Doug and Sue Hilton were its saviours in 2010. ‘We re-rendered the tower, put in new, hardwood window frames and decorated,’ says Doug, 66, who is relocating to look after elderly relatives in Wales and has the lighthouse on the market for £600,000 (fineandcountry.com, 01553 769100).

‘It’s a lovely, warm home that kind of wraps itself around you. It’s fantastic for bird-watching and I hope whoever buys it opens it to the public.’ 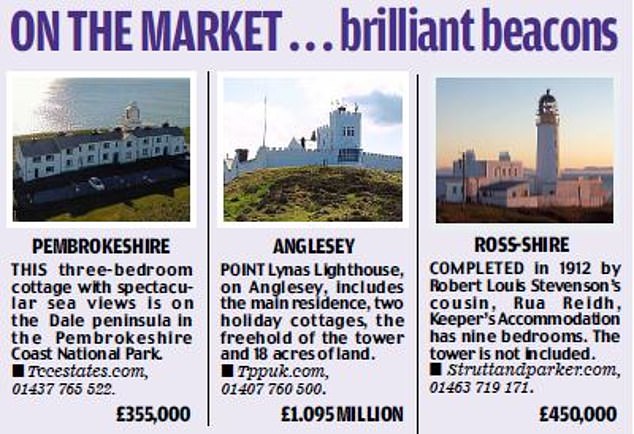 Like most things with niche appeal, lighthouses attract fanatical followers. They even have an appreciation society led by retired policeman, Russ McLean in Wick, Scotland. Russ first became hooked on lighthouses when he rented Davaar Lighthouse in Argyll for six years in the late Eighties.

Later, he formed a club of 20 like-minded enthusiasts, all of whom put between £10,000 and £20,000 into the kitty and they have, in the past 20 years, renovated and lived in eight lighthouses.

At the same time he runs lighthousesforsale.co.uk — his not-for-profit ‘research facility’ which gets about 24,000 visits a month from fellow aficionados.

‘There is something utterly beguiling about lighthouses,’ says Russ. ‘I can’t help but buy the things.’

Owning the Leading Light Lighthouse on Great Castle Head, St Ishmaels, Pembrokeshire, symbolised the start of a new life for the late Ron and Mary Udall in the Eighties. 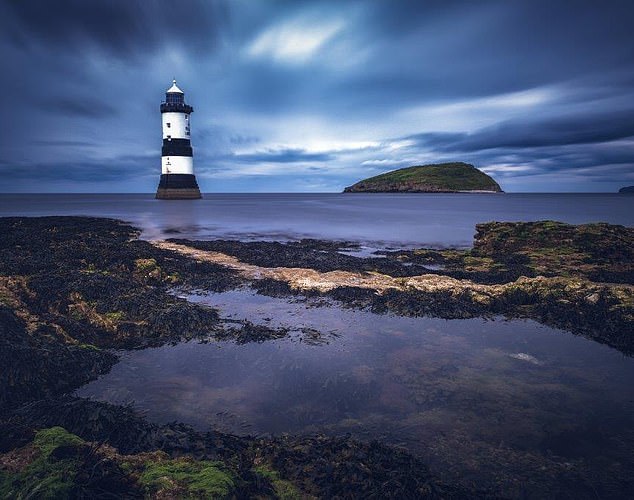 Standing proud: Standing like sentries guarding our shores, there is a sense of nobility about lighthouses 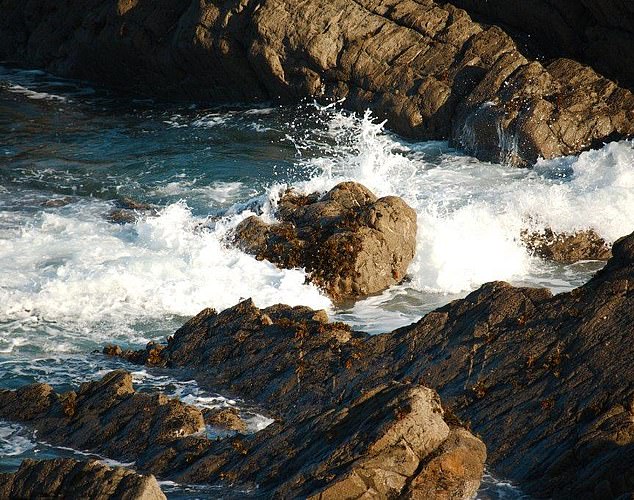 ‘There is something utterly beguiling about lighthouses,’ says Russ McLean. ‘I can’t help but buy the things’

They had visited the lighthouse for annual holidays since the Sixties, when it was owned by Norman Crabtree, chairman of the Sheaffer pen company.

Now they could afford to retire from their lace- trimming business in Nottingham and live the good life.

‘I’m convinced that living there enabled them to enjoy longer, healthier lives,’ says Richard Udall, who is overseeing the sale now both his parents have passed away.

‘The house is in a spectacular position, overlooking the Milford Haven estuary and they used to love watching the seals from the kitchen windows.’

The Udall family do not have responsibility for the lighthouse beacon, which is the property of Milford Haven Port Authority.

The house itself is square-shaped and made up of two three-bedroom lighthouse keepers’ cottages connected by an inner hall. The Udalls have added double glazing and central heating, but kept the original flagstone flooring, fireplaces and dressers.

The coastal path runs alongside the nine acres of grounds, while on the north-east side there is access to a jetty where, rumour has it, Prince Charles landed on one of his early visits to the Principality.

And in Ross-shire, there’s a rare chance to buy Rua Reidh Lighthouse for sale at £450,000, struttand parker.com (see On The Market below).

Lighthouses have often been associated with tragedies. On August 18, 1960, David Collins, aged 15, and his father sailed a dinghy to Little Ross island off Kirkcudbright, Scotland.

They called in on the lighthouse but there was no sign of life; just a phone ringing, unanswered. The pair gingerly explored the nearby cottages and there they came across a grisly sight.

The relief keeper, Hugh Clark had been shot dead. They called the police and it did not take them long to work out that the murderer was Robert Dickson, the assistant keeper — the only other person on the island.

Dickson was spared the death penalty and sentenced to life imprisonment as he was considered mentally ill. How much the lonely life on the lighthouse contributed to his mental state will never be known.

‘The main piece of advice I give to anyone considering buying a lighthouse is to rent one first for a few weeks,’ says Russ McLean. ‘Be there in the middle of winter as well as the summer. It’s a fantastic, dramatic way of life, but it’s not for everyone.’ 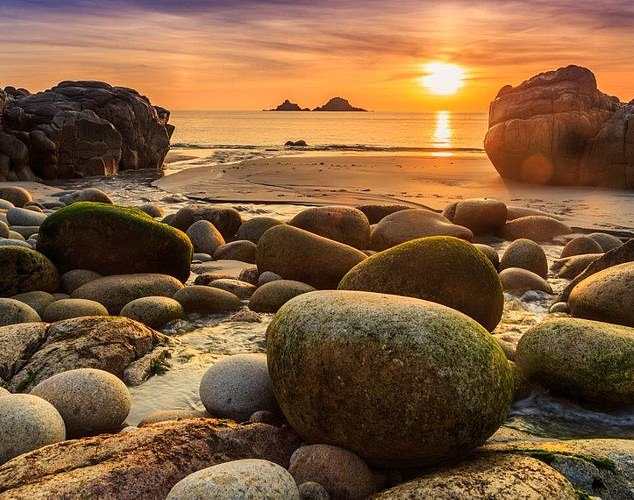 ‘The main piece of advice I give to anyone considering buying a lighthouse is to rent one first for a few weeks,’ says Russ McLean