The homeowners’ association for America’s richest zip code Fisher Island, which bought up coronavirus antibody tests for all of its millionaire residents, has been granted a $2million government loan intended to prop up small businesses.

The luxury private island off the coast of Miami, only accessible by boat or helicopter, is now asking residents to vote on whether to accept the emergency handout – after several big businesses have faced a backlash for taking money intended for small firms hard hit by the pandemic.

The association is responsible for managing and maintaining the common areas, swimming pools and tennis courts around the multimillion-dollar condos on the elite 216-acre paradise island home to tennis star Boris Becker and Czech model Karolina Kurkova.

The news comes as the US Paycheck Protection Program has been plagued by a string of scandals, as huge multi-million dollar companies rushed to pocket the emergency money designed to help small businesses pay their workers and bills, leaving those it was intended for without a dime.

The homeowners’ association applied for the government funds on April 4 and was granted $2million Monday, according to an email sent to residents Wednesday and seen by the Miami Herald.

The association is now asking members to vote on whether to accept the handout ahead of a board meeting Friday to decide the outcome.

‘It is very important to the board of Directors to take into consideration the views of our members,’ the email said.

‘It is also important to the board that the right decision is made for the island.’

The association, which oversees more than 20 smaller condo associations and is separate to the Fisher Island Club, has until next Thursday to accept or lose the funds. 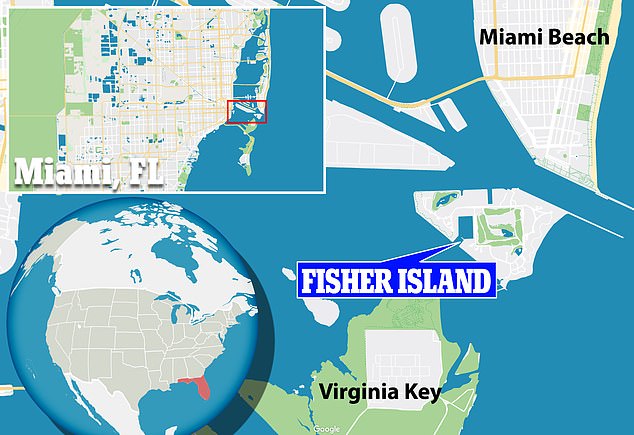 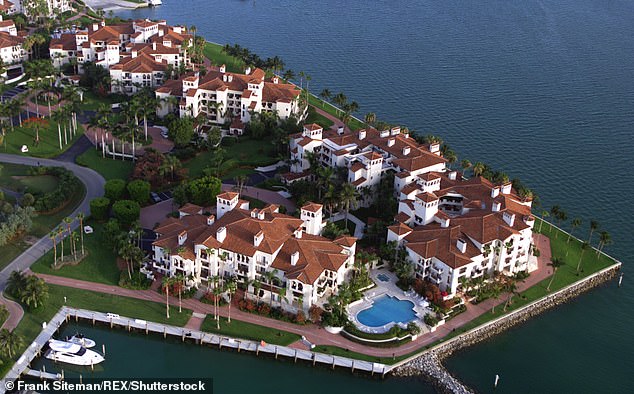 The association is responsible for managing and maintaining the common areas, swimming pools and tennis courts around the multimillion-dollar condos home to tennis star Boris Becker and Czech model Karolina Kurkova

Companies that use the money to avoid layoffs will not have to pay the money back.

However, multi-million dollar public companies lined up for the federal loans and bled the pot dry, with the government announcing last week the money had run out before smaller, eligible firms could get a dime.

Due to legal loopholes, some large public companies with thousands of employees were able to claim through the scheme.

The program has a $10million limit, but large firms have spread claims over multiple subsidiaries with staff of less than 500 so they can take home funds.

Research from Morgan Stanley shows that of the fund’s $349 billion, $243.4 million of the loans was allocated to at least 90 publicly traded companies, which could have gone to help around 1,100 smaller businesses.

With the PPP funding now depleted, lawmakers are scrambling to pass new legislation that would see a further $331 billion available to small businesses as part of a wider $483 billion coronavirus relief package.

Companies that use the money to avoid layoffs will not have to pay the money back.

Ana Tinsly, a spokeswoman for SEIU Florida, the union that represents about 130 groundskeepers and security workers employed directly by the association, told the Herald there had been no layoffs at the association and workers had been given extra paid days off amid the pandemic.

‘None of the associations on the island is in financial peril,’ former association CEO Mark James told the Times during the Great Recession.

The latest saga at the US’s wealthiest zip code comes after it emerged last week the millionaire set had bought up enough coronavirus antibody tests for all its residents and employees.

Fisher Island purchased 1,800 tests at $17 each — taking a $30,600 hit to its annual operating budget — which were then administered by doctors from a UHealth clinic to all 800 families living on the paradise island and its workers.

‘This is what the Fisher Island residents wanted. Our physicians ordered it for them, they paid for it themselves,’ UHealth spokeswoman Lisa Worley told the Miami Herald last week.

Sissy DeMaria, the spokeswoman for Fisher Island, told DailyMail.com that half the island’s residents are over the age of 60, making them vulnerable to the contagious respiratory disease.

She said Fisher Island officials have established an island-wide disease surveillance and testing system with the University of Miami health system.

‘To further minimize spread on the densely populated island with half of the residents over the age of 60 and at high risk, Fisher Island asked UM Health Clinic to procure antibody testing for all employees and residents. Fisher Island is funding the cost of the testing which is underway now,’ she said. 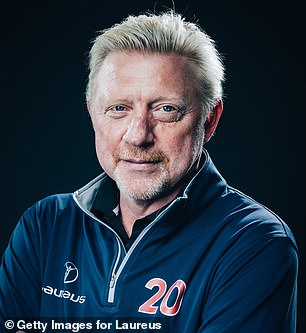 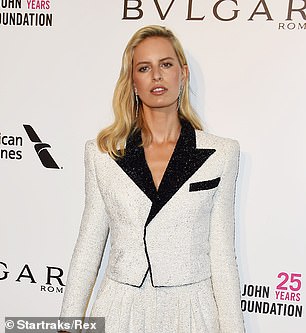 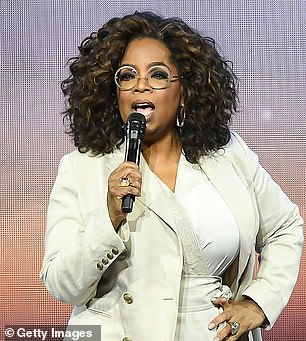 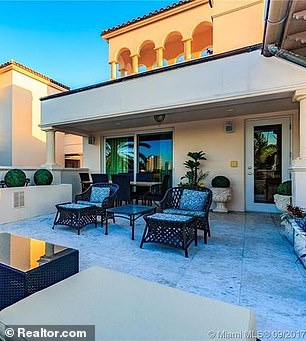 Oprah Winfrey’s former luxury four-bedroom Fisher Island condo pictured above. She sold her Florida 6,170-square-foot penthouse in 2001 for $6.5million. Canadian billionaire Lawrence Stroll then purchased it for $13.5 million in 2014

The news sparked outrage as Americans continue to face widespread shortages of both the coronavirus and antibody tests, which medical experts warn are critical to tracking the spread of the virus and safely reopening the economy.

The testing on Fisher Island was expected to be completed last week and will be followed up with contact tracing to determine if there has been community spread, the Herald reported.

Results will not be made public for several weeks, Lisa Worley, a spokeswoman for UHealth, said Monday.

Antibody tests produce results in about 15 minutes, but experts have raised doubts over their reliability.

The antibody test is a blood prick used to determine if someone has been exposed to COVID-19 and has developed antibodies to it.

Cases of coronavirus continue to rise across Florida, with 28,832 people infected and 960 dead from the virus as of Thursday. 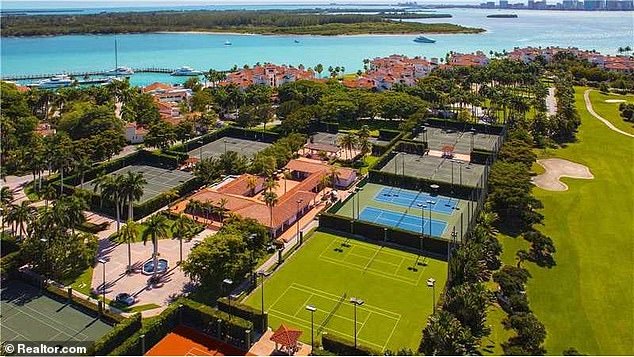 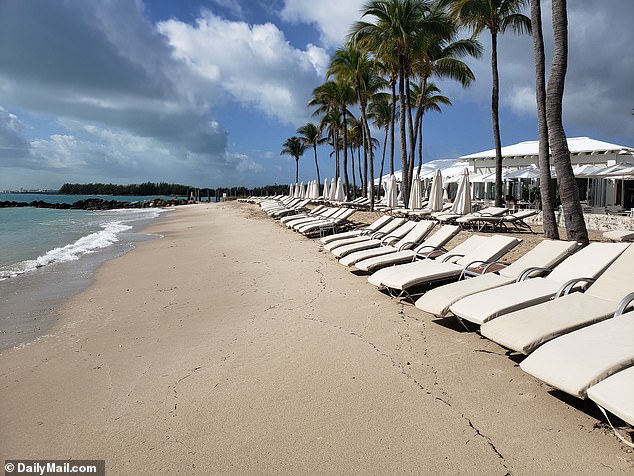 Fisher Island Beach Club’s beach on Biscayne Bay. Testing on Fisher Island was expected to be completed last week and will be followed up with contact tracing to determine if there has been community spread

Oprah Winfrey and Mel Brooks also had homes on the oasis.

Memberships to the Fisher Island Club cost about $250,000 and the average annual income was $2.5million in 2015, according to Bloomberg.

Island off Miami that has been named the wealthiest zip code in the US with a per capita income of $2.5million

In 2019 Fisher Island was named the wealthiest zip code in the United States, where the average income in 2015 was $2.5million per year.

Located just a short boat ride away from Miami, an analysis conducted by Bloomberg shows that the highest per capita income of anywhere in the 50 states is the area whose zip code reads 33109.

It is also a preferred landing spot for wealthy foreigners who buy up pricey real estate.

The relative wealth of residents of Fisher Island is staggering. Of all zip codes in the US, Fisher Island was the only one where more than half of all tax returns showed an income of at least $200,000.

It has approximately 700 families who own either a home or an apartment, but only a small fraction of them are actually there at a given time, according to Forbes.

That’s because Fisher Island is primarily a vacation haunt for the superrich, who only spend a few weeks or months at a time.

In February 2015, an unidentified buyer plunked down $35million for a seven-bedroom penthouse on the island, according to Mansion Global.

The buyer, reported to be a Russian businessman, then put the property back on the market in August 2015 for $38.5million.

Anyone visiting the island will need to be prepared to shell out some big bucks. The island is home to eight restaurants, among them several high-end steakhouses. All the restaurants charge residents’ expense accounts, so no cash changes hands, according to Forbes.

There is also a nine-hole golf course, a bird-watching area, and 18 tennis courts that are made of the same grass as in Wimbledon and the same clay as in Roland-Garros.

As if that weren’t enough, the island boasts of a mile-long private beachfront with sand that was especially imported from Bermuda. Every morning, workers rake it.

Fisher Island as a home to multiple families is a relatively new concept. It was first created over 100 years ago as part of land reclamation projects in and around Miami Beach.

In 1925, William Vanderbilt II traded a luxury yacht for ownership of the island. After he died in 1944, the island was inherited by Edward Moore, a member of the Moore family which co-founded US Steel.

After Moore’s death, the island was sold to Gar Wood, a millionaire who invented hydraulic construction equipment. Wood’s family was the only one living on the island.

In 1963, Wood sold the island to a development group that included Richard Nixon, who would eventually become president in 1968.

It wasn’t until the 1980s that massive, widescale development on the island began in earnest.

Since then, it has become one of the most expensive areas in which to buy real estate.