Luxury sailing holidays: The best boats for the Med, including the one owned by Roland Emmerich

Ask friends what they want from a holiday right now and they’ll most likely tell you it’s a chance to escape, a sense of freedom and an opportunity to push the boat out when it comes to budget.

A luxurious sailing holiday, where you don’t have to lift a finger except to raise a glass or turn the pages of a book, ticks all those boxes, and would be an indulgent reward after months of self-catering at home.

Sometimes we just need a jolly good dose of rest and recuperation in the sun, enjoying time spent relaxing with old friends or favourite family. And by taking a whole boat for your own social bubble, there is no need to make any effort with new people or foreign languages – or trim sails, either.

The skipper skilfully moves your floating bolthole from one charming mooring place to another, via tucked-away coves and secret snorkelling spots, while your chef prepares feasts.

Take two or more vessels and a big group of several families or couples can all sail together, then meet for swimming, watersports, drinks and meals.

A new company, SailSterling, has encapsulated it all with its one-week, luxury Wine & Catamaran Club tours of the spectacular volcanic Aeolian Islands in Italy, starting at the end of August. 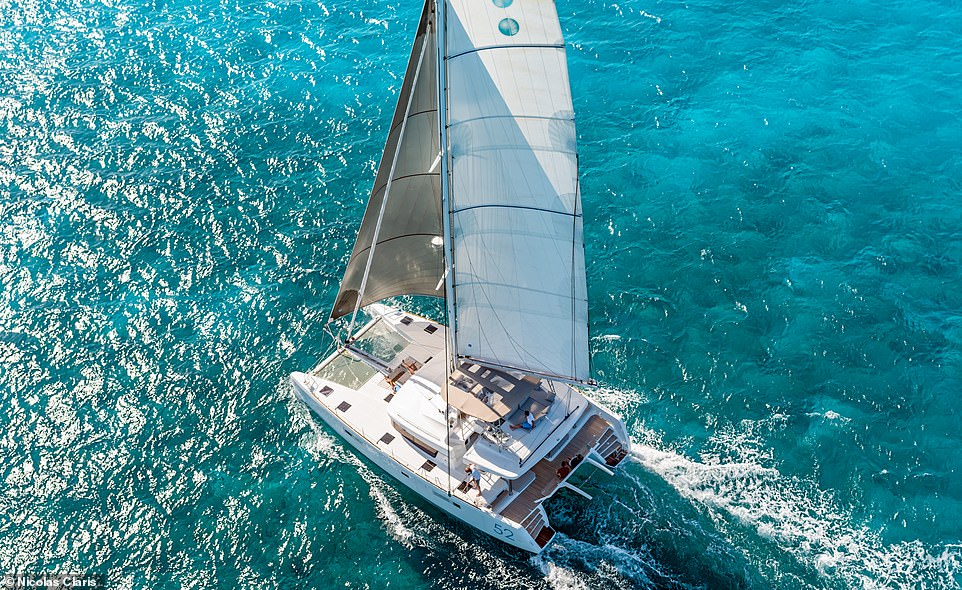 Five gleaming catamarans, each with just three or four cabins, sail from Capo d’Orlando on the north coast of Sicily. On board are fine wines from around the world (including Herbert Hall sparkling wine from Kent) to complement lunches and dinners prepared by the chefs from fresh ingredients bought en route.

Highlights of the holiday are two private vineyard visits with bespoke meals. At Tasca d’Almerita, on the island of Salina, guests take a vineyard tour followed by lunch at the chef’s table, then at hilltop Tenuta di Castellaro, on Lipari, a sunset wine-tasting is followed by dinner cooked by the chef from one of the island’s top restaurants, accompanied by live music.

With a maximum three hours a day of line-of-sight sailing (you’re able to see where you have sailed from and where you are sailing to), it’s a perfect mix of rest interspersed with swimming, paddleboarding, trips ashore – and an open bar.

On the volcanic island of Vulcano, you can hike to the rim of its crater or wallow in thermal baths.

Panarea has Bronze Age ruins and sandy beaches, and from the deck at night you may see the fireworks as the highly active Stromboli pumps red-hot lava high into the inky, star-strewn sky. 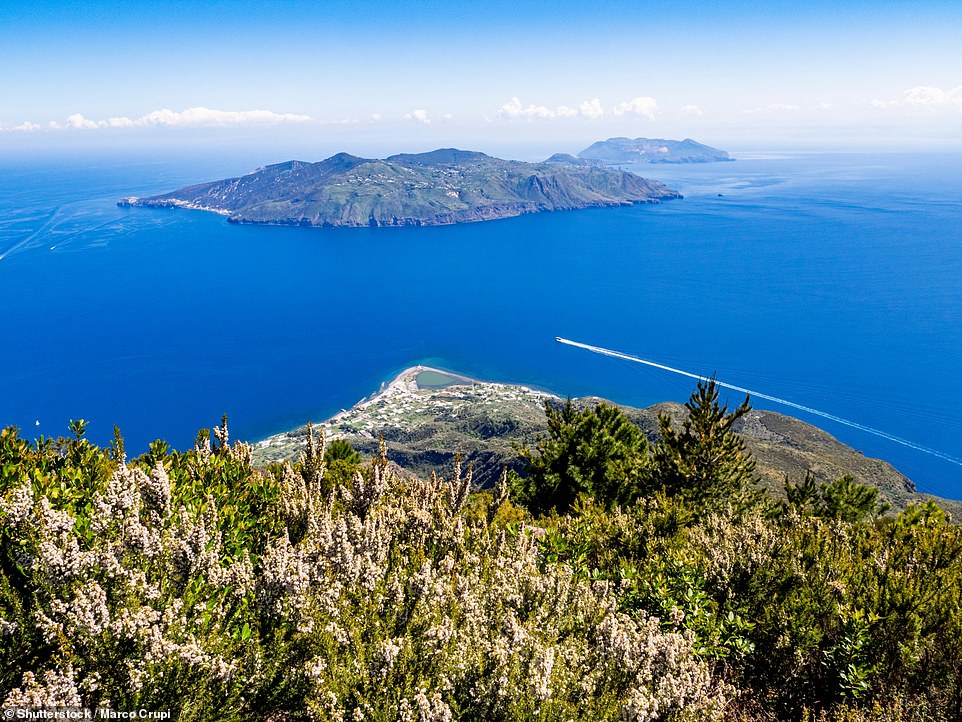 The islands of Lipari and Vulcano seen from Salina. You can visit them all on SailSterling’s Wine & Catamaran Club cruises of the Aeolian Islands

Six-night Wine & Catamaran Club cruises depart weekly from August 28 to September 25. Exclusive charter of a Lagoon 42 catamaran is from £3,150 per person (based on the maximum of six guests).

The largest catamaran, the Lagoon 52F, costs from £6,250pp for eight guests. The cost includes most meals, drinks, vineyard visits and other activities (sailsterling.com).

For a more traditional exploration of the islands around Sicily, climb aboard Sundial, a wooden, two-masted gulet with lots of deck space. There are six en suite cabins, but who could resist the temptation to get cosy on deck and fall asleep to a light show of streaming lava and falling stars? 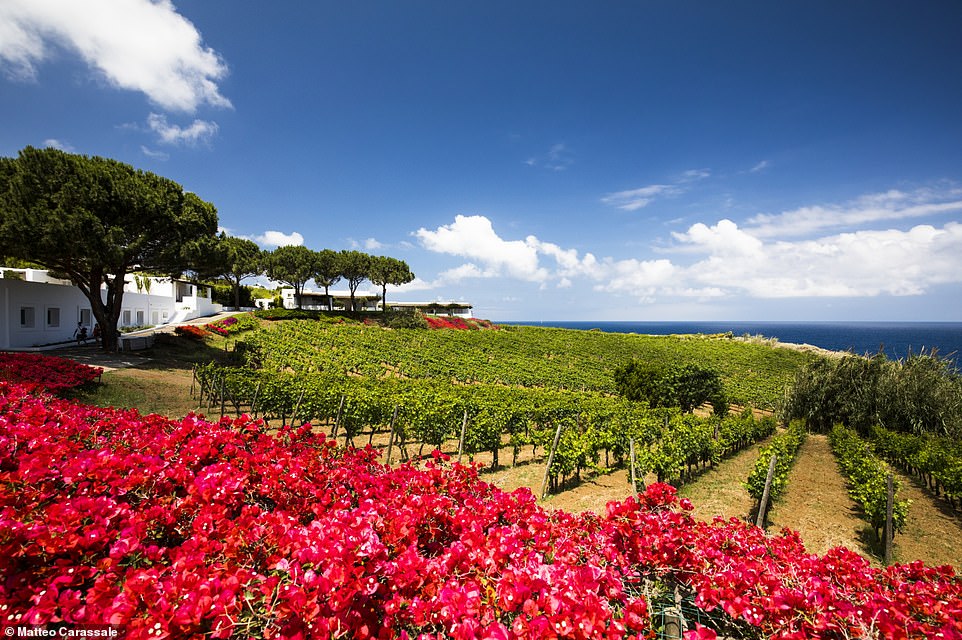 Highlights of the Wine & Catamaran Club cruise are two private vineyard visits with bespoke meals. One is to Tasca d’Almerita, on the island of Salina, pictured

The family-owned boat is also family-run, with Salvatore Taranto and son Angelo at the helm, and daughter Vanessa in the galley cooking local specialities. The family is from the island of Salina.

Guests spend the first night of their holiday at Monaci delle Terre Nere, a boutique hotel and wine estate on the fertile slopes of Mount Etna before setting sail from Sicily for six nights on their private charter.

Half-board only, with wine, is included, so you can also enjoy convivial dinners in the islands’ restaurants. Dinners on board can be arranged, but at extra cost. 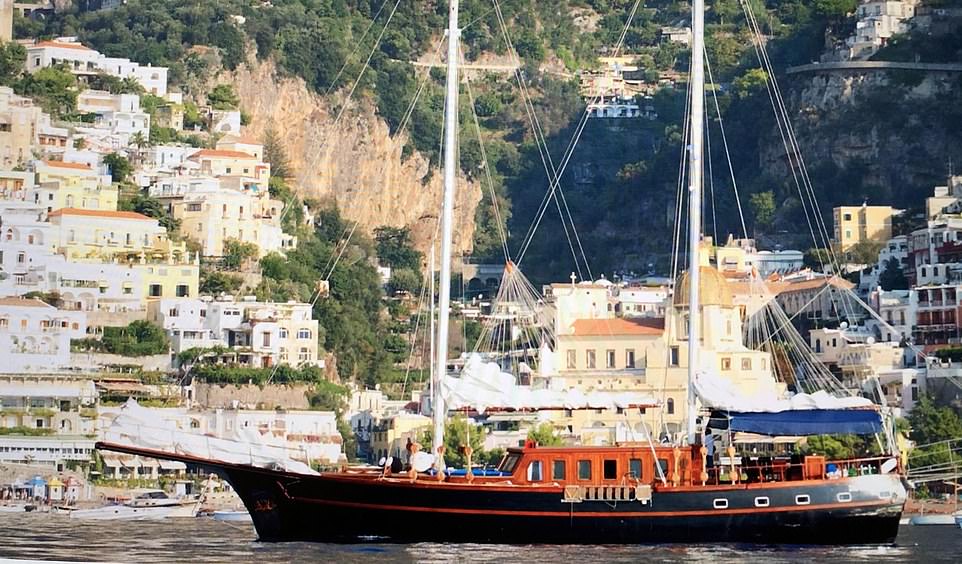 The family-owned Sundial, a wooden, two-masted gulet with lots of deck space. It offers cruises around the islands close to Sicily

Luxury Sicily specialist Cognoscenti Travel offers one night’s B&B in the hotel and six nights’ exclusive charter of the gulet for up to 12 guests, from £17,000 – about £1,400pp (cognoscentitravel.com).

For your chance to swan around the Greek Islands like Hollywood stars from a bygone era, get on board Maid Marian 2.

This head-turning motor yacht, 108ft of teak and Art Deco furnishings, was built in 1931 and recently revamped by its current owner, Roland Emmerich. The director of Independence Day and The Day After Tomorrow, among other blockbuster films, has installed 21st Century luxuries, including a state-of-the-art sound system. 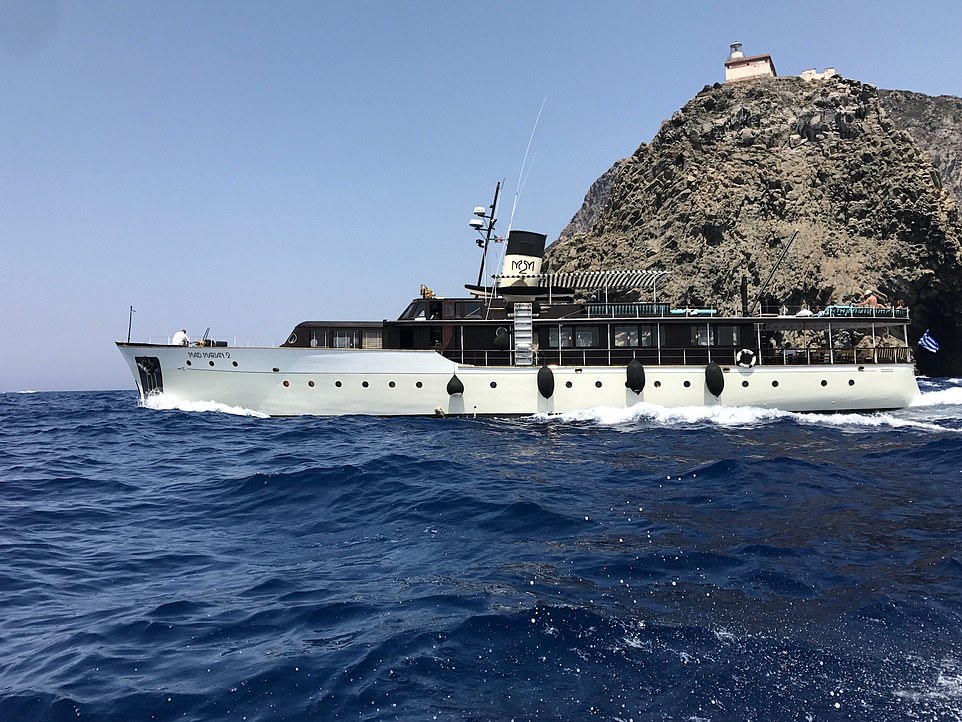 The Maid Marian 2, pictured, was built in 1931 and recently revamped by its current owner, Roland Emmerich – the director of Independence Day, The Day After Tomorrow and other blockbuster films 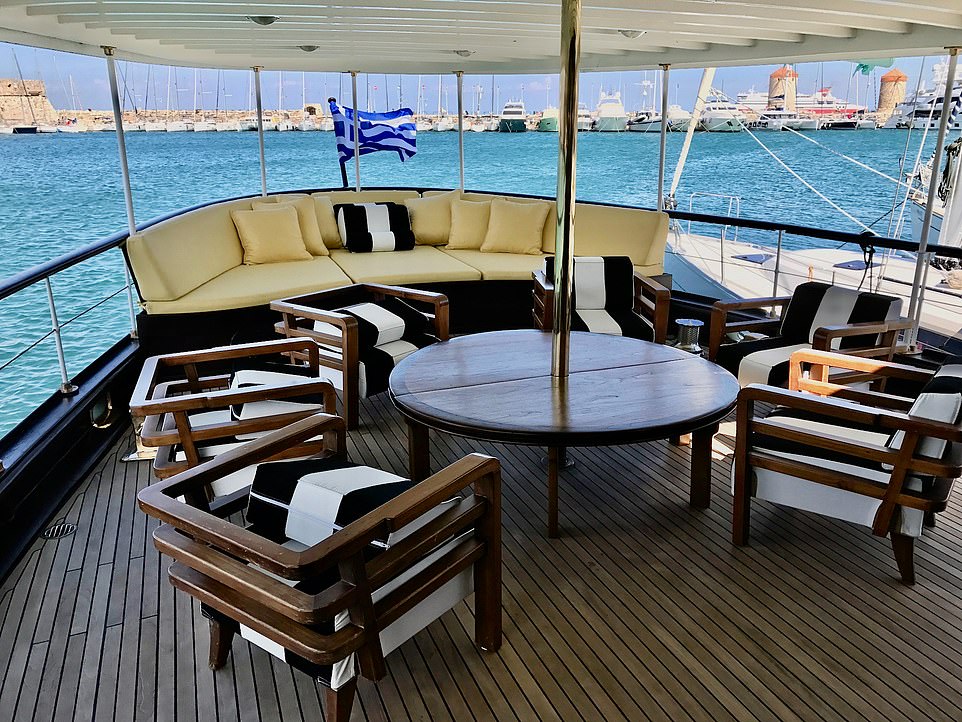 In a week on Maid Marian 2, pictured, you can explore the Greek Cyclades, including the islands of Kynthos, Delos and Mykonos

Sailing from Lavrio (handy for Athens airport), over a week you can explore the Cyclades, taking your pick of islands such as serene Kythnos, with chapels perched on rocky headlands, and tiny Delos, where myth has it that Apollo, god of the sun, was born.

You’ll also have the chance to explore, Mykonos, with its legendary nightlife, and rugged Serifos fringed by beaches accessible only by boat. Maid Marian 2 costs from £40,000 for up to ten of you for a week (or £4,000pp), including full board and drinks (maidmarian2.com).

For those who want both time on the water and dry land, how about a week on a crewed yacht, stepping aboard in Corfu and wafting around the Ionian Islands, followed by a week in a villa on Kefalonia? 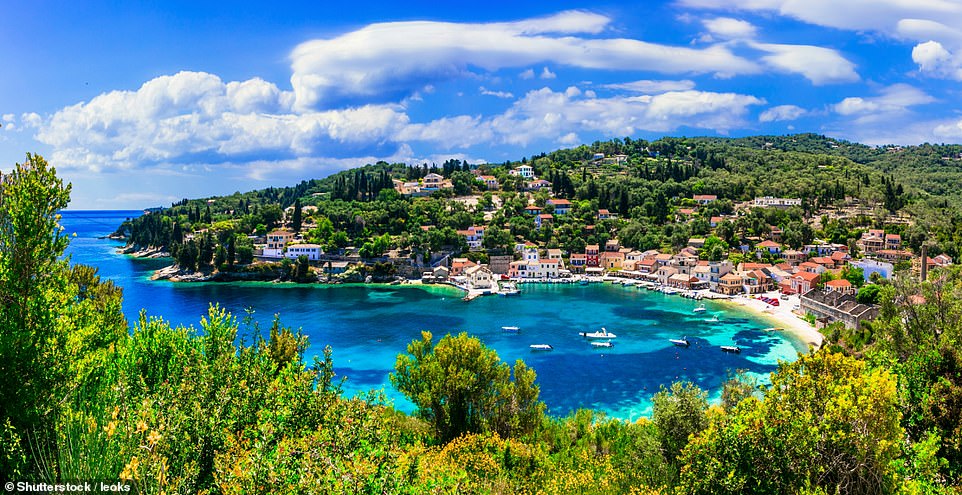 You’ll sail around the bays and beaches of Paxos, pictured, and other Greek islands aboard Argentous, a sleek, four-cabin cruise-racer

Aboard Argentous, a sleek, four-cabin cruise-racer, you’ll sail around the bays and beaches of Paxos and Antipaxos before heading south to Lefkas, Meganissi and Ithaca, with plenty of stops along the way for swimming, windsurfing and paddle-boarding. Guests then check in to Sunset House, which has stunning coastal views.

The price for a group of six family or friends is from £5,063pp, which includes seven nights’ half-board yachting and seven nights’ self-catering at three-bedroom Sunset House, transfer to yacht, two hire cars on Kefalonia and flights (gicthevillacollection.com).

Croatia is renowned for its clear seas and unspoilt islands, many of them uninhabited, which makes it wonderful for exploring by boat. A new ten-night itinerary offers a week’s island-hopping aboard a crewed gulet, such as Lady Gita, then the run of a medieval, fortified former monastery on the tip of the island of Lopud, where the 13 monks’ cells have been converted into five suites. 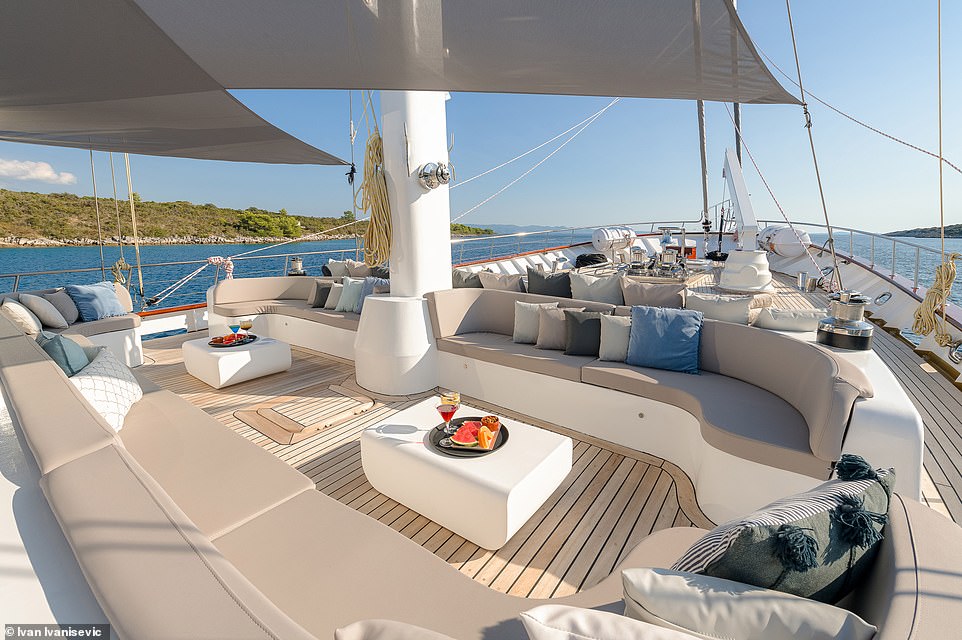 Lapping up the luxury: Charter the Lady Gita for a tour of the Elaphiti Islands off Croatia, before rounding off your trip with a suite in an opulent converted former monastery

A highlight of the six-night charter, while sailing from Split to Lopud, is calling at Lastovo, one of Croatia’s most remote islands which is covered in forest and vineyards. It is followed by four nights at the luxurious Lopud 1483, which features a terrace at its highest point that is the perfect place to enjoy amazing sunsets and sweeping views of the Elaphiti Islands.

Full board, including all transfers, costs from about £5,800pp, based on ten sharing (rwwakeley.com).

For even bigger families or groups of friends, another Croatian option is to sail through the islands on luxury classic yacht Kairos, a handsome two-mast schooner, with five crisp white sails and eight cabins for up to 16 passengers, looked after by seven crew. 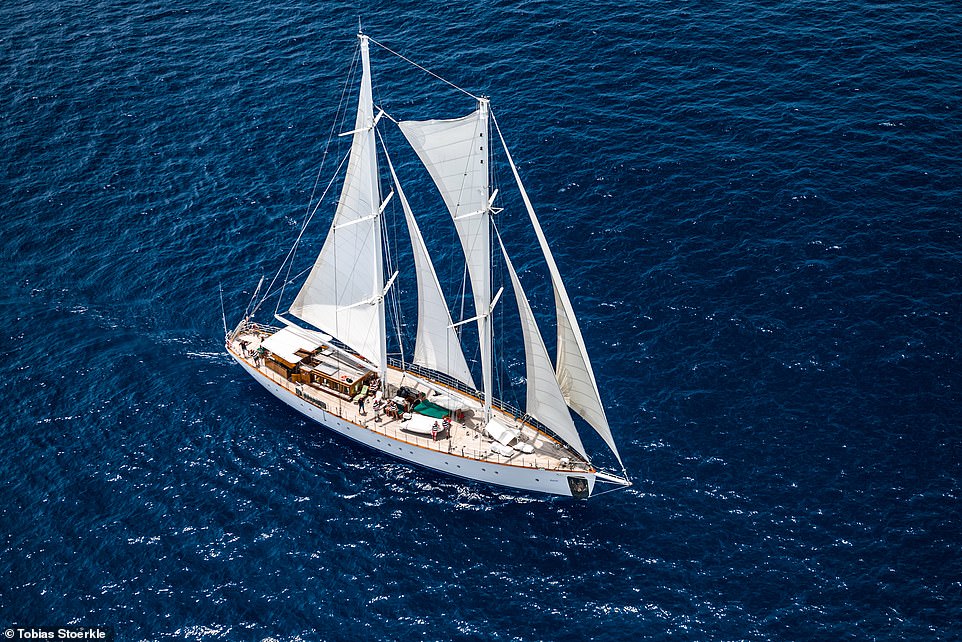 Luxury classic yacht Kairos, pictured, is a handsome two-mast schooner with five crisp white sails and eight cabins for up to 16 passengers

After plotting a route with the captain, who knows every nook and cranny of the islands of Hvar, Korcula, Vis and Brac, your party can stop off in craggy coves and snorkel in sea caves, go ashore to sandy beaches and sleepy villages or wake-board, tube-ride and water-ski from the boat.

A week’s full-board charter for up to 16 is from £35,000 (about £2,200pp). Alcoholic drinks and motorised water sports are extra (venturesailholidays.com).

On a week-long holiday around the Balearic Islands, you’ll find there’s much more to the region than the tourist hotspots of Majorca, Minorca and Ibiza. 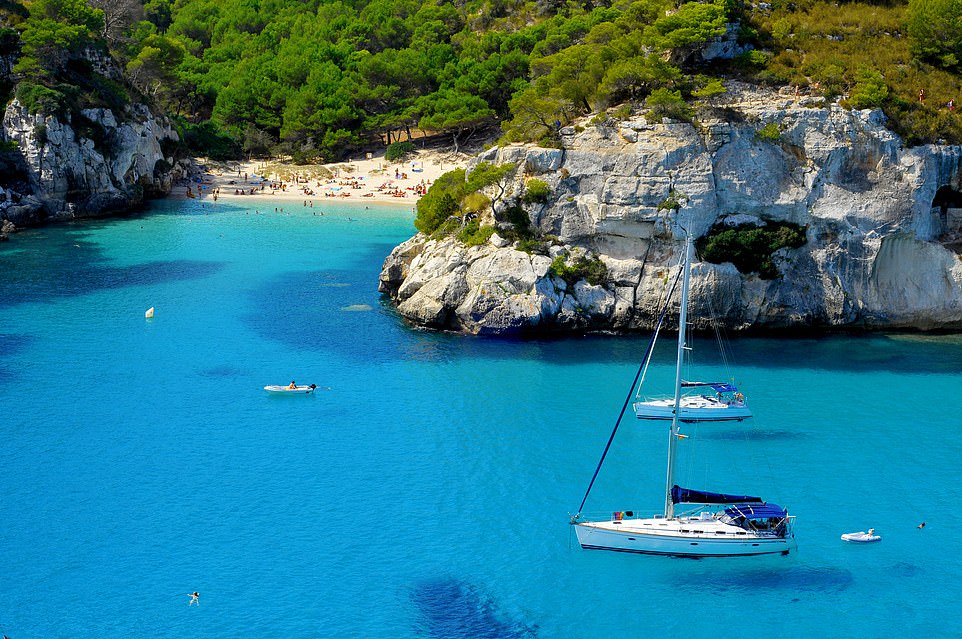 Calming waters: Take an island-hopping trip and drop anchor off Minorca on a week-long holiday sailing around the Balearic Islands

Set sail from Palma de Mallorca and, when you’ve had your fill of pottering around the white-sand beaches of Majorca’s coast, the skipper of your catamaran can take you to much smaller islands and islets. Wildlife-lovers will fall for the Cabrera Archipelago National Park, which teems with dolphins, whales, colourful fish and seabirds.

A glorious gathering of the clans or celebration of a big birthday with up to 30 guests can be huge fun when you form your own flotilla of up to four catamarans. Sail from Izmir to Bodrum along Turkey’s delightful Turquoise Coast, with sunken ancient ruins to snorkel around. 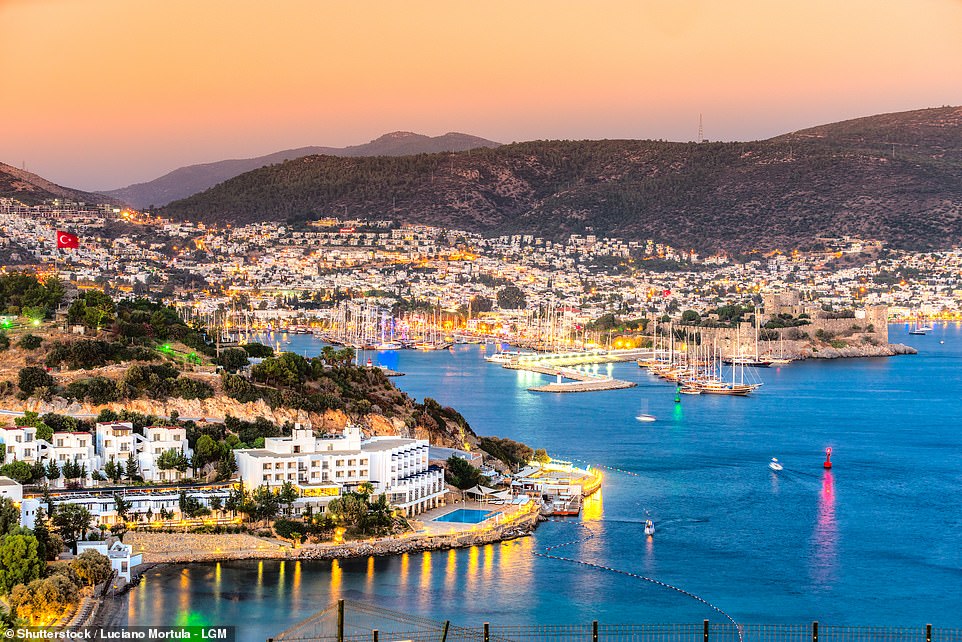 Charter a flotilla of up to four catamarans and sail from Izmir to Bodrum, pictured, along Turkey’s delightful Turquoise Coast

Pop over to Greek islands such as Milos, where the Venus de Milo was found, and enjoy secluded swimming and sunbathing spots just for your bubble.

Six nights’ charter of each Lagoon 62 catamaran, sleeping six to eight, costs from £36,245 (about £4,530pp if there are eight guests), including skipper and chef and full board (sail.meridianadventures.com).

Old-fashioned glamour doesn’t come better than Satori. In spring and summer, this drop-dead-gorgeous schooner is in Italy, giving the best views of the villages of the Cinque Terre clinging to hillsides of Liguria, the seven islands of the Tuscan archipelago and the beauty of Capri and the Amalfi Coast. 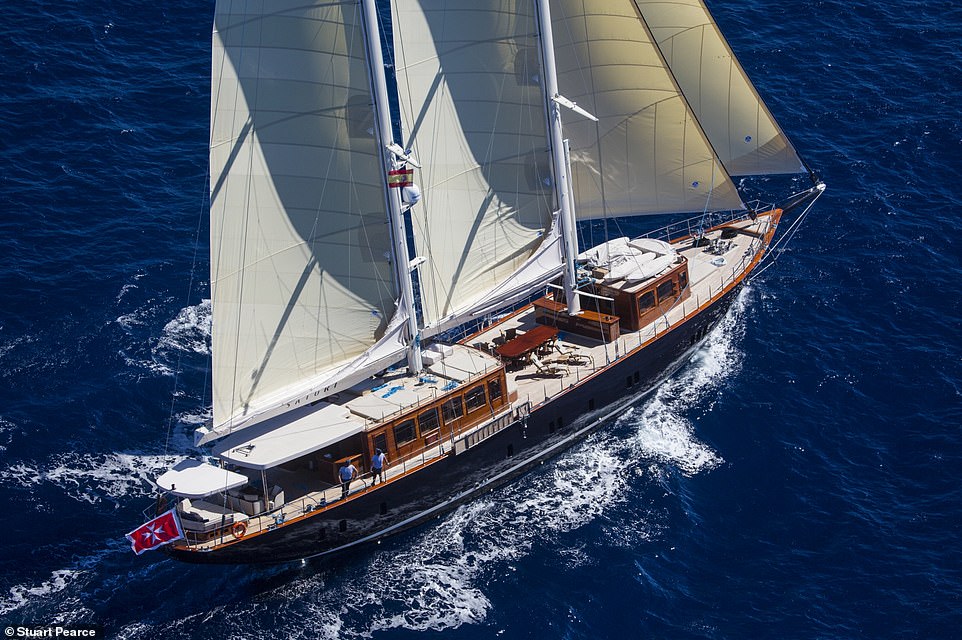 Satori, pictured, is the creation of Danish hoteliers who own the luxury Borgo Santo Pietro hotel in Tuscany. The vessel evokes the romance of the 1920s, with boutique-hotel ambiance 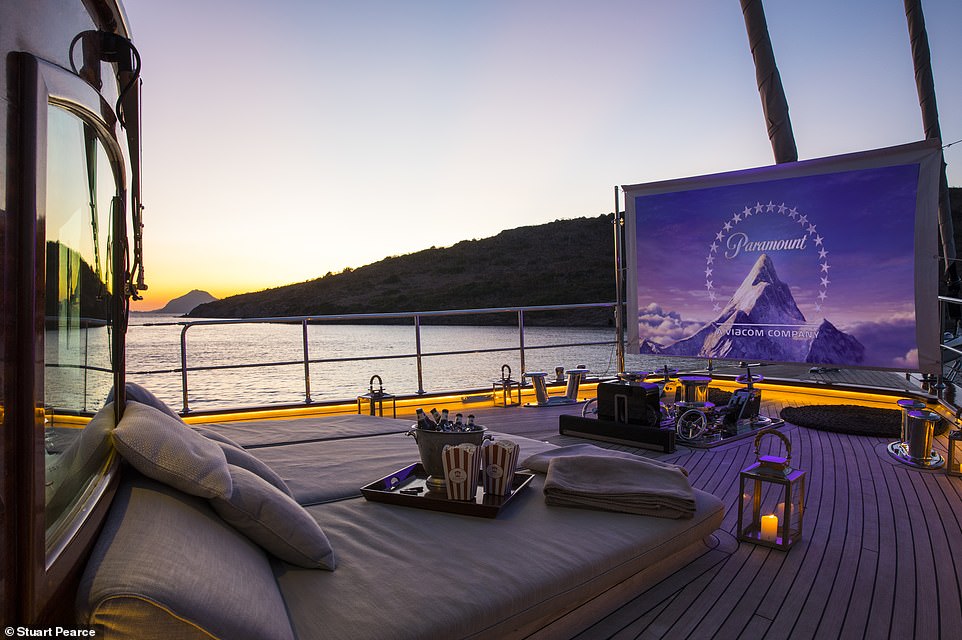 Satori costs about £150,000 to charter for a week for up to ten people, including all food and drink

Satori evokes the romance of the 1920s, with boutique-hotel ambiance and divine food. It is the creation of Danish hoteliers who own luxury Borgo Santo Pietro hotel in Tuscany.

You can watch the chef make dinner in the open kitchen on deck, then watch a film under the stars. Vast cabins have marble bathrooms and the elegant salon has an understated Scandinavian feel.

Satori costs about £150,000 to charter for a week for up to ten people, including all food and drink (satoriyacht.com).