Bosses at LV have launched a last-ditch attempt to push through the mutual’s controversial sale to US private equity.

In a statement branded ‘desperate’ by critics, the life insurer finally revealed details of the strategic review which ushered LV into Bain Capital’s jaws.

LV’s board said the review was ‘careful and detailed’ and selling the firm to Bain was the best way forward.

‘Desperate’: LV finally revealed details of the strategic review which led the life insurer into the jaws of Bain Capital

But experts slammed the mutual’s bosses for failing to be fully transparent on a host of issues, including:

Labour MP Gareth Thomas, who chairs the All-Party Parliamentary Group on Mutuals, said LV’s statement was ‘a fairly desperate effort to spin figures that members are already aware of’.

LV, formerly known as Liverpool Victoria, is a mutual – meaning it is owned by its 1.2m customers.

It was founded in 1843, offering ‘penny policies’ to give poorer families in Liverpool the chance to bury their dead with dignity.

Its mutual status means it is run entirely for members’ benefit, rather than to make money for shareholders, and that has been a key attraction for customers over the years.

But if LV is sold to Bain, as its board is hoping, the business will be stripped of its mutual status and taken over by a profit-hungry investor.

Members are being asked to vote on the deal – they have until December 8 to cast their ballot by post or online, or can do so during an online meeting on December 10.

The sale was thought up last year, after bosses employed consultants to run a strategic review. In an update to members yesterday, LV said the review concluded that the firm was a ‘sub-scale life and pensions business with an insufficiently strong capital structure’. 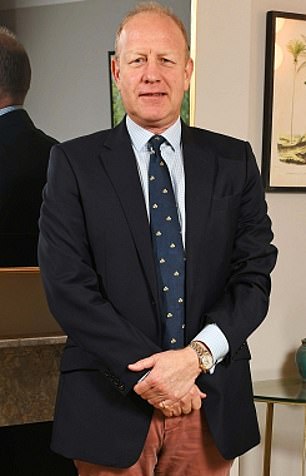 The review concluded that carrying on LV’s business as usual ‘was not fair for members’, because the firm would have had to use some of the money earmarked for their future payments to invest in its technology.

More than half of the 271,000 LV customers who hold so-called with-profits policies – meaning they share in the company’s fortunes – are due to see their policies mature over the next decade, at which point LV will have to pay up.

The firm claimed it was worried that if it used their money to invest, it would have to reduce their pay-outs as it would not have reaped the cash back in time.

But experts have challenged why LV did not plump for a rival offer from Royal London.

Royal London has urged LV boss Hartigan to reopen negotiations and even offered to construct a deal which would allow the firm to remain a mutual. LV has refused to communicate.

Peter Hunt, of mutuals consultancy Mutuo, said: ‘Hartigan says the Bain deal is the only way that keeps LV in business, but it’s also the only one that keeps him in a job. And if LV is a great British company, as he says, then why sell it to the Americans?

‘Getting information out of LV has been impossible. It’s like a Kafka novel.’

The Bain deal has attracted sharp criticism from members and experts, who worry that the US private equity shark will milk LV for money by slashing jobs and hiking prices. Members have been offered an ‘insulting’ £100 each to give up the company.

As he attempted to explain the strategic review yesterday, LV chairman Alan Cook said: ‘So that members can vote with the facts in front of them, we are showing the analysis we did and the conclusions we reached.

‘We urge members to vote on December 10 and vote in favour to protect their interests and the future of LV.’ 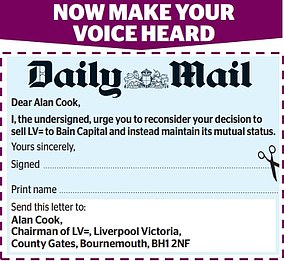