So Manchester City are through to the last 16 with a game to spare and the result, on paper, looks a strong one. Yet this was an inglorious progression rather than the procession anticipated.

Pep Guardiola – who has constantly talked up the need to ‘suffer’ during tougher group stages – knew they escaped. Lyon were alive, twice went ahead, and really ought to have been a couple of goals clear by half-time.

That City owned resolve to come away with a point should act as significant encouragement but this was not the same team to have won 12 of their last 13 since September’s defeat by Lyon. Back then Guardiola labelled his players embarrassing and, although he would never utter such disparaging remarks in public, the Catalan must have been searching for the same words in the dressing room. 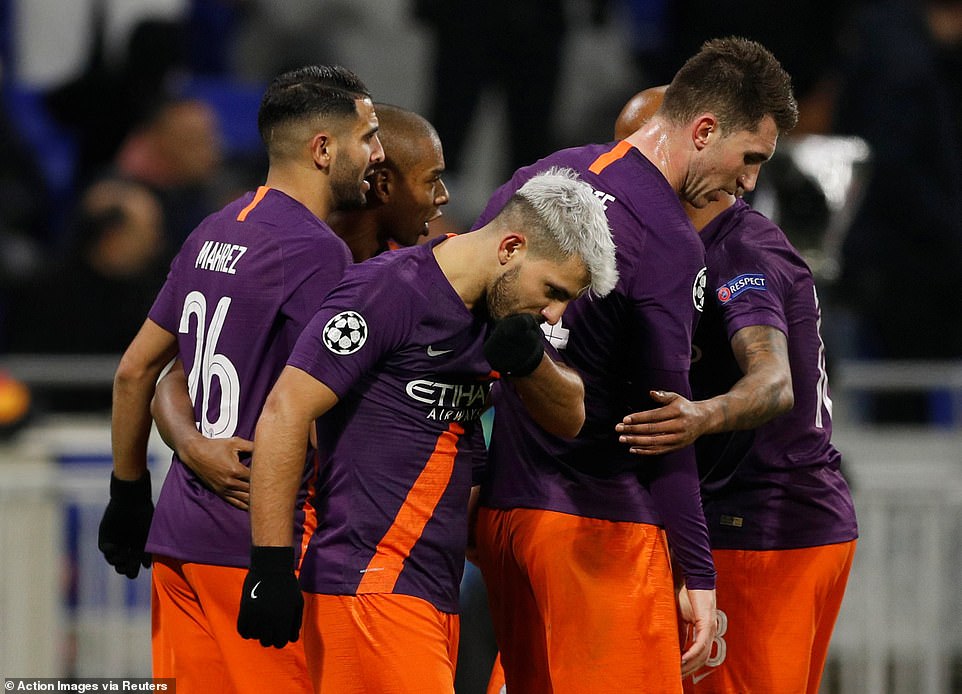 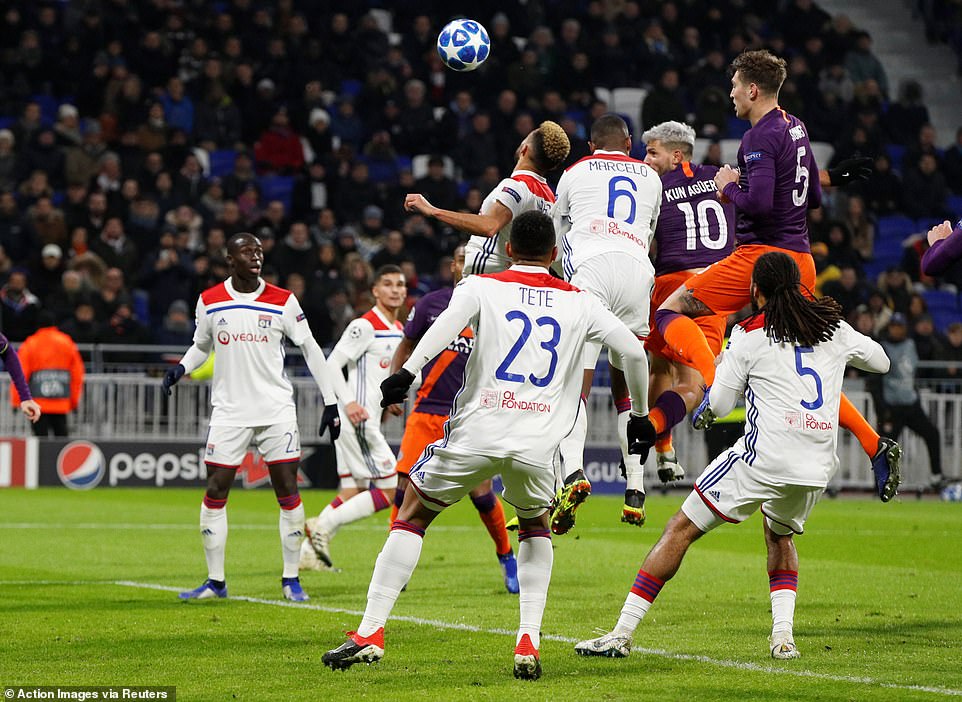 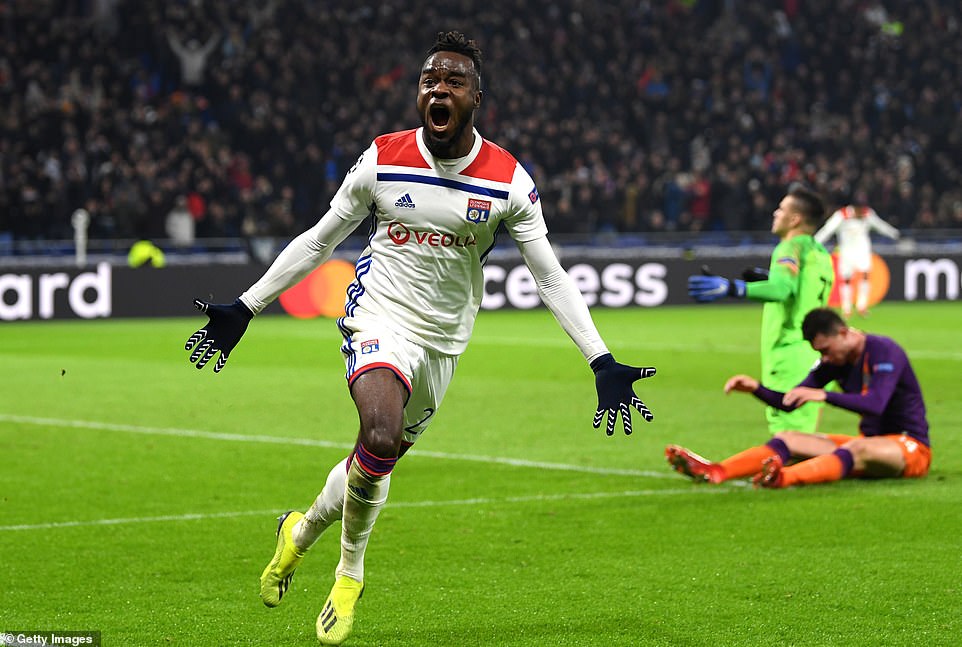 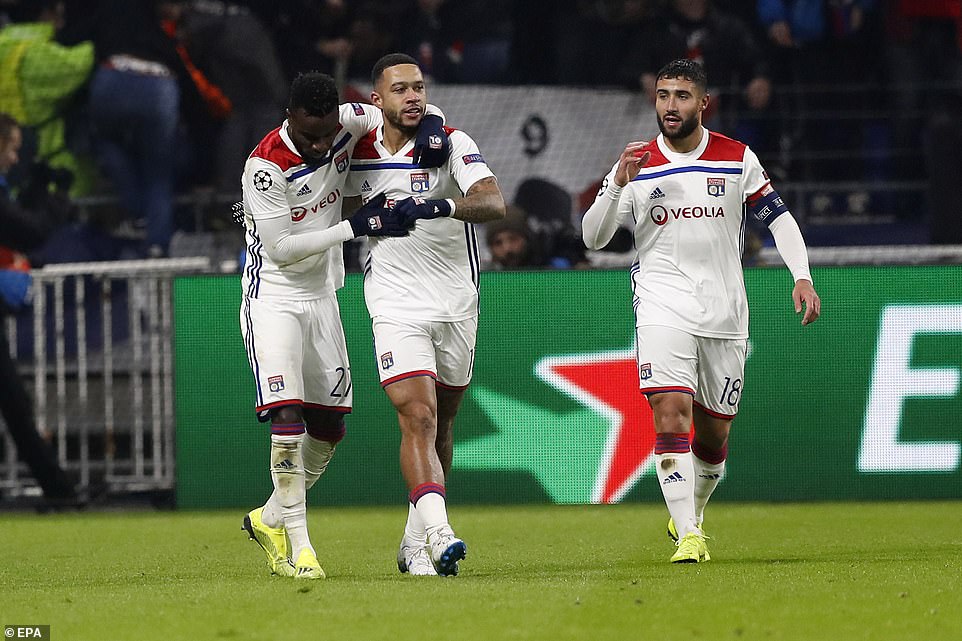 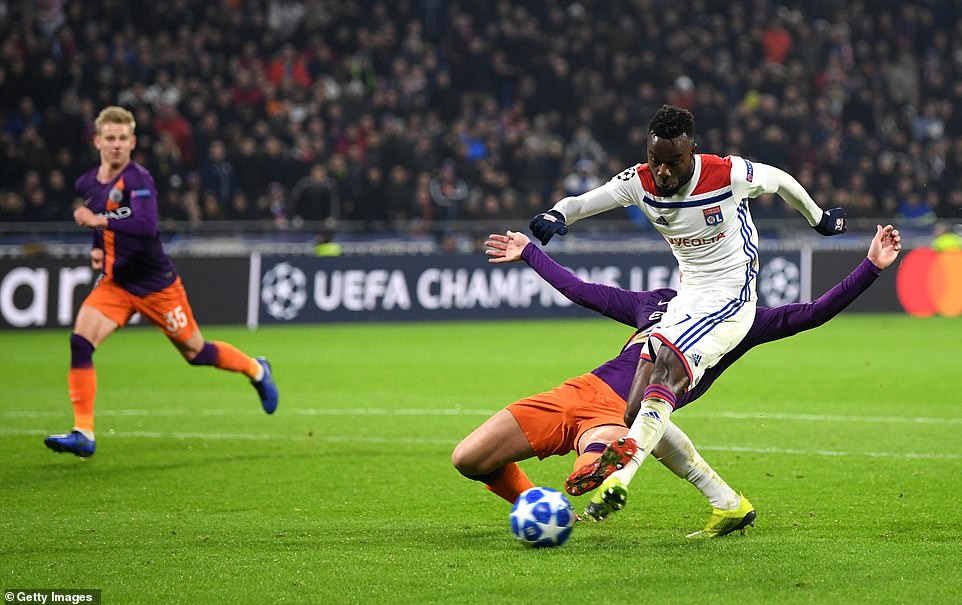 ‘Delighted,’ was his official assessment but City were shells, tactically disorganised, defensively dishevelled and ultimately left eastern France with a result they scarcely deserved.

Guardiola admitted that those detractors who cry financials to belittle City’s achievements would deem not lifting this trophy a failure and for so long on Tuesday night they looked far removed from potential champions.

Guardiola still needs to devise a way to combat teams in Europe who refuse to bow to City’s whim. There also remains a slight edge to Group F, with City requiring a draw against Hoffenheim in a fortnight to finish top.

‘Today the Champions League showed me again that it’s a different competition,’ Guardiola said. ‘The players are better. Here when you press they don’t lose the ball. The demand is so high.

‘People say it’s easy and you cannot imagine how confused they are about that. We’ll be there again in February: one more year for City is good news.’

Lyon are 15 points adrift of Paris Saint-Germain in Ligue 1 but did not play like that, raising their game against illustrious opposition they had already shown the continent how to beat this year.

There were issues everywhere on Tuesday night and the wisdom of shunting Raheem Sterling into central midfield, a position in which he has never operated before, was unclear. They lacked balance, with the industrious Phil Foden left chatting away to Brahim Diaz on the bench instead of affecting the result as many had hoped 24 hours previous given Guardiola’s glowing observations about the 18-year-old’s burgeoning talent. 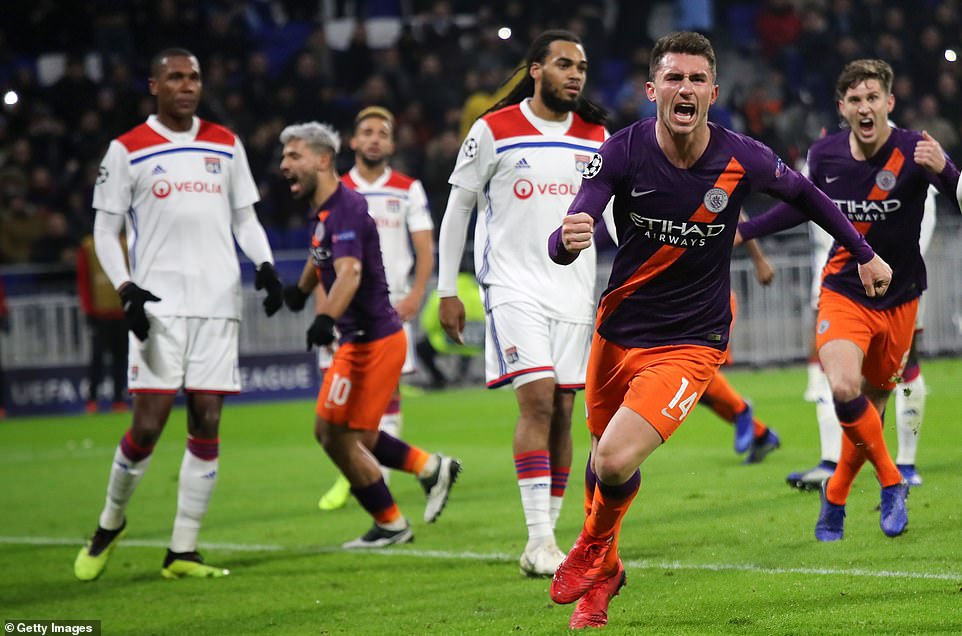 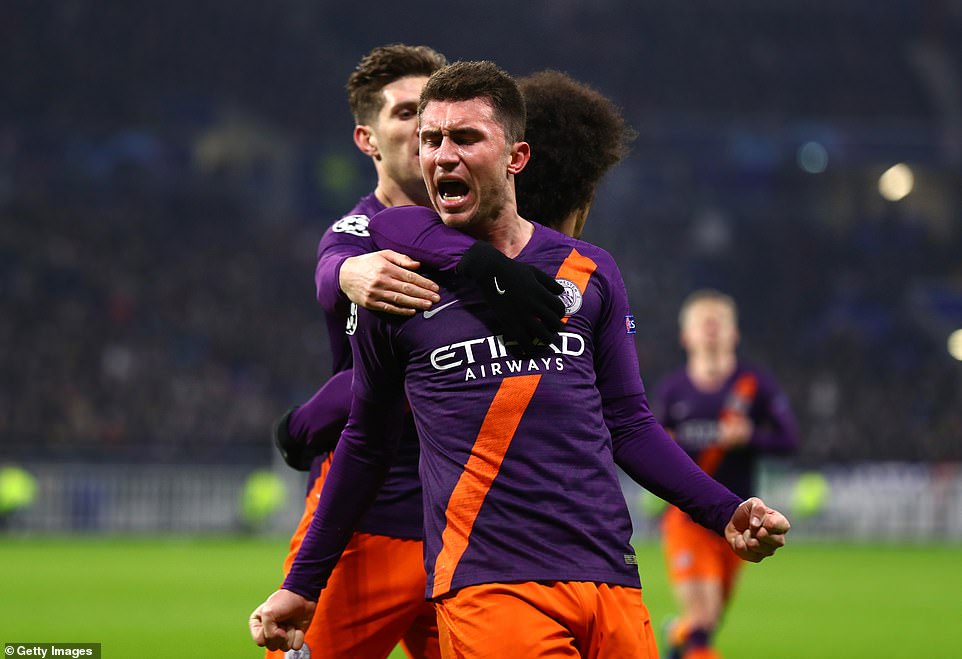 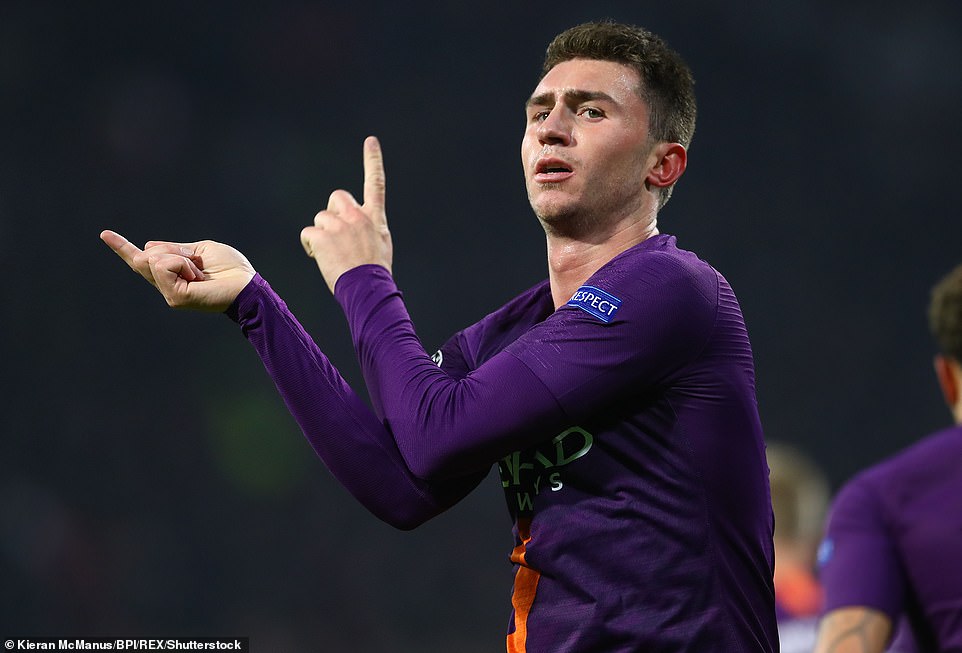 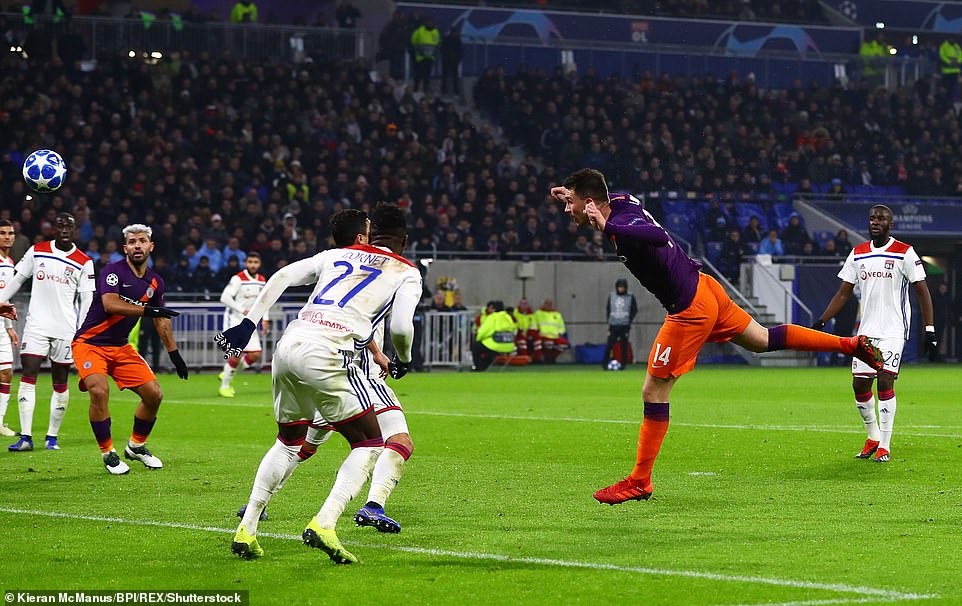 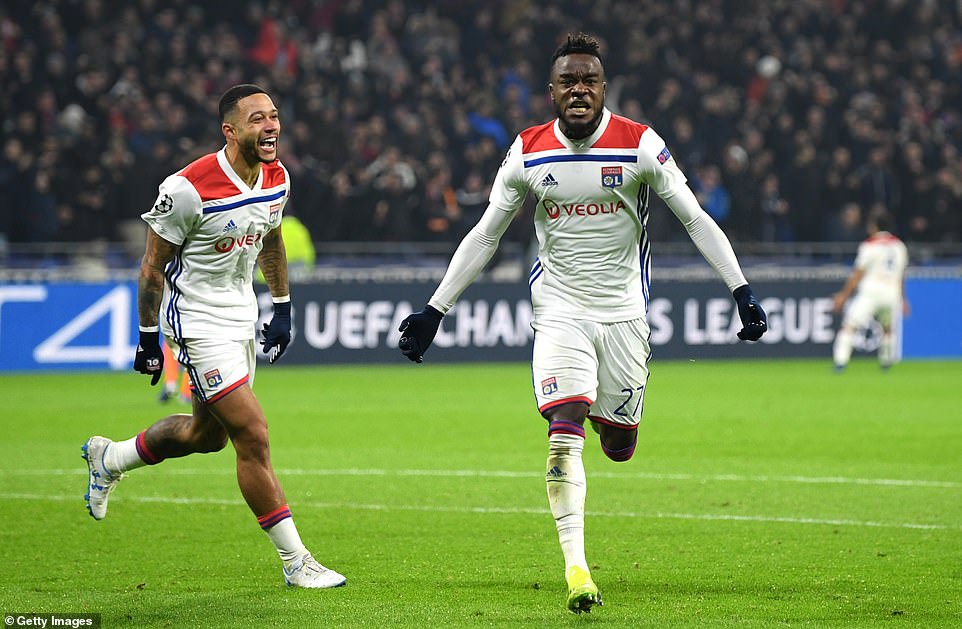 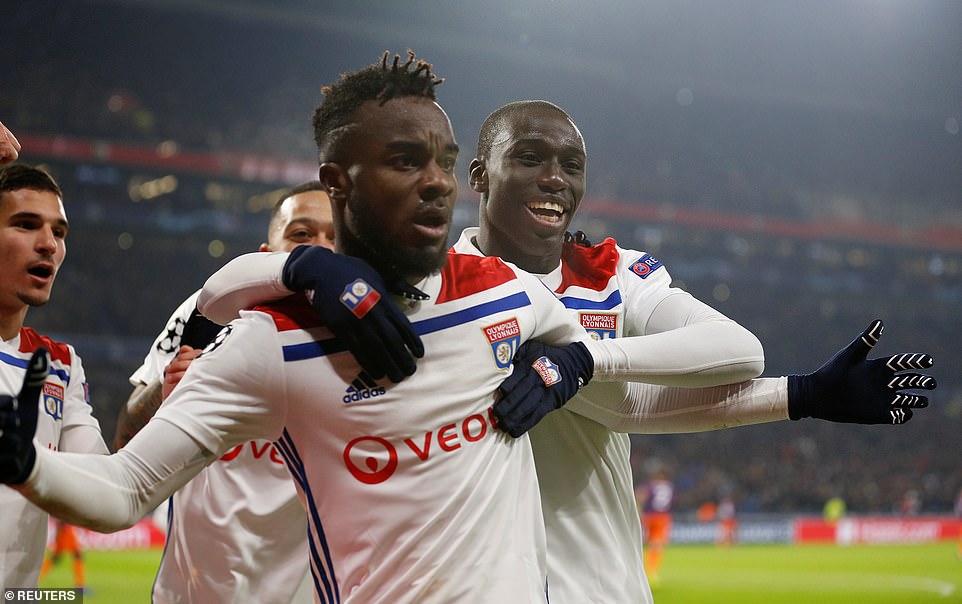 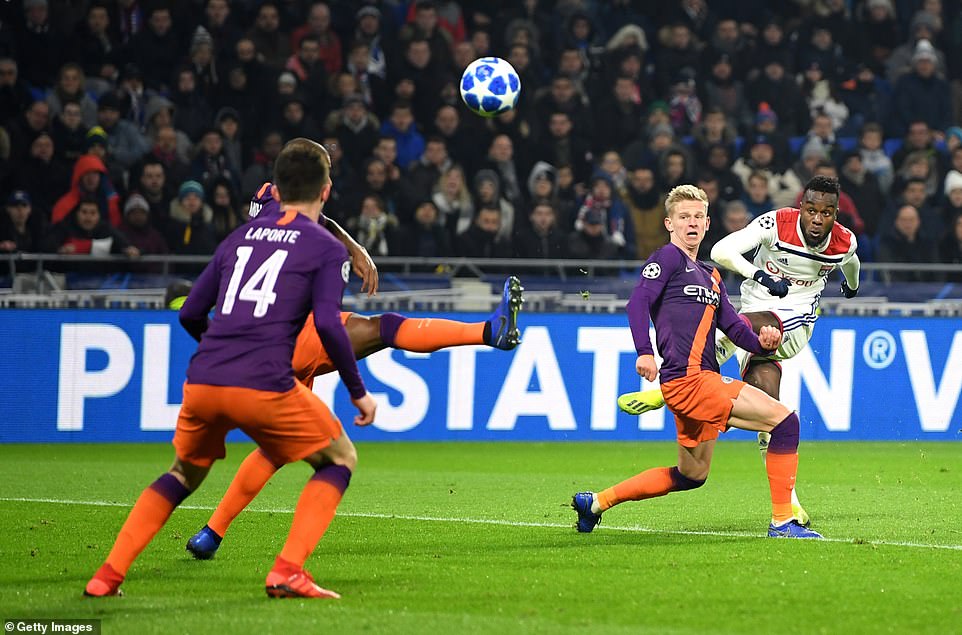 Cornet’s strike rocketed into the corner of the net, leaving Brazilian goalkeeper Ederson with no chance in the City goal 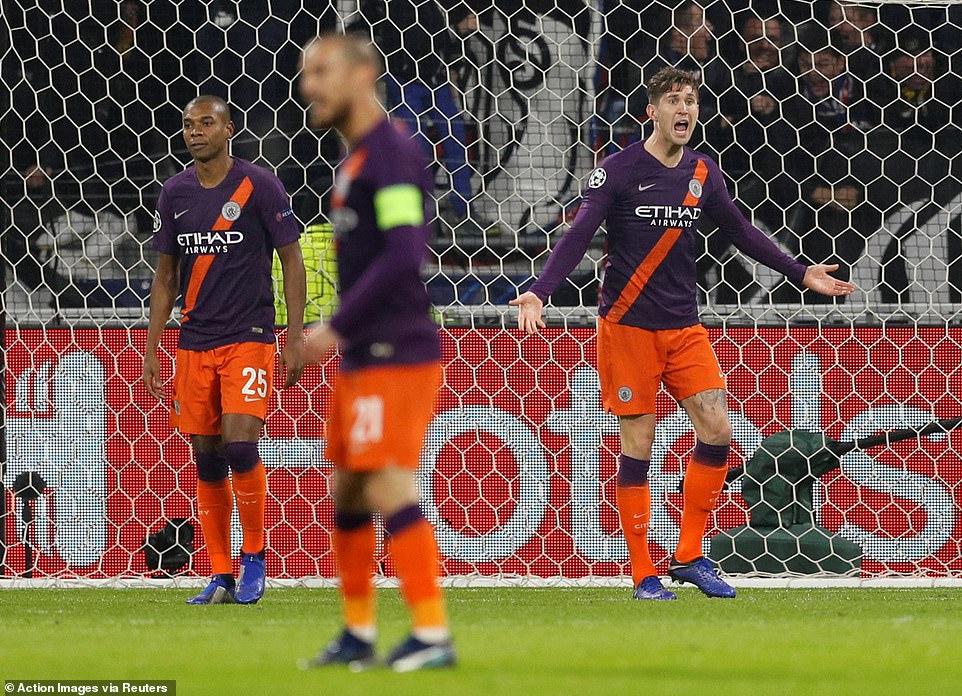 Guardiola’s decision to plump for Oleksandr Zinchenko over Fabian Delph was criticised and the Ukrainian gifted Maxwel Cornet far too much room 10 minutes after the break. Cornet shifted the ball on to his left and bent sumptuously beyond Ederson.

‘Every game I make mistakes and every game I make good things,’ Guardiola said. We had a lot of problems. We came here to win the game. That’s why I played more people with more quality in front. I don’t have any regrets.’ He suggested Foden might have found ‘this kind of game hard’.

Foden’s team-mates certainly did. Cornet had earlier rattled the bar with a volley from Memphis Depay’s cross, while twice fluffing his lines right in front of goal when presentable opportunities arose. Depay himself completely missed his kick at the back post with this goalless. Presumably the former Manchester United misfit’s five million Instagram followers can console him.

Riyad Mahrez had two efforts he might have done better with. City were not clicking, Sterling taking time to readjust to his new surroundings, unsure of quite when to go or stay and, frankly, unclear of the role’s demands through no real fault of his own.

Fernandinho and Sterling were both booked, Depay fired a free-kick over and there came a growing sense that Guardiola’s side were again really in a game against a courageously attacking Lyon. Cornet scored after 55 minutes – no less than Lyon deserved – before Aymeric Laporte equalised after Sterling’s free-kick was flicked on seven minutes later. 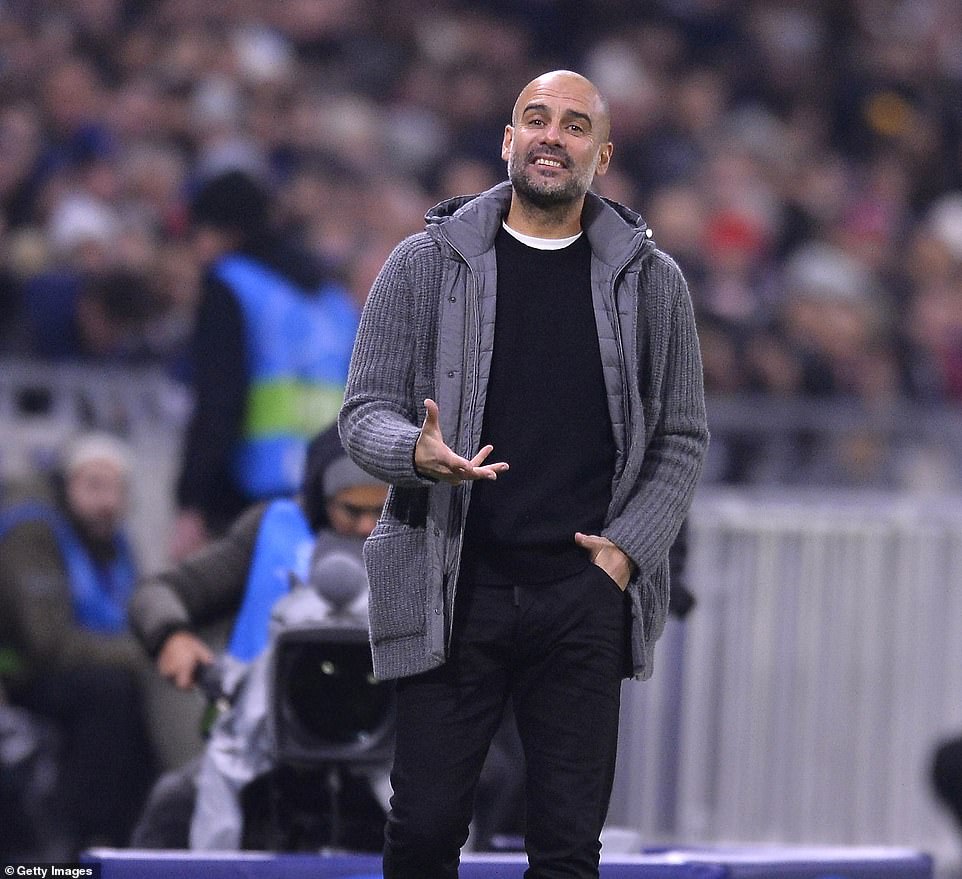 Pep Guardiola, who has been used to having things his own way at City, endured a tough night at the office on Tuesday 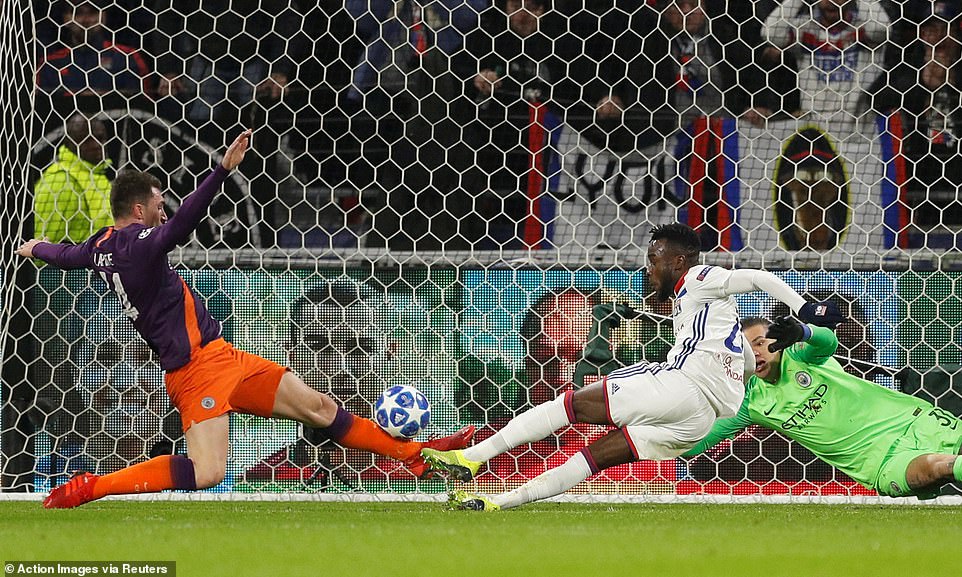 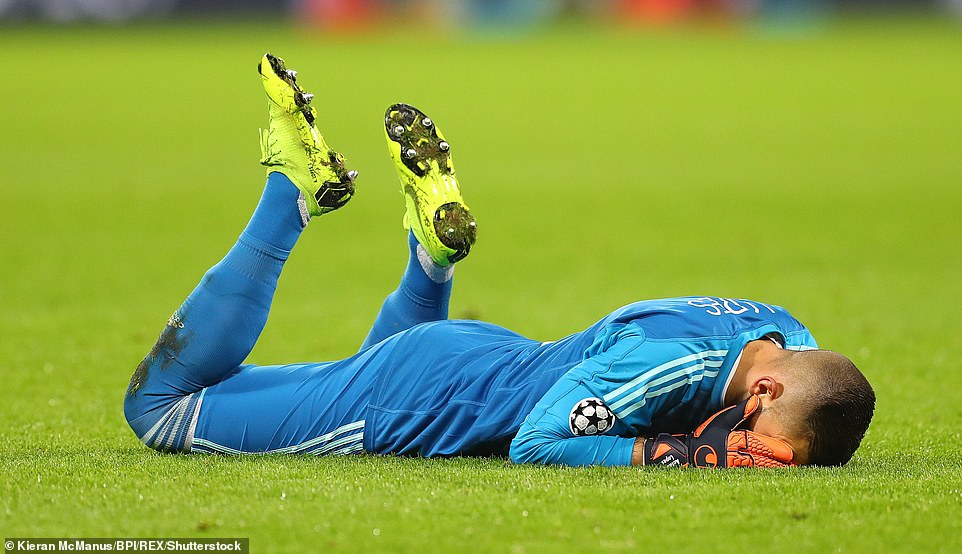 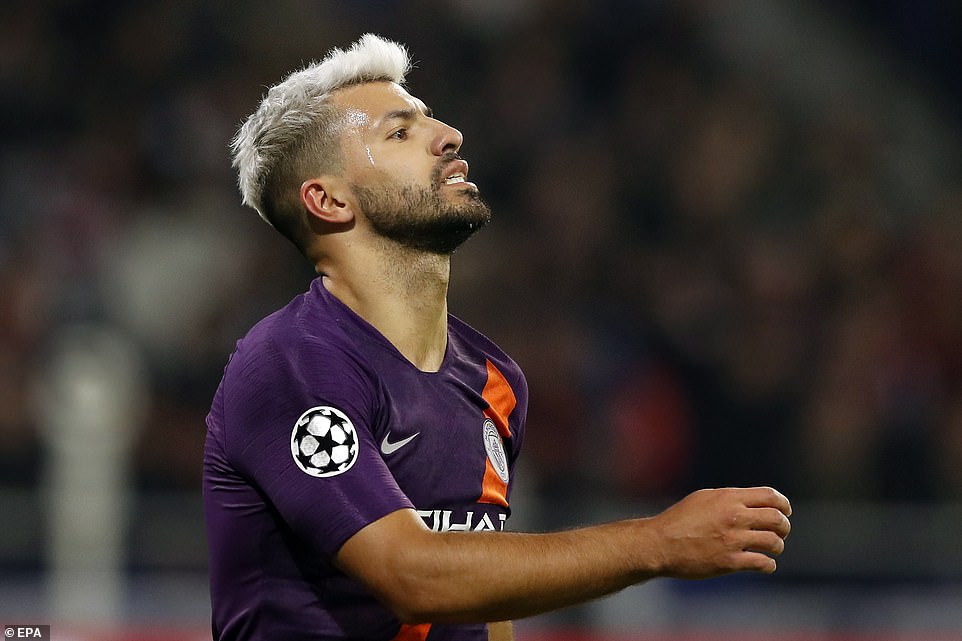 Laporte had earlier thwarted Cornet heroically, but the Ivory Coast international gave him the slip with nine minutes left before then sliding underneath Ederson. Remarkably, and completely at odds with their performance, City found a way back into the game seconds later. Sergio Aguero stole a march from a set piece and his header flew into the far corner.

‘That shows the character and belief in the dressing room. Important players come good at the right time,’ Kyle Walker said. ‘Lyon are technically good and quick and strong, that’s why they hurt us at the Etihad and that’s why we had point to prove.

‘There are still things we have to work on – it is completely different to Premier League. Still things we need to switch on to. But we’re through and hopefully we can get a good draw.’

That is in their hands. City have control of the group but never had this game under their spell. For Guardiola, that must be slightly concerning. 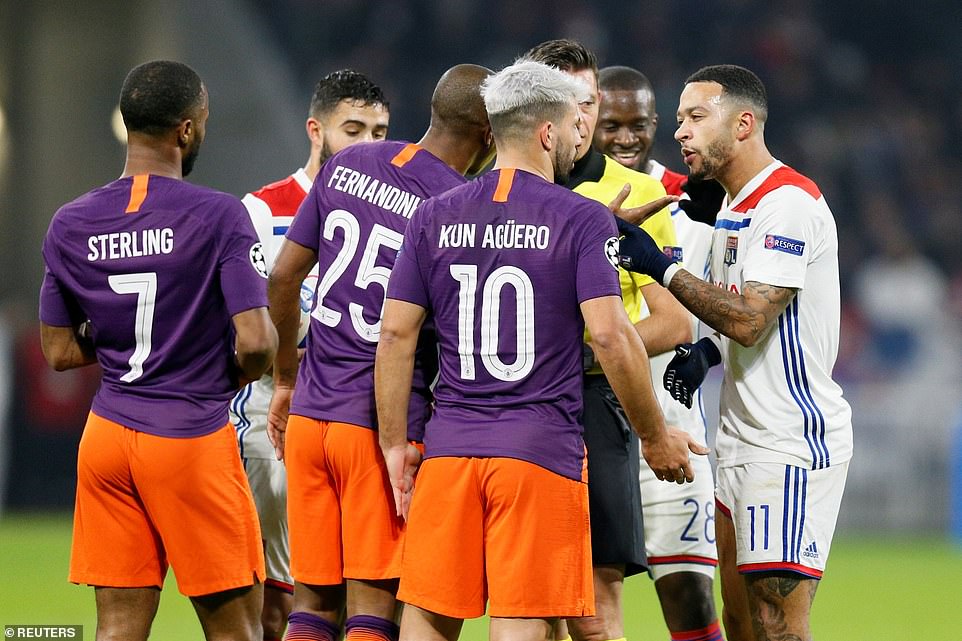 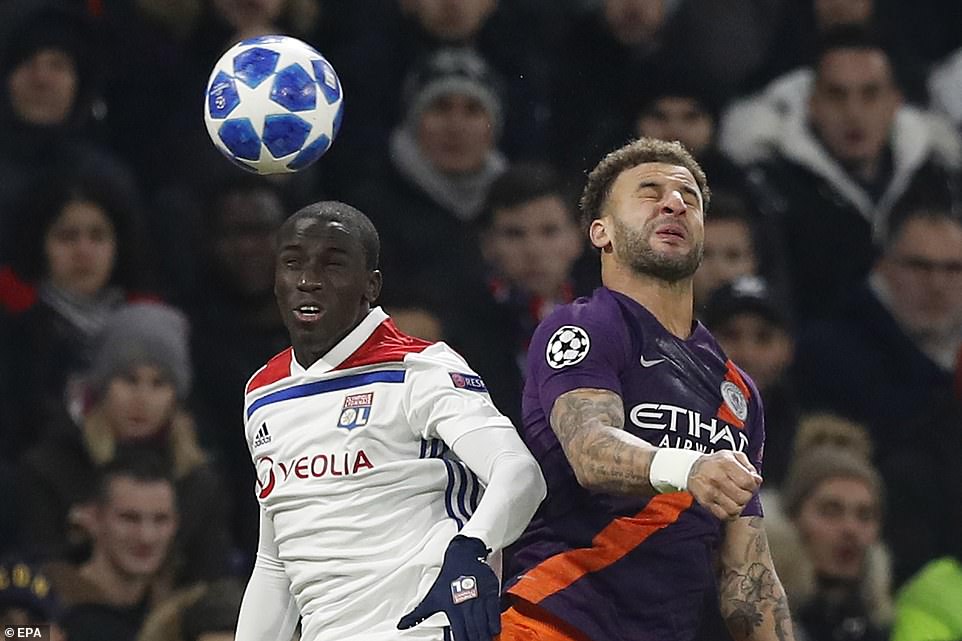 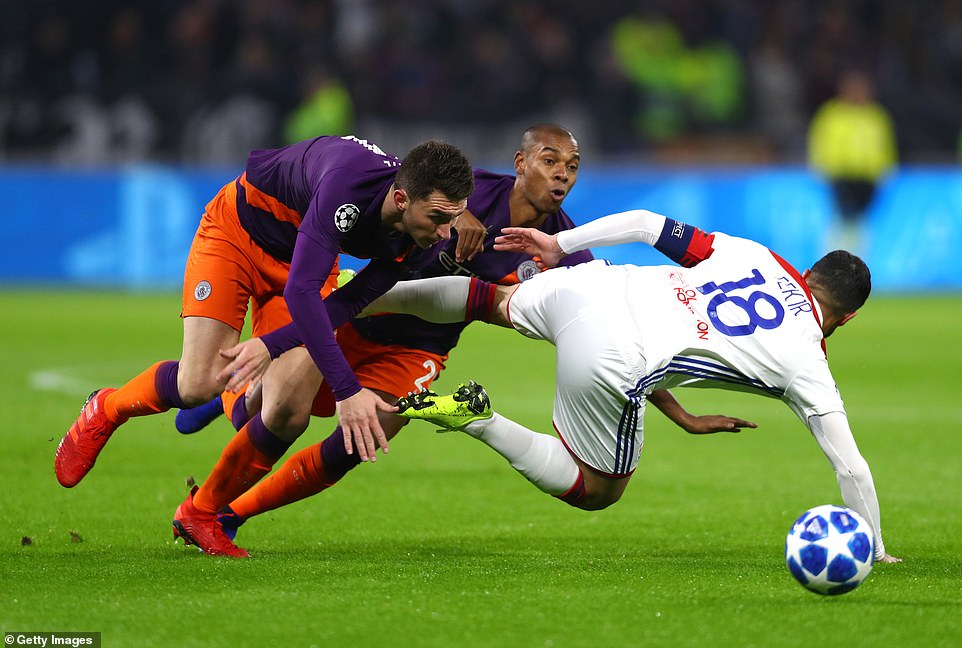 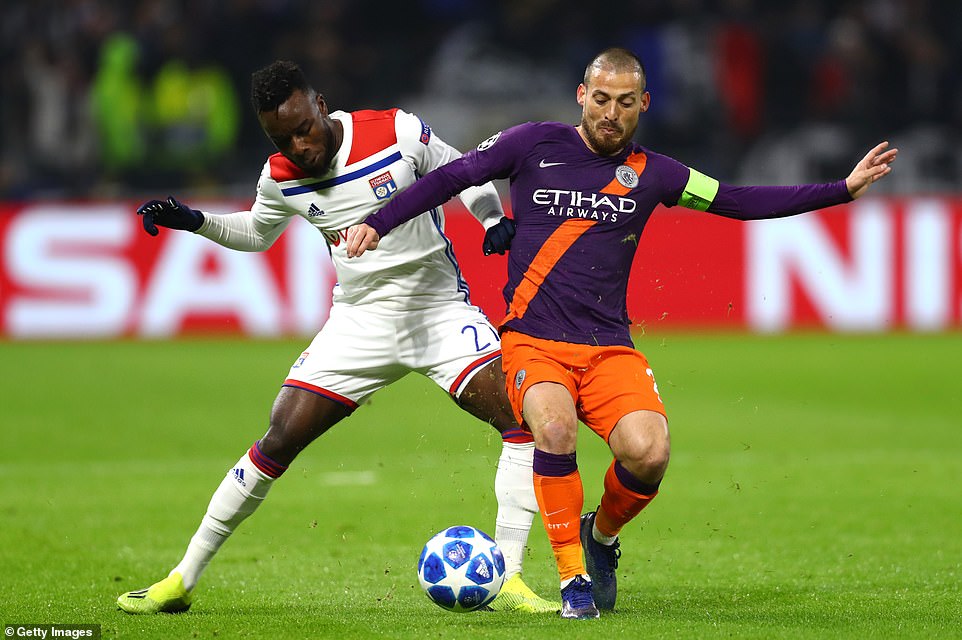