Stargazers will have especially dark skies to witness the annual Lyrid meteor shower on Tuesday as the show will coincide with a new moon.

The annual show will reach its peak on Tuesday, April 21 with 10 to 15 meteors per hour and the best time to watch is between midnight and dawn.

It’s the first shower since early January so even though it’s a relatively calm show compared to others, it’s welcomed by meteor-watchers and is the oldest recorded meteor-shower – with the first sighting from ancient China in 687 BC.

To get the best view of the falling debris you will need to find a dark sky area during the peak night on Tuesday into Wednesday.

The Lyrid may not be the brighest of meteor showers, but it is one of the oldest observed and will be most visible on Tuesday April 21

Last years Lyrids happened at the same time as a bright waning gibbous moon — a phase that comes very close to being a full moon.

Every year, the Earth intersects with Thatcher’s dusty tail and particles of the comet are seen streaking through the sky where the usually burn up.

While meteor showers create streaks in the sky that can be seen on Earth from miles away, the meteoroids that cause them are actually quite small.

Some meteors leave brilliant trails behind them in the form of ionized gas.

‘Meteor showers on Earth are caused by streams of meteoroids hitting our atmosphere,’ explains an interactive website that plots all the meteor streams that orbit the sun.

‘These meteoroids are sand- and pebble-sized bits of rock that were once released from their parent comet.

‘Some comets are no longer active and are now called asteroids’.

To see the shooting stars you will need to be in an area of low light pollution with a clear sky with minimal cloud cover.

According to astronomers, optimal viewing is in the few hours before dawn no matter where you are in the Northern Hemisphere. 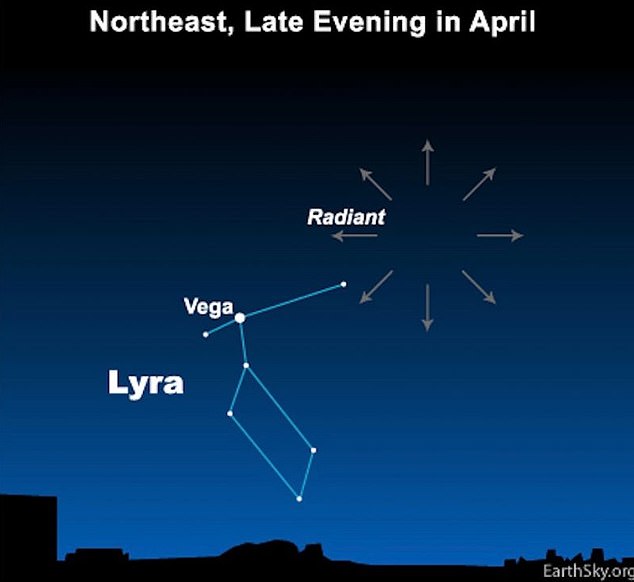 This is the point in the sky from which the meteors become visible to us on Earth.

In some cases, meteors have been observed passing through the sky at a rate of 100 every hour but on average the meteors come by at about 15 to 20 per hour.

Though the Lyrid aren’t the brightest shower observed by humans — the Perseuds and Geminids both outshine them – it is one of the oldest.

The shower on May 22, 687BC was recorded in Zuo Zhuan, which describes the shower as ‘On day xīn-mǎo of month 4 in the summer (of year 7 of King Zhuang of Lu), at night, fixed stars are invisible, at midnight, stars dropped down like rain.’