A man is fighting for his life after a ‘multi-vehicle crash’ on the M1, which closed a nine-mile stretch of road for eight hours.

The motorway was closed between junctions 28 and 26 southbound near Nottingham following the crash at 5.40am that reportedly involved a lorry and another vehicle.

A 48-year-old man was taken to hospital with serious injuries where he is still in a critical condition.

Another man, 27, was arrested on suspicion of dangerous driving and also received hospital treatment for his injuries.

Motorists complained of lengthy delays today after a serious crash closed the M1 near Nottingham. This CCTV image was taken on the M1 southbound near junction 29 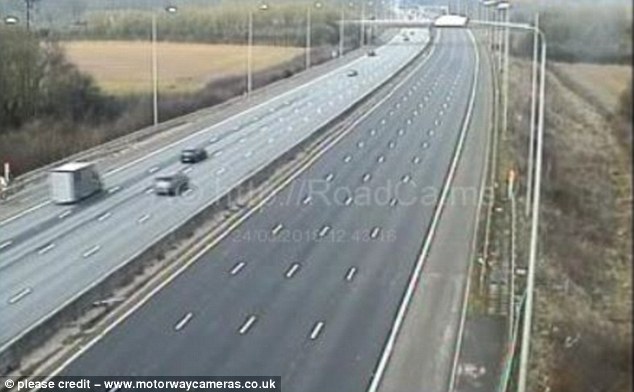 The scene on the M1 southbound today after a serious, multi-vehicle crash caused it to shut near Nottingham

Frustrated motorists took to Twitter to vent their anger at the delays.

Jo Bridge tweeted: ‘Any news on the opening? We’ve been stuck for 2.5 hours and moved one mile!’

Highways East Midlands replied saying debris were being cleared and the recovery was under way before confirming it was back open at around 2.15pm.

Officers from Nottinghamshire and Derbyshire police were at the scene as well as officials from Highways England.

The road re-opened at 2.15pm this afternoon after an eight-hour closure. 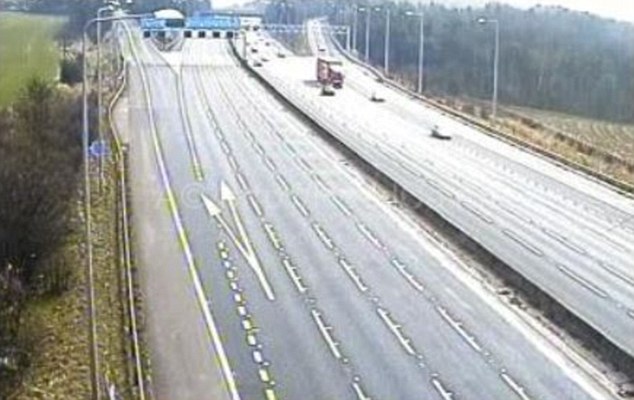 The motorway was closed between junctions 28 and 26 southbound near Nottingham following the incident. It has since re-opened

A Nottinghamshire Police spokesman said: ‘The M1 southbound between J28 and J26 has been reopened following a serious collision at approximately 5.40am this morning (24 March 2018).

‘A 48-year-old man was taken to hospital with serious injuries and remains in a critical condition.

‘A 27-year-old man has been arrested on suspicion of dangerous driving. He is receiving treatment in hospital but remains under police supervision.

‘The incident was responded to by ambulance and fire crews as well as officers from neighbouring forces.

‘On arrival officers found members of the public coming to the aid of those involved and we extend our thanks to them.

‘Investigators are urgently seeking information and crucially any dash camera footage of the incident. If you think you can help call 101 quoting number 142 of 24 March 2018.’