A dangerous driver brandished a baseball bat out of his van window and repeatedly swerved between lanes to intimidate another motorist in a shocking road rage spat.

Joshua McKenzie, from Kenley in Surrey, undertook another vehicle while driving his blue Mercedes Sprinter van on the M23 northbound in July 2017.

At one point the victim, who was driving a Vauxhall Corsa, had to lower their speed to 27mph to avoid a collision with the van.

McKenzie also made a hand gesture at the motorist and brandished a baseball bat out of his van window.

Joshua McKenzie, from Kenley in Surrey, repeatedly swerved between lanes on the M23 northbound, forcing a motorist to slow down to just 27mph to avoid a collision 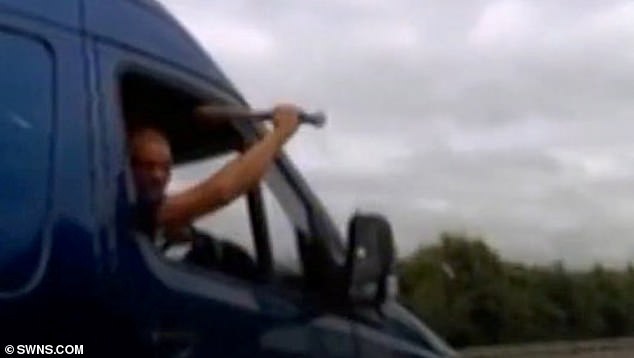 The Corsa had been travelling in lane three at its restricted speed of 70mph when McKenzie approached in his van from behind.

McKenzie flashed his lights but the Corsa was initially unable to manoeuvre to lane two due to other traffic, which led to his extreme reaction.

The Corsa driver reported the incident via Operation Crackdown.

McKenzie, a building labourer, was sent a Notice of Intended Prosecution (NIP) but no reply was received.

Following further enquiries, he later confirmed he was aware of the incident, but he denied the allegations. 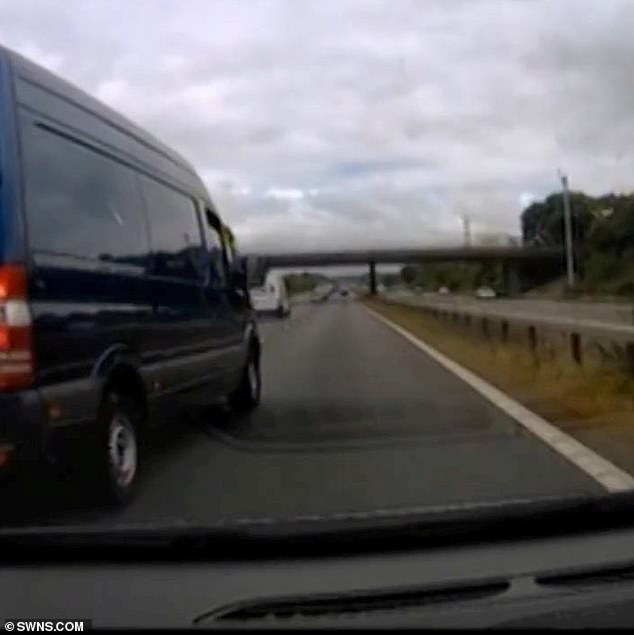 However, he eventually admitted the offence of dangerous driving, and he was sentenced to nine months’ imprisonment, suspended for 18 months at Lewes Crown Court.

He was also disqualified from driving for 12 months, ordered to carry out 180 hours of unpaid work and must pay a £140 victim surcharge.

He must also take an extended re-test if he wishes to drive again.

Sergeant Phil Badman, of the Sussex Roads Policing Unit, said: ‘This is a clear case of dangerous, irresponsible and intimidating behaviour, and there is no place for such actions on our roads.

‘Thankfully no one was hurt on this occasion, and we were able to bring the defendant to justice after the victim reported the incident to us via Operation Crackdown.

‘Operation Crackdown is an online platform where you can report incidents of dangerous of antisocial driving. Each report will be fully investigated and, where necessary, we may pursue criminal proceedings.’