This is the shocking moment a Waitrose lorry caught fire on a busy motorway, causing thousands of drivers to be stuck in two-hour queues in stifling 83F heat.

Holidaymakers hoping for a prompt getaway ahead of this weekend’s anticipated 88F heatwave endured lengthy queues on the motorway after the lorry’s cab caught fire, leaving the authorities with no choice but the close both the east and westbound carriageways.

In the 20-second clip, the driver and several other motorists slowly approach the blazing remains of the vehicle, after there were several explosions from gas cylinders on board.

The lorry’s entire cab and front end of the trailer is entirely engulfed in flames and plumes of black smoke can be clearly seen bellowing out.

As the driver reaches the front of the HGV, the raging flames can be seen crawling up to five metres high. There were no reported injuries. 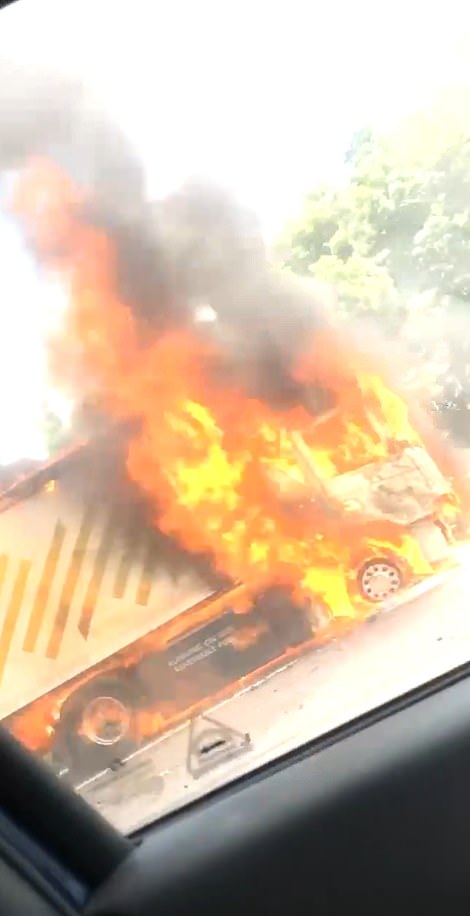 In the 20-second clip, the driver and several other motorists slowly approach the blazing remains of the vehicle. The lorry’s entire cab and trailer is entirely engulfed in flames and plumes of black smoke can be clearly seen bellowing out 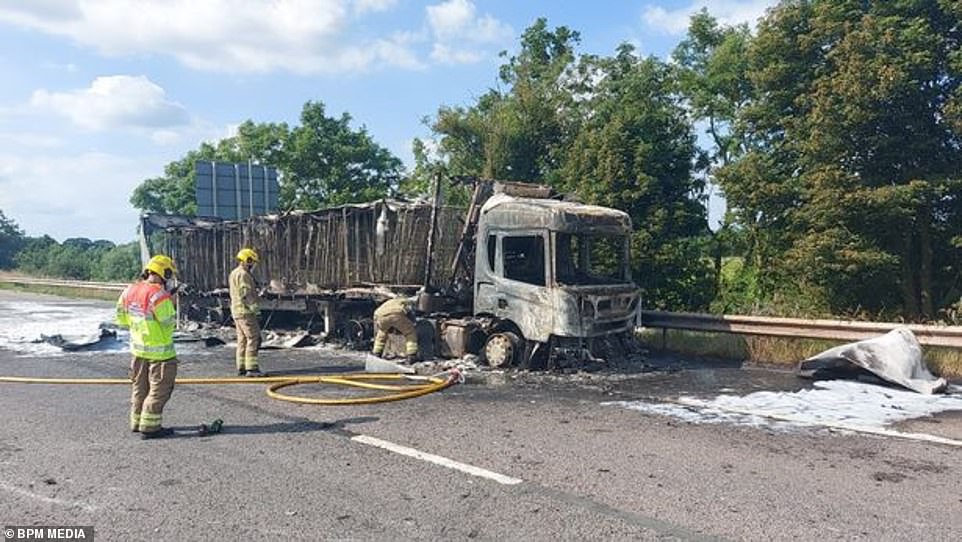 Thousands of holidaymakers were met with misery as traffic came to a standstill near Swindon earlier today after a lorry fire forced the closure of the M4 in both directions.

Both the eastbound and westbound carriageways between J14 and J15 were closed following the lorry blaze.

Travellers were seen getting out of their cars and sitting with their boots open or on the central reservation amid the standstill – despite advice from authorities.

In an incident report posted after the fire, Dorset & Wiltshire Fire Service reported there were ‘several explosions from gas cylinders on board’ the lorry.

Millions of people are expected to head to beaches and parks this weekend, with experts predicting sizzling temperatures that could peak at 88F on Sunday and Monday.

A Level two-heat health alert has been issued across the majority of England, with Public Health England urging people to keep cool and support those at risk. 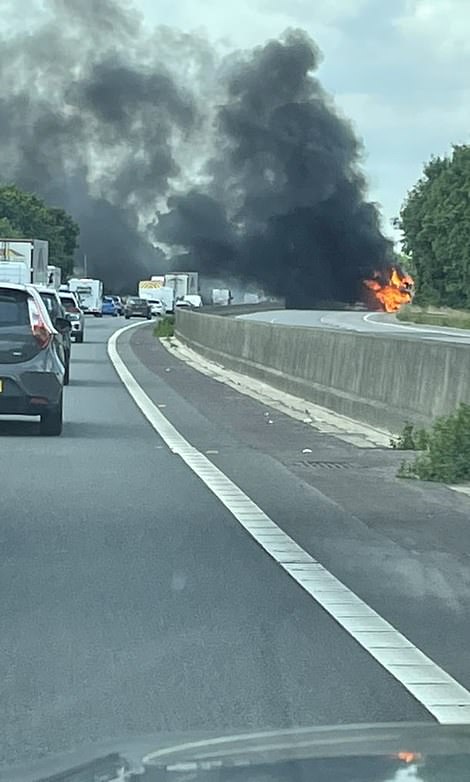 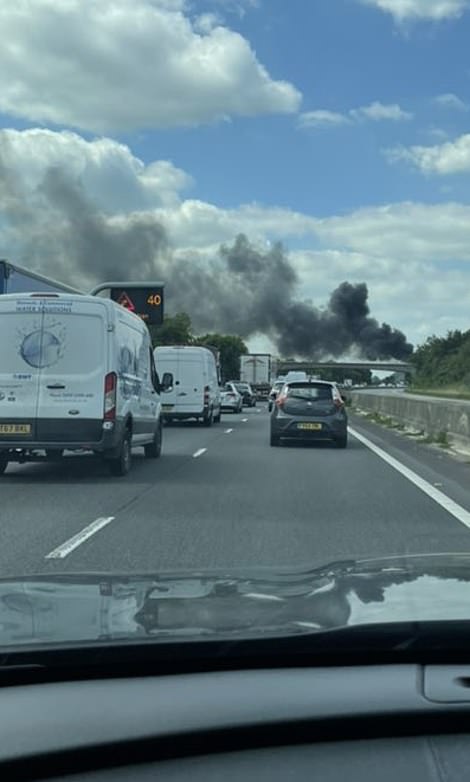 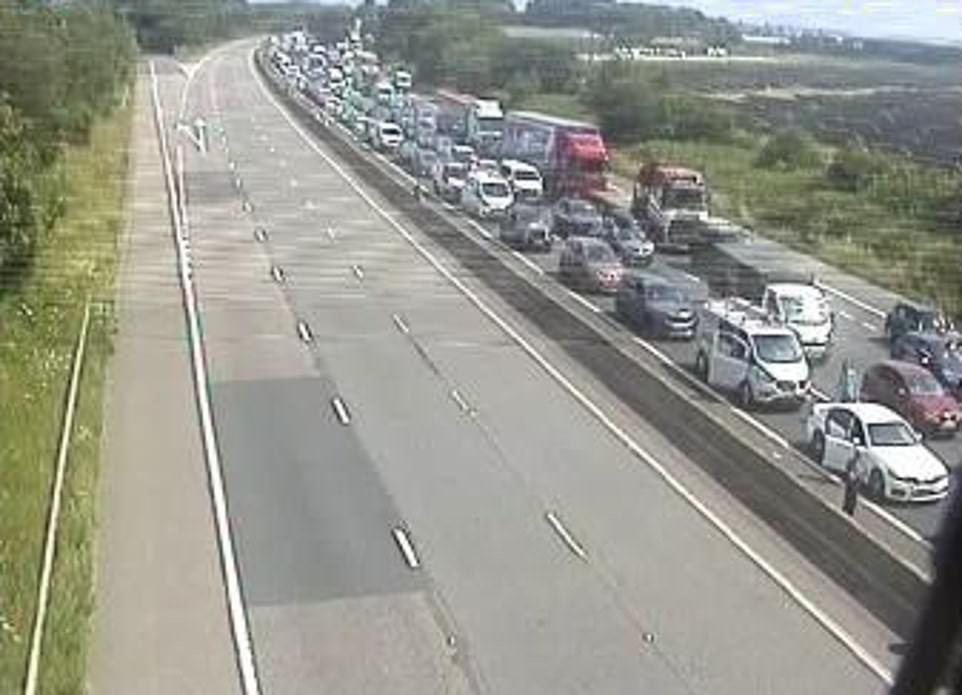 After reports of the lorry inferno spread, Highways England took to Twitter to say: ‘Please approach the area with caution and if you are in the stopped traffic please do not leave your vehicles.

‘Due to the nature of the fire and the contents of the lorry we are looking to start installing full closures of the M4 in both directions between J14 and J15.

‘If you are in the trapped traffic please bear with us, we will work to get you moving soon.’

In one of the latest updates, at 3.55pm, traffic monitoring site Inrix said: ‘M4 in both directions closed, queueing traffic due to lorry fire between J14 A338 (Hungerford) and J15 A346 Marlborough Road (Swindon East). 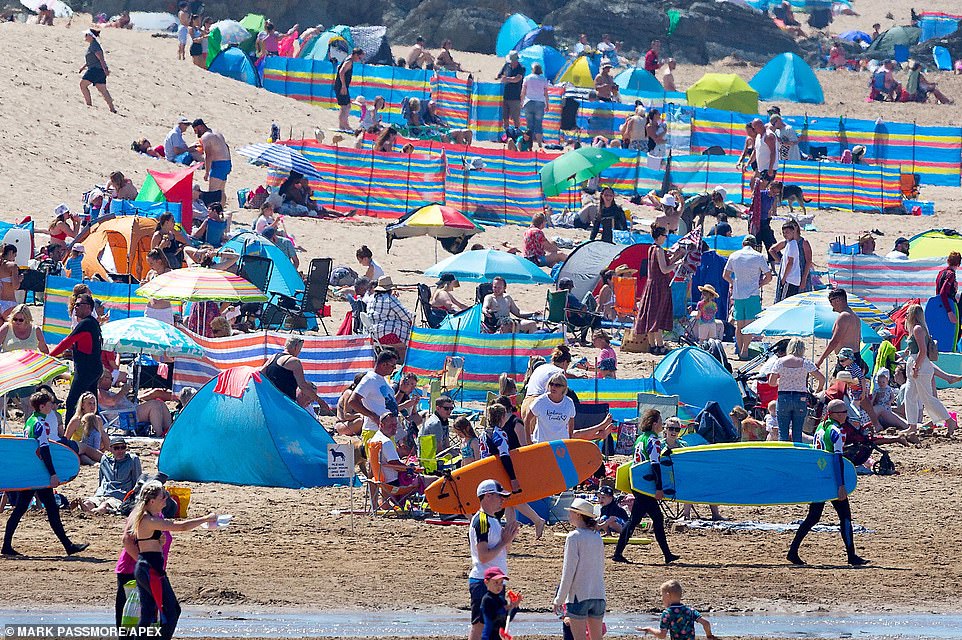 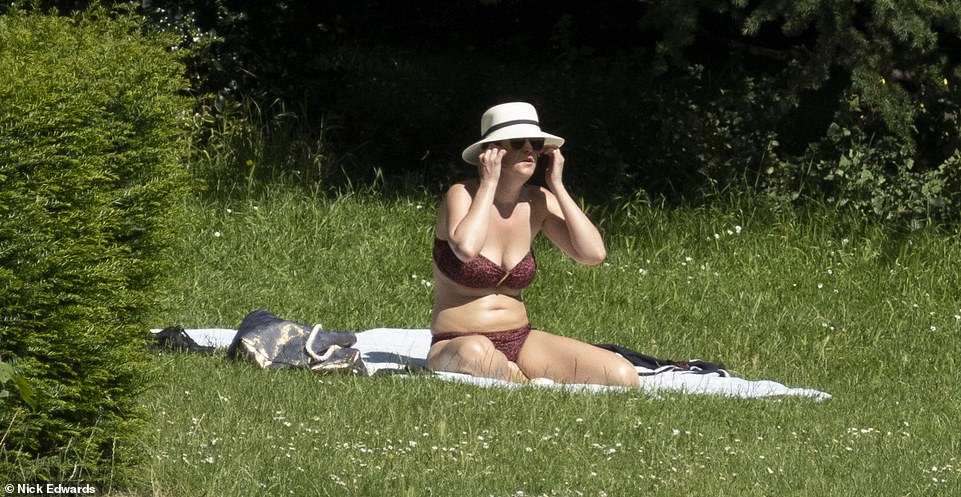 A sunseeker relaxes in the sunshine and warm weather in Battersea park, London, this morning at the start of a weekend of scorching temperatures 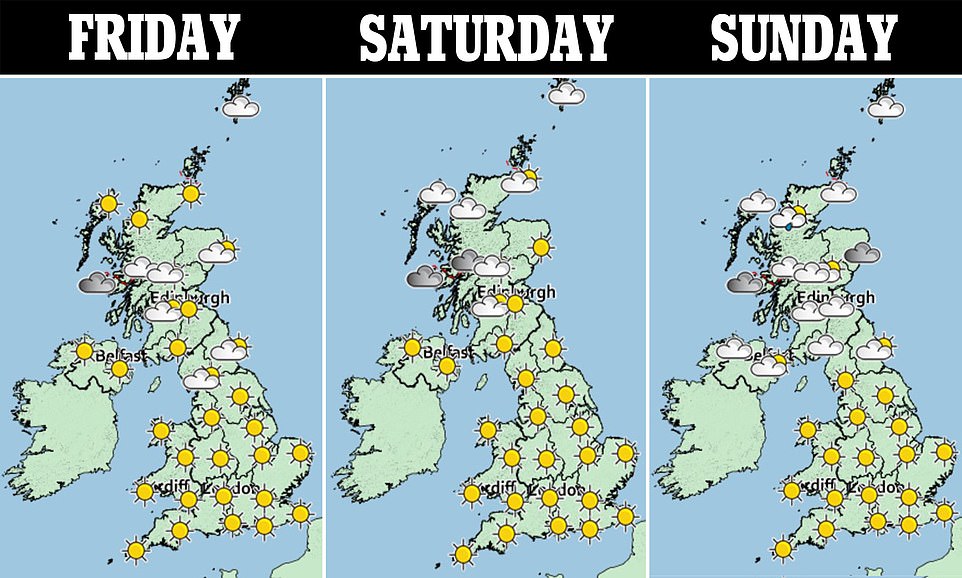 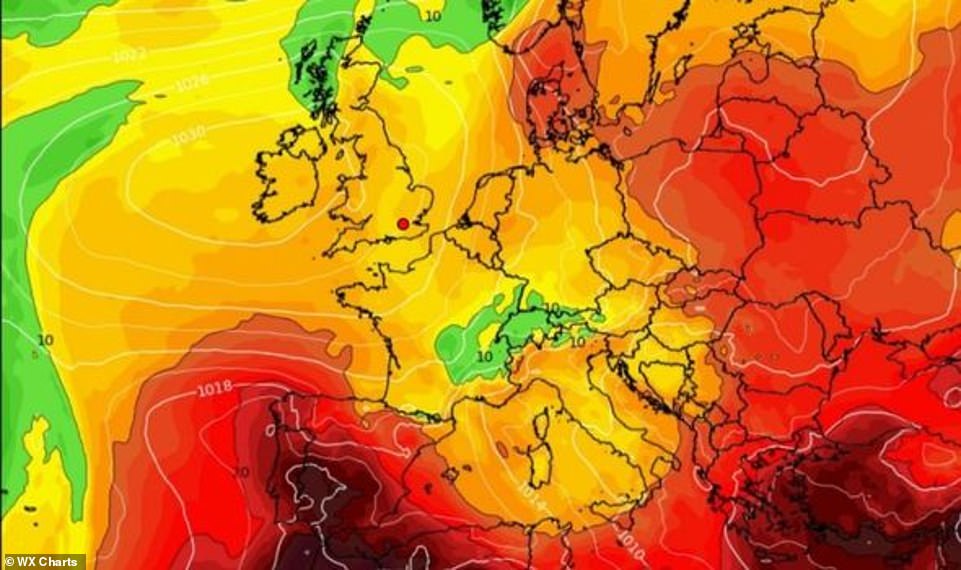 A graphic shows how a sweltering African plume of heat will make its way across the continent this weekend, bringing high temperatures to much of the UK

Health experts are warning the elderly and vulnerable to stay out of the sun this weekend, with a heatwave expected to bring scorching temperatures of 88F.

Today was the hottest day of the year in both Scotland and Northern Ireland, with 79F recorded in Aberdeen and 80F in Killowen.

The highest temperature anywhere in the UK today was in Pershore, Worcestershire, where it reached heights of 82.8F – just shy of the year’s current record, 85.5F in London’s Bushy Park on June 14.

And meteorologists predict Britain will sizzle even further on Sunday and Monday in particular, but the mercury is likely to remain around the 77F mark for the rest of the month.

The soaring temperatures are created as a result of an extension of the Azores high – an African plume of heat that is making its way across Europe over the coming days. 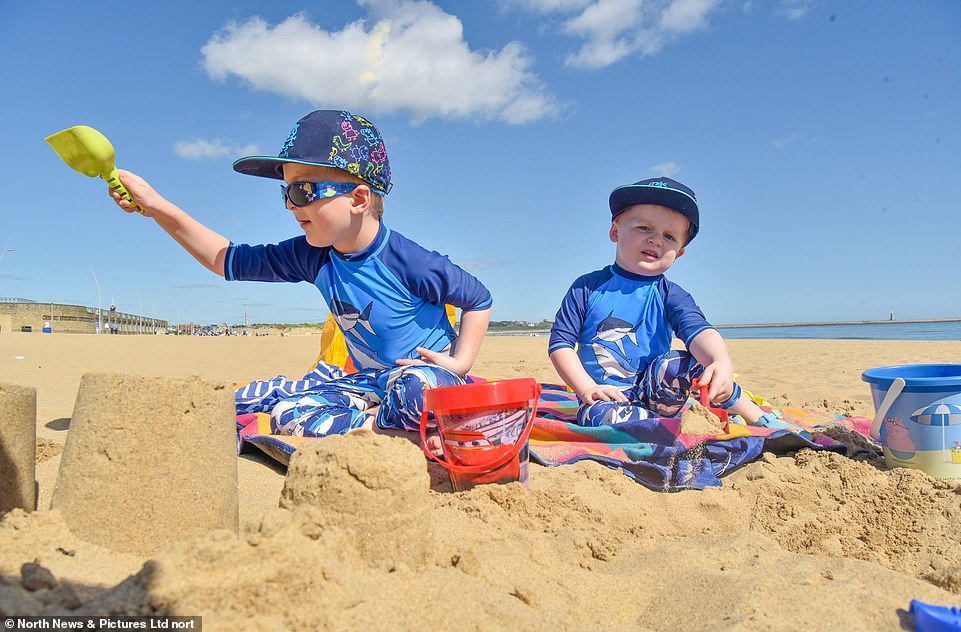 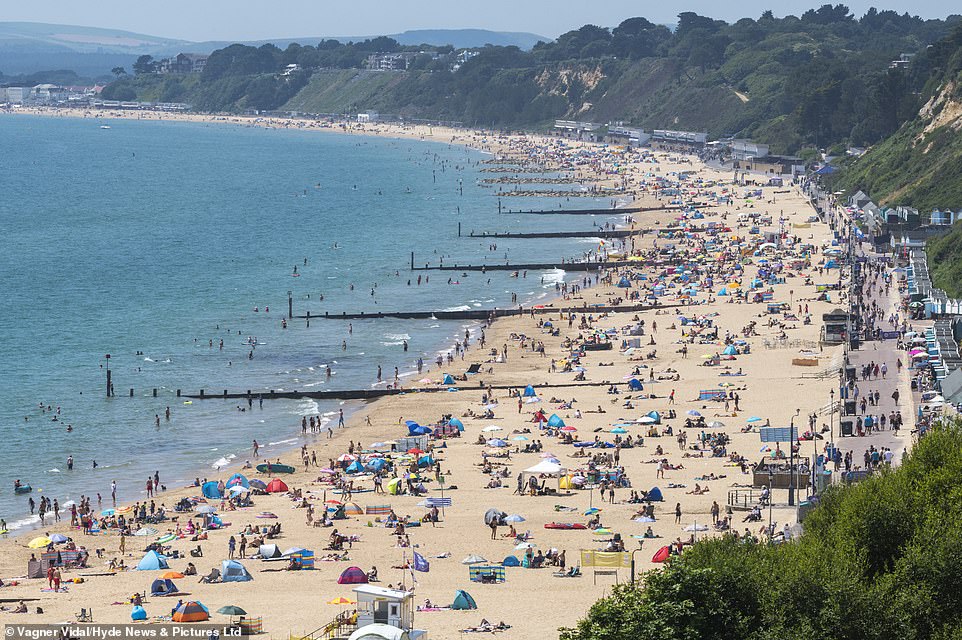 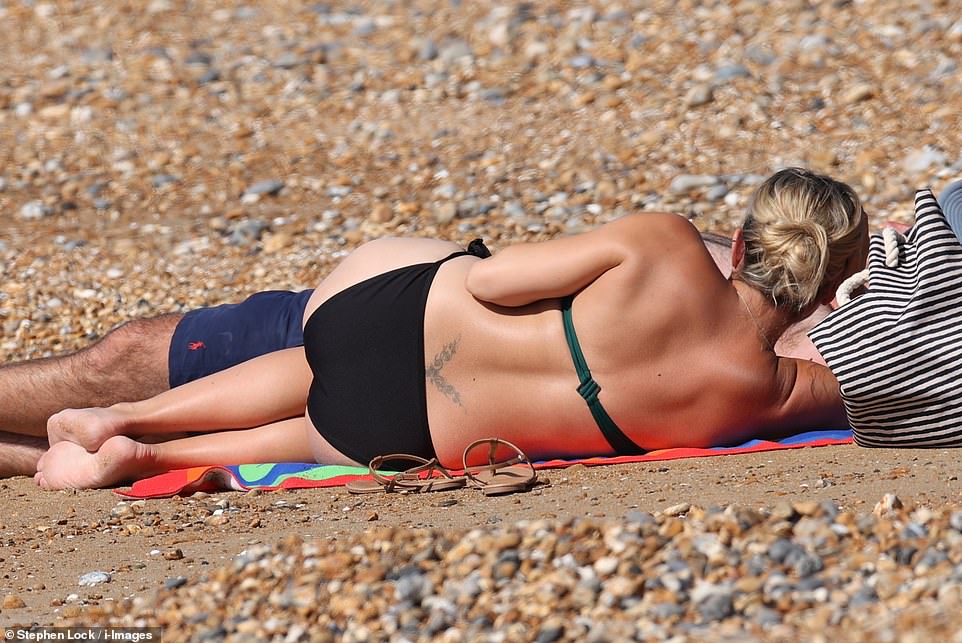 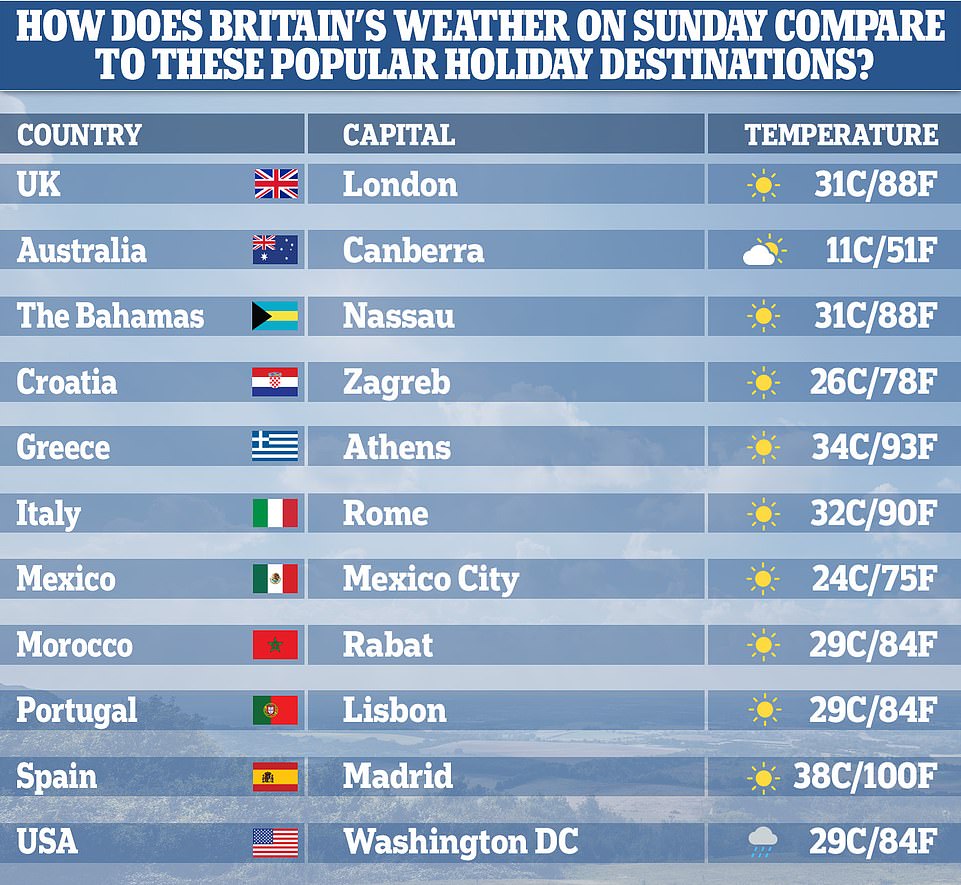 While millions will flock to beaches and parks around the country to soak up the sun, Public Health England (PHE) has issued a heat-health warning, urging the public to take measures to keep cool and support those who may be at risk in the warm weather.

Will Lang, head of civil contingencies at the Met Office, added: ‘Across most parts of the UK we’re expecting to see temperatures building, reaching heatwave thresholds across the majority of England over the weekend.

‘High temperatures will remain a feature of the forecast until Tuesday, when fresher conditions arrive curtailing heatwave levels.’

Alex Burkill, a meteorologist at the Met Office said the level two heat-health alert covers every part of England excluding parts of the North East, the North West and London and is due to last until Tuesday.

He said the highest temperatures will be ‘widespread across the bulk of the UK as we go through the end of the week and into the weekend’. 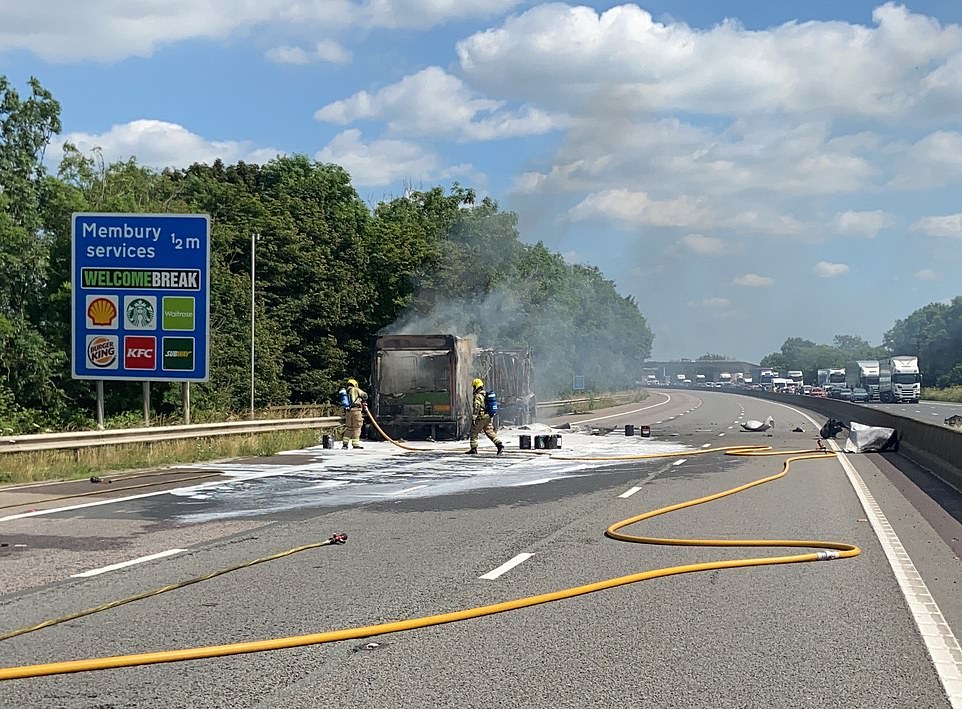 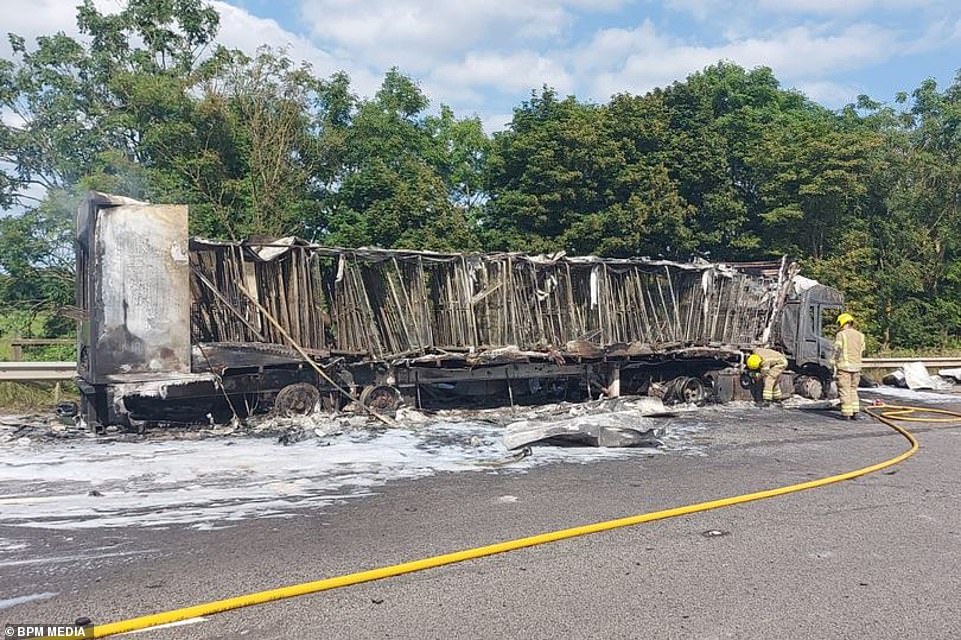 ‘Both carriageways have been closed for safety reasons. Police are working to release trapped traffic from the scene.

Dorset and Wiltshire Fire & Rescue Service also said: ‘We are currently dealing with a lorry fire on the M4 eastbound between J15 Swindon & J14 Hungerford.’

Highways England has since suggested that normal traffic conditions will not return until after 5pm.

It comes as temperatures across the UK began hotting up with some areas reaching stifling highs of 83F.

The UK could see the hottest day of the year so far with temperatures predicted to reach 87F this Sunday in parts of the UK – making it warmer than Ibiza.

Have you been caught up in the traffic chaos? Email: tips@dailymail.com