A man has been arrested after a Massachusetts mom shared Ring video on Facebook of a stranger who walked around her home uninvited for 16 minutes while her children were inside alone on July 11.

Esteban De Jesus Fronfrias-Soto, 26, of Worcester, Massachusetts, was arrested on a warrant for breaking and entering on Tuesday.

It came after Tarah Martell Schweitzer, 38, shared video of him walking through her home where her children were without her knowledge.

The mother-of-three was in the backyard of her Presidential Farms Neighborhood home with five other adults building a swing set while her young children and their friends played in the house.

The children eventually went into the backyard to tell the adults about the unknown guest. The adults didn’t believe the children at first and Schweitzer even jokingly warned her daughter Layla, 7, that the police were coming for her for lying.

As the children got more upset and insistent that they were telling the truth the concerned mother immediately called the police.

The children’s story was confirmed when they checked the Ring camera and saw that a stranger had walked into their home at 1:04 pm and walked out their front door at 1:20 pm.

The man walked up stairs and stood at the landing outside of one-year-old Max’s room while he was napping and looked out the palladium window.

Then Schweitzer’s eldest, Layla, and her cousin came out of the bathroom where they were playing with makeup and headed into her mother’s room to get more, passing the stranger twice. 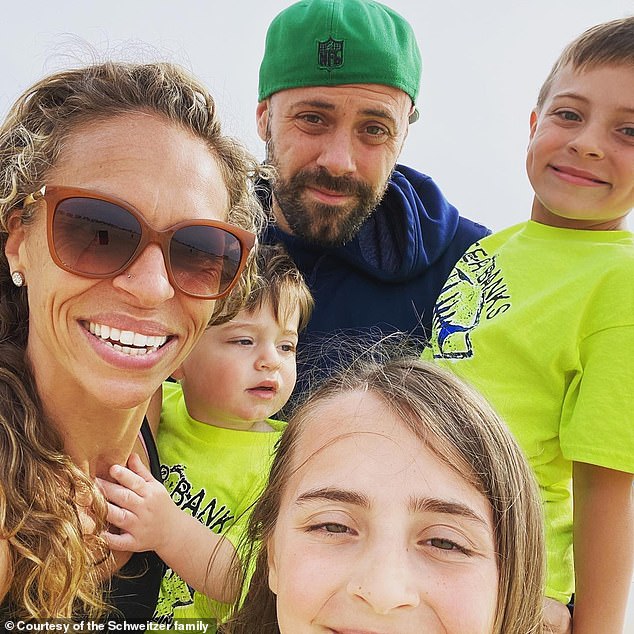 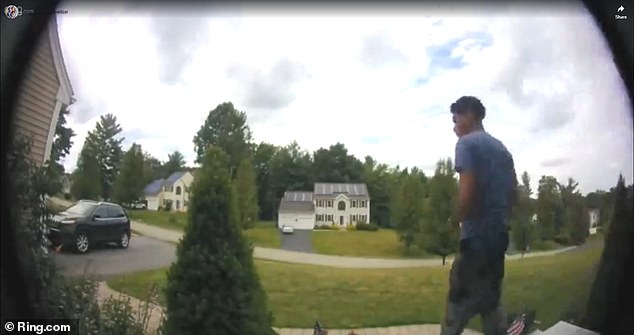 Tarah Martell Schweitzer, 38, posted the footage to her Facebook saying it made her feel sick to her stomach 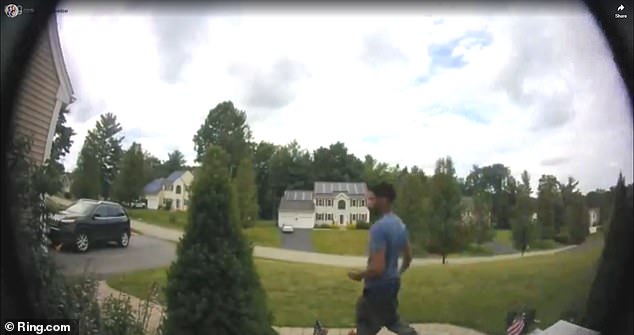 Blake, 5, stood at the bottom of the stairs making eye contact with the unknown guest as the intruder kneeled down to pet the dog. He eventually walked back out the front door without taking or saying anything.

Northbridge Police Department said Fronfrias -Soto was led to the residence by someone he believed was a woman he met on Snapchat, but realized he had be scammed and left the home.

He is being held at Northbridge Police Department on cash bail until he appears at Uxbridge District Court on Wednesday.

Schweitzer says that she normally feels ‘very safe in this neighborhood’ and describes it as ‘a community of families and people who we trust.’ It’s exactly because her neighborhood is normally so ‘safe and inviting’ that this ‘incident is mind blowing.’

A neighboring house’s alarm went off a few minutes later at 2:09 pm but the police have not connected it to Schweitzer’s intruder.

Schweitzer said she is adamant that she will be installing more security cameras in her house, but she does ‘think that this was an issue of him being at the wrong house.’

‘He didn’t engage with my children and didn’t take anything. I think he showed up to where he was told to go and it took him a bit to realize this wasn’t where he was supposed to be.’  She concludes, ‘There really is no other explanation.’

The Northbridge Police Department was unable to reached for a comment.