This is Anna Netrebko’s show, and she doesn’t disappoint. Netrebko has an irritating tendency to cancel, so it’s sometimes tempting to think of her as being as casual about her art as Angela Gheorghiu. But she isn’t. When she turns up she goes for it full throttle. And she certainly does here, with a compelling Lady Macbeth that earned first-night cheers throughout. 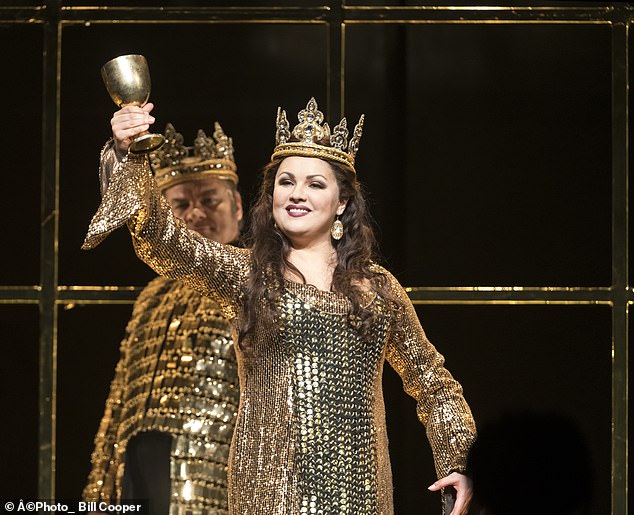 As Macbeth and his lady get married in glittering, golden costumes and climb up into their gold-encrusted cage (a gilded cage, geddit?) you know you’re not in for anything very subtle

It’s a role ideally suited to her dramatically as well as vocally. She’s a fine Verdi soprano in her prime, and there’s an intensity about everything she does that will surely transfer well to the big screen when this show arrives at a cinema near you on Wednesday. Not to be missed. Especially since Phyllida Lloyd’s 2002 production, now enjoying its third revival, is straightforwardly populist, as befits the director of Mamma Mia!

As Macbeth and his lady get married in glittering, golden costumes – the king and queen of bling – and climb up into their gold-encrusted cage (a gilded cage, geddit?) you know you’re not in for anything very subtle, but it’s undeniably effective.

The rest of the cast fit in pretty well, never jostling with Netrebko for primacy. Especially not her Macbeth, Zeljko Lucic – a solidly imposing fellow physically, with a pleasant voice, but almost entirely devoid of personality.

Much more charisma comes from Ildebrando D’Arcangelo as Banquo. You notice him in all he does, and rightly so, though these days his fine dark bass has issues with the lowest notes.

The other significant male singer, Azerbaijani tenor Yusif Eyvazov, making his Covent Garden debut as Macduff, seems way off the pace. Hard to know why he’s there, actually, until you realise, hey, he’s Mr Netrebko! Humouring the diva with a job for her hubby is OK when the role of Macduff is hardly pivotal. Not a habit to indulge in too often, though, when a major tenor is required.

Probably because of Netrebko’s presence, Antonio Pappano is in the pit, and everything is transformed. He’s a first-class Verdian, and not a phrase fails to emerge with total clarity and appropriate dramatic weight. As for his orchestra, yet again it sounds like a different band when he’s around.