Machete-wielding man sets woman on fire then torches himself

Two people are in critical condition after a machete-wielding man set a woman on fire and then torched himself in a horror attack.

Emergency services were called to a home in Benfleet, Essex, at around 11am after witnesses saw a man set a woman alight before pouring petrol on himself and doing the same.

One resident said: ‘A man walked up to a house, looking to attack someone, armed with a machete, and ended up finding a woman who he set on fire.

Two people are in critical condition after a machete-wielding man set a woman on fire and then torched himself in a horror attack in Benfleet, Essex (picture shows police cordon after attack)

‘He then went into the garden and set himself on fire. They both looked in a very bad way.

‘A woman then ran into the street screaming “help, help, someone’s set my mother in law on fire”. It was a horrific incident – really shocking.’

Another witness reported seeing a man with a machete who set a woman on fire before setting himself on fire. 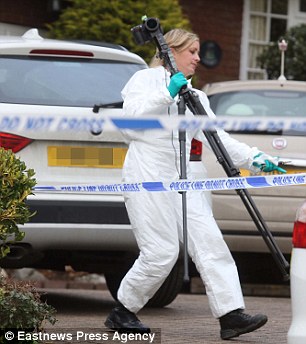 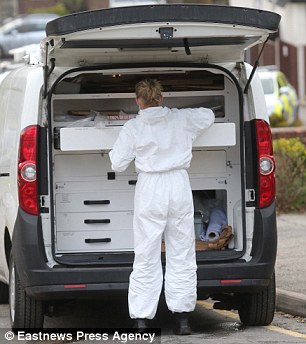 Air ambulances were spotted landing on a nearby green and a police cordon remains at the scene.

An Essex Police statement said: ‘Police received reports of a fire at a property in Boyce Green, Benfleet, at around 10.50am today (March 13).

‘Officers were called with reports that a man and a woman have suffered burns and have been taken to hospital in a critical condition. Enquiries are ongoing.’