Italian police say they have dismantled a sect that forced its members to follow a rigid macrobiotic diet and denied them contact with the outside world.

The ‘sect’ was reportedly run by Mario Pianese, a well known ‘macrobiotic guru’, who created the Ma-Pi 2 diet – initially intended to be used to combat Type 2 Diabetes.

The original goal of the diet appears to have gotten lost as members of the sect were on such a strict version of his Ma-Pi diet that the weight of one follower plunged to 77lbs (35kg).

Police said the probe began in 2013 after a young woman told police that Pianese had promised members of the sect, based in the central Marche and Emilia Romagna regions, that the diet would provide miracle cures.

Italian police say they have dismantled a sect that forced its members to follow a rigid macrobiotic diet and denied them contact with the outside world. Pictured, one of the girls who had to go on the diet and weighed just 35kg

Italian media reports that Pianese ran the sect like a ‘network’ where followers convinced others to adopt his version of a macrobiotic diet.

Authorities said that Pianese and other leaders turned their followers into virtual slaves, manipulating them to obtain donations and work for it practically for free.

Five persons, including Pianese and his wife, have been formally put under investigation for alleged maltreatment, tax evasion and criminal organization with the aim of reducing people to slavery. 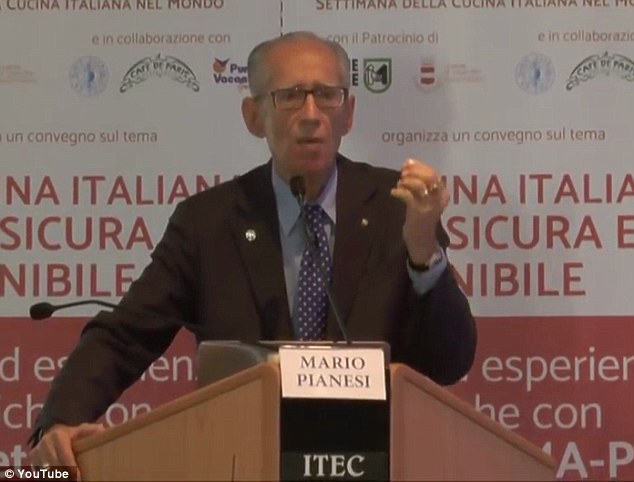 Diet or sect? The ‘sect’ in central Italy was reportedly run by diet guru Mario Pianese, whose Ma-Pi diet was designed to combat diabetes

This carbohydrate-heavy diet is mainly vegan, although some followers occasionally treat themselves to small portions of meat or fish  – organic only.

Half of the diet should be organic whole grains, such as brown rice, barley, oats and buckwheat. Up to a quarter should be fruits and vegetables – also organic.

Up to a quarter of the diet can be soups. These should be made from vegetables, seaweed, beans, pulses or miso.

It also prescribes a ‘holistic’ way of preparing food; no microwaves or electricity, only cook with purified water, and prepare your food in a calm environment using utensils made from natural materials – so no plastic bowls.

The macrobiotic diet completely bans any processed foods and foods with artificial ingredients, as well as caffeinated beverages or supplements.

Pianese’s Ma-Pi2 diet takes it a bit further, with half of the diet whole grains and 40 per cent vegetables – where carrots, savoy cabbage, chicory, onions, red radish and parsley are the approved list.

Around eight per cent can be legumes such as beans and lentils, and the dishes can be ‘seasoned’ with Asian fermented products such as miso and seaweeds.

Followers are advised to only drink caffeine-free green tea.