Emmanuel Macron has unveiled plans to offer London bankers French lessons in the latest phases of his ‘Operation le seduction’ Brexit raid on the City.

France will also pour more money into bilingual schools for children of English-speaking bankers and create a hotline to help them navigate the country’s education system.

And ministers have said they will also temporarily exempt foreign executives from having to pay into state pension scheme.

The fleet of measures have been unveiled as part of a French  charm offensive to lure lucrative business form London’s Square Mile across the Channel after we quit the EU.

It comes after Mr Macron threw a lavish party at the opulent Palace of Versailles on Monday night for 140 top executives from some of the world’s biggest firms.

The French President spoke in English as he schmoozed with bosses from firms including JP Morgan, Google and Facebook at the famous chateau.

And as the French try to lure Britain’s businesses away, the country is also encroaching on the UK’s special relationship with the US.

Mr Macron is reportedly set to be the first leader invited on a state visit by Donald Trump – beating Theresa May to the honour.

On Monday’ night’s extravagant soiree at Versailles – once home to the French ‘Sun King’ Louis XIV – the world’s corporate elite were wined and dined by over a dozen French ministers.

They were hosted in the  Galerie des Batailles, the grandest chamber in the palace which is lines with paintings glorifying French military victories across the centuries. 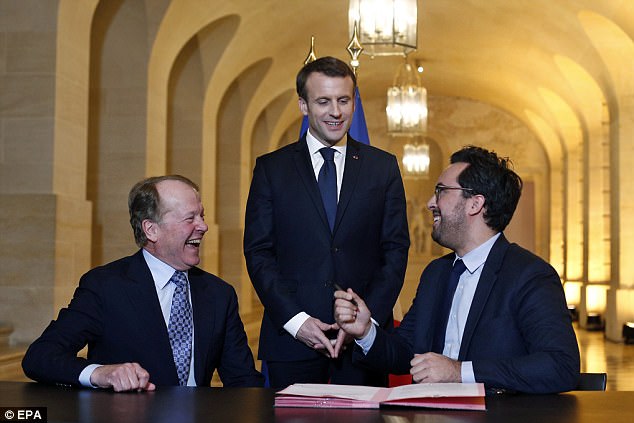 And they feasted on dinner prepared by the top chef Alain Ducasse, who has been dubbed the ’emperor of French cooking’ and holds the maximum three Michelin stars.

French aides told reporters the lavish gathering was part of their drive to swoop in on businesses based in London after Brexit.

It was described as a ‘mini Davos’ as many of the business chiefs were stopping off on their way to the global business summit in the Swiss Alps.

Speaking during his visit to London last week, Mr Macron said France is in a ‘competition’ with other EU countries to try to swipe business from London.

He told the BBC’s Andrew Marr Show: ‘Sure we want to attract maximum activity, why? Because this decision has an impact for a lot of players. 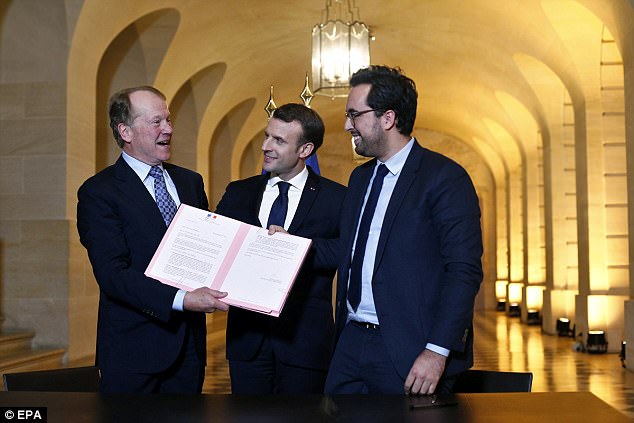 Rival financial centres like Paris, Frankfurt and Amsterdam are desperately trying to attract some of the City of London’s booming businesses.

And recognising that English is the language of international business, it has proposed a new English-language commercial tribunal.

All of the business guests had to bring along a plan for investment in France in order to attend the party.