Emmanuel Macron is urging EU leaders to cut a deal with Britain in a lifeline for Theresa May as she tries to avoid a no-deal Brexit, it was reported last night.

Mr Macron’s vision for Europe would involve ‘concentric circles’ with eurozone nations in the inner ring and Britain in a second, The Times reports.

It came after the EU’s chief negotiator Michel Barnier promised a ‘partnership with Britain such as has never been with any other third country’.

Emmanuel Macron, pictured on Monday, will reportedly tell European leaders that a cliff-edge exit would ‘break links and poison relations’ between EU countries

Diplomatic sources apparently said Mr Macron would use a summit in Austria next month to say that a hard Brexit would endanger European ties and his model for various ‘circles’ in Europe.

A source said: ‘He sees a no-deal scenario as something that would break links and poison relations at a time when Europe needs to be united beyond the EU.’

At a meeting on Mr Macron’s holiday resort earlier this month the PM said Brussels faced a choice of a ‘Chequers deal or no deal’.

Speaking to France’s largest employer federation Mr Lidington said: ‘We face the choice between the pragmatic proposals we are discussing now with the European Commission or no deal.

‘The alternative models do not meet the level of ambition or the outcome we all want to see delivered. 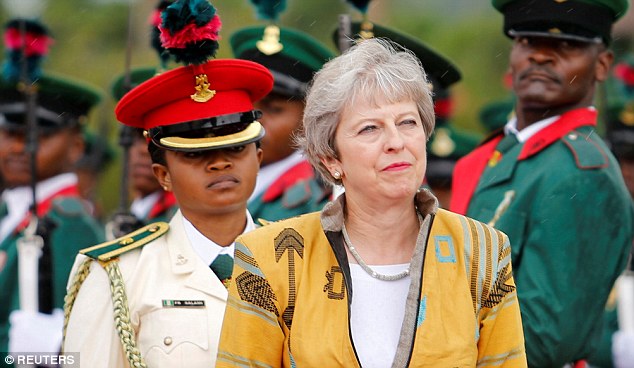 ‘So we need the EU to engage with us on our positive vision of the future relationship.’

Addressing peers, Mr Raab said he would be in Brussels tomorrow ahead of meetings on Friday, adding: ‘I’m confident that a deal is within our sights.

‘We’re bringing ambition, pragmatism, energy and if, and I expect it will be, and if it is matched, we get a deal.’

Mr Barnier told reporters in Berlin: ‘We are prepared to offer Britain a partnership such as there never has been with any other third country.’

However the Brussels negotiator still insisted Britain cannot have an ‘a la carte’ choice of benefits from the EU single market.