Emmanuel Macron told Saudi Arabia’s crown Prince he was ‘worried’ during a conversation about the murder of journalist Jamal Khashoggi and the ongoing Yemen war.

The French President was recorded expressing his concern to Mohammed bin Salman at the G20 summit in Argentina.

In audio of the conversation, the Saudi royal can be heard saying ‘Don’t worry,’ to which Macron replies: ‘I am worried’.

The pair spoke in hushed tones and kept their heads close together as they tried to have the private conversation on the sidelines of the summit.

Mr Macron looked rather sternly at the crown prince, while the Saudi nodded his  head and smiled.

Later in the one-minute clip posted on Twitter, Mr Macron says: ‘You never listen to me,’ and Prince Mohammed replies: ‘I will listen, of course.’

At the end of the video, Mr Macron can be heard saying: ‘I am a man of my word.’

French officials said the video showed ‘a sort of contrast between MbS’s face sporting an embarrassed smile and the [French] president’s face, which was rather stern, and was keen to convey these messages in a very firm manner.’

As soon as the crown prince arrived at the G20 summit he was confronted by the French President, who pressed him on the Khashoggi investigation and the Saudi-backed war in Yemen. 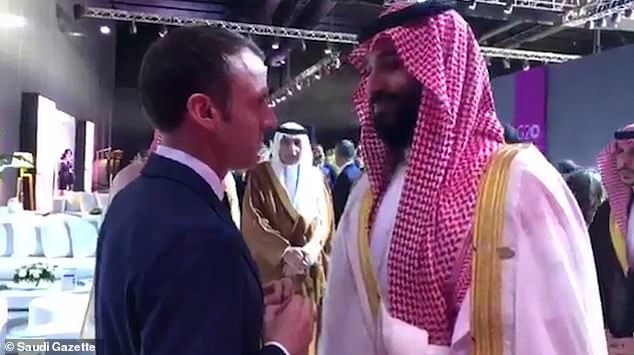 Saudi Arabia has denied that bin Salman played a role in Mr Khashoggi’s death, but some leaders may be cool toward him to avoid seeming to legitimize a man who US intelligence agencies concluded ordered the killing.

Trump’s administration has made clear it does not want to torpedo the longstanding US relationship with Riyadh, however.

It is the prince’s first significant appearance overseas since the killing. Turkish President Recep Tayyip Erdogan, who has been sharply critical of Saudi Arabia over the incident, is also in attendance. 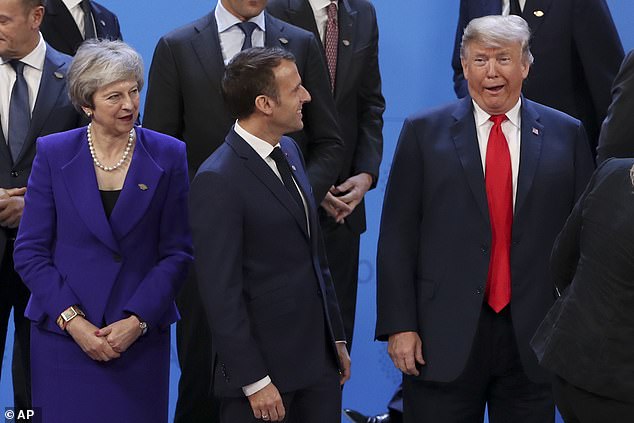 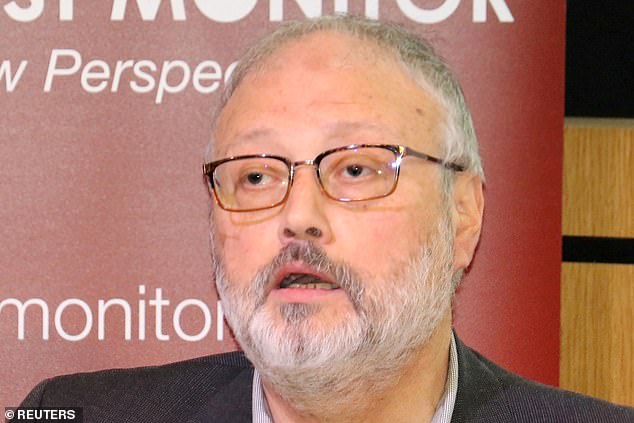 The only other prime minister to visit the country was Tony Blair, who went to Puerto Iguazu in 2001.

Mrs May said she intended to use the summit to sell the vision of a ‘global Britain’ after Brexit.

Both Macron and Mrs May said they were raising the killing of Khashoggi during meetings with the 33-year-old prince.

The French presidency said that Macron had also spoken to the crown prince about the Saudi-led offensive in Yemen, where millions are on the brink of starvation in what the United Nations calls the world’s worst humanitarian crisis.

Macron told Prince Mohammed that Europeans wanted international investigators to take part in the probe on Khashoggi’s death and stressed ‘the necessity of a political solution in Yemen,’ the Elysee Palace said.

Speaking to Sky News before the summit, Mrs May said she would press both on Yemen and Khashoggi.

‘The Saudi Arabians need to ensure that their investigation is a full investigation, that it’s credible, that it’s transparent, and that people can have confidence in the outcome of it, and that those responsible are held to account,’ the prime minister said.