Emmanuel Macron insisted Britain would ‘for sure’ be allowed to reverse the Brexit decision today as he resumed his attack on Eurosceptic ‘lies’ in the referendum.

The French president risked wading back into UK politics by saying leaving the EU was more ‘complicated’ than voters had thought.

The intervention will heap fresh pressure on Theresa May as she desperately struggles to find a way through the Brexit impasse.

The PM is facing calls from within Cabinet to consider a Canada-style trade deal with the EU if her Chequers plan fails.

Meanwhile, Jeremy Corbyn has issued an ultimatum that Labour will oppose any agreement that does not include a customs union – a red line for Mrs May.

Emmanuel Macron (pictured right chatting with Theresa May, centre, and Belgian premier Charles Michel in New York last night) said the UK would ‘for sure’ be welcomed back into the EU if it reversed the Brexit decision 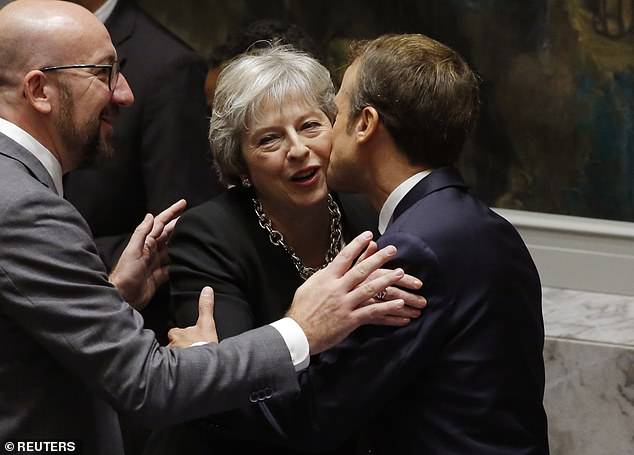 At a UN meeting in New York last night, Theresa May and Mr Macron were seen exchanging kisses of greeting despite tensions over Brexit

Mr Macron – who led a brutal assault by EU leaders on Mrs May’s Chequers plan  at last week’s Salzburg summit – launched his latest salvo in an interview with Bloomberg.

Speaking at a climate meeting in New York, he was asked whether the bloc would ‘have the UK back’ if it decided not to go ahead with Brexit.

‘For sure,’ he replied, while stressing that it was not an issue for him to decide whether Britain changed its position and he ‘respected the choice’ of voters.

EU says it will ‘keep calm and keep negotiation’ on Brexit

The EU commission says it will ‘keep calm and keep negotiating’ despite growing fears over a no-deal Brexit.

He told journalists at a regular briefing that although the commission was getting ready for all outcomes, the focus was still on getting an agreement.

Pressed whether abandoning Brexit would mean giving up the opportunity of luring London bankers to Paris, Mr Macron said: ‘This is about history, not about domestic interests…

‘I did regret this vote for the rest of Europe and for our very special relationship (with Britain).’

Mr Macron also resumed his assault on the Leave campaign ‘lies’ during the referendum two years ago.

‘It costs a lot, it’s much more complicated than they initially thought,’ he said.

The remarks will heighten tensions amid claims senior Tories including Sajid Javid, Michael Gove, Jeremy Hunt and Dominic Raab harbour doubts over the PM’s insistence that no deal is the only alternative to her blueprint.

They are keen to avoid a situation where the EU rejects the Chequers proposal at a crunch summit next months and negotiations essentially collapse without a ‘Plan B’.

However, the group have not presented any new solutions to the issue of the Irish border, according to The Times.

With just weeks left to break the deadlock in negotiations, Mr Corbyn is also holding talks Michel Barnier in Brussels amid mounting fears anything that emerges will be blocked by Parliament.

Mr Corbyn said he would be urging Mr Barnier and his team to do ‘all they can’ to avoid a no-deal Brexit. 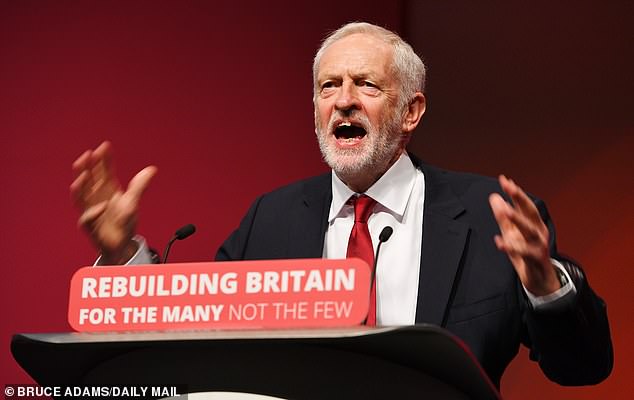 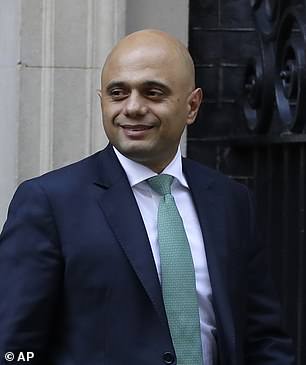 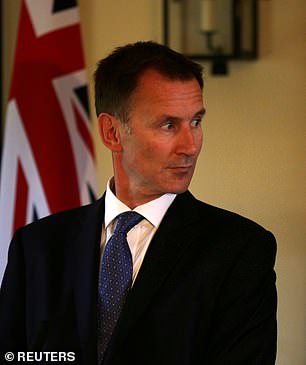 The EU side apparently requested the meeting after learning that Mr Corbyn was coming to Brussels to attend the naming of a square after murdered Labour MP Jo Cox.

The encounter will raise anxiety among Brexiteers that Mr Corbyn is plotting with the EU to frustrate the UK’s departure.

The veteran left-winger used his party conference speech yesterday to insist Mrs May must call a general election unless she is prepared to drop her red line against joining a customs union with the EU.

Mr Corbyn couched his demand as ‘reaching out’ to the PM to get a ‘sensible deal’ through parliament – but it was denounced by Tories as a naked attempt to gain power.

Mrs May says a customs union would deny Britain the opportunity to strike trade deals around the world.

Accepting the idea would almost certainly spell the end of Mrs May’s time in Downing Street and plunge the Tories into turmoil, making an election and Corbyn government much more likely.

Labour has set six tests for a Brexit deal – including securing the ‘exact same benefits’ – that seem designed to be impossible to pass.

The conference also agreed that if the party cannot force an election, the option of holding a referendum should be kept ‘on the table’.

Mrs May and Mr Macron looked to have buried the hatchet at a UN meeting in New York last night after their explosive fallout over Brexit.

The two leaders were seen exchanging kisses of greeting before laughing and joking alongside Belgian premier Charles Michel.

The warm scenes were a million miles from the Salzburg summit last week – when Mr Macron led a brutal assault on Mrs May’s Chequers plan for Brexit.

The PM had hoped to get a signal from her EU counterparts that they were close to a deal on the future relationship.

But instead the Frenchman pushed his colleagues into issuing a blunt statement that Mrs May’s blueprint ‘will not work’ as it would undermine the single market. 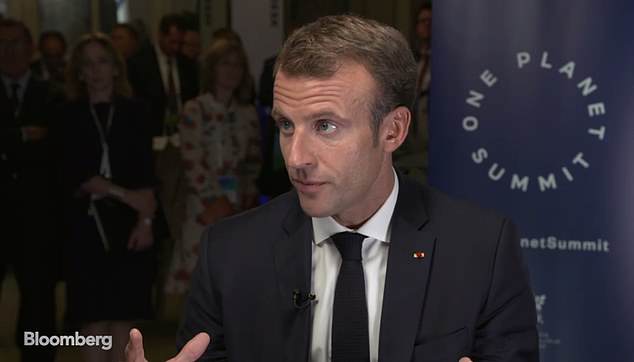 In a Bloomberg interview in New York (pictured), The French president risked wading back into UK politics despite facing a furious backlash over his meddling at last week’s Salzburg summit

He then flouted diplomatic convention by wading into UK politics, delivering an extraordinary rant about how the British public had been tricked by ‘liars’ during the referendum in 2016.

The backlash left Mrs May visibly shaken in Salzburg, before she regrouped and made her own defiant statement from No10 accusing her colleagues of lacking ‘respect’ for the UK.

Despite the more cordial tone of their encounter in New York yesterday, there is little sign that Mr Macron is minded to back down in his condemnation of Mrs May’s blueprint – which would effectively keep Britain in the single market for goods.

He is said to have threatened to boycott a looming summit in November that could seal a deal unless the the PM bows to demands over the Irish border.

The EU insists Northern Ireland must stay within its customs union to avoid a hard border – but Mrs May says this is totally unacceptable as it would split the UK.

How does Theresa May’s Chequers deal compare with a Canada-style free trade deal?

Britain would stick to EU rules on goods by adopting a ‘Common rulebook’ with Brussels, but in the services sector.

Theresa May says this would allow the UK strike free trade deals globally, but the scope would be limited by commitments to the EU.

The blueprint should minimise the need for extra checks at the borders – protecting the ‘just in time’ systems used by the car industry to import and export parts.

The UK Parliament could choose to diverge from these EU rules over time.

But there is an admission that this would ‘have consequences’.

Britain would set up something called a Facilitated Customs Arrangement.

This would see the UK effectively act as the EU’s taxman – using British officials to collect customs which would then be paid on to the bloc.

The borders between the UK and EU will be treated as a ‘combined customs territory’.

The UK would apply domestic tariffs and trade policies for goods intended for the UK, but charge EU tariffs and their equivalents for goods which will end up heading into the EU.

Mrs May says her plan will prevent a hard Irish border, and mean no divergence between Northern Ireland and mainland Britain.

There would be no need for extra border checks, as tariffs on goods would be the same.

Britain would strike a Canada-style free trade deal with the EU, meaning goods can flow both ways without tariffs.

As it is a simple free trade deal, Britain would not be bound by the rules and red tape drawn up in Brussels.

The arrangement would be a relatively clean break from the EU – but would fall far short of full access to the single market.

Eurosceptics have suggested ‘Canada plus’ in key areas such as services and mutual recognition of standards.

The UK would have broad scope to strike free trade deals around the world.

Technology would be used to avoid extra customs checks on the borders.

As a result goods travelling into the UK from the EU and vice versa would be tracked and customs paid without extra checks.

The EU has suggested this is ‘magical thinking’.

The EU says the Canada model would mean border controls are required between Northern Ireland and the Republic to protect the single market and customs union.

It insists Northern Ireland must stay in the bloc’s customs jurisdiction in order to prevent that.

Mrs May has signalled she agrees with the analysis – seemingly the reason she is reluctant to go down this route.

But Brexiteers point out that there is already a tax border between the UK and Ireland, and say technology and trusted trader schemes can avoid the need for more infrastructure.