Emmanuel Macron has taken a parting shot at Donald Trump and said it is ‘insane’ the US is pulling out of international treaties while predicting the President would kill the Iran deal.

The French leader said Trump would get out of the Iran deal for ‘domestic reasons’ and accused the US of short-termism by threatening to withdraw from treaties it had only just joined.

His comments came at the end of a high-profile state visit which saw Macron and Trump lavish each other with compliments and praise the warm relationship between their two countries. 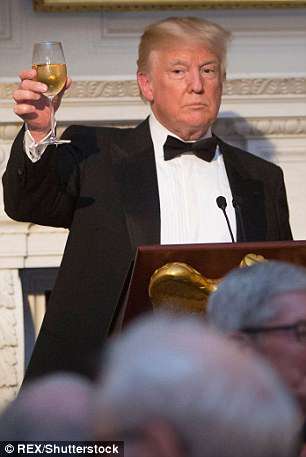 ‘My view — I don’t know what your president will decide — is that he will get rid of this deal on his own, for domestic reasons,’ Macron told around a dozen reporters at George Washington University on Wednesday, according to CBS.

Addressing the US President’s approach of pulling out of treaties the country had recently joined, he added: ‘It can work in the short term but it’s very insane in the medium to long term,’ he said of the US decision ‘to change [its] opposition so often.’